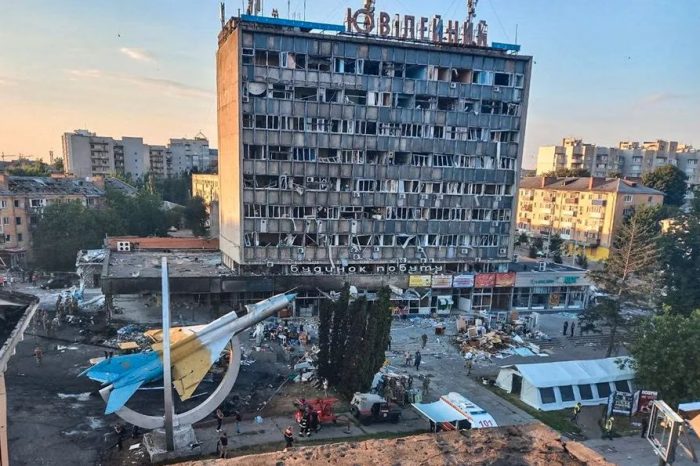 Russian troops continue attacks in eastern Ukraine on the Siversk-Bakhmut line and near Sloviansk, using artillery, aviation, and missile weapons. They have also stepped up rocket strikes against civilian infrastructure in central Ukraine. A rocket attack on Vinnytsia on July 14 resulted in numerous civilian casualties, including children.

Russian Federation troops conducted offensives to seize the Vuhlehirsk thermal power plant, Siversk, and Bakhmut; they attempted to gain control of the Bakhmut-Lysychansk road. On the Sloviansk direction, they seek to improve their tactical position, preparing for an offensive on the Sloviansk-Kramatorsk agglomeration.

Russian troops hold their positions near Kharkiv. Shelling of the city and other districts of the region persists. As a result, several educational facilities in Kharkiv were damaged. The shelling of the town of Chuhuiv on July 15 killed 3 people and wounded 3 more.

Systematic shelling continues on the front line in Zaporizhzhia region. As a result of the Russian military’s use of MLRS, there are fires on agricultural land.

The Ukrainian military is striking positions and rear facilities of Russian troops in the temporarily occupied Kherson region. Several ammunition depots of the Russian Armed Forces have been destroyed. The destruction of the enemy’s rear infrastructure is a sign that the Ukrainian Armed Forces are preparing for a counterattack.

Under these conditions, Russian troops are stepping up their defense around Kherson. They are striking military and civilian infrastructure in the Kryvyi Rih and Mykolaiv directions, trying to obstruct the preparation of the Ukrainian Armed Forces to liberate the city.

Constant rocket attacks on Mykolaiv continue. In particular, on July 14, nine rockets were fired into the city, damaging infrastructure as a result. The next day, two local university buildings were damaged in the strike. The Security Service of Ukraine detained the fire spotters in Mykolaiv. But this did not prevent further strikes against the city.

On the morning of July 14, a missile strike was launched against Vinnytsia. Some of the missiles were shot down, however, others hit civilian objects in the center of the city. As a result of the strike 24 people (including 3 children) were killed and 68 others were injured. According to President Volodymyr Zelenskyi, this act proves that Russia poses a terrorist threat and must be recognized as a terrorist state.

Constant shelling of the border areas of Sumy and Chernihiv regions persists. Russian troops are striking infrastructure and residential buildings in Dnipropetrovsk region. They shelled the Nikopol area; as a result, at least 2 people were killed and 1 person was injured. In addition, on the evening of July 15, there was a missile strike on Dnipro. Some of the missiles were intercepted by Ukrainian air defenses, but others hit objects in the city, in particular the Pivdennyi Machine-Building Plant, Ukraine’s leading enterprise for the production of rocket and space equipment. As a result, according to preliminary data, 3 people were killed and 15 injured. At the same time, a missile was fired at Kremenchuk in the Poltava region, but was intercepted by the anti-aircraft defense. On the evening of July 16, a missile strike was launched against the territory of Cherkasy region.

According to the Office of the Prosecutor General, as of the morning of July 17, more than 1,015 children in Ukraine suffered as a result of the armed aggression of the Russian Federation (353 children were killed, 662 were wounded).

Human Rights Watch documented nine cases of civilians being detained by the Russian military during the occupation of the Kyiv region, which violates the principles of international law.

Former captives (both civilians and combatants) released and returned to Ukraine in a prisoner exchange report on the torture and cruel treatment they experienced in Russian captivity. Evidence of the brutal treatment of prisoners and illegally detained persons by the Russian military is the case of Paul Urey, a British citizen and humanitarian organization employee, who died in captivity.

Andrii Niebytov, head of the Main Department of the National Police in the Kyiv region, revealed that 1,346 bodies of civilians killed by the Russian military have already been discovered in the Kyiv region; about 300 more people have been reported missing.

Due to active hostilities near Sviatohirsk, the issue of evacuating civilians who had taken refuge on the territory of the local monastery is becoming more urgent. Seven people were evacuated from the church complex under constant shelling.

Resistance is becoming more active in the temporarily occupied territories of the Donetsk region. In Mariupol, a fire was recorded at the Satellite factory, which probably was started by members of the resistance movement.

The Ukrainian Agribusiness Club association reported that agricultural producers need additional financing of about $9 billion over the next 12 months to conduct this year’s harvest, pay rents to land share owners and sow crops for next year’s harvest.

Ukrainian President Volodymyr Zelenskyi has removed Prosecutor General Iryna Venediktova from her post and dismissed Ivan Bakanov from his position as Chairman of the Security Service of Ukraine. The decision about the latter was made with reference to Article 47 of the Disciplinary Statute of the Armed Forces of Ukraine – non-performance (improper performance) of official duties that caused human casualties or other serious consequences. The reason was the unsatisfactory work of the SSU and cases of betrayal of employees of the Service. An example of this is the detention of the former head of the SSU department in Crimea, Oleh Kulinich, who is charged with several articles of the Criminal Code, including high treason.

Ukraine continues to meet the requirements of the European Commission to implement internal reforms aimed at ensuring the compliance of the state with the EU criteria. First of all, the point is to ensure the independence of the justice system and fight against corruption. The Ukrainian President said that the results of the competitive selection for the position of the head of the Specialized Anti-Corruption Prosecution Service should be approved as soon as possible and a competition for the selection of the new head of the National Anti-Corruption Bureau of Ukraine should be held.

Representatives of the Ukrainian government continue to maintain an international dialogue with Western partners in order to further support Ukraine on the part of the latter. Ukrainian Prime Minister Denys Shmyhal and EU High Representative for Foreign Affairs and Security Policy Josep Borrell discussed further steps for Ukraine’s integration into the EU. Shmyhal noted that Ukraine will move ahead in an accelerated procedure of approximation of Ukrainian legislation to that of the EU and is ready for integration into the EU internal market. Also the sides discussed strengthening of cooperation in the energy sphere, European assistance in de-mining of Ukrainian territories and inclusion of the Ukrainian part of the Danube in the Trans-European Transport Network (TEN-T). Ukrainian President Volodymyr Zelenskyi spoke with Canadian Prime Minister Justin Trudeau, thanking him for his continued strong defense support and stressing the need for a principled international stance on sanctions. The latter issue is particularly relevant because of Canada’s decision to make an exception for servicing Russian turbines intended for the Nord Stream 1 gas pipeline. This looks like a weakening of the sanctions regime against Russia and causes criticism from Kyiv.

On July 15-16, a meeting of the finance ministers and central bankers of the G-20 countries was held in Indonesia, where it was planned to jointly address the issue of rising commodity prices, escalating food security crisis and spillover effects on the ability of low-income countries to pay debts. Ukrainian Finance Minister Serhii Marchenko attended the meeting, calling on G20 leaders to join forces to stop Russia’s actions in worsening the global crisis. The meeting did not result in an official communiqué because of the participants’ different positions on Russia’s war against Ukraine.

An international conference was held in The Hague to coordinate the international community’s efforts to investigate the crimes committed by Russia in Ukraine and to ensure justice. The 45 countries participating in the conference agreed on a Political Declaration of Cooperation to achieve a common result. In addition, the Dialogue Group on Accountability for Ukraine was created to bring together national, European and international initiatives to document and ensure justice for international crimes. Ukrainian President Volodymyr Zelenskyi, during an online speech at the event, called for the creation of a special instrument to compensate all losses from Russian aggression.

Western countries support Ukraine in investigating Russian war crimes. Germany will allocate additional funding to the International Criminal Court and send its experts to work in this direction. The UK government has announced a package of assistance to the Office of the Prosecutor General of Ukraine to investigate crimes related to Russian aggression. The Netherlands will allocate funds for the work of the International Criminal Court and the UN Human Rights Office in Ukraine.

On July 15, the European Commission supported a proposal to introduce a new, the seventh, package of sanctions against Russia. In particular, it provides for a ban on imports of Russian gold, increased control over exports of dual-use goods and advanced technologies, as well as strengthening the alignment of EU sanctions with the sanctions of the G7 countries. The European Commission also proposes to extend sanctions of the previous six packages until January 2023.

Meanwhile, Europe is trying to get rid of dependence on Russian energy resources. The European Commission proposed that EU states enter into an agreement with Azerbaijan to increase natural gas imports and expand the pipeline to do so.

Partners continue to provide military support to Ukraine. Defense Minister of Ukraine Oleksii Reznikov announced the arrival of the first M270 MLRSs in Ukraine. Along with HIMARS systems, they will be used for high-precision strikes against Russian troops.