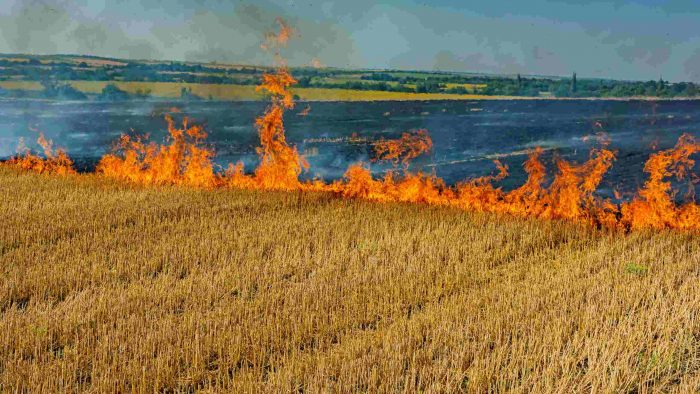 Russian troops are regrouping and replenishing their own units, conducting covert mobilization in Russian regions. They continue to apply pressure in key areas (in the north of the Donetsk region, near Kharkiv), while simultaneously using aviation and artillery along the entire front line. The Armed Forces of Ukraine use the situation to undermine the Russian contingent’s potential for active action. Over the past three weeks, Ukrainian artillery has destroyed five command posts and about 30 ammunition depots of the Russian Federation. These attacks have become more intense particularly in the southern direction, in the vicinity of Kherson.

The intensity of Russian attacks decreased as a result of continued regrouping of their forces and successful strikes by the Ukrainian Armed Forces against ammunition depots in the temporarily occupied territories. Local Russian attacks are taking place in the Marinka area (near Donetsk), Sloviansk and Siversk, with the Ukrainian military effectively defending itself.

The Russian army persists in shelling Donetsk region, destroying residential facilities and civilian infrastructure. Between 11 and 13 July, at least 8 people were killed and 15 injured in the region. The casualty count continues for the Russian strike on the town of Chasiv Yar on July 9. According to the latest information, 48 people were killed there.

The Armed Forces of Ukraine are destroying Russian ammunition depots in the occupied parts of Donetsk and Luhansk regions. In addition, there was a strike on the air defense base of Russian troops in the city of Luhansk itself.

In the vicinity of Kharkiv, Russian troops hold the occupied lines and carry out local attacks in order to improve the tactical situation. The shelling of residential areas of the city is ongoing. In particular, 6 people were killed and 31 more people (including 2 children) were wounded in Kharkiv on July 11 alone. In addition, at least 3 people have been killed and 10 civilians injured in the region in recent days.

Russian troops keep shelling civilian infrastructure in Zaporizhzhia region. As a result of their actions, more than 600 hectares of crops were destroyed in just one day on July 12. There was a missile strike on Zaporizhzhia, which resulted in damage to an industrial enterprise. According to preliminary reports, 14 people were injured as a result of the attack.

Russian troops continue shelling the Mykolayiv region. On the morning of July 12, a missile strike on Mykolaiv damaged the city’s medical infrastructure and residential buildings. In recent days at least 5 people have been killed and 12 wounded in the region according to preliminary data.

In the Kherson region, the Ukrainian Armed Forces destroyed ammunition depots of Russian troops, which supplied their grouping on the right bank of the Dnipro River (Kryvyi Rih and Mykolaiv directions).

Russian troops shelled the territory of Dnipropetrovsk region from MLRS and launched a rocket attack on Odesa region. In the north of Ukraine, shelling of the border areas of Sumy and Chernihiv regions continues.

In the information space, there is an intensification of narratives that are critical to the continuation of Ukraine’s successful military confrontation with the Russian invasion. Separate statements (by Republican member of the US House of Representatives Victoria Spartz) and publications (Financial Times, Foreign Affairs) are directly or indirectly aimed at discrediting Western arms deliveries to Ukraine. Such actions obviously benefit the Russian Federation, which is trying to undermine Ukraine’s image in the world and stop the process of providing military assistance to Ukraine by its partners.

According to the Office of the UN High Commissioner for Human Rights, as of July 12, the number of civilian casualties in Ukraine since the start of the large-scale Russian invasion is at least 11,544 (5,024 killed and 6,520 wounded). As of the morning of July 13, more than 1,001 children (349 children killed, 652 wounded) had suffered as a result of the armed aggression of the Russian Federation in Ukraine.

Oleh Kotenko, Commissioner for Missing Persons in the Ministry of Reintegration, reported that in accordance with the norms of the Geneva Convention, Ukraine returned the bodies of 30 dead Ukrainian soldiers in the Zaporizhzhia region on July 12. The release of Ukrainians from Russian captivity also continues. The Main Directorate of Intelligence of the Ministry of Defence of Ukraine reported the release of 5 Ukrainian citizens as a result of a special operation in the temporarily occupied territory of Kherson region.

Russian Federation proceeds with deportation of Ukrainian citizens. President Volodymyr Zelenskyi informed that so far 2 million residents of the temporarily occupied territories of Ukraine, including several hundred thousand children, have been deported to the Russian Federation. They are forced to undergo checks in so-called filtration camps, where they have their documents taken away and are intimidated. Ukrainian citizens are then transported to remote areas of Russia to make it as difficult as possible for them to return home.

Overall, more than 11.5 million people have been displaced from their homes in Ukraine since the Russian invasion began on February 24; some 6.3 million Ukrainians are internally displaced. The UN refugee agency warns that it is difficult for people to rebuild their destroyed homes for the winter, reunite with their families, and recover from the trauma of more than four months of war. The agency also noted restrictions on electricity and water supplies and access to medical services in the zone of active fighting.

Russia steals Ukrainian grain from the temporarily occupied territories. For this purpose, the Russian military uses stolen equipment of Ukrainian agricultural companies. In addition, through their actions, they are destroying the products of the Ukrainian agricultural complex. Since the beginning of the full-scale invasion, 3,000 fires have been recorded on more than 1.5 million hectares; more than a third of them, or 690,000 hectares, is agricultural land. With about 350,000 hectares of wheat and barley fields destroyed, there are risks of rising world prices for sunflower oil and other products.

In the Kharkiv region, the Russian-appointed head of the local administration was blown up. In Melitopol (Zaporizhzhia region) and Kherson, attempts were recorded to assassinate the leadership of the occupation administrations.

Valdis Dombrovskis, Vice President of the European Commission, announced on July 12 that the EU Council supported the allocation of €1 billion of macrofinancial assistance to support the economy in war conditions. The press service of the European Commission also noted that work on the allocation of the second tranche of €8 billion is currently underway.

According to Oleh Ustenko, Economic Advisor to the Ukrainian President, Ukraine demands $9 billion per month to cover the budget deficit. This figure is significantly higher than previous requests of $5 billion voiced by the Ministry of Finance. According to Ustenko, an additional $4 billion a month over the next three months should compensate for emergency housing and home repairs; financial support for people who have lost their jobs.

On July 11, Naftogaz of Ukraine, Ukraine’s leading fuel and energy company, asked its investors to restructure its $350 million Eurobond debt. Thus, Naftogaz comes close to default for the first time in 13 years should the investors fail to meet the company’s demands.

Permanent support from partner countries is an important sign of solidarity for Ukraine. Ukrainian President Volodymyr Zelenskyi held a meeting with Deputy Prime Minister and Minister of National Defense of the Republic of Poland Mariusz Błaszczak, after which it was announced that Ukraine had received another batch of Polish-made Krab self-propelled artillery units. Also Volodymyr Zelenskyi held a meeting with Prime Minister of the Kingdom of the Netherlands Mark Rutte. The sides discussed the situation on the frontline and options for its development. The Ukrainian president noted the decision of the Dutch government to provide Ukraine with additional heavy weapons, and Mark Rutte noted the Netherlands’ continued economic, defence and political support to Ukraine.

Drawing the attention of Asian countries to the situation in Ukraine is of great importance. Volodymyr Zelenskyi spoke at the Asian Leadership Conference in Seoul, where he raised issues of Ukrainian interests and values, and expressed gratitude for the support in standing up to Russian aggression. On the other hand, Ukraine severed diplomatic relations with the DPRK in response to Pyongyang’s recognition of the so-called “independence” of the “Donetsk and Luhansk People’s Republics”.

Attempts continue to resolve the global food crisis by unblocking Ukrainian Black Sea ports and resuming exports of Ukrainian agricultural products. On July 13, delegations of the defense ministries of Turkey, Ukraine and Russia, as well as a UN delegation, met in Istanbul on the issue of grain exports from Ukraine via the sea route. As a result of the meeting, an agreement was reached on basic technical issues, such as the establishment of a coordination center in Istanbul, joint control at the exit and arrival points, as well as ensuring the safety of navigation on the crossing routes. U.N. Secretary-General António Guterres called the meeting an important and substantive step toward a comprehensive agreement that should permanently resolve the problem.

As a result of a vote at the annual MIP Steering Group meeting, on July 12, Ukraine was accepted into the Multilateral Interoperability Programme (MIP), which implements technological cooperation among the armies of NATO member states. Now Ukraine has the right to jointly develop and make changes to key NATO standards concerning the interoperability of combat control systems and related standards. In addition, Ukrainian Defense Minister Oleksii Reznikov and German Defense Minister Christine Lambrecht held an online meeting on July 12 in which they discussed the German supply of weapons that could help strengthen Ukraine’s defense capabilities.

Economic and financial assistance to Ukraine from partners is being strengthened. Through the IMF Administered Account, the state will receive a €200 million interest-free loan from the government of the Italian Republic. The funds will be used to finance the salaries of teachers in general secondary education institutions.

The Government of Canada decided to allow repairs of Russian turbines used for the Nord Stream-1 gas pipeline in Canada for the next two years. Such actions help ensure gas supplies to Europe, but are a dangerous practice of creating exemptions from the sanctions regime applied against the Russian Federation and proves the effectiveness of Russian energy blackmail.