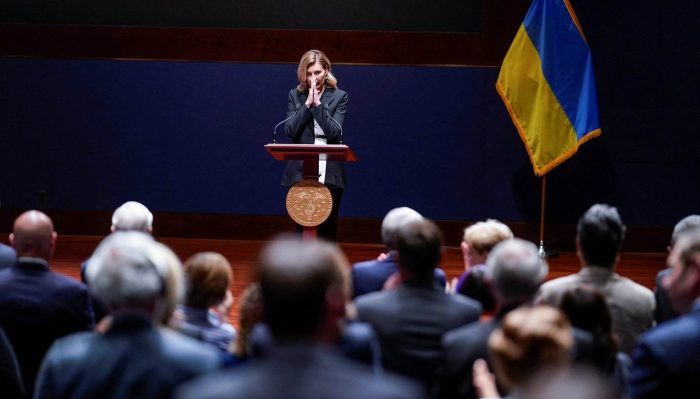 Russian forces are conducting limited offensive operations in the Donbas in the directions of Bakhmut-Siversk and Sloviansk-Kramatorsk. They keep launching intensive strikes along the entire front line, using artillery and aviation. The Ukrainian Armed Forces concentrate their efforts on defense and preparation for a possible counterattack in the south, where shelling of the Russian forces’ rear infrastructure and strategic facilities continues.

Russian forces are centering their efforts on offensive actions in the direction of Bakhmut and Siversk; they are trying to seize the territory of the Vuhlehirsk thermal power plant. They seek to improve the tactical situation in the Sloviansk direction, preparing for an offensive on the Sloviansk-Kramatorsk agglomeration. The shelling of these cities has intensified. In other parts of the front, Russian troops are also actively using artillery and aviation. A total of 7 civilians were killed and 23 injured as a result of Russian shelling in the Donetsk region during July 18-20.

Russian troops focused on holding positions near Kharkiv. In addition, systematic artillery shelling of Kharkiv and its suburbs continues. In recent days, at least 5 people (including 1 child) have been killed in the region; 13 people have been wounded.

The status quo is maintained on the front line in Zaporizhzhia region. As a result of artillery shelling by Russian forces, civilian infrastructure is affected. Thus, in the evening of July 19, the town of Huliaipole was shelled.

The Armed Forces of Ukraine are preparing for a counteroffensive in the Kherson direction. This is confirmed by high-precision strikes on the positions, depots and rear of the Russian forces in the temporarily occupied towns of Kherson. In particular, the Ukrainian Armed Forces twice struck the Antonov Bridge in Kherson, which is an important link in supporting the Russian grouping on the right bank of the Dnipro River.

The shelling of the territory of the Mykolaiv region results in civilian casualties. In 24 hours alone, between July 18 and 19, at least 29 people were injured in the region.

Russian troops continue constant shelling of the border areas of the Sumy and Chernihiv regions.

They also launch MLRS strikes against the infrastructure of Dnipropetrovsk region. On July 18, a school and an agricultural facility were damaged in the region. The target of intensive shelling is the town of Nikopol. As a result of Russian military action on 20 July, 2 people were killed and 9 civilians were wounded on its territory.

Rocket attacks continue in the Odesa region. An attack on the night of July 19 injured 6 people (including 1 child).

Russian hackers continue cyberattacks against NATO member states, spreading malware via email. Similar tactics are used against Ukraine. The State Service for Special Communications and Information Protection of Ukraine warns of the spread of a dangerous file, the opening of which activates spyware and leads to the theft of information. Hackers try to disguise it as information from the Ukrainian military.

According to the Office of the Prosecutor General, as of the morning of July 20, more than 1,032 children were affected by the armed aggression of the Russian Federation in Ukraine (353 children were killed, 679 were injured).

Adviser to Mariupol Mayor Petro Andriushchenko reported a deterioration of the humanitarian situation in the city, including the problem with the delivery of drinking water. Residents of remote districts of Mariupol remain completely without access to water supply. The number of spontaneous cemeteries in the city is also increasing.

Russian troops continue committing crimes against the population of the temporarily occupied territories of Ukraine. In the Mariupol area, they hold more than 10,000 people in filtration camps, including civil servants, municipal workers, and citizens with a pro-Ukrainian stance. People remain without assistance and do not have enough food. There have been cases of torture of prisoners.

The situation also remains dangerous at the Zaporizhzhia nuclear power plant, which has been seized by Russian troops, where safety standards at the site are being violated. There are reports of plans by the Russian army to place its military equipment in the engine rooms of its NPP power units, which may block the access of firefighting equipment to them. At the same time, there is information about wounded Russian servicemen from the facility’s garrison.

Daria Herasymchuk, the Ukrainian Presidential Advisor-Counselor for Children’s Rights and Rehabilitation, reported that there were officially confirmed 5100 cases of deportation of Ukrainian children to the Russian Federation. However, it is impossible to verify the actual volume of Ukrainian children taken to Russia due to lack of access to the temporarily occupied territories and lists of deportees and displaced persons. Since the start of the full-scale war, Ukraine has managed to return only 46 children from Russian territory.

On July 19, another operation was conducted to transfer the bodies of dead military personnel. Under the Geneva Convention, Ukraine returned the bodies of 45 servicemen.

Ukraine continues to receive financial assistance from international partners to support macroeconomic stability. At the July 19 government meeting, Prime Minister Denys Shmyhal announced that the Cabinet of Ministers approved the attraction of another $4.5 billion grant from the United States of America.

The Budget Committee of the Verkhovna Rada supported the government’s decision to defer payments on Ukrainian Eurobonds for two years. This step will save the budget about $2.5 billion.

NJSC Naftogaz of Ukraine, Ukraine’s leading fuel and energy company, asked the Cabinet of Ministers to increase the company’s authorized capital by UAH 150 billion. The funds are needed to import additional amounts of gas before the heating season.

According to the Minister of Agrarian Policy Mykola Solskyi, Ukrainian farmers will have to reduce the cultivation of winter wheat and barley by 30-60% this year as a result of the naval blockade because of the lack of funds from exports. This will lead to a further reduction in the volume of Ukrainian exports of agricultural products.

According to Rustem Umerov, a member of the Ukrainian delegation in talks with Russia mediated by Turkey and the United Nations to unblock the export of Ukrainian grain, the export will take place through three ports: Odesa, Yuzhny and Chornomorsk. Security regulations will be enforced by a UN-sponsored monitoring group in Istanbul.

On July 20, the fourth meeting of the Ukraine Defense Contact Group, established to assess Ukraine’s defense needs and coordinate support, took place. In a briefing following the online meeting, U.S. Secretary of Defense Lloyd Austin announced that the United States would transfer four additional HIMARS systems to Ukraine. Lithuania promised to transfer additional military aid (M113 and M577 armored personnel carriers, ammunition) to Ukraine in the near future. In addition, this Baltic country offers to organize large-scale military training for servicemen of the Armed Forces of Ukraine.

Ukrainian President Volodymyr Zelenskyi continues dialogue with leaders of foreign countries. He held telephone conversations with Italian Prime Minister Mario Draghi and Polish President Andrzej Duda, describing the current situation on the front line. During the talks, he discussed the support of allies for Ukraine and coordinated steps to counter Russian aggression. Volodymyr Zelenskyi also held talks with Brazilian President Jair Bolsonaro. The state leaders discussed the resumption of Ukrainian grain exports in order to prevent a food crisis. In order to intensify contacts with the African continent, Volodymyr Zelenskyi held the first ever talks with the President of Côte d’Ivoire Alassane Ouattara in the history of bilateral relations. The President informed his African counterpart about Russia’s counteraction in artificially creating a global food crisis.

Foreign Ministers of Austria and the Czech Republic, Alexander Schallenberg and Jan Lipovsky, visited Ukraine. They met with President Volodymyr Zelenskyi and their Ukrainian counterpart Dmytro Kuleba. The diplomats assured the Ukrainian side that their states would continue to help Ukraine.

Ukrainian President’s wife Olena Zelenska began her visit to Washington, D.C. on the invitation of US First Lady Jill Biden. The visit included meetings with the heads of the US Department of State and the USAID agency. After the talks, USAID announced additional humanitarian aid to Ukraine worth over $169 million. Additionally, Zelenska addressed the US Congress and urged US politicians to decide on the transfer of weapons to Kyiv, in particular modern air defence systems.

The United States of America believes that Russia is preparing to annex the temporarily occupied territories of Ukraine. This is evidenced by the creation of occupation administrations and the involvement of local collaborators in them, the issuance of Russian citizenship and the introduction of Russian currency, as well as recent statements by Russian Foreign Minister Sergey Lavrov about the expansion of the geographical boundaries of Russian actions.

European Union countries will allocate to Ukraine the fifth tranche of military aid in the amount of €500 million. In addition, the permanent representatives of the EU member states approved the seventh package of sanctions against Russia, including a partial ban on imports of gold from Russia and an expansion of the list of persons against whom restrictions are imposed.

Ukraine is intensifying its integration with the international community in the energy sector. The Ministry of Energy reported that Ukraine and the International Energy Agency signed the Declaration of Association, which will allow Ukraine to participate in meetings of standing groups and committees of the IEA, as well as in ministerial meetings.

The competition commission for the election of the head of the Specialized Anti-Corruption Prosecutor’s Office has approved the results of the contest. As a result, Oleksandr Klymenko, detective of the National Anti-Corruption Bureau of Ukraine, was elected to the post. Approval of the results of the contest was one of the demands of Ukraine’s partners, who expect Kyiv to take effective steps to fight corruption. However, the procedure has not been completed – for now Klymenko must be approved in his position by the Prosecutor General.