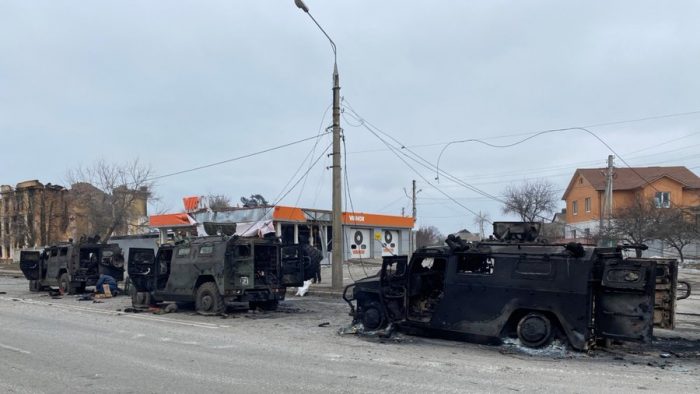 Russian troops continue air and missile strikes on infrastructure and residential areas. Preparations are underway for a Russian offensive in eastern Ukraine.

According to Kyiv Mayor Vitalii Klitschko, Russian troops shelled the Darnytskyi district on the morning of April 16. According to preliminary information, 1 person was killed and several others were injured.

In the Izium area, Russian troops are concentrating on holding positions that are serving as a bridgehead for the expected offensive against Sloviansk and Barvinkove in order to cordon off Ukrainian units in the area of the Joint Forces Operation.

The partial blockade and shelling of Kharkiv continues. The Russian military launched a rocket attack on a central area of the city in the morning, killing 2 people and injuring at least 18. In the evening, another shelling killed 1 person and wounded 2 more.

During the day, Russian forces shelled Sievierodonetsk, Rubizhne, Kreminna, and Lysychansk. According to the head of the Luhansk Regional Military Administration, Serhii Haidai, the Lysychansk oil refinery was damaged. The building of a medical facility in Pryvillia suffered damage as well. A gas pipeline in Sievierodonetsk was broken, leaving the city without gas. In Kreminna, the State Emergency Service recorded dozens of residential and non-residential house fires.

Russian aviation strikes Mariupol. According to the General Staff of the Armed Forces of Ukraine, fighting continues near the seaport in the city.

The Donetsk Regional Military Administration reported that 1 civilian was killed and 1 more wounded as a result of the April 16 shelling in the region. This data does not include information from Mariupol and Volnovakha.

The head of the Dnipropetrovsk Regional Military Administration Valentyn Reznichenko reported that an abandoned poultry farm was destroyed as a result of two missile strikes in the Dnipro district of the city of Dnipro. According to preliminary information, there were no casualties.

Dmytro Lunin, the head of the Poltava regional military unit, indicated that in a village near Poltava, a missile strike by the Russian military on the evening of April 15 damaged the facilities of the household infrastructure. 1 person was killed and 1 more was wounded.

The Center for Countering Disinformation at the National Security and Defense Council of Ukraine reports that Russia uses Ukrainian children deported from the temporarily occupied territories for propaganda purposes. The use of children in information warfare is a gross violation of international law.

The Main Directorate of Intelligence of the Ministry of Defense of Ukraine reports about distribution of propaganda leaflets by the Russian military in the temporarily occupied territories of Kherson region. They contain theses of Russian propaganda about the conflict and appeals not to resist the occupation forces.

The State Service for Special Communication and Information Protection of Ukraine of Ukraine warns about the distribution of malicious programs in messengers. They are contained in letters that are sent allegedly on behalf of the SSU.

Minister for Reintegration of the Temporarily Occupied Territories Iryna Vereshchuk reported that 1,449 civilians were evacuated through humanitarian corridors on April 16. Among them were 170 people from Mariupol; 1,211 people from towns in Zaporizhzhia region; and 68 people from Luhansk region. During the silence regime, the Russian army opened fire on the center of Lysychansk (Luhansk region). The evacuation was effectively disrupted.

Juvenile prosecutors report that 200 children were killed and more than 360 injured to varying degrees as a result of Russia’s large-scale invasion of Ukraine.

The Verkhovna Rada Commissioner for Human Rights Liudmyla Denisova informed that the occupation administration on the temporarily occupied territories of Donetsk and Luhansk regions is mobilizing children who participated in so-called “patriotic clubs” into the ranks of illegal armed formations.

The mayor of Trostianets (Sumy Region), Yurii Bova, said that remnants of chemical weapons (sarin and other substances) had been found in the liberated village of Bilka.

The Verkhovna Rada Committee on Freedom of Speech stated that Ukraine has documented 21 media deaths since the start of Russia’s full-scale invasion.

Minister for Reintegration of the Temporarily Occupied Territories of Ukraine Iryna Vereshchuk reported that about 700 Ukrainian military and more than 1,000 civilians are currently in Russian captivity.

According to Maksym Strelnyk, an employee of the Izium city council, in Kharkiv region, the Russian military organized the forced deportation of more than 50 locals from the city of Izium to Russia.

Minister of Education and Science of Ukraine Serhii Shkarlet said that the war had caused more than 5 billion dollars of damage to Ukrainian education. 91 educational institutions were completely destroyed, 923 facilities were partially damaged.

In another video address, Ukrainian President Volodymyr Zelenskyi announced that the government will not change electricity tariffs in the next six months.

According to First Deputy Minister of Internal Affairs Yevhen Yenin, Ukraine may block transfers of about 200 billion UAH to Russia and Belarus from companies associated with those countries so that the money cannot be used to wage war against Ukraine.

President of Ukraine Volodymyr Zelenskyi discussed by telephone with British Prime Minister Boris Johnson the agreements reached on defense and macrofinancial support. Boris Johnson stated that international support for Ukraine had only increased and that he was convinced of Ukraine’s success in its struggle.

Volodymyr Zelenskyi also had a telephone conversation with Swedish Prime Minister Magdalena Andersson. The sides discussed defense support for Ukraine and tightening of anti-Russian sanctions. Zelenskyi informed the head of the Swedish government about the critical situation in Mariupol.

A delegation of Georgian parliamentarians led by Parliament Speaker Shalva Papuashvili arrived in Kyiv. As part of the visit, the delegation visited Bucha and Irpin in the Kyiv region, which had been liberated from Russian troops. In addition, the Chairman of the Verkhovna Rada Ruslan Stefanchuk during the meeting with his Georgian colleague discussed Georgia’s accession to the sanctions against the Russian Federation. He also invited politicians and the people of Georgia to actively participate in the reconstruction of Ukraine.

Prime Minister Denys Shmyhal had a conversation with Alfred Kammer, Director of the IMF European Department. The parties discussed the Fund’s role in financial support of Ukraine during and after the war and agreed to make joint efforts to fill the IMF administrative account for Ukraine.

Since April 17, Italy and Belgium have been closing their ports to Russian ships as part of the expanded European Union sanctions against the Russian Federation. Romania made the same decision, banning ships flying the Russian flag from entering Romanian ports in the Black Sea and the Danube River. The exceptions are ships with humanitarian cargo, as well as those carrying some goods to EU countries or in need of aid.

German Minister of Justice Marco Buschmann expressed the position of the federal government and stated that possible deliveries of heavy weapons to Ukraine are legitimate from the point of view of international law, because Ukraine is waging a legitimate defense war against Russia. Buschmann noted that Germany has become one of the first countries in the world to systematically investigate and preserve evidence of war crimes committed in Ukraine.

German Minister of Finance Christian Lindner announced that Germany would increase its military support fund for foreign countries to 2 billion euros, most of which would be used to buy weapons for Ukraine.

Lychakiv District Court of Lviv selected a measure of restraint in the form of detention without the right to bail for MP Viktor Medvedchuk, who is suspected of high treason.