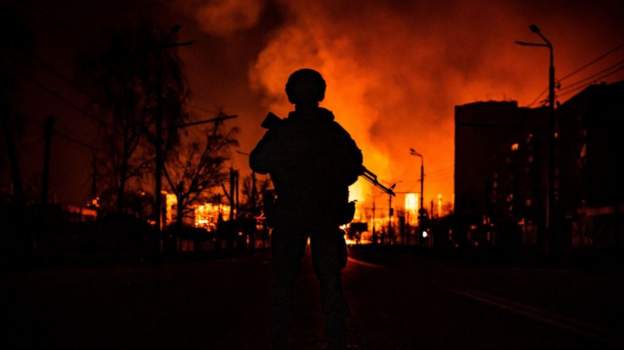 Russian forces are attempting to conduct an offensive in certain directions in Donetsk, Luhansk, and Kharkiv regions and are launching missile strikes on Ukrainian territory.

On the night of April 14-15, Russian troops shelled territory in the Kyiv region. Oleksandr Pavliuk, head of the Kyiv Regional Military Administration, reported 3 missile strikes. According to the Kyiv Regional Military Administration, the explosions occurred in the Vasylkiv community. According to preliminary information, an air defense system worked. The Vizar machine-building plant in Vyshneve, which produces Neptun anti-ship missiles, was also damaged.

The State Border Guard Service of Ukraine reported that Russian troops fired mortars 3 times at the area adjacent to Ukraine’s state border near the village of Senkivka (Chernihiv Region).

Russian forces continue to prepare for an offensive from the Izium area. According to the General Staff of the Armed Forces of Ukraine, up to 22 battalion tactical groups of the Russian Armed Forces are concentrated here.

At the same time, shelling of Kharkiv continues. The head of the Kharkiv Regional Military Administration, Oleh Syniehubov, reported the shelling of one of the residential areas of the city. The Kharkiv Prosecutor’s Office informs that as a result of the shelling, 10 people were killed (including a 7-month-old child) and 35 people were injured.

The visit of Oleh Syniehubov, the head of the Kharkiv Regional Military Administration, to the Rohan community confirms information about the liberation of the settlement from Russian troops.

In Luhansk region, Russian troops are stepping up their shelling of Ukrainian Armed Forces positions near Popasna and Rubizhne, where positional battles are ongoing.

According to the head of the Luhansk Regional Military Administration, Serhii Haidai, Russian troops shelled homes and infrastructure in the Luhansk region 24 times during April 14 — 2 people were killed and 2 more were wounded. Haidai noted that the shelling of Kreminna continued. 1 person was killed and 5 were wounded. In Lysychansk, the married couple of volunteers came under fire (1 person was killed, 1 was wounded). In Sievierodonetsk, the city’s infrastructure was hit — a water pipeline and two food trains were damaged.

Russian troops launched an attack near Marinka in Donetsk region, and are shelling positions of the Armed Forces of Ukraine near Toretsk. They are preparing to intensify combat operations near Avdiivka, where 2 people were wounded as a result of the shelling.

Ivan Arefiev, a representative of the Zaporizhzhia Regional Military Administration, reported that the town of Vasylivka was shelled with artillery, several houses in the city center and private sector, a store and a depot at the Tavriisk railway station were damaged. According to preliminary information, 1 person was killed, 5 were injured.

Mayor of Oleksandriia (Kirovohrad region) Serhii Kuzmenko informed about a missile strike on the infrastructure of the airfield. Rescue operations are ongoing.

Russian troops shelled one of the districts of Mykolaiv. The Nova Poshta sorting center was damaged. According to Vitalii Kim, head of the Mykolaiv Regional Military Administration, 5 people were killed and 15 were wounded as a result of the shelling.

President of Ukraine Volodymyr Zelenskyi told CNN the losses of the Ukrainian Armed Forces in the conflict. According to him, between 2,500 and 3,000 Ukrainian servicemen have been killed so far and about 10,000 have been wounded.

Minister for Reintegration of the Temporarily Occupied Territories Iryna Vereshchuk reported that on April 15, 2,494 people reached Zaporizhzhia by humanitarian corridors from Mariupol and Berdiansk in their own transport. It was possible to evacuate 370 people from towns in Luhansk region, despite constant shelling.

The Russian military continues to interfere with the evacuation of people to territory controlled by the Ukrainian government. On April 14, buses transporting people from Popasna towards Starobilsk were shelled near Borova village in Izium district (Kharkiv region). The Kharkiv Prosecutor’s Office indicated that according to preliminary data, 7 people were killed and 27 injured.

The UN High Commissioner for Refugees reported that as of April 14, 4,796,245 Ukrainians had left the country because of the war. Meanwhile, 90 percent of those fleeing the war are women and children.

Since the beginning of the large-scale Russian invasion as of April 14, 2022, the Office of the UN High Commissioner for Human Rights has recorded 4,633 civilian casualties in Ukraine (1,982 dead and 2,651 wounded). More than 553 children have been injured in Ukraine. Juvenile prosecutors report that 198 children were killed and more than 355 children were injured with varying degrees of severity.

Mariupol City Council said that the Russian military has begun the process of exhumation of bodies that were previously buried in the yards of residential buildings in Mariupol. It is noted that they forbid the burial of people killed by them – in each yard their guardian is put, who does not allow the citizens of Mariupol to shape the land of their deceased relatives or acquaintances. It is assumed that in this way the Russian army is covering their tracks of its war crimes.

The Security Service of Ukraine spokesman Artem Dekhtiarenko said he had intercepted a conversation between a Russian serviceman praising the atrocities he had committed with Ukrainian prisoners of war.

Kyiv Region Police Chief Andrii Niebytov reports that law enforcement officers have already found more than 900 bodies of civilians in the liberated settlements of the region. Most of them have gunshot wounds. He also emphasizes the urgency of the mine threat, which affects civilians in the region.

The UN UNOSAT satellite center shows the level of destruction of Ukrainian cities during the war based on images from space. In the Kyiv region, the village of Horenka suffered the most – 77% of the settlements were damaged. Irpin suffered by 71%; Hostomel – by 58%; Bucha – by 26%.

Oleksandr Omelianenko, head of the Bucha district police department of the Kyiv region, said that more than 200 houses had been destroyed and more than 600 houses damaged in the Makariv district of Kyiv region.

Oleksandr Pavliuk, the head of the Kyiv Regional State Administration, said that the demining of the entire deoccupied territory of the Kyiv region could take up to a year.

The Minister of Infrastructure of Ukraine Oleksandr Kubrakov said that since the beginning of the full-scale Russian invasion of Ukraine, about 300 bridges have been destroyed.

The Food and Agriculture Organization (FAO) noted that the food security situation throughout Ukraine is deteriorating. 27% of regions (where hostilities continue or where the largest number of internally displaced persons are) face problems. Within two months, food shortages will occur in another 11% of regions.

According to Prime Minister Denys Shmyhal, the Government together with the UN is launching two more benefit programs for internally displaced persons. These funds will be paid by the UN World Food Program within 3 months.

Acting President of NNEGC Enerhoatom Petro Kotin stated that the direct and indirect losses of the company as a result of the full-scale war waged by Russia reach UAH 35 billion.

The Commander-in-Chief of the Armed Forces of Ukraine Valerii Zaluzhnyi discussed by phone with the Chairman of the Joint Chiefs of Staff General Mark Milley the fighting on the Kharkiv-Izium and Donbas borders, the critical situation around Mariupol, and rocket fire throughout Ukraine. Zaluzhnyi stressed the needs of the Armed Forces in armaments and ammunition.

The Russian Federation has sent diplomatic notes to countries supplying arms to Ukraine, demanding to stop arming the country, saying that failure to do so could have “unpredictable consequences”.

Polish President Andrzej Duda has signed a law on special decisions to counter aggression against Ukraine. Among other things, it bans the import of coal from Russia and Belarus.

The International Monetary Fund and its partners are preparing for Ukraine’s large-scale reconstruction, ready to provide $1.4 billion in emergency funding to help Ukraine meet its immediate spending needs.

Prime Minister Denys Shmyhal said that the Cabinet of Ministers had reached an agreement with the Government of Japan to attract 13 billion yen in aid.

The post offices of Poland, Sweden, Denmark, Finland and Australia have already submitted relevant documents to the Universal Postal Union in response to Ukrposhta’s appeals to stop delivering items to and from Russia and Belarus. The postal blockade was also joined by the Latvian Post, which stopped postal money orders to and from these countries in March.

The Ministry of Foreign Affairs of Northern Macedonia has declared 6 other Russian diplomats persona non grata.