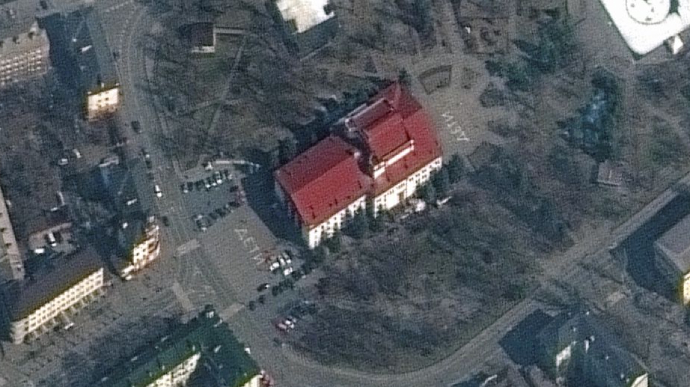 Active hostilities took place near Irpin, Bucha and Vyshhorod, where the Armed Forces of Ukraine were conducting a counterattack.

Kyiv Mayor Vitali Klitschko informed that on the evening of March 16, shells hit several private houses in the Podilskyi district of Kyiv. Two residential buildings in the Shevchenkivskyi district of Kyiv were damaged as a result of shelling on March 17, according to a report from the State Emergency Service of Ukraine Department in Kyiv. On the morning of March 17, the remnants of a downed rocket landed on a multi-story building in the Darnytskyi district. One person was killed and three others were injured.

On the morning of March 16, the Russian armed forces launched a missile strike on the city of Berdychiv, destroying the infrastructure of a military training center.

The Kharkiv and Luhansk directions:

An air raid was carried out on Mariupol, which resulted in the destruction of the Drama Theater building, where about a thousand civilians had taken shelter. Later, there was an airstrike on the Neptun swimming pool premises where civilians, particularly women and children, were staying.

On the night of March 15-16, the TV tower of the Concern of Radio Broadcasting, Radio Communications and Television (RRT), which is the part of the State Special Communications Service, was shelled in Vinnytsia. Broadcasting in the city is temporarily closed.

According to the head of the Regional Military Administration, Vitali Koval, around 23:00 Russian troops launched a missile attack on “one of the military infrastructure facilities”, which is located in the town of Sarny (Rivne region).

At about 12:30, a fake call by the President of Ukraine to lay down arms and surrender was broadcast on the news feed of the Ukraine 24 TV channel.

The Center for Counteracting Disinformation under the National Security and Defense Council of Ukraine created a new fact-check bot, “Perevirka” (“Verification”).

Russia launched a fake in the media that the Security Service of Ukraine was allegedly “preparing a provocation using toxic substances against civilians with the support of Western countries”.

The humanitarian situation in Mariupol is highly difficult. On March 16, airstrikes were carried out on the Drama Theater and the Neptun swimming pool. According to preliminary data, several hundred Mariupol residents were hiding in the Drama Theater. Russian troops also fired Grad missiles at a convoy leaving Mariupol for Zaporizhzhia. There are five wounded, including one child. Despite this, they managed to evacuate 6,426 people.

In Chernihiv, Russian troops fired on people waiting in line to buy bread: at least 10 people were killed. Rescuers found the bodies of five people, including three children, in a dormitory in Chernihiv that was destroyed in an air strike on March 13.

According to reports from Enerhoatom, the Russian military continues to detonate shells and mines on the territory of Zaporizhzhia NPP. As of the morning of March 16, there were about 50 pieces of enemy equipment, many explosives and weapons on the territory of the plant. Formally, the Russians do not interfere in the operation of the nuclear power plant, but all technical decisions have to be coordinated with them by the personnel. As a result, nuclear and radiation safety is threatened.

In Kyiv a residential building collapsed due to shelling. This was reported by the State Emergency Service of Ukraine. According to preliminary information, two people were injured, 35 people were evacuated.

Ivan Fedorov, the mayor of Melitopol, was released from Russian captivity, while the mayor of captured Skadovsk Oleksandr Yakovliev recorded a video in which he claimed that he was not threatened.

According to Prosecutor General Iryna Venediktova, 103 children were killed. About 1.5 million Ukrainian children have become refugees since the Russian invasion on February 24.

As of March 15, the United Nations recorded 726 dead and 1,174 wounded Ukrainians civilians as a result of the hostilities. At the same time, the Office of the High Commissioner notes that the number of casualties could be significantly higher, especially among residents of territories that are surrounded. We are talking about territories where active ground hostilities continue, in particular the city of Izyum in Kharkiv region, Volnovakha and Mariupol in Donetsk region.

Residents of occupied Skadovsk in the Kherson region held a peaceful rally, demanding the release of the town’s leadership detained by the Russian military. In response to this action, the Russian servicemen used tear gas and opened fire.

In Zaporizhzhia region, residents also did not stop coming out to pro-Ukrainian rallies. In particular, this time there was a procession of several thousand residents of Berdyansk against the temporary occupation.

On March 16, Ukraine joined ENTSO-E, the united power system of continental Europe. Synchronization of the Ukrainian energy system with the European one will reduce Russia’s influence on Europe in the energy sector and increase energy security throughout the region. The Verkhovna Rada of Ukraine adopted the Law on Increased Spending on Development, Purchase, Modernization and Repair of Armaments and Military Equipment.

Ukrainian President Volodymyr Zelensky delivered a speech to the United States Congress, in which he once again stressed his initiative to create the U-24 (United for peace) association to resolve interstate conflicts and also called for providing an alternative to the introduction of a no-fly zone over Ukraine, in particular in the form of air defense systems.

In his address on 16 March, Volodymyr Zelensky said that Karim Khan, the prosecutor of the International Criminal Court in The Hague, had already arrived in Ukraine. The investigation team of the International Criminal Court has also started its work, and together with Ukrainian law enforcers it is already collecting all the evidence and facts of Russian war crimes on the territory of Ukraine.

The International Court of Justice ruled that Russia must immediately cease military actions in Ukraine. At the highest legal level, the fact of Russia’s invasion of the territory of Ukraine was ascertained, and the Court’s decision is legally binding in accordance with the norms of international law. Moreover, the Court did not find any evidence of Russian statements about genocide on the territory of Ukraine.

The defense ministers of NATO countries as well as Finland, Sweden, Georgia, and Ukraine held an extraordinary meeting to discuss the Russian invasion of Ukraine and the long-term implications for NATO, according to the British delegation to NATO. Ukrainian Defense Minister Oleksiy Reznikov addressed the extraordinary meeting of the North Atlantic Council.

The UNESCO Executive Board strongly condemned the military actions of the Russian Federation, supported by Belarus, against Ukraine and adopted a decision “The Current Situation in Ukraine in All Aspects of UNESCO’s Mandate” at the Seventh Special Session. The decision demands that the Russian Federation immediately cease its offensive against Ukraine in order to guarantee protection from further damage to Ukraine’s natural, architectural and movable cultural heritage in all its forms.

Switzerland has imposed sanctions against 200 Russian companies and individuals. Their assets in Switzerland will be frozen.

The U.S., along with Australia, Canada, the European Commission, Germany, Italy, France, Japan and the United Kingdom, created a multilateral task force to search for and freeze the assets of Russian oligarchs. In addition, the U.S. will hand over another $800 million in defense assistance to Ukraine this week, including air defense equipment, anti-tank systems, drones, small arms, etc. This was announced by U.S. President Joe Biden speaking at the White House on March 16.