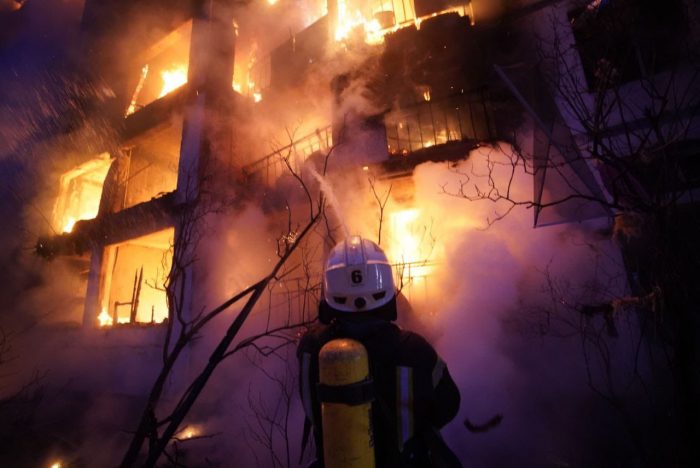 On March 15, in the Sviatoshynskyi district of Kyiv, a residential house was damaged as a result of a munitions hit, killing 4 people. Thirty-five people were evacuated.

As a result of the airstrikes in the town of Malyn and the village of Yurivka in Zhytomyr region, one person was killed and two were injured. Two private houses were destroyed and up to a dozen houses were damaged.

As of 19:00, the head of the Kharkiv Regional State Administration, Oleh Synyehubov, stated that the Armed Forces of Ukraine repulsed an attack by Russian troops near Kharkiv and pushed them beyond their previous positions.

In the Donetsk region, the village of Oleksandropil in the Kostiantyniv district was shelled, a person was injured, and the administrative building was damaged.

According to the Nikopol mayor Oleksandr Sayuk, the area between Nikopol and the village of Oleksiyivka in the Dnipropetrovsk region, where Russian troops were advancing towards Zaporizhzhia, was shelled.

On the morning of March 15, an air and ship-borne missile attack was launched against a a village in Odesa region, injuring two people.

Ukrainian Deputy Minister of Internal Affairs Anton Gerashchenko reported that “around March 16, there was a massive missile and artillery fire from ships near the shore of the Ukrainian village of Tuzla in Odesa region.”

According to the head of the Dnipropetrovsk Regional Military Administration, there were two missile strikes on the airport in Dnipro, on the night of March 14 to 15, which destroyed the runway and damaged the terminal.

The Security Service of Ukraine detained a hacker who supplied the Russian military (including top military leaders) with mobile communications in Ukraine.

The Center for Countering Disinformation under the National Security and Defense Council of Ukraine reported a new type of information threat. Bot users or personal accounts send messages in chat rooms to find out the extent of bombing damage and the exact location to correct fire.

Ukraine’s Ministry of Digital Transformation has created an online game through which targeted attacks are carried out to block Russian sites serving the Russian army.

On March 15, 7 out of 9 arranged humanitarian corridors went functioning, managing to evacuate 2,893 people from blockaded towns in Donetsk region, including Mariupol, as well as Sumy and Kharkiv regions.

Mariupol has been besieged since early March. The city is under constant bombardment by aircraft and artillery. Currently, 400 people along with medical personnel are being held hostage in the regional intensive care hospital.

The town of Izyum in the Kharkiv region is on the brink of a humanitarian catastrophe and has been under siege for two weeks. “No one buries the dead. Medical assistance is not provided. There is no way to deliver humanitarian aid, which is in sufficient quantity. It is impossible to take people out,” declares deputy mayor Volodymyr Matsokin.

As of March 15, according to the Prosecutor General’s Office, 97 children had been killed and more than 100 injured in Ukraine.

Photojournalist and Fox News cameraman Pierre Zakrzewski was killed while gathering news in Kyiv region. Another network correspondent, Benjamin Hall, is hospitalized. In total, six journalists have been killed and seven wounded since the conflict began.

Search and rescue works after air attack of school in the Mykolaiv region on March 13 are completed. Rescuers released 3 victims and the bodies of 7 people from under the rubble. A total of 80 people, including two children, were injured in Mykolaiv region during the day.

According to Serhiy Haidai, head of the Luhansk Regional State Administration, an evacuation bus carrying people from Rubizhne in the Luhansk region came under fire on March 15.

In less than three weeks, at least 28 buildings of spiritual significance (including Orthodox churches, seminaries and synagogues) in at least six regions of Ukraine have been damaged.

The International Organization for Migration estimates that the number of Ukrainians who have left the country since the start of the full-scale war has reached 3 million.

Residents of temporarily occupied settlements in the Kherson region continue to protest.  In particular, during the day rallies in support of Ukraine were held by residents of Kherson, as well as residents of one of the largest Black Sea resorts – the village of Iron Port.

On March 15, the Presidential Decree on the extension of martial law in Ukraine until April 24, 2022 inclusive was approved. The Verkhovna Rada adopted 21 laws to support the country during martial law and strengthen the economic system. In particular, it provides for a simplified system of taxation for big business, the abolition of excise taxes on fuel and VAT reduction, exemption of private entrepreneurs from paying a single social contribution and more. The President of Ukraine also singed amendments to several laws establishing criminal liability for collaborative activities.

Ukraine and Russia are continuing the negotiation process – the focus is on discussing general issues of settlement, ceasefire, withdrawal of Russian troops from Ukraine. According to Zelensky’s address on March 16, “the positions in the talks sound more realistic. However, there is still time for decisions to be in Ukraine’s interests.” Negotiations are scheduled to resume on March 16.

The Heads of Government of Poland, the Czech Republic and Slovenia visited Kyiv in agreement with the European Union. The purpose of the visit is to confirm support for Ukraine’s sovereignty and independence, as well as to present a broad package of support for Ukraine in the war. EU Commissioner for the Environment Virginius Sinkevicius also arrived in Ukraine. On March 15, Lithuanian Foreign Minister Gabrielius Landsbergis paid a working visit to Ukraine. A joint statement condemning Russia’s actions was adopted during the visit, emphasizing that Belarus is directly involved in the aggression.

A number of media outlets have recently reported on Russia’s request to China for financial, technical and food support. This information is denied by both countries.  The United States has warned China of the potential consequences of Russia’s support for China, including sanctions.

On March 15, Joe Biden finally signed a decision to provide $13.6 billion in emergency aid to Ukraine. Ukraine will receive an additional $200 million from the World Bank against the background of Russian aggression.  The funds are intended to support the social security of vulnerable groups.