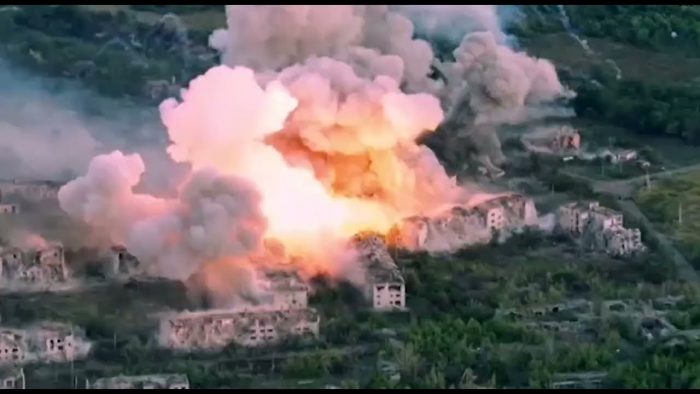 In the southern direction, the Armed Forces of Ukraine are striking at the logistics of Russian troops, increasing pressure on their bridgehead on the right bank of the Dnipro River and trying to force them to retreat from Kherson. Because of the destroyed arms depots, the artillery activity of the Russian forces has significantly decreased. In Donbas, despite active assaults by Russian forces in the areas of Bakhmut and Avdiivka, the front line remains stable. Ukrainian units hold their positions, while local Russian military advances are insignificant. The Russian Federation continues to launch air and missile strikes against military and civilian infrastructure in various regions of Ukraine. The situation around the temporarily occupied Zaporizhzhia NPP is still threatening. Russia is using it to blackmail the global community. The occupation of the facility and intention to disconnect it from the Ukrainian energy system jeopardizes the supply of electricity to the population of Ukraine.

Russian troops continue their preparations to storm Bakhmut. They are trying to advance into the city from the east. In this direction, fighting is taking place around Soledar. At the same time an attack is being carried out towards Bakhmut from the south.

Russian troops are conducting assault operations on the western outskirts of Donetsk—particularly active fighting is taking place for the village of Pisky, the capture of which by Russian troops will create a threat of encirclement for Avdiivka.

Systematic shelling along the front line continues. During August 11-14, 17 people were killed and 72 civilians were wounded on the territory of Donetsk region.

The Ukrainian Armed Forces are targeting Russian military facilities in the temporarily occupied territories. According to Russian media reports, on August 14, a base of Russian mercenaries from the so-called Wagner group was hit in Popasna (Luhansk region).

In the Kharkiv direction, Russian troops hold the previously occupied positions. Constant shelling of Kharkiv and nearby settlements continues. Attack aviation is actively used for strikes in the area east of the city.

In the Izium area, the intensity of combat operations decreased due to the relocation of Russian troops to other parts of the front. This led to an easing of pressure on Ukrainian positions near Sloviansk in this direction.

In the Zaporizhzhia direction, shelling continues along the line of contact. Russian troops are accumulating troops on the territory of Zaporizhzhia region. The intensification of hostilities was recorded to the south of the regional center.

On August 11, Zaporizhzhia NPP and adjacent territories were shelled again. As a result of the shelling, it was not possible to change the maintenance personnel at the plant in time; the employees of the previous shift will continue their work. Also, on August 14, the Russian military shelled ZNPP satellite town Enerhodar, resulting in 1 fatality.

The Ukrainian Armed Forces are carrying out systematic strikes on the logistics routes of Russian troops in the temporarily occupied territories of the Kherson region. Thus, they want to cut off part of the Russian contingent from supplies and force the Russian military to withdraw from the right bank of the Dnipro River. Specifically, on August 13, the Armed Forces of Ukraine reported that they had struck the automobile bridge of the dam in Nova Kakhovka; on August 14, the Ukrainian military confirmed information about another round of strikes on the Antonivskyi bridge using high-precision weapons. After the strikes, both bridges were rendered non-operational.

Mykolaiv is subjected to daily shelling. In particular, on August 13, a rocket exploded near a residential building, injuring 1 person. Also on August 13, the city’s port infrastructure was attacked.

The Russian military again shelled the Nikopol and Kryvyi Rih districts of the Dnipropetrovsk region.

On the evening of August 12, a missile strike was launched against Zaporizhzhia, killing at least one person and injuring two civilians.

Systematic shelling of the border areas of Sumy and Chernihiv regions continues. Russian forces are using aviation, mortars, and cannon and rocket-launching artillery.

After the Latvian Saeima declared Russia a state sponsor of terrorism, the latter launched a DDoS attack on the Saeima website, temporarily paralyzing its work.

According to the Office of the Prosecutor General, as of the morning of August 14, the number of children affected by the armed aggression of the Russian Federation in Ukraine increased to 1,072 (361 children killed, 711 wounded). 541 children lost parental care directly due to the war. The parents of 106 of them were killed. Daria Herasymchuk, adviser to the President of Ukraine on Children’s Rights and Rehabilitation, reported that as of August 1, 203 children were missing and at least 5,754 children were illegally deported to Russia.

Iryna Vereshchuk, Deputy Prime Minister—Minister for Reintegration of Temporarily Occupied Territories of Ukraine, informed that since August 2 about 4 thousand citizens have already left Donbas for safe places as part of the mandatory evacuation. However, a significant number of people remain in the region, taking a big risk, as the heating season in the region may not be possible due to the destroyed infrastructure.

As of August 10, 2022 the Ministry of Culture and Information Policy recorded 464 episodes of destruction or damage to Ukrainian cultural heritage, which is a war crime under the 1954 Hague Convention. Most of the crimes were recorded in Donetsk and Kharkiv regions. Thus, Russia wants to destroy the Ukrainian identity and national memory of Ukrainians by destroying cultural monuments. The Office of the Prosecutor General of Ukraine informs about the damage of 2321 educational institutions by the Russian troops, of which 286 were destroyed completely. The information is preliminary, and work continues to clarify the data in places of active hostilities.

Since the start of the full-scale war, Ukraine has returned the bodies of 522 dead military personnel under the Geneva Convention.

The Russians placed a military base on the territory of a hospital with civilians in temporarily occupied Melitopol (Zaporizhzhia region) thus using the civilian population as a shield.

As a result of the actions of the Russian military in Ukraine, a territory of about 270 thousand square kilometers needs humanitarian demining. Complete demining of the territories will take 5-10 years.

The resistance movement remains active in the temporarily occupied territories. In recent days, explosions have been recorded in Starobilsk (Luhansk region), Mariupol (Donetsk region), and Melitopol (Zaporizhzhia region). Partisans damaged a railway bridge near the latter.

International rating agencies Fitch and S&P have worsened Ukraine’s credit ratings due to a two-year deferral of payments on the state debt. Fitch adds that they will be able to raise Ukraine’s rating when the agreement on debt restructuring takes effect.

The press service of the National Bank of Ukraine reports about significant losses of Ukrainian banks due to Russian aggression. In the second quarter of 2022, the sector’s net loss amounted to almost UAH 4.5 billion.

The European Union and 42 countries issued a joint statement calling on the Russian Federation to immediately withdraw its military forces and all other unauthorized personnel from the Zaporizhzhia nuclear power plant, its immediate surroundings and the entire territory of Ukraine. It is noted that the deployment of Russian military and weapons at the nuclear facility is unacceptable and violates the principles of safety and safeguards that all members of the IAEA have pledged to respect.

Director General of the International Atomic Energy Agency Rafael Mariano Grossi called for granting the mission access to the Zaporizhzhia nuclear power plant so that IAEA experts could assess safety risks. UN Secretary General António Guterres proposed an immediate cessation of military activities near Zaporizhzhia NPP: he insisted on the need to reach an urgent agreement on a safe demilitarization perimeter to ensure the safety of the site.

On August 11, the Conference of Northern European Allies in support of Ukraine was held in Copenhagen at the level of defense ministers. More than 20 countries took part in the Conference, accumulating more than €1.5 billion in military aid. These funds could be used to purchase weapons for Ukraine or to train the Ukrainian military. The Conference also agreed on a fund to increase the financing of arms production, which will be created by the United Kingdom. For their part, Poland and Slovakia said that they would increase the production of military equipment. Participants also discussed the demining of Ukraine, where Iceland will play a key role in the preparation of the relevant mission of the partners.

Minister of Defense of Slovakia Jaroslav Naď confirmed that the first four Zuzana 2 self-propelled howitzers have already arrived in Ukraine. Another four units are planned to be delivered in the near future. In addition, Slovakia plans to decommission its MiG-29 fighters at the end of August—they will most likely be transferred to Ukraine. Apart from that, the UK provided Ukraine with several units of M270 multiple rocket launchers, which will help to hit the targets at the distance of 80 kilometers. The Netherlands, following Sweden, Denmark, Finland and Norway, joined the British training program for the Ukrainian Armed Forces.

To attract the support of world spiritual leaders, Ukrainian President Volodymyr Zelenskyi had a telephone conversation with Pope Francis, during which he informed about the aggression that Russia is committing against Ukraine and about the crimes of the Russian military.

On August 11, the Latvian Saeima made a statement about Russia’s targeted military attacks against civilians in Ukraine. It recognized Russia’s violence as an act of terrorism and the Russian Federation itself as a state sponsor of terrorism.

European states are considering the possibility of restricting the entry of Russian citizens into their territory with Schengen visas. The issue will be discussed at a meeting of foreign ministers of EU countries at the end of August. At present, the idea is supported by the Baltic states, Finland, Poland and the Czech Republic. Ukrainian President Volodymyr Zelenskyi has repeatedly called upon the European partners to take this step.