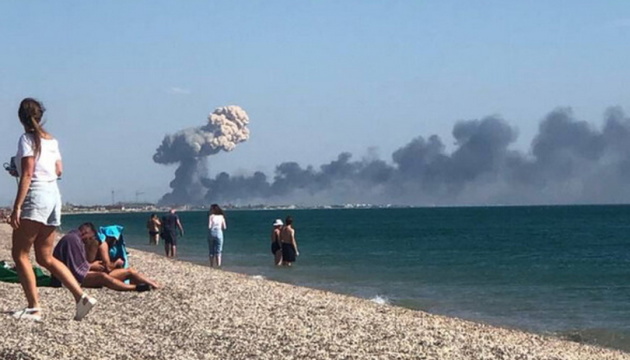 Active hostilities are taking place in Donetsk region, where fighting continues around Bakhmut and Avdiivka, and in the south, where Russian forces are concentrated on the right bank of the Dnipro River. The Armed Forces of Ukraine were able to inflict significant losses on the Russian air defense system in the south, using special AGM-88 anti-radar missiles. Strikes against Russian military facilities on the Azov Sea coast and Crimea demonstrate Ukraine’s ability to hit targets far away from the front line. In general, Ukrainian strikes against Russian logistics, formations, and troop bases threaten the supply of the Russian grouping in the Mykolaiv and Kryvyi Rih directions.

In the northern Donetsk region, Russian troops are preparing positions for an assault on Bakhmut. In particular, they are trying to enter the town from the east through Soledar, for which fighting continues. Also, Russian troops proceed to storm the western outskirts of Donetsk. Their goal is to push the Ukrainian military out of Avdiivka.

Systematic shelling along the front line persists. Between August 8–10, 16 people were killed and 33 civilians were wounded in the Donetsk region.

In the Kharkiv direction, Russian troops hold previously taken lines. The shelling of Kharkiv and nearby settlements continues. There are targeted strikes on critical infrastructure: on August 8, Russian shelling damaged the CHPP in Kharkiv, which provides heat and hot water to about a third of the city. As winter approaches, it is likely that the power plants that provide electricity and heat to large cities will increasingly be the targets of rocket and artillery fire.

In the Zaporizhzhia direction, shelling continues along the line of contact. The Ukrainian Armed Forces are striking at the rear of the Russian troops. New explosions were recorded on the territory of temporarily occupied Melitopol and in Kyrylivka on the coast of the Sea of Azov.

The head of the occupation administration in Zaporizhzhia region, Yevhen Balytskyi, stated that preparations for a so-called “referendum” on the annexation of the region’s temporarily occupied territories to Russia had begun.

Russian troops made several unsuccessful offensive attempts in Kherson region. They continue shelling Mykolaiv; 3 people, including 1 child, were wounded in the city on the night of August 10.

The Ukrainian Armed Forces continue to strike transport and logistics routes in the temporarily occupied territory of Kherson. In particular, the Antonivskyi and Kakhovskyi bridges were struck again. As a result, the completion of repair work on the first object has been disrupted – the occupation administration is forced to declare that the resumption of the Antonivskyi bridge is postponed. The second object is also out of operation.

The Armed Forces of Ukraine are increasing the distance at which they strike the facilities of Russian troops. On August 9, a munitions strike was recorded in the Henichesk district of Kherson region, which is the most distant from the front line. Subsequently, a military airfield near the town of Saky on the territory of temporarily occupied Crimea was hit. Satellite images recorded significant damage at the site, as well as the destruction of at least nine planes, which is exactly the data on the increase in air losses of the Russian troops presented in the August 10 report of the General Staff of the AFU. The Russian side denies the information about the shelling, trying to hide the inefficiency of its own air defense system.

Russian troops continue to launch missile strikes on Ukrainian territory. The Ukrainian air defense system demonstrates an increase in efficiency, shooting down a significant number of missiles. However, this does not completely eliminate the danger. For example, on August 8, the air defense system shot down a missile over the territory of Uman district (Cherkasy region). But the falling debris injured two people, one of whom later died.

Intense shelling of the border territories of Sumy and Chernihiv regions by mortars, as well as cannon and rocket artillery continues. In Dnipropetrovsk region, Russian troops are continuously striking Nikopol and nearby communities. The August 10 shelling killed 13 people and wounded 11 others.

The Office of the UN High Commissioner for Human Rights has updated data on civilian casualties resulting from the full-scale Russian invasion of Ukraine. As of August 8, the confirmed casualties are 12,867 (5,401 dead, 7,466 wounded). According to the Office of the Prosecutor General, as of the morning of August 10, more than 1,066 children (361 dead, 705 injured) were injured as a result of the armed aggression of the Russian Federation in Ukraine.

UN Humanitarian Coordinator in Ukraine Denise Brown stated that the number of people in need of humanitarian assistance in Ukraine as a result of the war may increase from 11 million to 17.7 million by the end of the year. With the onset of cold weather, more people in the occupied and frontline territories will need immediate assistance from national and international humanitarian organizations.

The humanitarian situation in the temporarily occupied territories remains critical. The head of the Sievierodonetsk City Civil-Military Administration, Oleksandr Striuk, reported that the sewage system is broken and there are no supplies of electricity, gas and water in the occupied city of Sievierodonetsk. Local residents have problems with access to food.

The Ministry of Reintegration informs of attempts by Russians to conduct forced passportization of citizens from the occupied territories of Ukraine for further mobilization into the Russian Armed Forces.

On August 9, another operation was conducted in accordance with the norms of the Geneva Convention to transfer the bodies of dead military personnel. The bodies of 17 Ukrainian servicemen were returned.

Human Rights Watch documented a number of episodes that had signs of war crimes: torture, ill-treatment, arbitrary detention and illegal detention of civilians in the occupied areas of Ukraine. In addition, Russian military personnel also torture prisoners of war in these areas. The organization called on the Russian authorities to immediately stop these violations and realize that they will be held accountable for their actions. Since February 2022, human rights defenders estimate that at least 600 people have been forcibly abducted in the Kherson region alone.

On the territory of temporarily occupied Melitopol in Zaporizhzhia region in the evening of August 9, there was an explosion near the office of the United Russia party. In such a way partisans are trying to prevent an illegal “referendum” on the accession of the region to Russia.

The Ministry of Finance of Ukraine announced that the holders of Ukraine’s Eurobonds have agreed a two-year deferral of payments, while maintaining the current yield rates. This followed an initiative announced by Ukraine’s international partners in the Group of Seven and the Paris Club on July 20, 2022, to suspend payments on Ukraine’s debt service until the end of 2023.

The U.S. is increasing overall support for Ukraine’s budget for basic social and financial aid payments to the population. According to Reuters, on August 8 the U.S. Agency for International Development (USAID) announced the allocation of an additional $4.5 billion to the Ukrainian government through a World Bank mechanism. USAID funding will come to the government of Ukraine in tranches, the first of which in the amount of $3 billion is expected in August.

The opening of grain corridors through the Black Sea helps Ukraine’s grain exports substantially. In particular, agricultural exports rose by more than 20% in July compared to June.

The seized corporate rights of companies connected with Russian business in the amount of more than UAH 350 million were transferred to the Agency for Search and Asset Management. Among them is one of Kiev’s largest shopping and entertainment centers Ocean Plaza.

Russia’s seizure of Ukrainian nuclear facilities and other actions of the Russian military that pose danger to these facilities remain a serious threat to both Ukraine and the international community. In this regard, the foreign ministers of the G7 countries issued a statement in which they demand that Russia immediately return full control over Zaporizhzhia nuclear power plant to the Ukrainian authorities and provide safe and unhindered access of the IAEA specialists to all nuclear facilities in Ukraine. For its part, Ukraine urges the UN and the IAEA to send a joint expert mission to stabilize the situation at the Zaporizhzhia NPP.

Partners and allies continue to provide military assistance to Ukraine to help it defend itself against enemy invasion. The United States government has announced $1 billion in defense assistance to Ukraine, including HIMARS missiles, NASAMS air defense missiles, ammunition, mortar and anti-tank systems, and other weapons and equipment. The United Kingdom will transfer to Ukraine three additional multiple rocket launchers and their missiles. Germany has in recent days transferred four more Gepard self-propelled anti-aircraft systems to Ukraine, bringing the total number of units transferred to 12. The first 50 Turkish BMC Kirpi armored vehicles, heavy armored personnel carriers that provide significant protection against mines and ballistic threats, have also been delivered to the Ukrainian front. Another shipment of 150 vehicles is expected shortly. In addition, Denmark and Finland will send instructors to the UK to participate in a training program for the military of the Ukrainian Armed Forces.

Against the background of constant dialogue and effective cooperation between Ukrainian diplomacy and Western partners, the process of providing financial assistance to Ukraine is active. For example, the U.S. State Department announced the allocation of $89 million, which will be used to strengthen Ukraine’s capacity to clear mines and defuse explosive devices left behind by Russian troops.

On August 10, Ukraine signed an additional agreement with the EU on financing the measure “Energy Efficiency Support Program for Ukraine — EE4U,” which provides for extension of the program until 2028 and an increase of €10 million in co-financing from Germany.

Ukraine is looking for ways to protect the interests of citizens who remain on Russian territory amid a breakdown in diplomatic relations between Kyiv and Moscow. It has arranged with Switzerland for the latter to represent Ukrainian interests in Russia. But the Russian Federation does not agree to this because of Switzerland’s accession to the sanctions imposed against Russia.