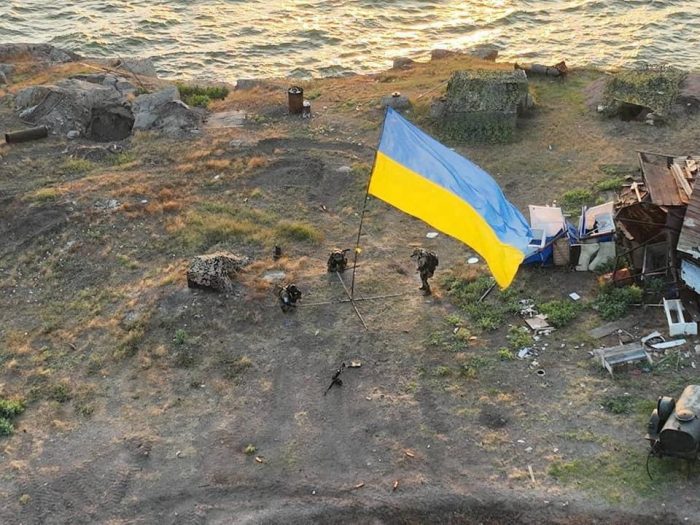 Russian troops in Donbas have taken an operational pause to regroup and prepare for the resumption of active offensive operations. In recent days, the intensity of rocket attacks on Ukrainian rear infrastructure has decreased; however, there has been an increase in the intensity of shelling of civilian facilities in Donbas. At the same time, the Ukrainian Armed Forces continue to use high-precision weapons to hit Russian military depots and other military facilities in the temporarily occupied territories.

The intensity of Russian attacks decreased after the capture of Lysychansk. Russian troops are trying to establish full control of the territory of Luhansk region by advancing in the direction of Siversk. Another goal is the capture of the Vuhlehirsk thermal power plant, which is the most powerful facility of this class in Ukraine. Preparations for an offensive on Sloviansk and Bakhmut are also underway. According to British intelligence, the target of Russian attacks may be the control of a section of the E40 international highway in the Donetsk region.

Russian troops are actively using artillery and aviation along the entire frontline. For example, on July 7, there was an air strike in the center of Kramatorsk. In the town of Chasiv Yar, a railway station building was destroyed; an apartment building was damaged, resulting in civilian casualties. In total, at least 30 people were killed and 59 civilians were wounded in the territory of Donetsk region during July 7-10.

The Ukrainian Armed Forces carried out strikes on facilities used by Russian troops. The targets were military warehouses in temporarily occupied Donetsk and Shakhtarsk (Donetsk region) and Alchevsk (Luhansk region).

Russian troops are launching local attacks to improve their position near Kharkiv and trying to get closer to the city. Shelling of Kharkiv using MLRS is ongoing. Between July 7-10, at least 5 people were killed and 13 others were wounded in the Kharkiv region.

The front line remains stable. Russian troops continue shelling. They are targeting not only the territory of Zaporizhzhia region, but also the nearby areas of Dnipropetrovsk region.

The constant shelling of the Mykolaiv region continues unabated. According to updated data, 18 residents of the region were wounded as a result of the actions of Russian troops on July 6. Over the next days, at least 2 people were killed and 3 civilians were wounded in the region.

In addition, shelling continues in the Kryvyi Rih direction. In the morning, July 9, Russian troops shelled residential areas of Kryvyi Rih from “Grads” killing 2 people and injuring 3 more. As a result of rocket fire, an industrial enterprise in Kryvyi Rih district of Dnipropetrovsk region was destroyed.

At the same time, the Armed Forces of Ukraine destroyed two occupant command posts in Kherson direction, blew up ammunition warehouses and other military facilities in temporarily occupied Kherson, Chornobaivka and Nova Kakhovka.

On July 7, Russian troops launched a missile attack on the territory of Odesa region, including Zmiinyi Island (where Ukrainian flags were restored as a result of a special operation). One of the missiles hit an empty tanker flying the flag of Moldova, which was drifting without a crew in Ukrainian territorial waters.

Artillery and air strikes continue in the Sumy region. Shelling of the border areas of Chernihiv region is also ongoing.

The State Service for Special Communications and Information Protection of Ukraine warns of new cyberattacks by the Russian Federation against Ukrainian state institutions. They are carried out according to the usual scenario – in the format of sending emails, which, upon opening, launch malicious software.

In addition, Russian hackers carried out a powerful attack against Latvia which lasted about 12 hours. They tried to disrupt Latvian public broadcasting.

According to the UN Office of the High Commissioner for Human Rights, as of July 4, the number of civilian casualties in Ukraine since the start of the large-scale Russian invasion is 11,152 (4,889 killed and 6,263 wounded). As of the morning of July 10, more than 995 children (347 children killed, 648 wounded) suffered as a result of the armed aggression of the Russian Federation in Ukraine.

The situation in settlements in the temporarily occupied territories and near the front line remains highly complex. In occupied Mariupol, city residents have no access to water, light or gas. Virtually no medicines or humanitarian aid are available, and there is a severe shortage of food. More than 100,000 Mariupol residents remain blocked in the city.

In the Kherson region, most communities also experience complete or partial lack of water, electricity and gas supplies, Internet and stable mobile communications. Russian occupation authorities block social networks and access to the Internet to create an information vacuum in the occupied territories and facilitate the implementation of their own propaganda campaign.

According to Josep Borrell, EU High Representative for Foreign Affairs and Security Policy, the global food crisis exacerbated by Russia’s war in Ukraine has put 323 million people in the world on the brink of starvation.

The Deputy Chief of the U.S. Mission to the OSCE, Courtney Austrian, revealed that the U.S. has discovered at least 18 filtration camps through which Ukrainians deported to Russia are passing. Those who left Russia after undergoing “filtration” reported interrogations, beatings, and torture of people probably affiliated with the Armed Forces of Ukraine, as well as the cases of disappearances of individuals. After the filtration camps, Ukrainians are transferred throughout the territory of Russia, often to regions in the Far East. According to the U.S. official, this is how the Russian Federation is once again using mass deportation methods in its aggressive policy.

The UN Special Representative of the Secretary General on Sexual Violence in Conflict, Pramila Patten, reported 124 cases of sexual violence committed by the Russian military on the territory of Ukraine. The actual number of rapes may be higher, because due to the temporary occupation of 20% of Ukraine’s territory, it is impossible to promptly record all the crimes committed by the invaders.

The Internet edition “Ukrainska Pravda” reports on the possible preparation of the death penalty for two Azov fighters captured by the Russian military. According to Ukrainska Pravda’s sources, the captives have now been taken to an unknown destination from a colony in the temporarily occupied territories.

In the temporarily occupied Nova Kakhovka (Kherson region), a former Ukrainian police officer, Serhii Tomko, who betrayed his oath and worked in the so-called “law enforcement agencies” of the occupation administration, was liquidated.

The National Bank of Ukraine indicated that Ukraine’s international reserves decreased by 9% during June – as of July 1 they stood at $22.8 billion.

According to the State Statistics Service, inflation in Ukraine accelerated to 21.5% year-on-year in June against 18% in May.

The European Parliament has decided to provide Ukraine with an additional package of macro-financial assistance worth €1 billion in the form of a loan on favorable terms aimed at providing funding for essential government functions. This amount is the first tranche of an exceptional macrofinancial assistance package totaling €9 billion, previously agreed by the European Commission. However, the loan is blocked by the European Commission’s budget unit because of concerns about its financial credibility.

The Kyiv city administration reports that 86% of enterprises in the capital resumed operations in June; capacity utilization increased to 60%.

The Danube-Black Sea Canal has resumed navigation after the liberation of Zmiinyi Island. It can be used to export agricultural products. At the same time, Russian troops continue to carry out planned attacks on the Ukrainian agricultural sector. There have been recorded shelling of agricultural land with incendiary shells aimed at destroying crops.

Expressing support and solidarity with the Ukrainian people, representatives of international parliaments are making visits to Kyiv. On July 7, Ukrainian President Volodymyr Zelenskyi met with US Senators Lindsey Graham and Richard Blumenthal, who represent the Republican and Democratic parties of the United States. During the meeting, the head of state briefed the Senate representatives on the situation on the frontline and urged the senators to support the decision to provide Ukraine with modern air defence systems. For their part, Lindsey Graham and Richard Blumenthal spoke about the work they were doing in the Senate to have Russia recognized as a state sponsor of terrorism.

On July 9, the Ukrainian President held a meeting with Gérard Larcher, President of the Senate of the French Republic, and a delegation of the upper house of the French parliament, which was on a visit to Ukraine. The sides discussed further increase of assistance to Ukraine’s defense forces as well as post-war reconstruction.

Ukraine continues to receive support from Western partners, in particular financial and defense assistance. Ukrainian Prime Minister Denys Shmyhal announced that the state will receive a $1.7 billion grant. The money will be used to cover the costs of the state budget to pay for medical services under the programme of medical guarantees. Their allocation will be realized through a fund created by USAID, the International Bank for Reconstruction and Development and the International Development Association. In addition, the U.S. allocated $368 million for humanitarian aid.

President Joe Biden approved a new defense package for Ukraine worth approximately $400 million, which includes four HIMARS multiple launch rocket systems, ammunition for them, as well as shells for 155mm howitzers and other equipment.

Canada has significantly expanded sanctions against Russia. Canadian Foreign Minister Melanie Joly announced her intention to impose additional sanctions covering mining, chemical and other industries. Also, the restrictive measures will affect 15 legal entities controlled by the Russian government and 29 individuals spreading disinformation about the war in Ukraine. At the same time, the Ukrainian side is concerned about the Canadian-German agreement on the supply of a turbine for the Nord Stream-1 gas pipeline. This sets a negative precedent for exclusion from the sanctions regime.

The management of the Council of Europe Development Bank (CEB) decided to grant Ukraine fast-track membership. The Bank’s Board of Administration also approved five new loans worth €465 million, most of which will be used to support refugees from Ukraine in the CEB’s member states. Membership in CEB will open up additional opportunities to provide housing for Ukrainians affected by the war; render social services; and rebuild hospitals, schools and kindergartens.

Volodymyr Zelenskyi made a working trip to Dnipropetrovsk region, during which he visited the front-line positions of the Ukrainian military and the regional clinical hospital where servicemen are treated.