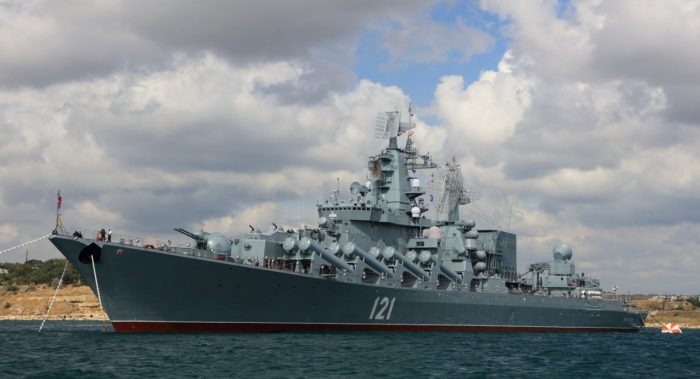 Russian troops are strengthening their groups for an offensive in eastern Ukraine and storming Mariupol. Rocket and bomb attacks on military and civilian infrastructure in Kharkiv, Donetsk and Zaporizhzhia regions continue. Fighting continues in Luhansk region.

On the night of April 12-13, a missile strike was launched against an infrastructure facility in Chudniv (Zhytomyr region). There were no fatalities or casualties.

The Russian side is threatening to launch strikes on “decision-making centers,” including in Kyiv, if the Ukrainian military continues to carry out “sabotage on Russian territory”. This statement was made during a briefing by the speaker of the Ministry of Defense of the Russian Federation.

In the Kharkiv region, the situation remains acute in the Izium direction, where the Ukrainian Armed Forces are fighting defensive battles to prevent Russian troops from breaking through to the Donetsk and Luhansk regions from the north.

Russian troops continue to partially blockade and shell Kharkiv. According to Oleh Syniehubov, head of the Kharkiv Regional Military Administration, they launched approximately 53 artillery and MLRS strikes against the region over the past 24 hours (April 12). As a result of the attacks, 7 people were killed and 22 injured (including 3 children). On April 13, 4 civilians were killed and 10 injured as a result of the shelling in Kharkiv.

At the same time, Oleh Syniehubov stated that the Armed Forces of Ukraine hold their positions and have success in the Rohan and Derhachi directions.

In the Luhansk region, Russian troops are conducting assault actions near Sievierodonetsk, Rubizhne and Popasna. During the day, they shelled Novodruzhesk, Rubizhne, Nyzhnie and Zolote.

The main efforts of Russian forces in the Donetsk region are concentrated on capturing parts of the city of Mariupol. The 36th Separate Marine Brigade of the Ukrainian Navy suffered significant losses, but as part of the tactical regrouping, the unit of marines has managed to link up with the fighters of the Azov Regiment.

There is also fighting in the districts of Sloviansk and Kurakhove.

Russian forces continue shelling Donbass. The head of the Donetsk Regional Military Administration, Pavlo Kyrylenko, stated that the Russian military launched a rocket attack on the village of Cherkaske. In addition, Avdiivka and Velyka Novosilka were shelled. According to the Regional Administration, at least 10 civilians were wounded during the day (8 in Cherkaske; 1 each in Bahatyr and Komyshuvate).

Rocket and bomb strikes continue on the territory of Zaporizhzhia region. Ivan Arefiev, spokesman for the Zaporizhzhia Regional Military Administration, indicated that the Russian military used phosphorus munitions in the village of Novodanylivka in Zaporizhzhia.

Ukrainian media, citing the head of the Odesa Regional Military Administration Maksym Marchenko and their own sources in the Ukrainian intelligence, report that the anti-ship Neptune missiles struck the Moskva missile cruiser of the Russian Black Sea Fleet. Russian official sources do not mention the missile attack, but confirmed that the ship sustained significant fire damage.

The General Staff of the Armed Forces of Ukraine reports that fighting is continuing in the Kherson region near Oleksandrivka. Russian forces are also trying to regain positions lost near Osokorivka.

The Zaporizhzhia Regional Military Administration reports that Russian propagandists are preparing a new fake about an allegedly found storage facility with explosives in Enerhodar, where the Zaporizhzhia nuclear power plant is located, to discredit the Armed Forces of Ukraine.

The BBC stated that the BBC News-branded video, which seems to suggest that Ukraine was responsible for the April 8 rocket attack on the train station in Kramatorsk, is a fake. The company urges not to spread it, and is taking steps to remove it from the Internet.

Kyrylo Tymoshenko, deputy head of the Presidential Office, reported that despite the non-operation of “green corridors,” during April 13, 1,567 people evacuated from the zone of hostilities in their own vehicles. 1,102 people left occupied cities in Zaporizhzhia region; 83 people left Mariupol; and 382 people managed to evacuate from cities in Luhansk region.

Ombudsman Liudmyla Denisova reports that 20 journalists, including representatives of foreign media, have been killed in Ukraine since the Russian invasion began.

Mariupol Mayor Vadym Boychenko has informed that as of April 13, some 120,000 more residents remain in Mariupol, which is blockaded by the Russian military. There are also about 60,000 more people waiting to be evacuated in populated areas around Mariupol.

The Main Directorate of Intelligence of the Ministry of Defense of Ukraine reports that in order to conceal evidence of crimes committed against civilians, the Russian troops began to use mobile crematoria. In particular, the presence of 13 mobile crematoria was recorded in Mariupol.

The head of the Sumy Regional Military Administration Dmytro Zhyvytskyi revealed that more than 100 civilians were killed on the territory of the Sumy region due to the actions of the Russian military. This figure increases every day after new bodies are discovered (often with signs of torture).

The Prosecutor General reports that on April 12, in the village of Pravdyne (Kherson region) Russian servicemen shot 6 men and 1 woman in a residential house. After that, intending to hide the crime, they blew up the house with the bodies of the executed people.

Ombudsman Liudmyla Denisova reported about the capture by the Russian military of the crews of two civilian vessels on the territory of the Mariupol port. On April 10, the crews of the Azburg (12 Ukrainian citizens) and the Lady Augusta (crew consists of Syrian citizens) were taken to temporarily occupied Donetsk. Their further fate is unknown.

The deputy of the Kherson regional council Serhii Khlan informed about the kidnapping by the Russian military of the Skadovsk district council deputy Volodymyr Kurikov.

According to the OSCE report, Russia violated international humanitarian law and committed war crimes by deliberately attacking civilians during the invasion of Ukraine.

The NBU informed that despite the fact that the systemic risks to financial stability in war conditions are high, the situation remains controllable, and banks have a high liquidity cushion. In particular, the volume of customer funds in all currencies has increased by 41 billion UAH since the beginning of hostilities.

Real estate portal LUN reports that the real estate market in Ukraine is making the first steps to recovery. In Odesa, Lviv, Uzhhorod, Khmelnytskyi, Vinnytsia and other cities, people begin to invest in new buildings.

President Alar Karis of Estonia, President Egils Levits of Latvia, President Gitanas Nauseda of Lithuania and President Andrzej Duda of Poland arrived in Kyiv, where they met with Ukrainian President Volodymyr Zelenskyi. As part of the visit, the politicians visited Borodianka, where they witnessed the consequences of the Russian occupation. As a result of the visit, they noted the need to bring those responsible for war crimes committed against Ukrainians to justice; the importance of providing arms aid to Ukraine, as well as strengthening sanctions against Russia (in particular, imposing a full embargo on Russian oil and gas and sanctions against all Russian banks). In his turn, Volodymyr Zelenskyi noted the role of the presidents of Estonia, Latvia, Lithuania and Poland in providing comprehensive support to Ukraine.

Ukrainian President Volodymyr Zelenskyi addressed the Estonian parliament. He drew historical parallels between Russian aggression against Ukraine and the Soviet Union’s occupation of Estonia, thanked Estonia for its support, and called for increased sanctions pressure on Russia.

President of Ukraine Volodymyr Zelenskyi had a telephone conversation with US President Joe Biden, during which he discussed an additional package of defence and possible macro-financial support, as well as an agreement on tougher sanctions. After his conversation with Zelenskyi, Biden declared that the United States would provide Ukraine with an additional $800 million in military aid. It will include artillery systems and ammunition and armored personnel carriers.

The Council of the European Union approved a third tranche of 500 million euros from the European Peace Facility (EPF) to supply Ukraine with arms.

Canadian Prime Minister Justin Trudeau stated that he considered it appropriate to use the term “genocide” in relation to the actions of the Russian army in Ukraine. Colombian President Ivan Duque also called Russia’s actions in Ukraine genocide. French President Emmanuel Macron said he would not use the word “genocide” because the Russians and Ukrainians are “fraternal” peoples. The Ministry of Foreign Affairs of Ukraine replied to Macron that “fraternal” people do not kill children.

Volodymyr Zelenskyi made a statement that he had not received an official request from German President Frank-Walter Steinmeier to visit Ukraine. The corresponding statement was made in response to information about the alleged refusal of Steinmeier to meet with the President of Ukraine the day before.

The UK imposed sanctions against another 206 individuals and entities supporting Russia’s war against Ukraine (including Viktor Medvedchuk, who was detained the day before – all his assets in the UK have been frozen. Russian oil tycoon and major shareholder of Lukoil Vagit Alekperov was also on the list). In addition, since April 14 Britain banned the import of Russian cast iron and steel, as well as exports to Russia of quantum technologies and advanced materials. Also, more than 7 billion dollars belonging to Roman Abramovich, were frozen by the authorities in the offshore zone of the island of Jersey.

Karim Khan, chief prosecutor of the International Criminal Court, who visited the Ukrainian city of Bucha, called Ukraine a “crime scene” and stressed the need for an independent investigation.

Russia was not re-elected to a number of bodies in the UN system: the UN Committee on Non-Governmental Organizations, as well as the executive offices of the UN Children’s Fund (UNICEF) and UN Women. In addition, the Russian Federation failed to renew its membership in the Permanent Forum of Indigenous Issues.

The Ministry of Finance stated that Ukraine had signed a loan agreement with the Government of Canada to provide Ukraine with 500 million Canadian dollars on preferential terms.

The European Space Agency terminated cooperation with the Russian Federation in organizing expeditions to the moon due to the Russian invasion of Ukraine.

The resumption of work of diplomatic missions in Ukraine continues. On April 13, the Embassy of the Czech Republic returned to work in Kyiv; the Embassy of Moldavia in Ukraine plans to resume its activity on April 15.