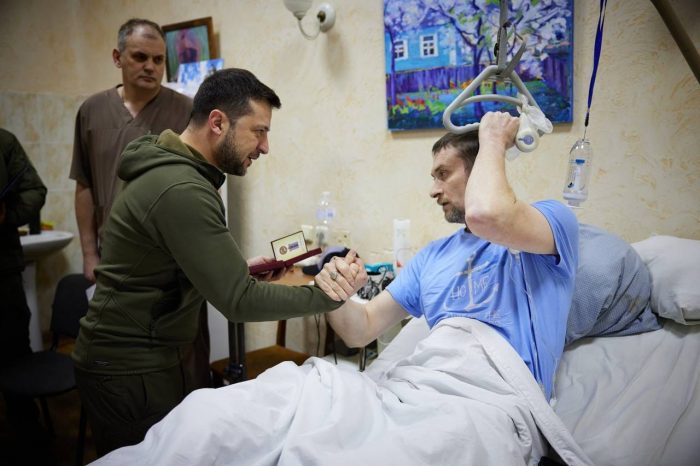 Total combat losses of Russian troops from 24.02 to 13.03. were estimated at over 12 thousand people, over 374 tanks, 1,826 armored vehicles and automotive equipment and 160 aircrafts (planes and helicopters). The Russian Federation recruited a large number of mercenary fighters from other countries, such as Syria and Serbia, to replenish its losses.

The Russians launched an artillery strike on the Pushcha-Vodytsia psycho-neurological boarding school near Kyiv. The staff and wards were evacuated in advance.

On March 13, two American journalists came under fire from Russian troops at a checkpoint in Irpin. One of them, Time documentary filmmaker Brent Reno, was killed, while the other, photojournalist Juan Arredondo, was hospitalized with wounds.

Chernihiv continued to be under heavy fire from the Russian army.  As of 11:50, the fire in a nine-story dormitory in Chernihiv, which occurred as a result of the airstrike, had been extinguished.

In Chernihiv Region, the Armed Forces of Ukraine defeated a tank column of the Russian Army that had been breaking through to Kyiv.

In Severodonetsk, Lysychansk and Rubizhne, the shelling damaged about 60 buildings, including 22 apartment buildings. 1 dead and 1 wounded were identified.

Mariupol, which is under siege, was under constant heavy shelling. In 24 hours, there were at least 22 bombardments of the city. A total of about 100 air bombs have already been dropped on Mariupol.

Russian forces continued to accumulate reserves for an offensive on Vuhledar and were launching artillery strikes on residential areas of the city.

Russian troops shelled the Avdiivka coke and chemicals plant, which forced a shutdown of the thermal power plant that provides the city with heat and hot water.

The head of Zaporizhzhia Region, Oleksandr Starukh, reported the kidnapping of Dniprorudne mayor Yevhen Matveev. It also became known about the kidnapping of the chairman of the Melitopol district council Serhii Pryima. The invaders were purposefully kidnapping representatives of legally elected authorities and activists.

On March 13, Russian soldiers shelled a school in Zelenyi Hai, a village in Mykolaiv region, killing four people and injuring three others.

The Russian military has focused its main efforts since the beginning of the day on advancing in the direction of Kryvyi Rih.

The mayor of Ivano-Frankivsk reported that on the night of March 13, Russian aggressors launched the second missile attack on the local airport in three days.

At a morning press conference, the head of the Lviv Regional Military Administration spoke about the nighttime Russian missile strike at the Yavoriv military training ground in Lviv region. In particular, according to him, the enemy fired 30 cruise missiles at once at this facility. It was also reported that the Ukrainian air defense system went off, shooting down a certain number of missiles. The attack killed 35 people and injured 134 more.

In Rivne region, a TV tower was damaged in the morning of March 14 as a result of the airstrike.

In Zaporizhzhia region, despite the ban on rallies and demonstrations in Melitopol, voiced from loudspeakers of the invaders’ military equipment, local residents continued to come out for pro-Ukrainian rallies.

Residents of Kherson continued to hold an indefinite rally of many thousands against the Russian invaders, despite the fact that dozens of armed Russian soldiers and many vehicles were standing around. According to preliminary data, about 10 thousand residents of Kherson came out for the action.

Russia continued to prepare and disseminate propaganda. To increase the amount of material, the Russian Federation prepared manuals for creating fakes. This manual clearly provided instructions on how to conduct misinformation of people and explained a particular technique, referring to the knowledge of “Ukrainian psychology”.

In order to consolidate Russian society around support for the war with Ukraine, Russian special services are planning an operation aimed at discrediting Ukrainians living in Russia. As part of the special operation, it is planned to organize Ukrainianization of rallies in the Russian Federation, implement violent provocations and conduct propaganda events in order to explain to Russian citizens the inalternative nature of the war with Ukraine.

Information about the ability to withdraw cash at ATMs from March 12 due to the failure of the electronic payment system was actively disseminated on social networks and messengers. The National Bank of Ukraine reported that this was a fake and hostile provocation aimed at destabilizing the situation inside the country and spreading panic and dissatisfaction with the current authorities.

On the 13th day, the siege and bombing of the city of Mariupol by Russian troops continues.  The humanitarian convoy, organized by the Ukrainian side, once again failed to reach Mariupol and evacuate people as the Russians continue to attack the city from the air. The embassies of Greece and Turkey, the OSCE mission and the International Committee of the Red Cross are also calling for evacuation from Mariupol, calling for the rescue of their citizens and workers.  As of March 13, 2187 local residents were killed in Russian airstrikes in Mariupol. The aggressors are deliberately beating residential buildings, crowded places, destroying children’s hospitals and completely destroying the city’s infrastructure.

On the night of March 12-13 near the station. Brusyn in the Donetsk region from the shelling of Russian troops damaged a passenger train, which was to carry out an evacuation flight on the route “Kramatorsk-Lviv”. As a result of the train being destroyed by debris during the shelling, one person died and another was injured.

A total of 85 children have died during the fighting in Ukraine on this day. The Justice for Journalists Foundation (JFJ) has documented at least 35 attacks on journalists in Ukraine since the start of Russia’s full-scale war.

The Office of the United Nations High Commissioner for Refugees has reported 2,698,280 people who left Ukraine as of March 13.

EU High Representative for Foreign Affairs and Security Policy Josep Borrell also strongly condemned the abduction of the mayors of Melitopol and Dniprorudny by the Russian armed forces.

Admiral Rob Bauer, chairman of the NATO Military Committee, said Russia’s attack on the International Peacekeeping and Security Center at the Yavoriv test site near the Polish border was a “clear signal” to the West about arms supplies to Ukraine. However, Bauer stressed that the supply of weapons does not violate any international rules.

In his public speech on March 13, the head of the Vatican, Pope Francis, made a statement in support of Ukraine. He called “barbaric” the actions of the Russian army during the siege and bombing of Mariupol. The pope also called on the aggressor to stop the attack on Ukraine.

– Four organizations that provide accreditations to world universities have decided to suspend all activities related to membership and accreditation in Russian institutions in solidarity with Ukraine.