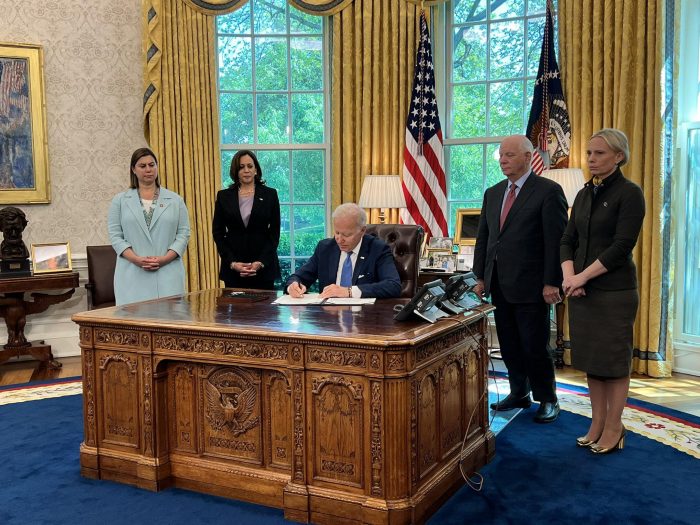 Russian troops continue their offensive in Donetsk and Luhansk regions. Their efforts are concentrated on forcing the Siverskyi Donets River, through which the front line runs, and reaching the rear of the grouping of the Ukrainian Armed Forces. Preparation for a possible Russian offensive in the south in the direction of Mykolaiv and Kryvyi Rih is recorded. Instead, as a result of a counterattack, the Armed Forces of Ukraine managed to push Russian units away from Kharkiv.

Russian forces continue to conduct systematic strikes from their own territory against Ukrainian border population centers. During May 9-11, they fired mortars and rockets at a number of communities in Chernihiv and Sumy regions. On the night of May 11-12, an airstrike was launched against the infrastructure of Novhorod-Siverskyi, which is 40 km from the border with Russia.

As a result of the counterattack by the Armed Forces of Ukraine, Russian forces were forced to retreat from Kharkiv. The immediate threat to the city has significantly diminished. In the Izium direction, Russian units are being regrouped and reinforced in preparation for the resumption of the offensive. This proves the failure of the Russian command’s preliminary calculations to break through the Ukrainian Armed Forces’ defenses and quickly reach the rear of the Ukrainian units operating in the area of the Joint Forces Operation.

At the same time, Russian troops continue to carry out missile strikes against civilian infrastructure in Kharkiv region. In particular, on May 11, the strike destroyed a train of agricultural products, killing one person.

In Luhansk region, Russian troops attempted to force the Siverskyi Donets River, which gives them an opportunity to get behind the Ukrainian Armed Forces group defending the Rubizhne-Sievierodonetsk-Lysychansk agglomeration. However, Ukrainian units are successfully defending in this area. According to Serhii Haidai, head of the Luhansk Regional Military Administration, they have destroyed a pontoon crossing over the Siverskyi Donets and continue mopping up the area from enemy forces.

In the south of Donetsk region, Russian troops continued to launch air strikes on the territory of the Azovstal plant in Mariupol. The storming of the facility guarded by Ukrainian units continues. In the north of the region, Russian forces continued their offensive towards the town of Lyman, forcing the Siverskyi Donets River; they also continue to attempt to advance in other parts of the front. The shelling of towns in the Donetsk region continues. Russian troops launched several strikes against the city of Sloviansk.

Russian troops continue to shell populated areas in Zaporizhzhia region and attempt to launch missile strikes against Zaporizhzhia. On May 11, air defense forces shot down one missile near the city, but its debris fell on an infrastructure facility and damaged it.

The shelling of territories in Dnipropetrovsk region bordering Kherson region on the right bank of the Dnipro River continues. In particular, during May 10-12, Russian troops shelled populated areas in the Kryvyi Rih direction several times with artillery.

In the Poltava region, Russian troops launched another missile strike that damaged infrastructure.

Rocket attacks continue in the Odesa region. Once again, a strategically important bridge over the Dniester estuary, through which the road to Romania passes, was struck. Russian troops are trying to cut off the Bessarabian part of the region and block the communication routes between Ukraine and its partner states. In addition, according to British intelligence, they are making efforts to strengthen the garrison on the temporarily occupied Zmiinyi Island. Thus, the Russian troops are trying to ensure their dominance in the northwestern part of the Black Sea, at the same time, they are escalating the situation in Transnistria, where the Russian contingent and local militia are in full combat readiness. This poses an additional threat to the security of Odesa.

Rocket attacks on the city of Odesa continue to be carried out. On May 9 and 10, the missiles targeted tourist and civilian infrastructure and storage facilities. In particular, one of the city’s shopping centers and food warehouses received major damage.

The General Staff of the Armed Forces of Ukraine reported that the Russian military was preparing to set up pontoon-bridge crossings across the Dnipro River near Nova Kakhovka in the Kherson region. This could mean preparations for a new offensive against Mykolaiv or Kryvyi Rih.

On May 9, there were hacker attacks on the Russian television network. As a result, anti-war rhetoric appeared in the broadcasts of Russian satellite TV channels. Moreover there was a cyber attack on Rutube video hosting, the Russian alternative to YouTube.

Also on May 9, the main page of the Russian online media outlet Lenta published materials critical of the aggression against Ukraine. Several journalists of the news website took responsibility for the incident, deliberately replacing the texts of the news published on the site with anti-war articles and those critical of Vladimir Putin.

According to the Office of the UN High Commissioner for Human Rights, as of May 10, the number of civilian casualties in Ukraine since the beginning of the large-scale Russian invasion on February 24, 2022 is 7,256 (3,496 killed and 3,760 wounded). These figures are only preliminary — the real number of casualties is higher, as information from some locations where intense fighting is ongoing is delayed and many reports are still awaiting confirmation. Most recorded civilian casualties were caused by the use of explosive weapons with wide-area effects, including heavy artillery and multiple rocket launchers, as well as missile and air strikes.

The key humanitarian issue in Mariupol remains the release of Ukrainian military personnel stranded at the Azovstal plant. For the time being, it is impossible to unblock the facility militarily. The defenders of the plant refuse to surrender. At the same time, the Russian military do not agree to the extraction procedure, although a petition to UN Secretary General Guterres to use it gathered more than 1 million signatures in a few days. The situation is complicated by the fact that despite the evacuation of civilians, according to various estimates, about 100 civilians still remain at the plant, and conditions for them are getting worse every day. The Minister for Reintegration of the Temporarily Occupied Territories Iryna Vereshchuk reported that negotiations were underway to exchange the severely wounded soldiers from the Azovstal plant for Russian prisoners of war.

Russian troops continue to forcibly deport the Ukrainian population from the temporarily occupied territories to Russian territory. According to Iryna Vereshchuk, almost 460 thousand Ukrainians have been forcibly transferred to filtration camps. More than 6,500 such camps have already been established in Russia. Among the deported are not only adults, but also more than 10 thousand children, including orphans and children deprived of parental care.

According to Hans Kluge, head of the European Regional Bureau of the World Health Organization, at least 3,000 people have died in Ukraine since the beginning of Russia’s large-scale invasion due to lack of access to treatment for chronic diseases (such as HIV/AIDS, cancer, etc.).

The European Bank for Reconstruction and Development has downgraded its forecast of Ukraine’s economic decline because of the war to 30%, although at the end of March the forecast was 20%.

The State Statistics Service of Ukraine reported that inflation in Ukraine is accelerating in April — up to 16.4% on an annualized basis. The National Bank of Ukraine informed that the main factors behind the acceleration of inflation were disruption of supply chains, increased business expenses, physical destruction of assets and uneven supply and demand of goods in the regions.

The Office of the President revealed that the International Working Group on Russian Sanctions elaborated recommendations — the Roadmap of energy sanctions.

Following the Polish-Ukrainian energy forum in Warsaw, Minister of Economy Yuliia Svyrydenko reported that owing to Polish transit, Ukraine would soon be able to receive fuel from the United States, the Netherlands and other countries. This will reduce the shortage of fuel within the country, which has been observed over the past two weeks after the destruction of the Kremenchuk oil refinery as a result of shelling.

During a working trip to Odesa with the President of the European Commission Charles Michel, Prime Minister Denys Shmyhal stated that Ukraine loses $170 million every day because Russian troops block Ukrainian sea ports (up to 90 million tons of agricultural products ready to be exported are blocked in total). This issue is particularly pressing not only economically, but also from a humanitarian point of view, because it may cause a food crisis in the states of the Middle East and Africa, which are the main importers of Ukrainian agricultural products.

On May 9, U.S. President Joe Biden signed the Lend-Lease Act to provide strategic defense support to Ukraine. According to the law, in 2022-2023, the U.S. will be able to lend or lease defense products to both Ukraine and Eastern European states affected by the consequences of Russia’s armed aggression on an expedited basis and on favorable terms. Such products could include modern missile defense systems, fighter jets, tanks, aircraft, self-propelled artillery systems, infantry fighting vehicles, air defense systems, ammunition, etc. Relevant U.S. assistance could play a key role in further repulsing the Russian military offensive and liberating the temporarily occupied territories of Ukraine.

Other states also continue to actively support Ukraine, demonstrating their solidarity and condemning Russian aggression. The Lithuanian Seimas unanimously adopted a resolution recognizing Russia’s war against Ukraine as a genocide of the Ukrainian people and Russia as a country that supports and practices terrorism. Seimas deputies also advocated the creation of a special international criminal tribunal to investigate and assess the Russian aggression and prosecute the perpetrators. The Senate of the Czech Republic (Upper Chamber of Parliament) also recognized the crimes committed by the Russian army in Ukraine as genocide of the Ukrainian people.

Ukraine continues to carry out the necessary procedures as part of the European Union integration process. Ukrainian President Volodymyr Zelenskyi announced that the second part of the completed questionnaire for Ukraine’s candidate status for EU membership had been handed over. European Commission President Ursula von der Leyen said that the decision on granting Ukraine candidate status might be taken as early as June. At the same time, the Office of the President of Ukraine reacted negatively to French President Emmanuel Macron’s proposal to create a new European cooperation format for Ukraine as it is perceived as an attempt to substitute a real integration process with symbolic ineffective initiatives.

The Ukrainian authorities continue to work actively in the international arena to consolidate partner forces to counter Russian aggression. President Zelenskyi addressed the parliaments of Slovakia and Malta, urging those states to increase sanctions and economic pressure on Russia. He also held talks with German Chancellor Olaf Scholz, during which he discussed the topic of defense assistance and cooperation in the energy sector. Zelenskyi also had a similar conversation with Magdalena Andersson, prime minister of the Kingdom of Sweden.

The visits of foreign officials and politicians to Ukraine demonstrate the level of attention of the international community to the Russian-Ukrainian conflict. On May 9, Charles Michel, head of the European Council, arrived in Odesa with Ukrainian Prime Minister Denys Shmyhal. He met with local government leaders and held talks with Volodymyr Zelenskyi online. On May 10, German Federal Foreign Minister Annalena Baerbock and Dutch Foreign Minister Wopke Hoekstra arrived in Ukraine. The ministers expressed support for Ukraine on its path to EU membership, and discussed economic support and the reconstruction of Ukrainian infrastructure, which has been damaged by the fighting, at the meeting with President Zelenskyi.

As a measure to counter Russian influence and ensure the stability of the state’s economy, President Zelenskyi submitted a decree to the Verkhovna Rada on May 11 to forcibly seize Russian property in Ukraine. The confiscated resources should be used to protect the state sovereignty, territorial integrity and independence of Ukraine, as well as its national interests in the face of Russia’s full-scale war against Ukraine.