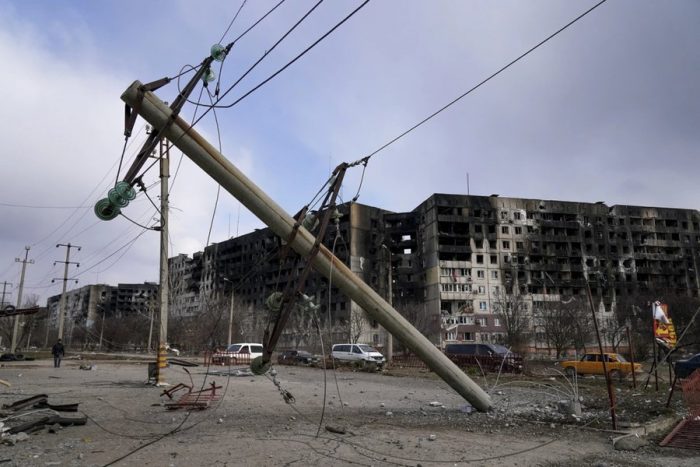 Donetsk, Luhansk and Kharkiv regions remain hot spots of the Russian-Ukrainian conflict. Russian troops are conducting offensives in the area of the Joint Forces Operation.

Representatives of the Azov Regiment reported the use of chemical weapons against them in Mariupol. Previously, Russian troops did not rule out such a possibility when commenting on the course of fighting in Mariupol.

The situation remains most acute in the Izium direction, where active hostilities are taking place.

Russian troops continue their partial blockade of Kharkiv and shelling of the region’s territory. According to Oleh Syniehubov, head of the Kharkiv Regional Military Administration, on April 10 they launched about 66 strikes from artillery, mortars and MLRS. Kharkiv districts, the outskirts of the city and other population centers in the region (Zolochiv and Balakliia) were affected. Throughout April 11, the shelling continued. As a result, 8 people (including 1 child) were killed; 19 people (including 2 children) were injured. In addition, the Kharkiv Regional Military Administration reported that Russian troops were actively using delayed-action mines in Kharkiv.

In Luhansk Region, according to the General Staff of the Armed Forces of Ukraine, a Tochka-U tactical missile system was used during the shelling of Popasna. Russian troops also shelled Sievierodonetsk, Lysychansk and Kreminna. In Lysychansk, the body of 1 person was found dead; 3 more people were injured by the shelling. The State Emergency Service informs that 3 people were wounded in Kreminna.

In Mariupol, Russian troops are carrying out assault actions in certain areas of the city. The General Staff of the Armed Forces of Ukraine considers it likely that they will also advance in the direction of Kurakhove in order to reach the administrative boundaries of the Donetsk region.

According to the State Emergency Service, the shelling damaged 30 houses in the village of Mykhailivka in the Donetsk region. The Donetsk Regional Military Administration reports that at least 3 people were killed (in Vuhledar, Mykhailivka and Krasnohorivka) and 8 people were wounded in the region on April 11. Information about civilian casualties in Mariupol also continues to be received. However, due to the complexity of the situation in the city, it is impossible to keep track of the exact number of fatalities.

Pavlo Kyrylenko, head of the Donetsk Regional Military Administration, reported that most of the civilian population in the Ukrainian-controlled part of the region has been evacuated due to the intensification of hostilities.

Russian troops are trying to gain a foothold on the administrative borders of the Kherson region.

Vitalii Kim, head of the Mykolaiv Regional Military Administration, reported that Russian missiles fired late in the evening on April 10 hit the hangars of a Qatari company in Mykolaiv Region.

Minister for Reintegration of the Temporarily Occupied Territories Iryna Vereshchuk reports that 4,354 people were evacuated through humanitarian corridors on April 11. From Mariupol and Berdiansk, 3854 people (556 Mariupol residents and 3298 residents of Zaporizhzhia region) reached Zaporizhzhia by their own transport and buses for evacuation. 500 people were evacuated in Luhansk region.

As of April 10, the Office of the UN High Commissioner for Human Rights recorded 4,335 civilian casualties (1,842 people killed, 2,493 wounded) in Ukraine as a result of an attack by the Russian Federation. As of April 11, according to juvenile prosecutors, more than 525 children were injured in Ukraine (183 children killed and more than 342 injured).

According to the Minister for Reintegration of the Temporarily Occupied Territories, Iryna Vereshchuk, there are about 1,700 Ukrainian military and civilians in Russian captivity, including 500 women.

According to the KSE Institute, during the active phase of the Russian-Ukrainian conflict in Ukraine at least 23,000 kilometers of roads and 37,000 square meters of housing have been damaged, destroyed or seized. Ukrainian President Volodymyr Zelenskyi reported that 938 educational facilities and nearly 300 hospitals had been destroyed as a result of Russian attacks in Ukraine. Minister of Culture and Information Policy Oleksandr Tkachenko said that the Russian military have already damaged or destroyed at least 166 cultural monuments in Ukraine. Oleh Bondar, the head of Department for the Organization of Pyrotechnic Works and Humanitarian Demining of the State Emergency Service, reports that about 300 thousand square kilometers of Ukrainian territory are in need of humanitarian demining.

Rescuers are removing the rubble of houses in Borodianka, which was destroyed by the Russian military in the Kyiv region. According to Volodymyr Demchuk, Director of the Emergency Response Department of the State Emergency Service, the work is being carried out 24 hours a day. About 300 people are involved, including 70 volunteers working together with rescuers.

Ombudsman Liudmyla Denisova informs that about 4 million chickens have already died at an enterprise in Kherson region due to Russian shelling, which interrupted the power supply to the facility and made it impossible to maintain it. This threatens the region with an ecological catastrophe.

Deputy Minister for Communities and Territories Development Natalia Kozlovska said that Ukraine began the process of inspecting buildings and structures destroyed and damaged in the fighting to determine the possibility of their further operation, reconstruction work or dismantling. Currently, the first group of experts has left for Kyiv region.

The Press Service of the Government of Ukraine reports the launch of an online platform to help move businesses from active combat zones to a safer location.

The Press Service of Enerhoatom indicated that according to preliminary estimates, the material damage as a result of the shelling of the Zaporizhzhia nuclear power plant is 18.3 billion UAH.

According to the Ministry of Finance, Ukraine received another tranche of 44.5 million euros from the International Bank for Reconstruction and Development under the loan agreement “Additional Loan for the Second Economic Recovery Development Policy Loan”.

According to the Ministry of Agrarian Policy Ukraine and Lithuania will test an alternative route for the export of Ukrainian grain via the Baltic Sea.

Volodymyr Zelenskyi addressed the Parliament of the Republic of Korea. He spoke about the fight against the Russian invasion and the crimes committed by the Russian military on Ukrainian territory, calling on to provide Ukraine with the necessary weapons.

Ukrainian Prime Minister Denys Shmyhal held a meeting with the Prime Minister of the Republic of Lithuania Ingrida Šimonytė. The politicians visited Borodianka (Kyiv region) together to see the aftermath of Russian troops. The two prime ministers discussed the investigation of Russian war crimes and the tightening of sanctions against Russia. An agreement was concluded on cooperation in protecting children affected by the war in Ukraine.

Ukrainian Prime Minister Denys Shmyhal also held an online meeting with members of the United States Congress. The head of the government discussed support for Ukraine in overcoming the consequences of aggression and called for increased sanctions pressure on Russia.

A technical team from the French Ministry of the Interior has arrived in Ukraine to investigate Russian army war crimes on Ukrainian territory. It will also contribute to the investigation by the International Criminal Court.

International sanctions pressure on Russia is intensifying. Canada imposed new restrictions on 33 enterprises of the Russian defense sector, which provide for freezing the funds and property of the sanctioned companies and stopping any cooperation with them. The European Commission placed 21 Russian airlines on the EU Air Safety List, which includes air carriers that are banned from operating in the Union as a result of failing to meet safety standards. Japan froze the assets of 398 Russians and a number of institutions, including Alfa Bank and Sberbank.