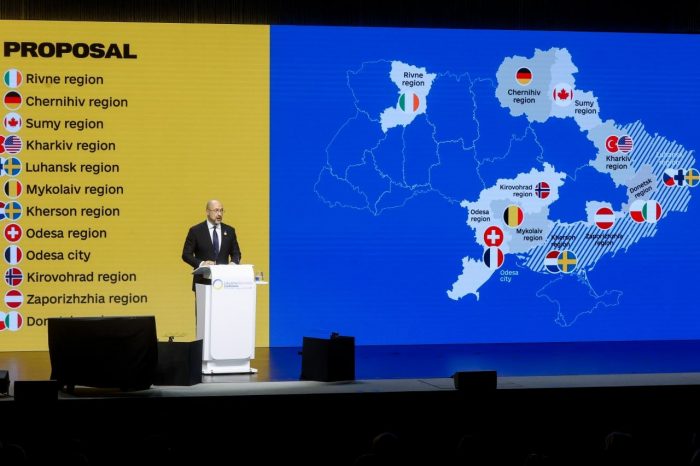 After the seizure of Lysychansk, Russian troops took an operational pause due to significant losses. At the same time, they continue attacks near Bakhmut and Siversk, and are preparing for an offensive on Sloviansk. In other parts of the front, intensive shelling continues. The Armed Forces of Ukraine are targeting Russian infrastructure in the temporarily occupied territories.

After capturing Lysychansk, Russian forces continue their offensive in the direction of Siversk and Bakhmut, trying to prevent the Ukrainian Armed Forces from consolidating their new positions and eventually reaching the Sloviansk-Kramatorsk agglomeration from the east. While simultaneously advancing towards Sloviansk from the northwestern direction, they are trying to improve the tactical position of their units and shelling the city itself.

In other parts of the front, Russian troops are conducting shelling and air strikes. They are especially intense near Avdiivka. There was also a rocket attack on the town of Toretsk on 6 July. In total, at least 14 people were killed and 27 injured in the Donetsk region during the period of July 4-6.

The Armed Forces of Ukraine attacked the infrastructure of Russian troops in the temporarily occupied territories. As a result of the shelling of Donetsk, the area of the city railway station, an oil depot and an ammunition depot were hit. Russian army depots in Kadiivka and Makiivka were also destroyed.

In the Kharkiv area, Russian troops are predominantly on the defensive. The Ukrainian military manages to repel their local attacks. Rocket strikes and shelling in the Kharkiv region persist. On the night of July 5-6, Russian rockets fired at Kharkiv hit the building of the H. Skovoroda National Pedagogical University; residential buildings were also destroyed. In recent days, at least 4 civilians (including 1 child) have been wounded in the region.

The Ukrainian Armed Forces are responding with pinpoint strikes on enemy depots. One of them resulted in a fire at a Russian troop logistics base in the Kharkiv region.

The situation in Zaporizhzhia region remains unchanged. Shelling along the front line continues, but there are no active combat operations. Russian troops concentrated on defending the occupied lines.

Russian troops reinforce their positions near the administrative border of Kherson region with Mykolaiv and Dnipropetrovsk regions. Shelling continues in the Kryvyi Rih and Mykolaiv directions; Ukrainian and Russian forces are actively using aviation in this area. Mykolaiv remains the target of rocket attacks, destroying civilian infrastructure and housing. At least 2 civilians were killed in Mykolaiv region during July 5-6. Also as a result of the shelling, 1 person was killed and 4 were injured in the temporarily occupied city of Skadovsk (Kherson region).

Russian troops periodically launch rocket attacks on the territory of Ukraine. On July 5, three Russian rockets struck the territory of Khmelnytskyi region, injuring 1 person. The port infrastructure of Odesa region was also targeted, but the missiles were intercepted by Ukrainian air defense.

The shelling of the border areas of the Chernihiv and Sumy regions with the use of MLRS and helicopters is ongoing. In recent days, at least 7 people have been wounded in the Sumy region.

Ukraine systematically exposes the messages of the Russian propaganda campaign aimed at undermining the fighting spirit and demonstrating the military might of the Russian troops. For example, Russia spread information about the destruction of HIMARS MLRS on Ukrainian territory – yet the Ukrainian military refuted this fake.

According to the Office of the UN High Commissioner for Human Rights, as of July 4, the number of civilian casualties in Ukraine since the start of the large-scale Russian invasion is 11,152 (4,889 killed and 6,263 wounded). As of the morning of July 6, more than 991 children had suffered as a result of the armed aggression of the Russian Federation in Ukraine (346 children killed, 645 wounded).

Michelle Bachelet, UN High Commissioner for Human Rights, stated at the regular meeting of the UN Human Rights Council that casualties from the conflict in Ukraine continue to mount. The large number of civilian casualties and the scale of the destruction of civilian infrastructure indicate that the attacks by the Russian armed forces do not comply with international humanitarian law. There is a growing body of evidence that suggests that the Russian military is responsible for murders and executions without trial.

According to Ukrainian Prosecutor General Iryna Venediktova, as of early July, 21,000 probable war crimes committed by the Russian Armed Forces are under investigation in Ukraine. The Office of the Prosecutor General receives about 200-300 reports of such crimes per day. At the same time, there remains a lack of access to the temporarily occupied territories of Ukraine, where it is impossible to verify the scale of war crimes and conduct full-scale investigations.

Matilda Bogner, head of the UN Human Rights Monitoring Mission in Ukraine, reported on the illegal filtering of people wishing to leave the temporarily occupied, battle-devastated port city of Mariupol. Some people are detained and held in Donetsk. UN representatives have documented that detainees in areas controlled by Russian armed forces have been subjected to torture and ill-treatment.

Viktor Liashko, Minister of Healthcare of Ukraine, updated information about the damage caused by the war to the Ukrainian healthcare system. Since the start of the full-scale invasion, 817 medical facilities have been damaged, 122 of which cannot be rebuilt. During active hostilities, 14 medics from civilian hospitals were killed and another 48 workers were wounded. In addition, 85 ambulances were destroyed; 105 vehicles were taken by the Russian military to an unknown destination. The buildings of 481 pharmacies were damaged by shelling, and 43 pharmacies were destroyed to the ground. There are 469 health care facilities in the temporarily occupied territory.

Several explosions were recorded in the temporarily occupied territories – near the Berdiansk seaport and in Kherson. Also, the second bridge near Melitopol was blown up during the week.

The Ministry of Finance of Ukraine indicated that in June the budget received UAH 97.3 billion (in May the figure was more than UAH 100 billion). Monthly deficit amounts to UAH 141.2 billion, or $4.8 billion.

Ukraine continues to seize property belonging to companies from Russia and Belarus. In particular 315 railway containers of mineral fertilizers worth more than UAH 360 million have been seized.

Ukraine, together with its foreign partners, continues to look for ways to unblock the ports to overcome the food crisis. In particular, according to President Volodymyr Zelenskyi, Ukraine is negotiating with Turkey and the UN to unblock the process of exporting Ukrainian grain through the Black Sea.

Australia has abolished duties on grain imports from Ukraine for one year. Thus, the Australian government introduces measures to support Ukraine, similar to the actions of the EU and the UK.

On July 4-5, a conference on Ukraine’s recovery from military aggression by the Russian Federation was held in Lugano, Switzerland. Representatives from more than 40 countries and about 20 international organizations adopted the Lugano Declaration following the event and pledged to support Ukraine. The signatories recognized the draft Recovery and Development Plan elaborated by Ukraine as an overall framework document guiding the recovery process, ensuring coordinated participation and partnership of many stakeholders. At the conference, Ukrainian Prime Minister Denys Shmyhal pointed out that Ukraine’s 10-year recovery plan is estimated at $750 billion, and noted that confiscated assets of Russia and Russian oligarchs, which by different estimates are worth $300 billion to $500 billion, must be the main source of reconstruction financing. During the conference, an agreement was reached to raise $1.9 billion in support for Ukraine.

Within the framework of the visit to Lugano a number of important bilateral and multilateral meetings took place. Ukrainian Prime Minister held a meeting with the President of the European Bank for Reconstruction and Development Odile Renaud-Basso, at which the parties discussed the implementation of current projects and prospects of new ones. In addition, in Lugano Denys Shmyhal handed over to the Secretary General of the Organisation for Economic Co-operation and Development Mathias Cormann Ukraine’s application for accession to this structure.

In order to express support and solidarity with the Ukrainian people representatives of the power circles of foreign countries pay visits to the Ukrainian capital. For example, on July 4, Ukrainian President Volodymyr Zelenskyi met with Magdalena Andersson, Prime Minister of the Kingdom of Sweden. In a joint statement, the politicians strongly condemned the Russian invading war and confirmed their readiness to conduct criminal investigations to bring to justice all those responsible for war crimes on Ukrainian territory. The parties also agreed that Sweden would support Ukraine’s further implementation of the association agreement with the EU, including a deep and comprehensive free trade area. On 6 July, Ukrainian President Volodymyr Zelenskyi held a meeting with Irish Prime Minister Micheál Martin. The sides discussed food security, energy and preparation of a new seventh sanctions package against Russia.

The President of Ukraine had a telephone conversation with British Prime Minister Boris Johnson, during which he thanked for another £100 million of aid. The sides discussed food security for the world and security guarantees for Ukraine. In addition, the United Kingdom expressed its readiness to provide Ukraine with ten self-propelled artillery units and barraging ammunition (kamikaze drones).

The Japanese government has formally decided to provide about $200 million in aid to combat the global food crisis caused by the Russian invasion of Ukraine. Part of the funds will go toward building warehouses for wheat and other grains in Ukraine to resume grain exports. The Kingdom of the Netherlands has allocated a €200 million loan for Ukraine, which will be spent through the IMF for the country’s public sector.

On July 4, the United Kingdom imposed new sanctions against Belarus due to its role in Russia’s invasion of Ukraine. The restrictions mainly affect exports of petroleum products, components of cutting-edge technology, and luxury goods. In addition, London is restricting imports of iron and steel from Belarus to the UK, and intends to restrict the Belarusian regime’s access to the British financial sector. Namely, it will prohibit a number of Belarusian companies to trade in securities on the London Stock Exchange.

Japan imposed additional sanctions against Russia and Belarus. They apply to about 90 individuals and legal entities, as well as a ban on the import of gold from Russia.

On July 5, the General Staff of the Armed Forces of Ukraine announced that conscripts planning to leave their regions during wartime must obtain permits from territorial recruitment centers. This decision led to a mixed reaction in the Ukrainian information space. On July 6, Zelenskyi instructed  Valerii Zaluzhnyi, the Commander-in-Chief of the Armed Forces of Ukraine, to cancel the procedure for military conscripts to obtain permits to travel between Ukrainian regions.

On July 5, following a meeting of representatives of the clergy of the Orthodox Church of Ukraine and the Ukrainian Orthodox Church (Moscow Patriarchate), a declaration of mutual understanding was signed, calling for unity before the external and internal challenges of the present, while condemning the war unleashed by Russia. Such processes demonstrate Russia’s gradual loss of influence on Ukrainian church affairs and outline the prospects for the unification of Ukrainian Orthodoxy.