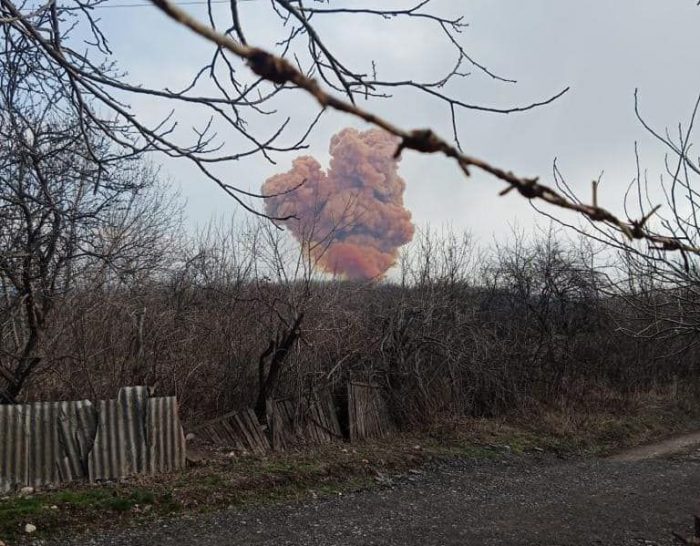 Russian forces are conducting operations aimed at establishing full control over the territories of Donetsk and Luhansk regions. In the south, they are trying to improve the tactical position of their units.

In the Kharkiv region, Russian troops continue to form a strike group near Izium. According to the estimates of the General Staff of the Armed Forces of Ukraine, they are preparing for an offensive in the direction of the settlements of Barvinkove (Kharkiv region) and Sloviansk (Donetsk region).

Russian troops keep shelling the Kharkiv region in a chaotic manner. According to Oleh Syniehubov, the head of the Kharkiv Regional Military Administration, as of the morning of April 5, Kharkiv (Saltivka, Piatykhatky, Oleksiivka, Kholodna Hora districts) and other populated areas in the region (Derhachi, Barvinkove, Chuhuiv) had been shelled. As a result of the shelling, 6 people were killed and 8 were injured.

Russian troops are trying to advance in the Luhansk region. In particular, the head of the Luhansk Regional Military Administration Serhii Haidai and the General Staff of the Armed Forces of Ukraine report on attempts to storm the positions of the Armed Forces near Novotoshkivske, Nyzhnie, Popasna and Rubizhne over the past two days.

The shelling of the populated areas of Luhansk region also continues. According to Serhii Haidai, on April 4, the police documented 51 shellings of Sievierodonetsk, Lysychansk, Rubizhne, Kreminna, Popasna, Hirske, Zolote, and Novodruzhesk. As a result of the shelling on April 5 in Rubizhne, 1 person was killed and 5 were injured. Also in Rubizhne, Russian troops hit a tank with nitric acid, which poses a risk of poisoning to local residents.

Supported by aircraft and artillery, Russian troops continue their assault on the city of Mariupol. According to the State Border Guard Service of Ukraine, during another shelling of Mariupol from the sea, the Russian military hit a civilian ship flying the flag of the Dominican Republic that was in port. According to preliminary information, one crew member was wounded.

Pavlo Kyrylenko, head of the Donetsk Regional Military Administration, reports that one person was killed in Bakhmut during the day as a result of shelling. Another 8 civilians were wounded in Donetsk region (4 in Marinka, 1 each in New York, Bakhmut, Vuhledar and Avdiivka).

According to the head of the Dnipropetrovsk Regional Military Administration Valentyn Reznichenko, the oil depot was destroyed at night as a result of a missile strike and one of the plants in the region was damaged. Information about the victims is being clarified.

The General Staff of the Armed Forces of Ukraine reports that in the Kherson region, the Ukrainian military liberated the settlements of Dobrianka, Novovoznesenske and Trudoliubivka, located near the border with Dnipropetrovsk region, as a result of a counteroffensive.

On the night of April 4-5, a missile attack was launched against Ternopil region. As a result of the missile being shot down by air defense forces, debris damaged a mineral fertilizer warehouse.

On the evening of April 5, the head of the Lviv Regional Military Administration, Maksym Kozytskyi, reported explosions in the vicinity of Radekhiv, which could be the result of a rocket attack.

The General Staff of the Armed Forces of Ukraine informs about a large-scale provocation and falsification of data in Mariupol that is being prepared. In particular, Russian troops plan to collect in one place the bodies of dead civilians and present them as victims of the Ukrainian Armed Forces’ actions.

The Ukrainian Institute called on the international community to stop cooperating with Russia and to spread and popularize Russian art used for political propaganda.

According to Iryna Vereshchuk, the Minister for Reintegration of the Temporarily Occupied Territories, 3,846 people were evacuated through humanitarian corridors on April 5. At the same time, a convoy of 7 buses to evacuate people from Mariupol, which was accompanied by the International Committee of the Red Cross, was forced to return after being blocked in the town of Manhush.

The Office of the UN High Commissioner for Human Rights reported that from the beginning of the large-scale invasion by the Russian Federation until April 5, 2022, there were 3,675 civilian casualties (1,480 killed and 2,195 wounded) in Ukraine.

According to juvenile prosecutors, at least 431 children in Ukraine suffered as a result of the Russian Federation’s armed aggression. As of the morning of April 5, 2022, 165 children had been killed and 266 injured with varying degrees of seriousness.

The Office of the Prosecutor General released data on civilian casualties resulting from the April 4 shelling of Mykolaiv. As a result of the actions of the Russian military, 12 people were killed; 41 were wounded (including 4 children).

Prosecutor General Iryna Venediktova stated that almost five thousand Russian war crimes are being investigated in Ukraine, including cases of sexual violence against Ukrainian women and men, children and the elderly.

Verkhovna Rada Commissioner for Human Rights Liudmyla Denisova said that the Russian military violated Article 13 of the Geneva Convention on the treatment of prisoners of war. The captured Ukrainian servicemen were tortured and regularly interrogated in order to break their morals. Denisova urged the UN Commission on Human Rights to take these violations into account.

The General Staff of the Armed Forces of Ukraine informs that Russian troops are searching and illegally detaining residents with a pro-Ukrainian stance in the settlements of Velykyi Burluk, Prykolotne and Fedorivka in Kharkiv Region.

The Association of Ukrainian Cities reports that Mykhailo Burak, head of the Bekhter community in the Kherson region, was released from captivity. According to the association, Burak is currently in hospital with multiple injuries.

According to Minister of Infrastructure Oleksandr Kubrakov, according to preliminary calculations during the war, the loss of income at Boryspil airport amounted to 3.5 billion UAH; losses of Ukrposhta was more than 500 million UAH.

Bloomberg journalists claimed that the Russian war against Ukraine resulted in a drop of Ukrainian exports in the grain market. Even restructuring supplies from other countries will not be able to compensate for the loss of supplies from Ukraine.

Ukrainian President Volodymyr Zelenskyi spoke at a UN Security Council meeting convened to discuss the Russian invasion of Ukraine and, in particular, war crimes in the Kyiv region. During his speech, Zelenskyi pointed out that Russia’s actions undermine the global security architecture and called for immediate reform of the UN and depriving Russia of its veto power in the organization’s Security Council.

Western states continue to limit diplomatic contacts with the Russian Federation, especially after the publication of information about civilian casualties in Bucha in the Kyiv region. The European Union declared a number of Russian diplomats working at the Russian Permanent Mission to the EU persona non grata. This decision was explained by their activities which contradicted their diplomatic status.

The EU introduces a fifth package of sanctions against Russia in response to the crimes of Russian troops in Bucha and the continuation of the war against Ukraine. These are, in particular, an embargo on coal imports from Russia; a complete ban on transactions for four key Russian banks (VTB among them) representing 23% of the Russian market; and a ban on Russian ships entering EU ports. Russian and Belarusian transport operators and financial support from Russian government agencies are also banned; additional export and import restrictions are imposed. Russian companies are prohibited from participating in public procurement in the EU. New personal sanctions are imposed against individuals.

The United States plans to provide Ukraine with an additional $100 million in military aid (these are Javelin anti-tank systems).