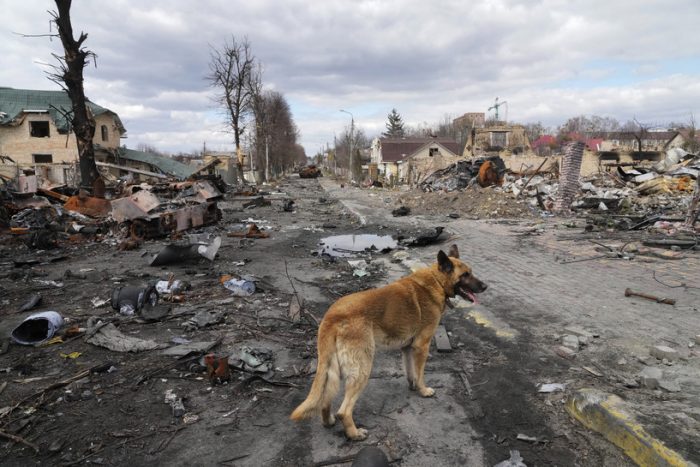 Russian troops are increasing their offensive potential in the eastern direction, which is turning into the key theater of military operations. In the south of Ukraine, Russian units are regrouping their forces and trying to improve the tactical situation in certain sections of the front. In the north, the retreat of Russian forces from Chernihiv and Sumy Regions was completed.

The head of the Zhytomyr Regional Military Administration, Vitalii Bunechko, reported that the region’s territory has been completely liberated from Russian troops.

The Russian military has withdrawn from Chernihiv, and a relatively safe route for humanitarian aid and evacuations to the city has been organized.

The Armed Forces of Ukraine resumed control of the entire Sumy region.

In Kharkiv region, Russian troops are preparing to continue offensive operations near the town of Izium in the direction of Sloviansk and Barvinkove. The General Staff of the Armed Forces of Ukraine reports Russian reconnaissance UAV flights in the direction of Barvinkove and the seizure of the village of Brazhkivka.

Russian troops continue to blockade and shell Kharkiv. On the night of April 3-4, residential areas of the city (Piatykhatky, Oleksiivka, Saltivka) were shelled. The city of Derhachi was also shelled, killing three people and injuring seven more.

On the territory of Luhansk region, Russian troops continue to attack Rubizhne and Popasna, and are preparing to attack Sievierodonetsk.

Two priests were wounded in Rubizhne. The Joint Forces Operation staff informed about three wounded in the village of Heorhiivka.

Fighting for Mariupol continues in the Donetsk region. Also Russian troops conducted assault actions in the direction of Troitske, Novobakhmutivka and Novoselivka communities.

According to the Donetsk Regional Military Administration, two people were killed as a result of the shelling in Avdiivka; nine people were wounded (four in Avdiivka, three in Heorhiivka, one in Novoselivka and one in Vozdvyzhenka). In turn, the Joint Forces Operation staff reports one wounded in Novosilka.

According to Ivan Arefiev, the representative of the Zaporizhzhia Regional Military Administration, artillery shelling of the village of Komyshuvakha was carried out at night and in the morning on April 4.

During the day, Russian troops struck the city of Mykolaiv. The mayor of the city, Oleksandr Sienkevych, reported the use of cluster munitions. As a result of the shelling, 10 people were killed and another 61 were wounded.

Russian officials and the media are launching a new disinformation campaign. They try to deny information about war crimes in the temporarily occupied territories, accusing Ukraine and the West of staging them. Satellite images released by The New York Times have confirmed Russian war crimes.

The Center for Counteracting Disinformation at the National Security and Defense Council reported on the reliability of messages sent to citizens’ phones by the “Ukraine” subscriber. The Center stressed that the account belongs to the State Service of Special Communication and Information Protection of Ukraine and does not pose a threat to Ukrainians. The link indicated in the message can be used to go to a site where citizens can leave their personal statements regarding the Russian-Ukrainian conflict.

According to Iryna Vereshchuk, the Minister for Reintegration of the Temporarily Occupied Territories, 3,376 people were evacuated during April 4 through humanitarian corridors. However, the concluded agreements were violated from the Russian side – a convoy of 7 buses to evacuate people from Mariupol, which followed the agreed route, accompanied by a delegation of the International Committee of the Red Cross, was blocked in the town of Manhush.

Volodymyr Zelenskyi stated that it is still impossible to agree with the Russian side to evacuate people from Mariupol and bring food, water and medicine to the city through humanitarian corridors. As a result, about 150 thousand people remain blockaded in Mariupol.

The Office of the UN High Commissioner for Human Rights reported that since the beginning of the large-scale invasion by the Russian Federation, as of 00:00 on April 4, 2022, 3,527 civilian casualties (1,430 killed and 2,097 wounded) have been recorded in Ukraine.

According to the Office of the Prosecutor General, as of April 4, 425 children (161 children killed and 264 wounded) suffered as a result of the armed aggression of the Russian Federation in Ukraine.

Prosecutor General Iryna Venediktova reported that joint investigative teams consisting of representatives of the National Police and the Security Service of the State Bureau of Investigation have been recording crimes by Russian troops near the war zone. In Kyiv region, Borodianka village is where the worst situation in terms of civilian casualties takes place. The Office of the Prosecutor General reported that prosecutors, together with police officers from the Kyiv region, had discovered a torture chamber in the town of Bucha. In the basement of one of the children’s sanatoriums law enforcers found the bodies of five men with their hands tied.

In the village of Zalizny Port in the Skadovsk district of Kherson, Russians kidnapped the head of the Bekhter community Mykhailo Burak. According to Kherson city authorities, the Russian military continues to illegally kidnap Ukrainian citizens. Russian soldiers try to disperse all rallies in support of Ukraine. The city is running out of food, medicine, and fuel.

The Ukrainian Ministry of Culture and Information Policy reported that 18 media representatives (15 men and 3 women) were killed in 40 days of war on Ukrainian territory. Russian troops also kidnapped 8 journalists; another 3 were reported missing.

Yurii Shchyhol, the head of the State Service of Special Communication and Information Protection of Ukraine, indicated that according to preliminary data, the Russian Federation inflicted more than 600 billion UAH worth of damage to Ukraine’s telecommunications infrastructure during the month of war.

Residents of Rubizhne, who were forcibly deported to temporarily occupied Luhansk, staged a rally, demanding they be allowed to return to Ukrainian-controlled territory.

According to the Prime Minister of Ukraine Denys Shmyhal, Ukraine’s daily losses due to the war, including infrastructure losses, amount to about $4.2 billion a day. In addition, he revealed that the sources of funding for the reconstruction of Ukraine after the war will be frozen and seized funds and property of Russia, as well as funds from Western partners.

Deputy Chairman of the National Bank of Ukraine Yaroslav Matuzka stated that deposits of legal entities and individuals have increased by 28.1 billion UAH since the war started on March 31.

Volodymyr Zelenskyi approved the composition of the Ukrainian delegation, headed by Davyd Arakhamia, to participate in negotiations with Russia on the preparation and negotiation of a draft treaty on security guarantees for Ukraine.

Ukrainian President Volodymyr Zelenskyi made a speech in the Romanian parliament. He once again noted Russia’s war crimes in Bucha and called on Romania to end economic cooperation with Russia and support new EU sanctions. Zelenskyi said he believes Romania’s leadership will be one of the decisive factors in restoring justice and protecting normal life in the region and Europe in general.

Zelenskyi also had a conversation with Austrian Federal Chancellor Karl Nehammer, informing him about the crimes of Russian troops in the Kyiv region of Ukraine.

Josep Borrel, High Representative of the European Union for Foreign Affairs and Security Policy, declared that civilian casualties and the destruction of civilian infrastructure show the true face of the brutal war of invasion that Russia is waging against Ukraine and its people. He believes that the Russian authorities must be held accountable for the massacres in the city of Bucha and other cities in Ukraine that were under the control of Russian troops.

European countries are reducing the number of Russian diplomats on their territory. France is expelling 30 Russian diplomats whose activities are contrary to the country’s security interests. The federal government of Germany declared 40 members of the diplomatic staff of the Russian embassy personae non grata. In addition, the Lithuanian Foreign Ministry announced its decision to reduce the level of diplomatic relations with Russia. The Lithuanian Republic recalls its ambassador from Moscow, expels the Russian ambassador and closes the Russian diplomatic mission in Klaipeda. Latvia plans similar measures to lower the level of relations.

Poland, Latvia, Lithuania and Estonia may soon introduce a transport blockade of Russia and Belarus by closing their borders to Russian vehicles.