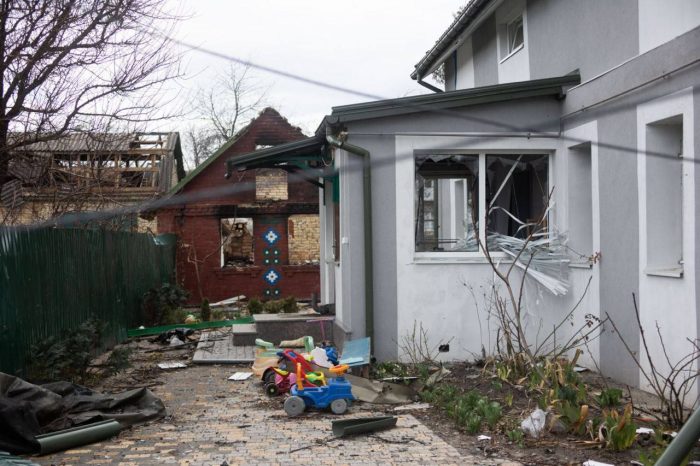 As of 8:00 a.m. on April 5, 2022, during the last 24 hours, 51 civilians had been killed due to the Russian invasion, including 1 child (excluding all casualties in Mariupol, Volnovakha, Kyiv, Luhansk, Kyiv, Zaporizhzhia, Kherson, Sumy, Kharkiv and Chernihiv regions). 84 people were injured, including 2 children. 2 civilians were captured, and totally more than 100 civilians were kidnapped by the Russian troops, they are mostly journalists, local government officials of the occupied settlements, the Ukrainian activists and teachers as well.

As of April 4, due to the Russian full-scale invasion against the population of Ukraine, 161 children were killed and 264 were wounded, according to the data of the Office of the Prosecutor General of Ukraine.

2. In Melitopol (Zaporizhzhia region) – the Russian invaders kidnapped Inna Morozovska – the mother of Dmytro Lahzdukalnas, the member of the Melitopol town’s council.

Illegal deportation of the Ukrainian citizens is lasting. These are evidences of the violated taken out of Izum’s residents (Kharkiv region).

Kyiv region: according to the uncompleted data approximately 15 civilians were found, who were tortured and killed in Bucha.

Bucha (Kyiv region) – it has become known about shooting dead of the family – 5 or 6 persons by the Russian invaders. The exact number of people is difficult to establish yet, among them were children. Two tortured and killed men were found in the basement of the house. It also became known about 8 brutally murdered men who were trying to defend their own town.

Mariupol – 3 people were injured, including 1 child.

Avdiivka – 2 people were killed, 4 civilians were injured, including 1 child.

Rubizhne (Luhansk region) – the Russian occupiers fired on the church, 2 priests were wounded.

Mykolaiv region: 17 civilians were killed, including 1 child. 66 people were injured.

Ochakiv – 7 civilians were killed and 20 wounded in the shelling by the Russian military on April 3. Information on the number of victims due to the shelling on April 4 is being clarified.

Semyanivka (Konotop district, Sumy region) – after the liberation of the occupied territories, new civilian casualties are becoming known every day. The Russian military brutally tortured and killed a civilian.

Kharkiv region: 9 civilians were killed and 1 was injured.

Kharkiv – due to the shelling by the Russian troops at residential areas of the city 3 people were killed and 1 was wounded.

Chuhuiv (Kharkiv region) – 2 civilians died in the shelling of the residential buildings.

Viktorivka (Chernihiv region) – a local resident died during the Russian occupation of the village. The Russian military were keeping all residents in one basement without food and medicine.

Vesele (Nizhyn district, Chernihiv region) – the corpse of a civilian killed by the Russian military was found.

Bykove (Chernihiv region) – the Russian occupiers were holding 5 men captive for 33 days. The prisoners were being kept without food and water in an iron container.