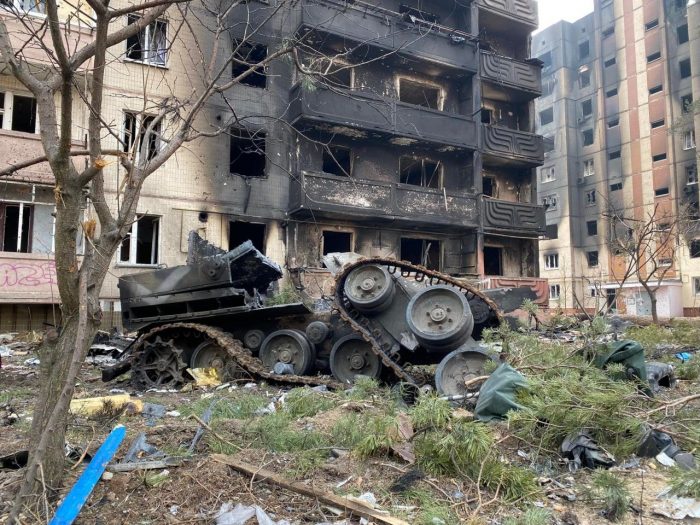 Russian forces are concentrating efforts to attempt to cordon off Ukrainian units in the area of the Joint Forces Operation and reach the administrative borders of Luhansk and Donetsk regions. The main battles are taking place in Mariupol, near Izium and on the outskirts of Sievierodonetsk. Russian forces are launching missile strikes against critical infrastructure in the Ukrainian rear.

Deputy Defense Minister Hanna Maliar reported that the Kyiv region has already been liberated from Russian troops. In the territories retaken by the Armed Forces of Ukraine, the mine threat remains acute. According to Oleksiy Kuleba, head of the humanitarian staff of the Kyiv region, it will take at least 10 days to eliminate it.

Some Russian troops continue to blockade Chernihiv, but according to the General Staff of the Armed Forces of Ukraine, the main group is concentrated to withdraw to the Russian Federation. The Ukrainian Armed Forces resume control of temporarily seized territories. Operational Command “North” reports the liberation of the urban-type settlement of Mykhailo-Kotsiubynske near Chernihiv.

The head of the Sumy Regional Military Administration, Dmytro Zhyvytskyi, indicated that a large number of Russian troops from Russian territory had entered the region.

The General Staff of the Armed Forces of Ukraine reports that the towns of Buryn and Putyvl in the Sumy region are blocked by Russian troops. They are surrounded by checkpoints, and a large accumulation of Russian military equipment has been recorded.

Russian troops continue to blockade Kharkiv and attempt to advance near Izium.

Oleh Syniehubov, the chairman of the Kharkiv Regional Military Administration, reported that Grad MLRS rockets were fired at the Horkyi Park in Kharkiv, injuring one person. Derhachi was also shelled. As a result of the Russian shelling, the Balakliia district hospital was partially damaged. Information about casualties is being clarified.

Sievierodonetsk, Rubizhne, Lysychansk, and Toshkivka towns are shelled daily from various types of heavy weapons. According to Serhii Haidai, head of the Luhansk Regional Military Administration, 19 objects were damaged by the shelling, including nine apartment buildings and seven private houses; one person was wounded. After the shelling, a gas pipeline near Sievierodonetsk was damaged, and 100,000 consumers remained without gas supply during the day.

Pavlo Kyrylenko, head of the Donetsk Regional Military Administration, reported that one person was killed (in Bakhmut); five people were wounded (in Bakhmut, Odradne and Marinka) as a result of the shelling.

The head of Poltava Regional Military Administration Dmytro Lunin declared missile strikes on the infrastructure of Myrhorod. As a result of the shelling, the runway and infrastructure of the local airfield were damaged; a fire broke out in a fuel and lubricants warehouse. He also reported that as a result of the Russian attack on Kremenchuk on the morning of April 2, the refinery and fuel and lubricants depots were destroyed.

Russian forces carried out airstrikes on Odesa, some of the missiles were shot down by air defense.

The head of the Khmelnytskyi Regional Military Administration, Serhii Hamalii, reports that Russian troops launched a missile strike on an industrial facility near Shepetivka in the Khmelnytskyi region.

Russian troops jam communications in the temporarily seized Enerhodar. Ukrainska Pravda reports that wired Internet and telephone service has disappeared in the city.

On April 2, according to the Minister for the Reintegration of the Temporarily Occupied Territories, Iryna Vereshchuk, 4,217 citizens were evacuated. 1263 people from Mariupol and Berdiansk reached Zaporizhzhia by their own transport (765 people from Mariupol, 498 residents of towns in Zaporizhzhia region: Berdiansk, Melitopol, Polohy, Orikhiv and Vasylivka). The evacuation of Mariupol residents by bus continues. In the Luhansk region, it has been possible to evacuate almost 2,700 citizens from the towns of Sievierodonetsk, Rubizhne, Lysychansk, Kreminna, Popasna and the village of Nyzhnie.

As of April 2, the Office of the United Nations High Commissioner for Human Rights recorded 3,342 victims among the civilian population of Ukraine: 1,325 dead and 2017 wounded. The Prosecutor General’s Office reported that at least 158 ​​children had been killed and more than 254 injured in Ukraine since February 24.

The Prosecutor General’s Office has released statistics on crimes committed by the Russian military during Russia’s full-scale invasion of Ukraine. As of April 2, 3,927 crimes of aggression and war crimes were registered. 3803 of them are violations of the laws and customs of war; 42 – planning, preparing or resolving and waging an aggressive war; 8 – propaganda of war; 74 – others. 2128 crimes against national security were also registered. 1429 of them are encroachments on the territorial integrity and inviolability of Ukraine; 390 – treason; 56 – sabotage; 253 – others.

The mayor of Bucha, who was released in the Kyiv region the day before, reported a large number of civilian casualties in the city as a result of the Russian occupation. Dozens of murdered people in civilian clothes are lying on the streets of Bucha, some of them with their hands tied. Nearly 300 people are buried in a mass grave. The naked bodies of 4-5 women trying to burn were found on a highway near Kyiv. After its release, the bodies of local mayor Olha Sukhenko and her husband, who were abducted by the Russian military on March 23, were found in the village of Motyzhyn.

Lithuanian director Mantas Kvedaravicius is reported to have died in Mariupol. The body of the famous Ukrainian photojournalist Maks Levin, who disappeared on March 13 in the war zone, was found in Kyiv region.

Rescuers continue to dismantle blockages at the place of hit of the rocket in the building of the Mykolaiv regional administration (March 29). According to updated data, 36 people died as a result of the attack. One of the victims was the head of the Belarusian community in the region, Tatiana Demennikova.

The abductions of city government representatives in temporarily uncontrolled territories continue. Russian troops captured Oleksii Shybaiev, deputy head of the Novoslobidska United Territorial Community of the Sumy region, while he was escorting humanitarian aid. As of the evening of April 1, there is no information about the whereabouts of the mayor of Tavriisk (Kherson region) Mykola Rizak. In Melitopol, the head of the Melitopol District Council, Serhii Pryima, and 5 school principals have been held captive for more than two weeks.

The Minister of Development of Communities and Territories Oleksii Chernyshov said that according to preliminary data, 6,800 residential buildings in Ukraine were destroyed as a result of hostilities. Mariupol, Kharkiv and Chernihiv suffered special damage.

Residents of the temporarily occupied city of Enerhodar, Zaporizhzhia region, gathered for a pro-Ukrainian rally on April 2. The Russian military used weapons against the protesters. Among the locals are wounded and detained.

The Office of the President of Ukraine stated that according to the Ministry of Finance, Ukraine spends approximately $10 billion per month of war.

According to the First Deputy Minister of Economy of Ukraine Denys Kudin, the forecast of the Ministry of Economy for the decrease in GDP in the first quarter of 2022 is 16%, and the annual decline in GDP could reach 40%.

The State Property Fund reported that the Verkhovna Rada adopted the bill №7192, which establishes a special regime for the lease of state property during martial law. It empowers the Government to introduce benefits for tenants.

According to the Chairman of the Verkhovna Rada Committee on Finance, Tax and Customs Policy Danylo Hetmantsev, 150 enterprises from different regions of Ukraine were relocated to the western regions as part of an evacuation program from the war zone; 57 of them have already started working.

Two major Ukrainian marketplaces (ALLO and Rozetka) have reported a significant reduction in staff, as well as significant problems with asset losses and significant cuts in monthly turnover.

The President of Ukraine Volodymyr Zelenskyi discussed with the Prime Minister of the United Kingdom Boris Johnson the defense support of Ukraine, the strengthening of anti-Russian sanctions and post-war security guarantees. In addition, Volodymyr Zelenskyi held talks with the Presidents of Colombia and Latvia on humanitarian support for Ukraine, as well as the situation surrounding the Russian invasion and its war crimes.

The Minister for Foreign Affairs of Ukraine Dmytro Kuleba and the Foreign Minister of Germany Annalena Baerbock had a telephone conversation, discussing the current situation at the front. The Ukrainian Foreign Minister stressed the need to impose new tough sanctions against Russia and strengthen Ukraine’s defense support. At the same time, Minister of Community and Territorial Development Oleksii Chernyshov, according to the results of a meeting with Federal Minister for Economic Cooperation and Development Svenja Schulze, said that Germany would provide 49 million euros for the construction of housing for internally displaced persons in Ukraine.

From the beginning of April, Lithuania completely stopped importing gas from the Russian Federation, becoming the first country in the European Union to take such a step. Lithuanian Minister of Energy Dainius Kreivys stated that this is a turning point in the history of Lithuania’s energy independence.