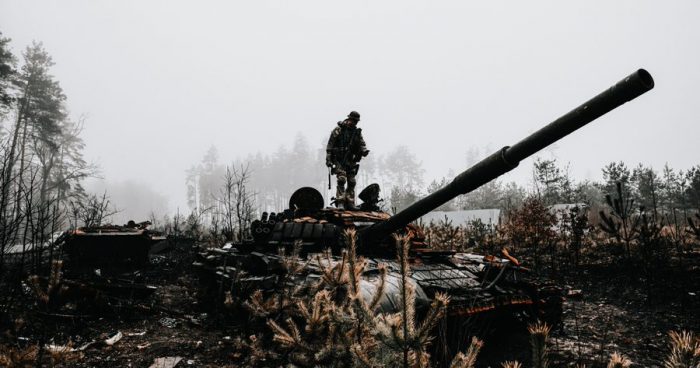 Russian troops are retreating in the Kyiv and Chernihiv directions. The front line has moved significantly away from the Ukrainian capital. Active fighting is taking place in Donetsk and Luhansk regions, where Russian forces continue to attack the blockaded cities of Mariupol, Rubizhne, and Popasna. Russian aviation also concentrated its activity in the east, trying to evade Ukrainian air defense.

Russian forces continue to retreat from the outskirts of Kyiv. They concentrate their efforts on defending certain lines to cover the withdrawal of troops. The General Staff of the Armed Forces of Ukraine reports active mining and destruction of infrastructure to delay the advance of Ukrainian troops.

On the northwestern direction, the Ukrainian army resumed control of several population centers, including Bucha, Demydiv and Dymer, and Borodianka. Oleh Berehovyi, a deputy of the Ivankiv town council, reported that Russian troops had left the town of Ivankiv. In the eastern direction, according to Brovary Mayor Ihor Sapozhko, Russian troops have left the territory of the Brovary district of the Kyiv region.

A gradual retreat of Russian troops is underway in the Chernihiv region. The information was confirmed by Viacheslav Chaus, head of the Chernihiv Regional Military Administration.

According to Oleh Syniehubov, head of the Kharkiv Regional Military Administration, Russian troops continue shelling the region with different types of weapons. The city of Kharkiv and its suburbs came under fire. At the same time, the activity of Russian aviation around Kharkiv has decreased.

Izium remains a hotspot in the Kharkiv region, and hostilities rage on around it. Russian troops hold part of the city and pontoon crossings over the Siverskyi Donets River near it. According to the General Staff, they are unable to advance further in the southern and eastern directions.

In the Luhansk region, Russian forces continue to attack the towns of Popasna and Rubizhne. Russian aviation strikes in the areas of Rubizhne, Bila Hora, and Sievierodonetsk. On the night of April 1-2, the towns of Sievierodonetsk, Rubizhne, Lysychansk, Kreminna, Hirske, and the villages of Berezove and Toshkivka suffered shelling. As a result, 31 buildings – residential houses and infrastructure facilities – were damaged.

Russian troops continue to storm Mariupol. The General Staff reports attacks in the direction of Velyka Novosilka and Rozdolne. Russian aircraft strike in the Marinka area.

The head of the Donetsk Regional Military Administration, Pavlo Kyrylenko, indicated that during the day Russian troops fired on Marinka, Vuhledar and Novoselivka. 7 people were killed and 6 were injured.

Dmytro Lunin, head of the Poltava Regional Military Administration, reported an overnight rocket attack on one of the infrastructure facilities in Poltava. Also according to him, many strikes on residential buildings and other infrastructure were recorded in the morning in the city of Kremenchuk.

On the night of April 1 to 2, Russian troops shelled the outskirts of Kryvyi Rih with multiple rocket launchers. According to the head of Kryvyi Rih Oleksandr Vilkul, the shelling resulted in a fire at a gas station.

On the evening of April 1, there were explosions as a result of rocket fire in Dnipro.

Maksym Marchenko, head of the Odesa Regional Military Administration, stated that Russian troops fired three Iskander missiles at a population center in the Odesa region, and there were casualties.

The mayor of Melitopol (Zaporizhzhia region) Ivan Fedorov said in a TV marathon that the Russians are trying to completely block the Ukrainian Internet in the city, drawing their line from Crimea. Thus, the Russian Federation creates an information vacuum for the residents of Melitopol.

The Office of the United Nations High Commissioner for Human Rights reports that as of April 1, 3,257 civilian casualties had been recorded since the beginning of the active phase of the conflict in Ukraine (1,276 dead and 1,981 wounded). Juvenile prosecutors say 153 children have been killed and more than 245 injured in hostilities in Ukraine.

As a result of an exchange of prisoners held in the Zaporizhzhia region, 86 Ukrainian servicemen (15 of them women) were released.

Health Minister Viktor Liashko announced that 274 hospitals had been shelled in Ukraine since the start of the war; 13 – not recoverable. 70 ambulances were disabled. As a result of hostilities, 6 medical workers were killed and 20 were seriously injured.

The Ministry of Environment instructed that the fighting covered a third of the area of the nature reserve fund of Ukraine. Reserves and national parks suffer significant losses. According to scientists, 2.9 million hectares are in danger of destruction, which need protection at the European level.

The Ministry of Culture has recorded 135 episodes of war crimes by Russian troops against cultural heritage in Ukraine. Religious buildings (59 objects) suffered the most.

According to Prime Minister Denys Shmyhal, the Cabinet of Ministers has increased the size of the reserve fund by UAH 73.3 billion to provide the key needs of the army and the economy.

The Chairman of the Committee on Finance, Tax and Customs Policy of the Verkhovna Rada Danylo Hetmantsev announced that the parliament has approved a law guaranteeing full reimbursement of bank deposits to individuals during the martial law.

In a video address, President of Ukraine Volodymyr Zelenskyi said that in two days more than 25,000 Ukrainians submitted an application in the “Diia” application for compensation for houses and apartments destroyed by Russian troops.

The Ministry of Finance reported that revenues to the state budget in March were at the level of 92.9% and amounted to 103.4 billion hryvnias.

Volodymyr Zelenskyi discussed with the President of France Emmanuel Macron the Ukrainian-Russian negotiation process, the importance of security guarantees for Ukraine, as well as the initiative to create a humanitarian corridor for the evacuation of Mariupol.

The European Union and China held a bilateral summit by video conference. The EU called on China to support efforts to end the bloodshed in Ukraine immediately, in line with China’s role in the world as a permanent member of the UN Security Council.

The Bulgarian Ministry of Foreign Affairs has declared the first secretary of the Russian embassy in Sofia persona non grata, whom the Bulgarian authorities suspect of espionage.

The German Ministry of Defense has decided to allow Ukraine to supply about 60 BMP-1s, which in the past were in the service of the GDR army, and are now in the Czech Republic.

The US Department of Defense has agreed to provide Ukraine with an additional $300 million military aid package. In particular, it is a question of transfer to the Armed Forces of unmanned aerial vehicles, machine guns, tactical protected communication systems, etc.