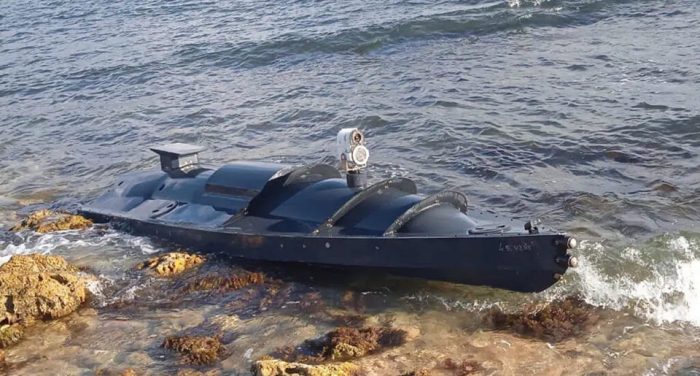 Russian troops are attempting to advance on a broad front in Donetsk region. In turn, the Ukrainian Armed Forces are steadily advancing in the north of Luhansk region. In the south, the parties are preparing for the battle for Kherson. The Russian command is deporting the local population from the city, evacuating military equipment from the bridgehead on the right bank of the Dnipro river and preparing defensive positions on the left bank of the river. The main efforts of the Ukrainian Armed Forces in this direction are aimed at disrupting the logistics of the southern group of Russian forces.

On October 29, the Russian Navy base in the temporarily occupied Sevastopol was attacked with the use of unmanned surface vehicles. Information about the results of the attack is being clarified, but it is reliably known that several warships were damaged. This is the first case of successful use of such weapons in combat. Russia used this attack as a pretext to suspend its participation in the implementation of the grain deal. U.N., Turkey, Ukraine press ahead with Black Sea grain deal despite Russian pullout.

Russian troops are trying to improve their position near Lysychansk. In their turn, Ukrainian Armed Forces keep making further advances at Svatove and Kreminna directions. According to the head of Luhansk Regional Military Administration Serhii Haidai, a barrack with Russian troops was destroyed near Svatove.

Russian military continue offensive operations in the area of Avdiivka. Russian offensive near Bakhmut slowed down after successful actions of the Ukrainian Armed Forces. Attacks on the rear infrastructure and logistics of the Russian Federation are ongoing. On October 27, another fire broke out at the oil storage facility in the temporarily occupied Shakhtarsk, where fuel reserves of Russian troops were stored.

Russian troops carry out intensive shelling, which leads to the destruction of civilian infrastructure and civilian casualties. During October 27–30, at least 16 civilians were killed and 27 people were injured in Donetsk region.

On October 29, Russian troops attacked critical infrastructure facilities in Zaporizhzhia. As a result of the shelling, an industrial building was destroyed. Also, at least 2 people were injured as a result of strikes on the territory of Zaporizhzhia region.

Russian military keep preparing for the battle for Kherson. They are also reinforcing their positions on the left bank of the Dnipro river. The withdrawal of Russian equipment from the territory of Kherson airport, which has remained an important base on the right bank for the last months, has been recorded. Representatives of the occupation administration are being evacuated from Kherson; objects of cultural value for the Russians (monuments to Russian military figures and the remains of Prince Potemkin, who was buried in the city) have been taken away.

Russian troops continue shelling Mykolaiv region. On the night of October 28, a missile strike on Mykolaiv destroyed an administrative building; 1 person was injured. The shelling of the territory of Mykolaiv region resumed the next night. As a result 4 people were wounded.

In the morning of October 29, an attack was carried out with the use of unmanned surface vehicles in Sevastopol Bay, which is the main base of the Russian Black Sea Fleet.  Independent sources, based on published materials, found that at least three ships of the Russian Black Sea Fleet (including its flagship Admiral Makarov) could have been hit by marine drones. The Russian side used the attack as a pretext to withdraw from the “grain deal”.

Russian troops shell the area of Nikopol in Dnipropetrovsk region with artillery. On the night of October 29, 1 civilian was injured here.

Also, the territory of Kharkiv region remains under attack, where at least 4 civilians were wounded in recent days.

Shelling of the border areas of Chernihiv and Sumy regions from the territory of the Russian Federation is ongoing. On 30 October 1 person was injured in Sumy region.

On October 29, another exchange of prisoners took place. As a result, 52 Ukrainian servicemen captured at Azovstal, Kharkiv, Donetsk, Kyiv, Zmiinyi Island and Chornobyl NPP were returned from captivity. In general, according to the President of Ukraine, 1031 people have been released from Russian captivity since March. According to the Security Service of Ukraine, 579 bodies of Ukrainians who were killed or died in connection with the armed aggression of the Russian Federation have been returned to Ukraine since the beginning of the full-scale invasion.

Minister of Internal Affairs Denys Monastyrskyi stated that law enforcement officers managed to establish who arranged a torture chamber for Ukrainians in Balakliia (Kharkiv region). According to available information, torture in the local police station was carried out by representatives of special police forces (OMON) from Tolyatti (Samara region) of the Russian Federation. Up to 40 people could be held in torture cells at the same time; they were subjected to electric shocks and beatings.

In total, during the investigation, 1077 bodies were found in the de-occupied territories of Donetsk, Kharkiv and Kherson regions, of which 446 remain unidentified. As a result of the survey, Ukrainian law enforcement officers are finding more and more new graves – recently a grave with 17 unidentified bodies was discovered in Kharkiv region.

The problem of mining of Ukrainian territories remains acute. Surveys of the newly de-occupied territories show that mines are twice as dense there compared to Kyiv or Chernihiv regions. In recent months, the State Emergency Service and police have found more than 380 thousand explosive objects.

Mariupol Mayor Vadym Boichenko indicated that the situation in the temporarily occupied city keeps deteriorating. The Russian military are taking out the surviving equipment and Ukrainian metal products, engaging residents in unpaid work. They also plan to mobilize 10 thousand men into the ranks of the Russian army.

The Ministry of Foreign Affairs of Ukraine initiates the opening of a criminal case against the Russian Presidential Commissioner for Children’s Rights Maria Lvova-Belova for the illegal adoption of a Ukrainian child abducted in Mariupol. She also facilitated the illegal adoption in Russia of about 350 children from the temporarily occupied regions in eastern Ukraine. This process is a gross violation of the Geneva Convention relative to the Protection of Civilian Persons in Time of War, which provides for the obligation of the occupying power not to change the civil status of children.

The United Nations systematically monitors the destruction of cultural sites in Ukraine as a result of the actions of the Russian Federation. The initial list revealed damage to 207 cultural sites since the beginning of the Russian invasion, including 88 religious sites, 15 museums, 76 buildings of historical and artistic interest, 18 monuments and 10 libraries. At the same time, the Ministry of Culture and Information Policy as of October 26 confirmed 552 episodes of Russian crimes against cultural heritage in Ukraine. Among the damaged or destroyed objects are 171 monuments, 146 objects of valuable historical buildings, 58 monuments and works of art, 44 museums.

The inflation report of the National Bank of Ukraine stated that unemployment will remain high for a long time due to the war and significant structural imbalances. Despite some recovery of economic activity, most enterprises are still operating well below pre-war levels. According to the State Employment Service, since the beginning of hostilities, 404 thousand citizens have received the official status of unemployed. At the same time, the number of vacancies in the labor market has substantially decreased. In addition, the National Bank reported that by 2022, real wages of Ukrainians will be reduced by a quarter.

Ukrainian electricity traders have been testing electricity imports from the EU in recent days. On October 27, the state energy trader JSC Energy Company of Ukraine reported a testing attempt. In addition, the network of European system operators ENTSO-E reported a number of test import attempts made by private Ukrainian energy companies. It is worth noting that the technical ability to import electricity from Europe to Ukraine is another tool to stabilize the Ukrainian energy system in case of a shortage of generating capacity.

The Verkhovna Rada reported that President Zelenskyi signed a law to increase military spending in the State Budget for 2022 by UAH 387 billion.

Russia is consistently taking measures aimed at undermining the grain corridor from Ukrainian ports and aggravating the problem of food security in the world. By delaying the inspection of ships in the Bosporus, the Russian side contributed to the creation of a queue, which delayed the process of transferring cargo to the recipient. On October 29, 2022, the Russian Federation, under the pretext of an attack on the Sevastopol Bay, announced the termination of participation in the “grain deal”, which provides for the unblocking of Ukrainian ports for the safe export of food. Minister for Foreign Affairs of Ukraine Dmytro Kuleba called on world leaders not to allow Russia to block the “grain corridor”, which guarantees food security for millions of people, under false pretenses. In general, according to the UN, as of October 28, 9.3 million tons of grain and other food products were exported during the agreement.

The international community actively reacted to the statement of the Russian Federation on the withdrawal from the “grain deal”. The U.S. President Joe Biden called this decision an “outrageous” act that will only aggravate hunger in the world. The European Union and NATO, as well as the Netherlands and Germany, called on Russia to cancel its decision to withdraw from the grain initiative and stop using food as a weapon in war. Currently, the Ministry of National Defense of Türkiye and UN Secretary-General Antonio Guterres are holding official talks with Russia to resume participation in the grain deal.

Ukraine, together with the UN and Türkiye, has agreed on a movement plan for Monday, October 31, for 16 vessels that are currently in Turkish waters. In addition, the parties agreed to conduct inspections for 40 vessels departing from the port on that day.

Given Russia’s daily attacks against Ukrainian civilian infrastructure, partner countries continue to provide military assistance to Ukraine. The United States announced a package of additional security and defense assistance to Ukraine totaling $275 million. The new package includes additional missiles for HIMARS systems, precision-guided munitions, remote-launched munitions, anti-tank systems, HMMWV armored vehicles, small arms, and satellite communications equipment. The total amount of military assistance to Ukraine from the United States since the beginning of the full-scale invasion has already exceeded $18 billion. Besides, Slovenia handed over to Ukraine 28 M-55S tanks, which were in the reserve of the Slovenian army. Lithuanian Defense Minister Arvydas Anušauskas announced that 12 more German howitzers PzH2000 will be repaired in Lithuania for Ukraine. Italy is preparing to transfer to Ukraine German Panzerhaubitze 2000 self-propelled howitzers and M270 MLRS, as well as American-made M109 self-propelled howitzers.

International partners are stepping up support for Ukraine to mitigate the effects of Russian attacks on its critical infrastructure and energy facilities. Canada  allocated about $53 million for the humanitarian needs of Ukraine, including a number of initiatives to provide temporary shelter, winterization and demining. Germany donated 40 tons of equipment and materials to Ukraine for the restoration of energy infrastructure, which facilitated the return of electricity supply to consumers.

The international community continues to impose sanctions and restrictive measures against Russia in the wake of the armed invasion of Ukraine. Canada expanded sanctions against 35 individuals and 6 energy sector entities involved in Russia’s violations of Ukraine’s sovereignty and territorial integrity. Since the beginning of the full-scale Russian invasion of Ukraine, Canada has imposed sanctions on more than 1,400 Russian individuals and entities. Norway joined the latest eighth package of sanctions imposed by the EU to reduce Russia’s ability to finance its war in Ukraine. The Estonian government approved a decree banning the purchase, import and transportation of Russian crude oil and petroleum products due to Russia’s aggression against Ukraine.

Since the beginning of Russia’s full-scale invasion of Ukraine, 30 European countries have blocked the broadcasting of the propaganda channels Russia Today and Sputnik, which considerably limits Russia’s ability to carry out its disinformation campaigns among the foreign public.