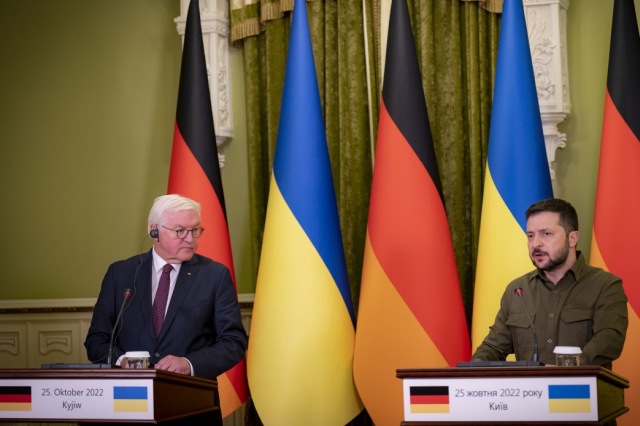 Ukrainian Armed Forces continue counter-offensive in the area of Kreminna-Svatove in eastern Ukraine, where they managed to liberate a number of settlements in recent days. Preparations are also underway to liberate Kherson in the south. Russian troops are focusing on securing defensive positions in these areas. They keep striking at critical infrastructure facilities on the territory of Ukraine. There have been more frequent cases when Russian planes in Belarus take to the air, but do not attack. The purpose of this tactic is to create additional pressure on the Ukrainian air defense and population.

Ukrainian Armed Forces continue counter-offensive actions in Luhansk region. In particular, over the last days they managed to liberate several population centers in the north of the region.

Russian troops carry out intensive shelling, which leads to the destruction of civilian infrastructure and civilian casualties. On October 24–26, at least 11 civilians were killed and 9 people were injured in Donetsk region.

The Armed Forces of Ukraine maintain close fire control over the military infrastructure and positions of the Russian army in the Kherson region, thus preparing the ground for the de-occupation of the settlements on the right bank of the Dnipro river. On October 25, the Armed Forces of Ukraine launched a missile attack on the base of the “Kadyrovites” in the temporarily occupied Kherson region. However, the Minister of Defense of Ukraine Oleksii Reznikov acknowledged the slowdown of the Ukrainian Armed Forces’ advance in the Kherson sector, explaining it by the weather conditions and cautious tactics of the Ukrainian military.

The Russian troops keep preparing for the offensive of the Ukrainian Armed Forces, in particular, they are arranging defensive positions on the left bank of the Dnipro river, mining the coastline. Shelling of the territory of Mykolaiv region is ongoing.

Shelling of the territory of Ukraine

On October 25, a fire broke out at a gas station in Dnipro due to the falling debris of a Russian missile. According to the updated information, 2 people were killed, 4 were injured.

On the night of October 27, a strike was made on the territory of Kyiv region.

The shelling of the territory of Kharkiv region continues. During the last days at least 5 civilians were injured in Kharkiv region.

The Office of the UN High Commissioner for Human Rights updated the data on civilian casualties as a result of the full-scale Russian invasion of Ukraine. As of October 24, the confirmed losses amount to 16,150 people (6,374 killed, 9,776 wounded). According to the Prosecutor General’s Office, as of the morning of October 26, the number of children affected by the armed aggression of the Russian Federation in Ukraine has increased to 1,252 (430 children killed, 822 injured). According to the governmental platform Children of War, as of October 26, 9441 children were deported, 238 went missing.

On October 26, another exchange of prisoners took place. Ukraine managed to return 10 servicemen, including 1 officer and 9 privates and sergeants. Head of the Office of the President Andrii Yermak informed that the body of American volunteer Joshua Alan Jones was also handed over to the Ukrainian side.

On October 25, in accordance with the Geneva Convention, another operation to transfer the bodies of fallen soldiers was carried out. Ukraine returned 25 more bodies of servicemen.

Since the beginning of the full-scale invasion of Ukraine by the Russian Federation, the National Police has initiated more than 39 thousand criminal proceedings on war crimes committed by the military of Russia and Belarus. Evidence of such crimes is regularly detected in the previously occupied territories of Ukraine. On October 24, Ukrainian law enforcement officers found the body of another civilian killed by the Russian military in Kyiv region.

Under the coordination of the Ministry for Reintegration of the Temporarily Occupied Territories of Ukraine and in cooperation with the regional military administrations, the evacuation of people with limited mobility from the frontline areas continues. In particular, in October, more than 600 people in need of special care were evacuated from Zaporizhzhia, Dnipropetrovsk and Kharkiv regions.

Evacuation of residents from Donetsk region also continues. Over 5 thousand people, including at least 700 children and more than 500 people with disabilities, have left the region for safer areas of Ukraine this month. In total, about 18 thousand Ukrainians have evacuated from dangerous regions, including the temporarily occupied territories.

The situation in the temporarily occupied territories of Zaporizhzhia region is aggravating. Due to the occupation by Russian troops, Zaporizhzhia NPP does not generate electricity, consuming it for its own needs; there are constant interruptions in its supply. Gas supply in the temporarily occupied territories of the region has been absent for three months. In addition, Russian troops increased pressure on ZNPP employees, who are forced to sign contracts with Rosatom.

The head of Zaporizhzhia Regional Military Administration Oleksandr Starukh stated that since the beginning of the full-scale invasion, the Russian military have kidnapped 540 people in the temporarily occupied territories of the region, 208 of them are still in captivity.

Due to the Russian armed aggression, immovable cultural heritage and cultural values on the territory of Ukraine continue to be destroyed. The Ministry of Culture and Information Policy has verified more than 550 episodes of destruction or damage to cultural heritage sites, 171 sites with the status of a monument, 146 objects of valuable historical buildings, 58 monuments and works of art, as well as 44 museums.

On the night of October 25, about seven explosions occurred in the village of Svitlodolynske in Melitopol district (Zaporizhzhia region). In the morning of the same day there was a powerful explosion near the TV company building in the occupied Melitopol. According to the mayor of the city Ivan Fedorov, the explosion occurred near the so-called branch of the Russian Federal Security Service.

On October 24, there was information about the explosion of a railway track in the Bryansk region of the Russian Federation, which is actively used for military rail transport between Russia and Belarus.

During the 5th Ukrainian-German Economic Forum, Minister of Economy Yuliia Svyrydenko estimated that the unemployment rate in Ukraine will reach 30% by the end of 2022. Therefore, the Government will intensify the implementation of the mechanism of involving the unemployed in the “Recovery Army” of the country. Thus, the Government plans to involve the temporarily unemployed in the performance of socially useful work, which is needed in the regions, and the state will pay for their work at the minimum wage. It is noted that the unemployed will be able to be involved in the performance of works that are of a defensive nature, works on elimination of the consequences of emergencies of man-made, natural and military nature.

On October 24-25, the first parliamentary summit of the International Crimean Platform was held in Zagreb. Delegations from more than 50 countries and institutions were invited to participate in the event. During the summit, decisions and practical steps were developed to restore Ukrainian sovereignty over the temporarily occupied Crimean peninsula. In his speech at the summit, Vice-President of the European Parliament Othmar Karas stated that the EU would never give up the struggle for the de-occupation of Crimea and other Ukrainian territories seized by Russia and would provide Ukraine with the necessary assistance. Chairman of the Verkhovna Rada Ruslan Stefanchuk called on the international community to create groups in their parliaments to support the International Crimean Platform. As a result of the parliamentary summit, a joint declaration was adopted on strengthening international cooperation to restore the territorial integrity of Ukraine and to continue political pressure on Russia.

On October 25, Berlin hosted the International Expert Conference on the Recovery, Reconstruction and Modernization of Ukraine, organized by the European Commission. The event brought together experts from all over the world to present the strategy of post-war reconstruction of Ukraine with the participation of the international community. Within the framework of the conference, Volodymyr Zelenskyi made a video address to the participants, calling on the international community to establish a “financial Ramstein” to support and restore Ukraine’s economic stability, as well as to determine a mechanism for compensating Ukraine for losses from Russian assets. According to Federal Chancellor of Germany Olaf Scholz, the reconstruction of Ukraine will be a “Marshall Plan of the XXI century” and an opportunity to build a more resilient and stronger country that requires public and private sector contributions from all international partners. At the end of the conference, President of the European Commission Ursula von der Leyen noted that Ukraine should continue the process of decentralization and the development of other reforms to mobilize sustainable assistance from partners aimed at restoring the country.

Leaders of foreign states continue to visit Ukraine demonstrating support in countering the aggression of the Russian Federation. On October 25, the President of Ukraine held a meeting with Federal President of Germany Frank-Walter Steinmeier, who arrived in Kyiv for the first time since the beginning of the full-scale invasion. The Presidents discussed further development of bilateral relations and enhancement of cooperation in security, economy, humanitarian interaction and restoration of territorial integrity of Ukraine. Following the visit, the parties have approved a joint statement that consolidates the personal patronage of the German President over the process of reconstruction of Chernihiv region. Also, Steinmeier promised to transfer additional MARS MLRS and Panzerhaubitze 2000 howitzers for the enhancement of defense capabilities of Ukraine.

Also, the President of Ukraine met with President of Guinea-Bissau, Chairman of the Economic Community of West African States (ECOWAS) Umaro Sissoco Embaló. He is the first African leader to visit Ukraine after February 24. The Presidents discussed the security situation in the country and cooperation in the framework of international organizations, in particular, agreed to further support the UN resolutions on compensation mechanisms and the establishment of a special tribunal to investigate the crimes of the Russian Federation in Ukraine.

An increasing number of countries officially recognize the terrorist nature of the Russian authorities. The Senate of Poland unanimously adopted a resolution on the recognition of Russia as a terrorist regime and called on all countries to consolidate this status for Putin’s regime.

Amid Russia’s blackmail over the possible use of nuclear weapons, CIA Director William Burns visited Ukraine in early October to meet with Zelenskyi and other officials. During the visit, Burns reaffirmed the United States’ support for Ukraine in countering Russian aggression, including the continuation of intelligence sharing between the parties.

Partner countries keep providing military assistance to Ukraine. NATO Secretary General Jens Stoltenberg stated that the Alliance should strengthen its support for Ukraine to ensure its victory. He informed on the intention of NATO members to continue supplying Ukraine with necessary armaments. German Chancellor Olaf Scholz announced that Germany would deliver 3 more IRIS-T air defense systems designed to destroy cruise and ballistic missiles and various aircrafts to Ukraine as soon as possible. The Australian Government decided to transfer 30 more Bushmaster armored vehicles to Ukraine. It is also planned to send Australian military to the UK to assist with the training of Ukrainian servicemen.

National Anti-Corruption Bureau of Ukraine put on the wanted list former head of the National Bank Kyrylo Shevchenko, who was dismissed in early October. He is suspected of embezzling funds of Ukrgasbank by abuse of office and forgery.