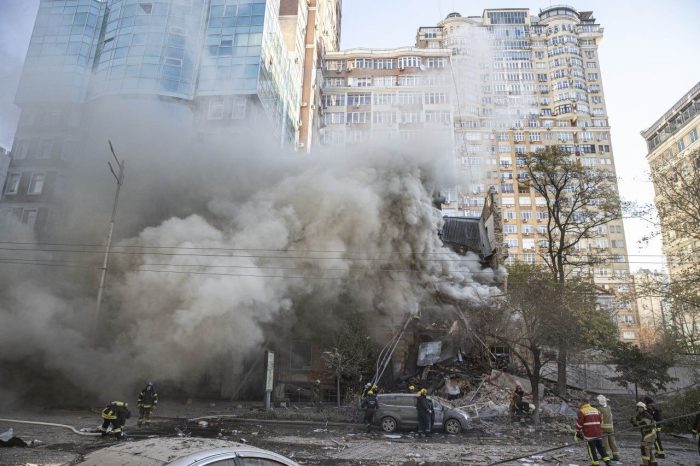 The situation on the frontline remained without significant changes over the last week. Ukrainian Armed Forces are preparing to continue the offensive in Luhansk and Kherson regions. Russian troops are attacking near Bakhmut and Avdiivka in Donetsk region.

Intensive strikes on civilian and critical infrastructure of Ukraine with the use of Iranian-made kamikaze drones continue. In the morning of October 17, a series of attacks on the capital was carried out, in particular, the central part of Kyiv was once again hit by drones.

Russian troops are reinforcing their defenses on the border of Svatove-Kreminna, trying to prevent the development of the Ukrainian offensive from the territory of Kharkiv region.

In Donetsk region Russian troops keep conducting offensive operations near Bakhmut and Avdiivka. They have partial success in both directions.

Ukrainian Armed Forces strike at military infrastructure in the temporarily occupied territories. Moreover, on Sunday morning, October 16, the building of Donetsk city hall used by the occupation administration of the Russian Federation was damaged as a result of a shelling.

Intensive shelling of Donetsk region by Russian troops continues, resulting in destruction of civilian infrastructure and losses among civilians. On October 13–16, at least 3 civilians were killed and 15 people were injured in Donetsk region.

The shelling of the territory of Zaporizhzhia region intensifies. On October 13, the Russian troops shelled the town of Orikhiv and settlements near it. As a result 1 person was killed, 13 people were injured. On the night of October 14, a missile strike was launched against Zaporizhzhia. The next night the city was attacked with both missiles and kamikaze drones.

The Ukrainian Armed Forces continue to keep the Russian military infrastructure in Zaporizhzhia region under fire control. According to the mayor of the temporarily occupied Melitopol Ivan Fedorov, on October 14, the Ukrainian military struck a military base in the town.

Ukrainian Armed Forces carry on preparations for further counter-offensive actions in the north of the region. Particularly, in recent days they have been conducting intensive attacks on Russian positions, causing significant losses in equipment in Beryslav and Kakhovka districts of Kherson region.

Russian troops are shelling Mykolaiv. As a result of a missile strike on the city on the night of October 13, 8 people were killed. In the evening of October 16, Mykolaiv region was again attacked by drones and missiles. UAVs hit industrial infrastructure facilities and a pharmaceutical warehouse in Mykolaiv.

On October 13, a missile attack was carried out on the territory of Lviv region. A Russian missile hit a military facility. Air defense systems operated in Chernivtsi and Ternopil regions.

In the evening of October 13, Russian troops struck at Kharkiv and the territory of the region. As a result of damage to critical infrastructure facilities, power supply was interrupted. In the afternoon of October 14, the attacks on Kharkiv continued. Border districts of the region are being shelled. In recent days, at least 1 person was killed and 13 people were injured in Kharkiv region.

On October 15, Russian troops launched a missile strike on the Kyiv region, resulting in severe damage to the energy infrastructure. In the morning of October 17, kamikaze drones attacked Kyiv. Explosions were recorded in the city center.

Shelling continues in Dnipropetrovsk region. On the night of October 17, as a result of shelling of an energy facility, emergency power cuts took place in the region. Russian troops are concentrating their efforts on strikes on the Nikopol area. In recent days, at least 10 people were injured in the region.

Besides, Russian troops continue shelling Chernihiv and Sumy regions from the Russian territory.

On October 13, in the Russian city of Belgorod, the work of air defense was recorded. As a result of an unsuccessful launch, a missile hit a multi-storey building in the city. On the same day a warehouse with ammunition was blown up in Belgorod region. In the evening of 14 October a substation exploded in Belgorod, as a result of which the power supply was cut off in part of the city. on 15 October a fire broke out at an oil depot near Belgorod as a result of shelling.

On October 13, another exchange of prisoners took place. The Ukrainian side returned 19 servicemen from Russian captivity. On the same day, 96 Ukrainian children were returned from Russia and the temporarily occupied territories.

The Ministry of Reintegration continues the program of evacuation from the frontline regions. About 400 people with limited mobility, people with disabilities and the elderly were evacuated from dangerous areas of Dnipropetrovsk and Zaporizhzhia regions.

The head of Donetsk Regional Military Administration Pavlo Kyrylenko said that in liberated Lyman (Donetsk region) bodies of 6 more dead people were found, who were killed during the occupation of the town by Russian troops.

According to the Kharkiv Regional Prosecutor’s Office, on October 13, the bodies of 2 men tortured by the Russian military were found in the liberated village of Kozacha Lopan.

The Ministry of Culture and Information Policy of Ukraine reports about another war crime of the Russian army. After refusing to participate in a concert in occupied Kherson, Russian soldiers shot and killed Yurii Kerpatenko, conductor of Kherson Music and Drama Theater, in his own home.

Ukrainian law enforcement officers indicate that abductions of people by representatives of the Russian security forces have been recorded in the occupied part of Kherson region. There are also reports of looting by Russian military, who steal cars and use trucks to take property from houses and apartments.

U.S. analysts from the Institute for the Study of War (ISW) believe that Russia continues to carry out massive, forced deportations of Ukrainians that are likely a campaign of deliberate ethnic cleansing. In its assessment, ISW notes that Russian officials have openly admitted that they are giving children from the occupied territories of Ukraine for adoption to Russian families. Analysts point out that Russian authorities may additionally participate in a broader campaign of ethnic cleansing through depopulation of Ukrainian territory, deportations and relocation of Russian citizens to Ukrainian cities.

Ukrainian deminers continue to work to clear mines and unexploded ordnance in the de-occupied territories. The mine threat keeps leading to civilian casualties. The body of a civilian who fell victim to an explosive mine laid by Russian troops was found near an abandoned Russian military camp in eastern Ukraine.

The situation at Zaporizhzhia nuclear power plant remains precarious. The National Resistance Center reports that Russia is trying to connect Zaporizhzhia NPP to its own power grid as soon as possible. Measures are being hastily taken at the facility to transfer the spent nuclear fuel storage system to Russian standards; nuclear reactors of ZNPP are being adapted to use Russian fuel assemblies.

Minister of Education and Science Serhii Shkarlet stated that 38 educational institutions were damaged as a result of Russian missile strikes on October 10 in Ukraine.

Prime Minister of Ukraine Denys Shmyhal informed that from 10 to 12 October Russia launched up to 130 missile and drone strikes on civilian and energy facilities, which led to power outages in a number of regions. 15 energy facilities that Russians tried to damage have been fully restored. Residents of Ukraine after October 10 independently reduced electricity consumption by an average of 10%.

On October 13, the Parliamentary Assembly of the Council of Europe adopted a resolution declaring “the current Russian regime as a terrorist one” following an urgent debate on “Further escalation in the Russian Federation’s aggression against Ukraine”. The PACE also voted to accelerate the establishment of a special international tribunal to investigate the crimes of Russian aggression against Ukraine and to create a comprehensive international compensation mechanism.

High Representative of the European Union for Foreign Affairs and Security Policy Josep Borrell criticized Putin’s regime for using nuclear blackmail. The politician promised that in case of a nuclear strike on the territory of Ukraine, the West will provide a powerful military response. This does not mean the use of nuclear weapons against Russia. At the same time, Borrell emphasizes the possibility of destroying the Russian army by conventional means. U.S. National Security Advisor Jake Sullivan also promised Russia a response to the use of nuclear weapons in Ukraine.

President of Ukraine Volodymyr Zelenskyi had a phone conversation with President of Lithuania Gitanas Nausėda. The heads of state discussed the situation at the frontline, Ukraine’s defense needs and its further Euro-Atlantic integration. In addition, Volodymyr Zelenskyi discussed with Crown Prince of the Kingdom of Saudi Arabia Mohammed bin Salman the issue of cooperation for the release of Ukrainian prisoners of war and the provision of financial assistance to Ukraine. It became known that Saudi Arabia will allocate humanitarian aid to Ukraine in the amount of $400 million.

NATO Secretary General Jens Stoltenberg stated that the Alliance is ready to provide Ukraine with the means to combat UAVs. Canadian Defense Minister Anita Anand announced new defense assistance to Ukraine worth over $47 million. The funds will be used for specialized cameras for UAVs, ammunition for 155 mm guns and other needs of Ukrainian troops. Spain decided to transfer four Hawk anti-aircraft missile systems to Ukraine to strengthen its air defense. Portugal declared its readiness to transfer 6 Soviet-made helicopters to Ukraine. In addition, Estonian Prime Minister Kaja Kallas announced the approval of a new package of military assistance to Ukraine, which includes winter gear, equipment and ammunition. Lithuanian Defense Minister Arvydas Anušauskas announced another package of military assistance to the Ukrainian Armed Forces and informed that German Panzerhaubitze 2000 self-propelled artillery systems repaired in Lithuania are already being returned to Ukraine.

The EU mission to train Ukrainian servicemen will be established in Poland. France will also train up to 2 thousand Ukrainian military on its territory, as well as provide Ukraine with Crotale air defense systems, effective against drone attacks.

Economic restrictions against Russia are being strengthened, in particular in terms of blocking the possibilities of circumventing the sanctions regime. Due to the threat of sanctions, the scope of the Mir payment system of Russian banks is limited. Kyrgyz bank Kompanion, which has international shareholders, stopped accepting such payment cards. The Central Bank of Sri Lanka also stated that the Russian payment system Mir will not work in the country due to sanctions.