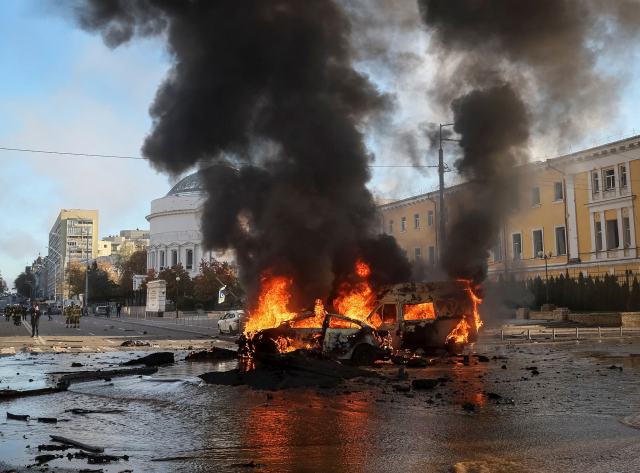 The Ukrainian Armed Forces continue their counteroffensive in the Luhansk and Kherson regions. The pace of advance has slowed to some degree due to the fortified defense line of Russian troops in both directions.

Russian forces have significantly intensified missile attacks on civilian and critical infrastructure in Ukraine. Since October 10, there have been massive missile and UAV attacks. Their priority goal is to put Ukraine’s energy system out of action before the start of the heating season.

The Ukrainian Armed Forces proceed with counteroffensive actions in the direction of Svatove, located in the north of the Luhansk region. Russian troops are reinforcing their defense positions in this direction.

The Ukrainian military continues strikes against command points, areas of concentration of manpower, weapons and military equipment, and ammunition depots of the Russian troops in the Luhansk region.

In Donetsk region, Russian troops continue to conduct offensive operations in the direction of Bakhmut and Avdiivka. In the area of Bakhmut, where the so-called Wagner group operates, they approached the town.

Intensive shelling of the Donetsk region persists, leading to the destruction of civilian infrastructure and civilian casualties. On October 12, Avdiivka’s central market was hit, which resulted in 7 people being killed and 12 wounded. In addition, during October 10–12, at least 16 civilians were killed and 10 injured in the Donetsk region.

Russian troops continue shelling Zaporizhzhia every night. According to the Zaporizhzhia Regional Military Administration, more than 70 people have been killed in the city over the past two weeks.

On October 11, explosions were recorded at the airfield in the temporarily occupied town of Melitopol, which is used as a base by the Russian military.

The Armed Forces of Ukraine continue their counteroffensive in the north of the region. They face a well-prepared defensive line and the need to consolidate their hold on the recaptured positions. This slows down the tempo of their advance. Strikes against Russian military infrastructure in the Kherson region are ongoing.

On the night of 12 October, explosions were recorded in Mykolaiv. In this direction, Ukrainian air defenses managed to destroy several Russian UAVs, including kamikaze drones. On the night of October 13, there was massive shelling of Mykolaiv. According to the local authorities, a five-story building was destroyed as a result.

On the morning of October 10, Russian troops carried out a massive shelling of Ukrainian territory, using rocket weapons and kamikaze drones. The center of Kyiv, Dnipro, Lviv, Kharkiv, and Kryvyi Rih, and infrastructure facilities in Kyiv, Khmelnytskyi, Zhytomyr, Ivano-Frankivsk, and Poltava regions were hit.

However, other missiles and drones caused significant damage and casualties. According to preliminary information, at least 23 people were killed and 100 injured as a result of Russian strikes in Ukraine on October 10.

The main target of the attack was critical infrastructure facilities – Ukraine’s energy supply system (including the Trypilska and Burshtynska thermal power plants and CHPP 6 in Kyiv). According to Prime Minister of Ukraine Denys Shmyhal, as a result of massive shelling on October 10, energy infrastructure facilities in 11 regions and the city of Kyiv were damaged. Ukrainian Energy Minister Herman Galushchenko reported that about 30% of Ukraine’s energy infrastructure was hit as a result of Russian rocket attacks. Power outages were recorded in 15 regions and the city of Kyiv; there were problems with water supply in some regions. Due to the power outage in Kryvyi Rih, 854 miners were trapped in four mines.

Repair work is being carried out promptly at the damaged sites, but until the situation is finally normalized, central and local authorities are reporting on possible rolling blackouts. The population is urged to save electricity. Because of the damage to the energy system, Ukraine was forced to suspend exports of electricity to Europe.

Air defense forces shot down Russian missiles over the territory of Kyiv and Khmelnitskyi regions. The Ukrainian military indicated that air defense forces destroyed a total of 20 cruise missiles and 13 kamikaze drones.

On October 12, the Russian military launched missile strikes against energy facilities in Dnipropetrovsk region and Sumy region. On the morning of October 13, a kamikaze drone attack was detected on the territory of Kyiv region.

Besides, shelling of the border areas of Chernihiv and Sumy regions from Russian territory is ongoing. Intense strikes by Russian troops in the areas of Nikopol and Marhanets in Dnipropetrovsk region also continue.

Explosions were recorded on the territory of the Kursk, Belgorod and Bryansk regions of the Russian Federation bordering Ukraine. There were reports of strikes against military infrastructure and air defense system positions. Also in the evening of October 10, an explosion was detected on the territory of a Russian military unit in the city of Dzhankoi in temporarily occupied Crimea.

The Office of the United Nations High Commissioner for Human Rights updated the data on civilian casualties as a result of the full-scale Russian invasion of Ukraine. As of October 10, the confirmed casualties amount to 15,592 people (6,221 killed, 9,371 wounded). According to the Office of the Prosecutor General, as of the morning of October 12, the number of children affected by the armed aggression of the Russian Federation in Ukraine increased to 1,230 (422 children were killed, 808 were injured). According to the governmental platform Children of War, as of October 12, 8140 children were deported, 240 went missing.

The situation at Zaporizhzhia NPP remains hazardous. As a result of the shelling, the plant was de-energized for the second time in five days, which emphasizes the “unstable” situation regarding nuclear safety at the facility. Pressure on the NPP personnel by the Russian military continues. On October 10, Energoatom reported the kidnapping of Valerii Martyniuk, Deputy Director General of Zaporizhzhia NPP for Personnel.

The Office of the UN High Commissioner for Human Rights states that the missile attacks by the Russian armed forces against civilian targets and infrastructure in recent days in Ukraine can be qualified as war crimes. The International Criminal Court will investigate Russia’s massive missile attack on October 10. The United Nations and other organizations with humanitarian functions in Ukraine claimed that Russia disrupted their work by firing missiles at cities across the country. The rocket attacks particularly hampered the movement of workers and the delivery of essential supplies in the east of the country, where people are in desperate need of aid.

In Donetsk region, Ukrainian law enforcement officers  identified mass graves in the recently liberated towns of Sviatohirsk and Lyman. They exhumed 120 bodies, some of which have clear signs of violent death. Also, not far from Sviatohirsk Lavra, the Security Service of Ukraine discovered a place of illegal detention of local residents by Russian military. During the inspection, SSU investigators found items that directly indicate the use of torture.

Kharkiv law enforcers conducted an additional inspection of the convoy of cars, which was shot by the Russian military in late September near the village of Kurylivka, Kupiansk district, and found another victim of the shooting. Thus, the number of victims increased to 25.

The head of Zaporizhzhia Regional Military Administration Oleksandr Starukh informed that mass abductions of citizens continue in the temporarily occupied territories. The number of kidnapped people in the region is at least 529. In addition, after the announcement of the illegal “annexation” of a part of the region to Russia, the Russian military greatly restricted the movement out of the temporarily occupied territory.

On the morning of October 12, an explosion was heard in the temporarily occupied Melitopol (Zaporizhzhia region). According to preliminary information, a car exploded. In addition, Russian sources report an attempt on the life of a representative of the occupation administration in the Kherson region.

Ukraine stops exporting electricity to Europe due to Russian rocket attacks on energy facilities. Ukraine’s electricity exports not only helped Europe reduce its consumption of Russian energy resources, but in recent months have brought more than $4.9 billion into the Ukrainian budget.

Politico cited European officials as saying that the European Commission is working to provide Ukraine with about €1.5 billion in monthly budget support in 2023.

On October 11, in response to Russia’s massive missile attacks on Ukrainian cities, the leaders of the Group of Seven countries held an urgent meeting. Ukrainian President Volodymyr Zelenskyi took part online and called on partners to increase support for Ukraine and isolate Russia. In order to mitigate the threat to Ukraine from the territory of Belarus, he proposed the deployment of an international observation mission on the Ukrainian-Belarusian border. Following the meeting, the G7 leaders issued a joint statement condemning the actions of Russia and its president aimed at escalating the conflict, while at the same time warning against the use of weapons of mass destruction against Ukraine.

On October 12, a meeting of the Ukraine Defense Contact Group (Ramstein-6) began in Brussels as part of a two-day meeting of NATO defense ministers under the auspices of the United States. The meeting was attended by representatives of 50 countries who agreed to provide support for Ukraine’s defense capabilities in the face of Russian aggression. One of the main issues addressed at the Brussels meeting was providing Ukraine with modern air defense systems. NATO Secretary General Jens Stoltenberg pointed out that the priority in the supply of weapons to Ukraine from the allies of the Alliance should be the supply of air defense equipment and systems of different types and purposes in order to protect Ukrainian cities and territories and its critical infrastructure from attacks by Russia.

The presidents of 11 Central-Eastern European countries (Bulgaria, Montenegro, Czech Republic, Estonia, Lithuania, Latvia, Northern Macedonia, Poland, Romania, Slovakia and Hungary) condemned in a joint statement the massive bombing of Ukrainian cities by Russia. They recognized the attacks as a war crime that has no statute of limitations and is subject to the jurisdiction of international courts. The OSCE representatives also categorically condemned Russia’s attacks on civilian targets in Ukraine.

Within the framework of the resumed 11th Extraordinary Special Session of the UN General Assembly, a resolution “Territorial integrity of Ukraine: defending the principles of the Charter of the United Nations” was adopted on October 12, condemning the Russian pseudo-referendums in the occupied territories of Ukraine and demanding that Russia abandon its “attempted illegal annexation”. The resolution was supported by 143 countries; only Russia, Belarus, North Korea, Nicaragua and Syria voted against it. The majority of abstaining countries were African countries, as well as China and India.

Taking into account recent events, military assistance to Ukraine from partner states is expanding. The Netherlands will provide Ukraine with anti-aircraft missiles worth a total of €15 million to strengthen protection against Russian missile attacks. The German Defense Ministry announced that in the coming weeks Ukraine will receive additional PzH 2000 self-propelled artillery systems, MARS II multiple rocket launchers, as well as the first of four advanced IRIS-T surface-to-air missile systems. According to Ukrainian Defense Minister Oleksii Reznikov, this air defense system had already arrived in Ukraine as of October 12. In addition, Germany in cooperation with Denmark and Norway will provide Ukraine with 16 self-propelled Zuzana-2 howitzers manufactured in Slovakia. France promises to provide Ukraine with six CAESAR anti-missile launchers and anti-aircraft missiles. The United Kingdom also intends to transfer anti-aircraft missiles to Ukraine. The United States is ready to provide Ukraine with advanced weapon systems, including modern air defense systems. In particular, the transfer of two advanced anti-aircraft missile systems NASAMS has been announced. Also, four more American HIMARS missile defense systems arrived in Ukraine. In addition, it has been agreed to launch an EU training mission to train the Ukrainian military.