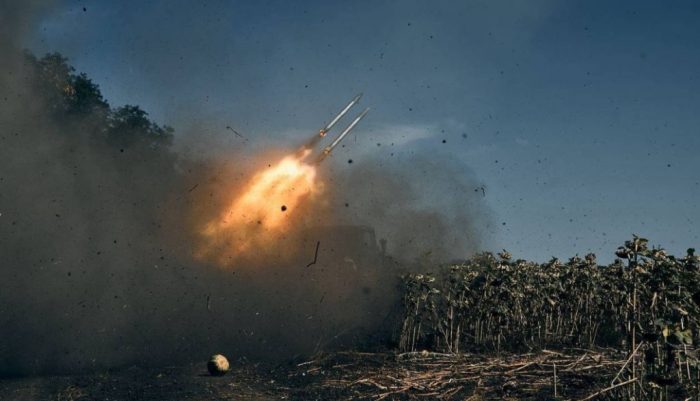 The Russian military command announced its intention to withdraw troops from the bridgehead on the right bank of the Dnipro, as its retention becomes impossible under the conditions of increased pressure from the Armed Forces of Ukraine on the routes to support the group and strikes on the locations of the Russian army. Russian troops have now withdrawn from some positions on the front line, but their military presence remains in Kherson City.

In other areas of the front, the situation has not undergone significant changes. Active hostilities are taking place on the territory of Donetsk region. Over the past few days, the Russian military has reduced the number of missile strikes on Ukrainian critical infrastructure, but continues constant shelling of front-line and border areas, and also uses kamikaze drones for attacks deep into the territory of Ukraine.

The front line in Luhansk region has not changed in recent days. According to the head of the Luhansk Regional Military Administration Serhii Haidai, the Armed Forces continue to attack and advance in the Svatove direction, inflicting significant losses on the Russian army.

Russian troops do not stop offensive actions in Avdiivka and Bakhmut districts.They continue shelling civilian infrastructure on the territory of Donetsk region, including cities that were recently liberated from occupation. During November 7-9, 9 people died in the region, 30 people were injured.

The troops of the Russian Federation are shelling the territory of the Zaporizhzhia region. On the morning of November 7, they shelled areas near Zaporizhzhia; On November 8, they struck, using S-300 missile systems.

The Russian command, faced with continuous pressure from the Armed Forces of Ukraine on the positions of Russian troops, as well as constant shelling of the logistical routes of their support, publicly announced the withdrawal of troops from the bridgehead on the right bank of the Dnipro. On November 9, Sergey Surovikin, the commander of the Russian forces conducting aggression against Ukraine, recognized the impossibility of preserving the bridgehead. He received the permission of the Minister of Defense of the Russian Federation to withdraw troops from Kherson and maintain defense on the left bank of the river. On the same day, it was recorded that the Russian military blew up five bridges on the right-bank part of the Kherson region, carried out in order to slow down the advance of the Armed Forces of Ukraine and cover their own retreat.

Contrary to the statement of the Ministry of Defense of the Russian Federation, according to the information of the President’s Office, as well as the heads of the Mykolaiv and Kherson Regional Military Administrations, Ukraine sees no signs of Russia’s final retreat. There is a significant grouping of Russian soldiers in Kherson. So far, it can be stated that Russian troops have withdrawn from a number of settlements on the front line.

Russian troops are shelling the recently de-occupied territories of the Kherson region. As a result, at least 1 person died in recent days, and 1 civilian was injured.

On November 9, Russian sources reported the death of one of the heads of the occupation administration of the region, Kyrylo Stremousov, in the temporarily occupied territories of the Kherson region as a result of a road accident.

Russian troops continue to launch missile and artillery strikes, carry out attacks using UAVs on all populated areas of Ukraine.

On the evening of November 7, explosions were recorded in the Kremenchuk district of the Poltava region.

On the night of November 9, Russian troops attacked the Dnipro using kamikaze drones. Some of the drones were destroyed by air defense forces, but others hit the postal depot. According to preliminary information, at least 4 people were injured. In addition, Russian troops continue constant shelling of the Nikopol and Marhanets districts of the Dnipropetrovsk region with the help of rocket and heavy artillery.

Russian military shelling of the territory of the Kharkiv region continues. As a result, at least 2 civilians were injured in recent days. Also, the threat of landmines, due to which 2 people died in Kharkiv region on November 7-8, and another 4 people were injured, remains extremely relevant.

Mortar and artillery shelling of the border regions of Chernihiv and Sumy regions from the territory of the Russian Federation continues. The head of the Chernihiv region, Viacheslav Chaus, called for intensifying work on the departure of residents of border settlements deep into the territory of the region due to constant shelling.

The Office of the UN High Commissioner for Human Rights has updated data on civilian casualties as a result of the full-scale Russian invasion of Ukraine. As of November 7, confirmed losses amount to 16,462 people (6,490 killed, 9,972 wounded). According to the Office of the Prosecutor General, as of the morning of November 9, as a result of the Russian-Ukrainian war, the number of injured children in Ukraine increased to 1,258 (430 children died, 828 were injured). According to the government platform Children of War, as of November 9, 10,764 children were deported, 262 were missing. The Minister of Reintegration of the Temporarily Occupied Territories Iryna Vereshchuk said that Ukraine managed to return only 69 children from the territory of Russia.

The Russian leadership continues covert mobilization in the temporarily occupied Crimea. The leaders of the occupation administrations and “conscription commissions” are campaigning for people to sign a contract after three months of military service. At the same time, part of such contracts are signed under pressure or under the influence of propaganda.

The humanitarian situation in the Kherson region remains extremely difficult. There is no electricity and water supply in the city, the Internet and mobile communications from Ukrainian operators have disappeared. Russian military blocks the “green corridors”. Systematic kidnappings of local residents and looting continue.

New cases of forced removal of civilians from the Kherson region to the territory of the Russian Federation are recorded. About a hundred children with disabilities were taken out of the psycho-neurological boarding house in Dnipriany, Kakhovka district. Patients of the boarding house for the elderly from the city of Kakhovka were also relocated.

Ukrainian law enforcement officers continue to uncover traces of war crimes in the de-occupied territories. Law enforcement officers found 3 bodies of civilians in the Kherson region. Two of them died as a result of Russian troops shelling the settlement; traces of violent death were recorded on the body of the third. In the Kharkiv region, the investigation-prosecutor group exhumed the body of a 37-year-old driver with bullet wounds who was shot during evacuation.

The fact of numerous war crimes is confirmed by the UN International Commission to Investigate the Situation in Ukraine. Their report documented extrajudicial executions, as well as torture, abductions and attacks on civilians fleeing the occupation. The fact of forced deportation of Ukrainians and the existence of filtration camps are being investigated separately.

The deputy head of the National Police of Ukraine, Maksym Tsutskiridze, said that the police had initiated more than 42,000 criminal proceedings for war crimes and identified about 168,000 Russian soldiers.

Evacuation measures continue from the territories where active hostilities are taking place. In total, more than 288,000 people have been evacuated over the past three months, of which 60,000 are children, 7.5,000 are persons with disabilities.

In the temporarily occupied Mariupol, the occupation administration continues to demolish the damaged houses of local residents. People are warned the day before the action that they need to pick up their belongings and vacate their apartments. Instead, they are not provided with new housing or compensation. It is assumed that in this way the Russian military destroys the traces of their crimes.

According to Dmytro Lubinets, the Verkhovna Rada Commissioner for Human Rights, since the beginning of the war in Ukraine, 2,688 educational institutions have been destroyed, 311 of which cannot be restored, as well as 786 kindergartens.

On the territory of the Kherson region, on November 7, a mini-vehicle of the protection of the deputy of the Russian State Duma Alexander Borodai, who in 2014 acted as the curator of the Russian hybrid aggression in the Donbas, was blown up. Borodai himself was in another car and was not injured.

Ivan Fedorov, the mayor of the temporarily occupied Melitopol, reported that on November 8, resistance forces in the Zaporizhzhia region set fire to the church in which the headquarters of Russian troops was located.

Economy Minister Yuliia Svyrydenko said that due to Russia’s destruction of civilian infrastructure, Ukraine’s gross domestic product is likely to fall by 39% year-on-year in 2022, compared to a previous forecast of 35%.

The Ukrainian authorities returned the assets of five strategically important enterprises to the state ownership (JSC “Motor Sich”, PJSC ” Zaporizhtransformator”, PJSC “AvtoKrAZ”, “Ukrnafta” and “Ukrtatnafta”). According to the President of Ukraine Volodymyr Zelenskyi, such a decision was dictated by military necessity. Currently, the mentioned enterprises will work to meet the needs of the security and defense sector.

Against the background of the successes of the Ukrainian army in liberating the occupied territories in the Kherson region, Russia intensified calls for negotiations. The press secretary of the Ministry of Foreign Affairs of the Russian Federation, Maria Zakharova, stated that the Russian Federation is ready to conduct negotiations with Ukraine “taking into account the realities that are emerging at the moment.” At the same time, the Ukrainian side considers such statements to be another manipulation by Russia to delay the regrouping of its troops in the south. President of Ukraine Volodymyr Zelenskyi named the conditions under which negotiations can begin, in particular: restoration of territorial integrity of Ukraine, punishment of the Russian Federation for war crimes and Ukraine’s receipt of international security guarantees. The United States of America considers the statements of the leadership of the Russian Federation about readiness for negotiations to be proofless that are not supported by real steps. According to the spokesman of the US State Department, Ned Price, there is no indication that Russia is currently ready to take a responsible part in the negotiations.

The leaders of Ukraine continue to maintain contacts with international partners to inform about the situation in the country and attract more support in countering Russian aggression. President of Ukraine Volodymyr Zelenskyi met with a member of the US President’s Cabinet, US Permanent Representative to the UN Linda Thomas-Greenfield, who was visiting Kyiv. The parties discussed the strengthening of defense assistance for the protection of the airspace of Ukraine, the continuation of the implementation of the “grain initiative” and cooperation within the framework of UN activities.

The head of state also had telephone conversations with Prime Minister of Israel Benjamin Netanyahu and Prime Minister of the Netherlands Mark Rutte. The talks focused on restoring Ukraine’s energy infrastructure, strengthening global food security and cooperation on security challenges.

The efforts of the international community to provide financial and humanitarian aid to Ukraine are intensifying. The European Commission announced an unprecedented support package for Ukraine in the amount of up to 18 billion euros for 2023. The aid will be provided in the form of soft loans, which will amount to an average of 1.5 billion euros per month. The funds will help to cover a significant part of Ukraine’s short-term financing needs for the next year. Germany will provide 7.6 million euros to the International Commission on Missing Persons to search for Ukrainians who disappeared as a result of the full-scale invasion of Russia. The United States will allocate an additional $25 million from the United States Agency for International Development (USAID) to support vulnerable sections of the population in Ukraine, including internally displaced persons.

Ukraine received the first batch of generators from Lithuania. 13 generators were purchased with the funds collected within the framework of the AŠ ESU UKRAINA campaign initiated by the diplomatic mission.