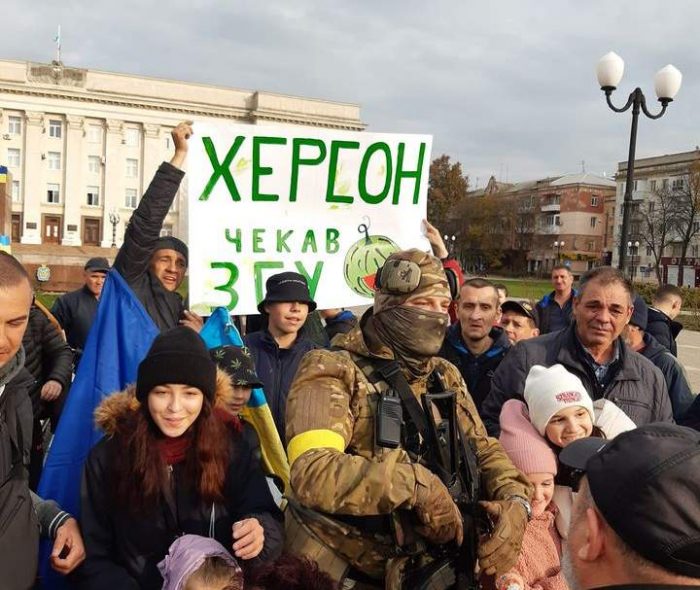 As a result of counter-offensive actions of the Armed Forces of Ukraine and establishing fire control over the logistics routes supplying the Russian grouping, the Russian troops retreated from the bridgehead on the right bank of the Dnipro River. As a result, the Ukrainian military managed to liberate more than 3 thousand kilometers of territory, including the regional center of Kherson. Russian military are currently building a defense line on the left bank of the Dnipro River and strengthening their grouping in Zaporizhzhia region. Active hostilities continue in Luhansk and Donetsk regions.

Russian troops carry out attacks near Bakhmut, Avdiivka and Vuhledar. They increased pressure on the positions of the Ukrainian Armed Forces in the north of the region.

Shelling of civilian infrastructure in the Donetsk region is ongoing, including in the cities that have recently been liberated from occupation. Within 10–13 November 6 people were killed and 14 people were injured in the region.

According to the General Staff of the Armed Forces of Ukraine, Russian troops are consolidating their positions on the temporarily occupied territory of Zaporizhzhia region. Having retreated from Kherson, they are moving additional forces to the area of Melitopol.

Russian troops retreated from the right bank of the Dnipro River, destroying the river crossings on the night of November 11. Retreating from the right bank foothold, Russian troops kept shelling the residential infrastructure of Mykolaiv. In particular, the head of the Mykolaiv Regional Military Administration Vitalii Kim reported that on November 11, during another rocket attack, Russian troops hit a five-storey building in a residential area of the city. As a result, at least 6 people were killed on the spot, and another person died in hospital.

As Russian troops withdrew, the Ukrainian Armed Forces continued their offensive to regain full control over the right-bank part of Kherson region. On November 11, Ukrainian troops entered Kherson, liberating the only regional center occupied by Russian troops since the beginning of the full-scale invasion on February 24.

Russian troops are further strengthening their positions on the left bank of the Dnipro River, demanding that the local population leave these territories. On November 12, the shelling of a settlement in the area was recorded, as a result of which 2 people were killed. According to the head of Kherson Regional Military Administration Yaroslav Yanushevych, in this way the Russian military are trying to force local residents to leave the areas near Dnipro, where the Russian defense line is currently being built.

The shelling of Nikopol and Marhanets in Dnipropetrovsk region is ongoing. As a result, 2 people were wounded on November 11.

Mortar and artillery shelling of the border areas of Chernihiv and Sumy regions from the territory of the Russian Federation persists.

Russian troops are also shelling Kharkiv region, where at least 3 people were wounded in recent days. In the evening of November 13, a rocket attack was launched on Kharkiv itself.

On November 11, another exchange of prisoners took place, which led to the release of 45 servicemen of the Armed Forces of Ukraine. In general, since the beginning of the full-scale Russian aggression 1183 Ukrainians have returned from captivity as a result of exchanges.

Evacuation of civilians from the temporarily occupied territories is in progress. Last month, through the efforts of the Ukrainian authorities, about 5 thousand citizens were evacuated (about 2 thousand people from Kherson region, more than 2 thousand people from Zaporizhzhia region and about 500 people from Donetsk and Luhansk regions). In total, since the beginning of the full-scale invasion, 165 evacuation corridors have been organized, through which more than 350 thousand civilians have left the dangerous territories.

At the same time, the mayor of the temporarily occupied Melitopol (Zaporizhzhia region) Ivan Fedorov stated that the Russian military continue to impede the evacuation of civilians to the territory controlled by the Ukrainian government. It is possible to leave the temporarily occupied territories of Zaporizhzhia region through the Russian checkpoint in Vasylivka only after receiving the so-called passes. The queue to receive them is formed for a month in advance.

In Kherson, liberated by the Armed Forces of Ukraine, the humanitarian situation remains dire. Before retreating Russian troops destroyed key infrastructure, including transport communications, electricity, water and heating networks. A 100-meter TV tower and at least four bridges were destroyed. The mayor of the city stated that there is a shortage of medicines and food in Kherson.

It also became clear that the Russian military stole most of the animals from the Kherson zoo. The National Resistance Center of Ukraine reported that almost 15 thousand museum exhibits were taken from cultural institutions of Kherson region. Valuable funds of the regional library were also moved out of Kherson.

According to the President of Ukraine, Ukrainian investigators have already documented over 400 Russian war crimes in the liberated territory of Kherson region. Ukrainian law enforcement officers discovered the remains of human bodies in the course of the regular inspection in the urban-type settlement of Beryslav district. According to preliminary data, the found remains belong to 3 local residents who were killed during the capture of the settlement by Russian troops.

The mine threat in the territories recently liberated from occupation remains pressing. Russian troops left thousands of mines, tripwires and unexploded shells there. On November 11 alone, at least 4 people were injured by mines (including 2 children in Kherson region and 2 teenagers in Kharkiv region). On November 12, 1 sapper was injured while demining one of the administrative buildings in Kherson. On November 13 in the de-occupied territories of Kherson region a car of Ukrzaliznytsia (Ukrainian Railways) with 6 people in it exploded on a mine. A car with 4 local residents was also blown up. During the day 1 sapper was killed and 4 more were injured while clearing mines in the region.

At the COP27 climate talks in Egypt, Ukraine declared that Russia’s invasion is causing an environmental and humanitarian catastrophe. According to Svitlana Hrynchuk, Assistant Minister of Environmental Protection and Natural Resources of Ukraine, heavy shelling and movement of troops and tanks have polluted the air, water and land. One fifth of Ukraine’s protected areas have been destroyed as a result of the fighting. According to the World Wildlife Fund, more than 6 million Ukrainians have limited access to clean water because of the war, and more than 280,000 hectares of forests have been destroyed or cut down.

An assassination attempt on the so-called Deputy Minister of Culture, Sports and Tourism of Zaporizhzhia region Andrii Boyko took place in the temporarily occupied Melitopol.

At a Government meeting on November 11, Prime Minister of Ukraine Denys Shmyhal stated that the Cabinet of Ministers had decided to expand the water area of seaports on the Danube (Izmail, Reni and Ust-Dunaisk). According to the Prime Minister, in the last six months Ukraine managed to increase the cargo turnover of these ports from 30 thousand tons per month to 1.7 million tons. Therefore, thanks to the opening of new checkpoints and the expansion of the Danube ports, Ukraine will be able to increase exports and strengthen economic stability.

According to the statistics of the State Statistics Service, inflation in Ukraine in October grew by 2.5% compared to September, and in annual terms it rose to 26.6%.

Within the framework of the Solidarity Lanes initiative, announced by the European Union in May 2022 for the export of Ukrainian grain, $1 billion will be attracted from EU states and international partners, which will increase the export of Ukrainian grain to global markets and mitigate the global food crisis. Also, the European Commission, the Czech Republic, Poland, Romania, Slovakia, Moldova, Ukraine, the European Investment Bank, the EBRD and the World Bank signed a joint declaration to support the activities of “solidarity corridors” on the borders between Ukraine and the EU.

From November 10 to 13, the summit of Southeast Asian Nations (ASEAN) was held in the capital of Cambodia, the city of Phnom Penh. Minister for Foreign Affairs of Ukraine Dmytro Kuleba took part in the event and signed on behalf of Ukraine the Instrument of Accession to the Treaty of Amity and Cooperation in Southeast Asia. Ukraine became the first Central European country to accede to such an agreement. Acquisition of the political status of a partner in relations with ASEAN is a vital opportunity to develop cooperation with Asian countries, disseminate information about the situation in Ukraine and attract new partners to counter Russian aggression.

On the sidelines of the ASEAN Summit, the Minister for Foreign Affairs of Ukraine held a series of talks with international leaders. In particular, Dmytro Kuleba met with ASEAN Secretary General Dato Lim Jock Hoi, Foreign Ministers of India and Oman Subrahmanyam Jaishankar and Sayyid Badr Albusaidi, as well as with Foreign Minister of Vietnam Bùi Thanh Sơn, Foreign Minister of Thailand Don Pramudwinai, U.S. Secretary of State Anthony Blinken and others. During the meetings the intensification of bilateral relations between the countries, deepening of political dialogue and economic cooperation were discussed. The ways of ending the Russian war against Ukraine and strengthening global food security were also considered. Besides, Ukraine, Cambodia and Japan are working on the trilateral project on demining of Ukrainian territories.

The President of Ukraine continues to maintain an active dialogue with international partners. Volodymyr Zelenskyi had a meeting with Speaker of the Seimas of the Republic of Lithuania Viktorija Čmilytė-Nielsen, who was on a visit to Ukraine in the framework of the Parliamentary Assembly of Ukraine and Lithuania. The parties discussed the restoration of Ukrainian infrastructure facilities, cooperation on the path of European and Euro-Atlantic integration of Ukraine and enhancement of assistance. The Head of State also had phone conversations with Chancellor of Germany Olaf Scholz, Prime Minister of Canada Justin Trudeau and Prime Minister of the United Kingdom Rishi Sunak. The main topics of the talks were the continuation of the “grain initiative”, coordination of positions on the eve of the G20 summit and increasing defense support in the fight against Russia’s hostile actions.

Against the background of liberation of new territories by the Ukrainian military, international partners are increasing their support for Ukraine and providing financial, defense and humanitarian assistance. The U.S. Department of Defense announced additional military assistance to Ukraine totaling up to $400 million. The new package includes missiles for HAWK air defense systems, Avenger and Stinger anti-aircraft missile systems, additional ammunition for HIMARS, grenade launchers, artillery shells, etc. In total, under the Joe Biden administration, the United States has allocated more than $19.3 billion in military assistance to Ukraine. The Spanish government will provide Ukraine with additional Hawk air defense systems and generators to cover the country’s electricity shortage. France plans to transfer 6 more Caesar howitzers to Ukraine.

The German government has allocated an additional €1 billion from its budget for 2023 to support Ukraine in protecting against Russian cyberattacks and collecting evidence of war crimes. In turn, the Netherlands will provide Ukraine with an additional €110 million to restore critical infrastructure and stabilize energy supply. The Norwegian government will transfer about 1.5 billion Norwegian kroner (around $144 million) to the International Fund for Ukraine led by the United Kingdom.

Poland has handed over more than 1.5 thousand Starlink terminals to Ukraine, which are to be installed in specially created public WI-FI points, civil administrations in the de-occupied territories and Ukrzaliznytsia (Ukrainian Railways) facilities. In this way, the partners are trying to provide the civilian population of Ukraine with access to the Internet in the context of Russian attacks on power grids, which lead to disruptions in the work of mobile operators and Internet providers.