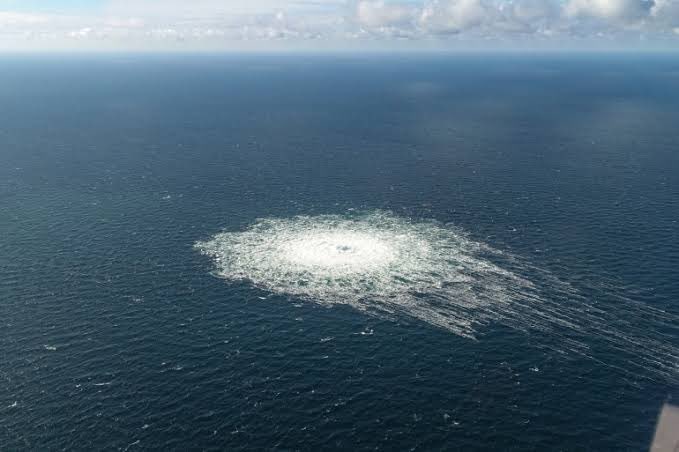 The Armed Forces of Ukraine continue successful counteroffensive operations near the administrative border of Kharkiv and Luhansk regions and in the north of Donbas. The Russian Federation’s troops conduct limited local attacks. Thus, ahead of the winter campaign, the failure of the Russian operation to reach the administrative borders of Donetsk and Luhansk regions, which had been declared the main goal of the war, becomes evident.

In the absence of military achievements, the Russian Federation is trying to raise the stakes. The Kremlin is pressuring Ukraine and its partners with nuclear blackmail and plans to annex temporarily occupied Ukrainian territories. Such actions receive harsh criticism in the international arena.

Active hostilities continue in the northern part of the Donetsk region. The Ukrainian Armed Forces are advancing in the Lyman area, posing a threat to cordon off the Russian grouping in that town. In turn, Russian troops are launching attacks on Bakhmut. In general, the intensity and scale of their actions decreased. Mobilized Russian servicemen began to appear in the area of hostilities, being thrown right into forward positions without prior training.

Intensive shelling of the Donetsk region by Russian forces persisted, leading to the destruction of civilian infrastructure and casualties among civilians. During September 26-28, at least 14 civilians were killed and 27 injured in the Donetsk region.

The AFU keep on counteroffensive operations in the Kharkiv region. In particular, on September 27, it was reported that Ukrainian troops liberated Kupiansk-Vuzlovyi, one of the largest logistics and railroad junctions in the Kharkiv region. The Ukrainian military also managed to retake a number of settlements near Kupiansk-Vuzlovyi. They gained a bridgehead on the left bank of the Oskil River, from which they can start advancing to liberate the northern part of Luhansk region.

Russian troops continue shelling Kharkiv and other populated areas of the Kharkiv region. In recent days, at least 8 people have been killed and 11 injured in Kharkiv region.

On September 27, Russian troops launched missile strikes on infrastructure in Zaporizhzhia. Oleksandr Starukh, head of the Zaporizhzhia Regional Military Administration, reports that 10 S-300 missiles were fired at the city. On the morning of September 28, three missiles hit the center of the town of Huliaipole in the Zaporizhzhia region.

The Ukrainian Armed Forces are striking at areas of concentration of Russian manpower and equipment in the southern direction.

The Russian military are attacking civilian infrastructure. They carried out several massive strikes in Mykolaiv. Russian troops also shelled the town of Ochakiv in the Mykolaiv region.

Missile strikes continue in Kryvyi Rih. As a result, the infrastructure of the local airport was destroyed.

Apart from the use of UAVs, the Russian military is also attempting to launch strikes in Odesa and Dnipropetrovsk regions. On the night of September 29, a missile strike was launched against residential areas of Dnipro, killing at least 3 people and injuring 5. Strikes continue against areas in the Dnipropetrovsk region near the front line. The Nikopol district, as well as Kryvyi Rih, still suffer the most intense strikes by Russian troops.

Russian troops carry on shelling the border areas of Sumy and Chernihiv regions.

The press service of the Main Directorate of Intelligence of the Ministry of Defense of Ukraine reports that Russia plans to carry out massive cyber attacks on critical infrastructure facilities in Ukraine and its partners, particularly in the energy sector.

The Office of the UN High Commissioner for Human Rights has updated data on civilian casualties resulting from Russia’s full-scale invasion of Ukraine. As of September 26, the confirmed casualties are 14,844 (5,996 dead, 8,848 wounded). According to the Office of the Prosecutor General, as of the morning of September 28, as a result of the armed aggression of the Russian Federation in Ukraine, the number of affected children increased to 1,172 (395 children killed, 777 wounded). According to the government platform Children of War, as of September 28, 7,833 children had been deported and 241 were missing.

Ukrainian officials report numerous violations and cases of pressure on civilians by Russian troops during so-called “referenda” in Ukraine’s temporarily occupied territories. According to Ivan Fedorov, mayor of temporarily occupied Melitopol, only 0.5% of residents of the occupied Zaporizhzhia region participated in the Russian pseudo-referendum. Deputy Prime Minister for the Reintegration of the Temporarily Occupied Territories Iryna Vereshchuk stated that according to intelligence, local residents en masse refuse to cooperate with the Russians. In response, they were subjected to the use of force: women were threatened with having their children taken away if they did not take part in the pseudo-referendum, and men were prevented from leaving the occupied territories.

Ukrainian law enforcement authorities continue to investigate crimes committed by the Russian army on the territory of the Kyiv region. Ukrainian investigators used video camera footage to establish that Russian soldiers shot civilian cars along roads near Hostomel during the first days of the full-scale invasion. The investigation resulted in the identification of Rosgvardiya fighters from Krasnoyarsk Krai responsible for the killing of 11 civilians and wounding of 15 others.

The investigation into the illegal activities of Russian troops in the territories that were recently liberated by the AFU as a result of a successful counterattack is underway. A spokesperson for the Ministry of Internal Affairs, Aliona Matvieieva, indicated that since September 23, investigators have documented more than 582 war crimes committed by the Russian military on the territories of Kharkiv region during the occupation.

Dmytro Lubinets, the Verkhovna Rada Commissioner for Human Rights, spoke about the cruel treatment and abuse of Ukrainian prisoners by the Russian military. Olha Kravchenko, head of the department for work with prisoners and their families of the Azov Patronage Service, reported that about 800 Azov POWs remain in Russian captivity, including more than 40 women, among them pregnant ones.

The Russian military is tightening filtration measures in Kherson region. In particular, heavy attention is being paid to checking the cell phones of local residents. Cases of kidnapping also continue.

In temporarily occupied Mariupol, men receive messages asking them to come to the military registration and enlistment office. The City Council reported that covert mobilization has been going on for several weeks. In particular, Mariupol residents received phone messages inviting them to work in the so-called “state paramilitary service”. The mayor of Mariupol, Vadym Boichenko, claimed that the occupation administration may conscript more than 10,000 people into the Russian army in the city.

The UN Office for Human Rights published its 34th report on the human rights situation in Ukraine. The head of the mission, Matilda Bogner, stated that human rights violations affected both civilians and combatants and included willful killings, arbitrary detentions and enforced disappearances, torture and ill-treatment, as well as conflict-related sexual violence.

Russia’s Gazprom declared that it may impose sanctions against Naftogaz of Ukraine because of the Ukrainian company’s lawsuit in an arbitration for nonpayment for the transit of Russian gas to Europe. This will mean a ban for Gazprom to fulfill its obligations under the agreements made and a full stop of Russian gas transit through Ukraine. This statement by Gazprom was made after the explosions on the Nord Stream 1 and Nord Stream 2 gas pipelines in the Baltic Sea. Thus, the only transit route for Russian gas to Europe may remain only the Turkish Stream.

According to the OECD calculations, the Russian invasion of Ukraine will cost the world economy $2.8 trillion in production losses by the end of 2022. The amount could increase if a harsh winter leads to rationing of energy resources in Europe. The escalating war has led to disrupted supply chains, shortages of food and other goods, and instability in financial markets around the world.

The EBRD predicts that Ukraine’s economy will shrink by 30 percent in 2022 because of the war. The forecast for 2023 has been revised downward – instead of 25% growth, only 8% is now projected.

The U.S. Senate supported temporary funding of more than $12 billion in new aid to Ukraine following a request from the Joseph Biden administration. Such aid to Ukraine will be provided from Oct. 1 through the end of the 2022 calendar year.

The international community continues to respond to Russia’s holding of sham “referenda” in Ukraine’s temporarily occupied territories. On September 27, the UN Security Council held a meeting on this issue. Ukrainian President Volodymyr Zelenskyi addressed the meeting via video message, calling on the world to take decisive steps to stop Russia’s nuclear blackmail, its genocide in Ukraine, and attempts to annex the temporarily occupied territories.

Volodymyr Zelenskyi met with French Foreign Minister Catherine Colonna, who was on a visit to Kyiv. The president briefed the minister on the situation at the front. The sides also discussed an increase in military support, the strengthening of sanctions on Russia and the investigation of Russian military crimes. For her part, Catherine Colonna assured that France would continue to support Ukraine’s territorial integrity and would never recognize the pseudo-referenda organized by Russia in the temporarily occupied territories.

Ukrainian President Volodymyr Zelenskyi had a telephone conversation with NATO Secretary General Jens Stoltenberg. The parties discussed the current situation on the front and further support of Ukraine by the member states of the Alliance. This week the President of Ukraine also spoke about non-recognition of pseudo-referenda with German Chancellor Olaf Scholz, British Prime Minister Liz Truss, and Canadian Prime Minister Justin Trudeau. In addition, Zelenskyi held talks with UN Secretary General António Guterres and Turkish President Recep Tayyip Erdogan on nuclear safety in the context of the situation at the Zaporizhzhia nuclear power plant.

European Union High Representative for Foreign Affairs and Security Policy Josep Borrell has condemned the holding of illegal “referenda” in the occupied territories of Ukraine and the falsification of their results. Additionally, members of the lower house of the Canadian parliament unanimously condemned the “pseudo-referenda” organized by the Russian occupation forces in Ukraine. They declared that they would never recognize their legitimacy. The MEPs also issued a joint statement noting that Russia’s attempt to legitimize the occupation and annexation of the territories of Luhansk, Donetsk, Zaporizhzhia and Kherson regions was a dangerous escalation of the war.

The United States announced a new $1.1 billion military aid package for Ukraine. The money will be used to strengthen the capabilities of the Ukrainian Armed Forces in the medium and long term through the purchase of new equipment. In particular, the package provides for additional 18 HIMARS systems, 150 multi-purpose armored vehicles, 150 tactical vehicles for towing artillery and other equipment. In addition, Germany announced that as part of its military assistance, it will transfer four IRIS-T air defense systems, 10 Bridge Systems and heavy duty trailer trucks to Ukraine.

In response to the sham referenda organized by Russia in the occupied territories of four regions of Ukraine in violation of international law, the world continues to put economic pressure on Russia. The first sanctions against Russia for holding the so-called referenda were imposed by the United Kingdom. The new sanctions apply to Russian officials whom the Kremlin sent to the occupied territories to conduct illegal voting. The European Commission has proposed an eighth sanctions package, which would strengthen the fight against sanctions circumvention, form a legal basis for limiting Russian oil prices and new restrictions on trade. The new sanctions package must now be agreed upon by member states in the EU Council. In addition, the EU will expand the geographic scope of sanctions applied in relation to occupied Crimea to all temporarily uncontrolled territories of Ukraine. In particular, this includes a ban on imports into the EU of products originating from Crimea or Sevastopol. Canada also joined the imposition of new sanctions.