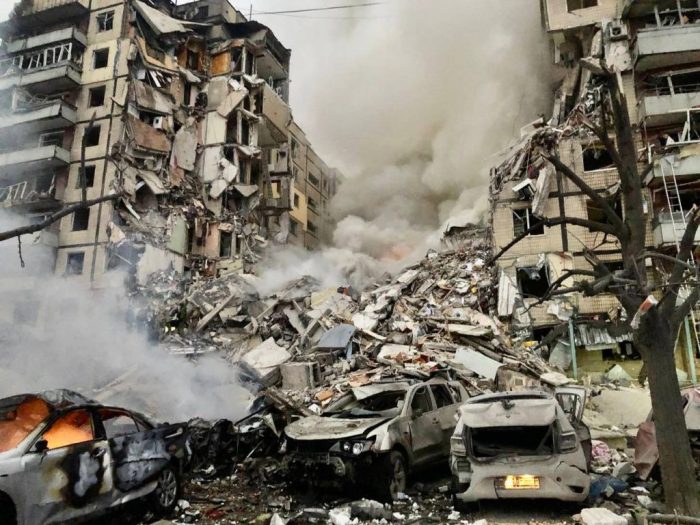 On January 14, Russian troops carried out several missile attacks against Ukraine’s critical infrastructure. One of the missiles hit a multi-storey building in Dnipro, completely destroying two entrances of the building. As a result, according to preliminary data, 45 people were killed (including 6 children), 79 people (including 16 children) were injured. Several dozen people are still missing.

As a result of the attack, energy network facilities in Kharkiv, Lviv, Ivano-Frankivsk, Zaporizhzhia, Vinnytsia and Kyiv regions were damaged. There was also a missile attack on Kyiv using S-400 (S-300) anti-aircraft guided missiles, which Ukrainian air defense is currently unable to intercept.

On the frontline, the fiercest fighting continues at the Bakhmut direction in Donetsk region, where Russian troops managed to capture the small town of Soledar as a result of assault actions and street fighting. However, this did not lead to a breakthrough of the front line. Ukrainian Armed Forces are holding the defense on the western outskirts of this town. Positional fighting is going on in other parts of the frontline. In Luhansk region Ukrainian troops are gradually advancing towards Kreminna.

During the week Russian troops kept striking at civilian infrastructure of the border and frontline regions of Ukraine. As a result, at least 12 civilians were killed in Donetsk region, 23 people were wounded. In Kherson region the losses of local population amounted to 4 killed and 19 wounded. In Kharkiv region 4 people were killed and 12 local residents were wounded during this period. Shelling of the frontline territories of Zaporizhzhia region continues. On the night of January 16, several local residents were wounded in Zaporizhzhia city as a result of a rocket attack.

On January 11, personnel changes were made in the structure of the Russian command. From now on, the Russian aggression against Ukraine is led directly by the Chief of the General Staff of the Russian Federation Valery Gerasimov. The appointment is intended to demonstrate Moscow’s readiness to expand the scale of aggression.

According to the Office of the Prosecutor General, as of January 14, the number of children in Ukraine affected by the full-scale invasion of the Russian Federation rose to 1333 (453 children were killed, 880 were injured).

International non-governmental organization Human Rights Watch released its annual report on the state of human rights in the world. It notes the catastrophic consequences of Russia’s armed invasion of Ukraine for the population, civilian objects and infrastructure. This includes the Russian army’s indiscriminate and disproportionate shelling (in particular, of hospitals, schools, humanitarian convoys); the use of cluster munitions and anti-personnel mines; destruction of energy infrastructure; war crimes and crimes against humanity in the occupied territories (torture, enforced deprivation of liberty, sexual violence, forced displacement, violation of the rights of prisoners of war, etc.)

On January 11–13, negotiations between the Ombudsmen of Ukraine and the Russian Federation were held in Türkiye. The main attention was paid to accelerating the return of Ukrainian prisoners of war and the release of civilian hostages detained by the Russian side in the occupied Crimea, parts of Donetsk and Luhansk regions, as well as in other temporarily occupied territories of Ukraine, including those occupied since February 24, 2022.

V. Zelenskyi stripped Ukrainian citizenship from four MPs accused of high treason and cooperation with Russia to the detriment of Ukraine’s interests—Viktor Medvedchuk, Taras Kozak, Andrii Derkach and Renat Kuzmin. On January 13, the Verkhovna Rada of Ukraine prematurely terminated their powers as parliamentarians. On January 15, Zelenskyi enacted the National Security and Defense Council’s decision to impose personal sanctions on 198 people, including cultural figures and propagandists from Russia and Ukraine.

As reported by the State Statistics Service, inflation in Ukraine was 26.6% in 2022. At the same time, core inflation in December compared to November 2022 was 0.8%.

According to the Minister of Environmental Protection and Natural Resources of Ukraine R. Strilets, the amount of damage to Ukraine’s environment from Russia’s armed aggression amounted to more than $46 billion. The damages include massive air and soil pollution, burning of at least 23.3 thousand hectares of forests, combustion of more than 680 thousand tons of oil and fuel as a result of shelling of Ukrainian energy facilities by the Russian army, etc.

On January 11, a high-level meeting of the Lublin Triangle was held in Lviv. President of Ukraine Volodymyr Zelenskyi met with President of Poland Andrzej Duda and President of Lithuania Gitanas Nausėda. The leaders discussed security and defense issues and support for Ukraine’s accession to NATO. As a result, a joint declaration was adopted, which, inter alia, provides for the support of the Peace Formula Summit and the establishment of a special international tribunal to hold Russia accountable for the war.

International partners continue to pay visits to Ukraine under the war conditions. The Head of State held negotiations with Executive Vice President of the European Commission for the European Green Deal Frans Timmermans and Speaker of the Latvian Parliament Edvards Smiltēns who were on a visit to Kyiv. German Foreign Minister Annalena Baerbock visited Kharkiv on January 10.

Since the beginning of the full-scale invasion, international partners for the first time decided to transfer offensive weapons—battle tanks—to the Ukrainian Armed Forces. The United Kingdom will provide Ukraine with Challenger 2 heavy armored tanks and AS-90 self-propelled howitzers. Poland is ready to transfer to Ukraine a company of German Leopard 2 heavy tanks within the international coalition. Modern heavy weapons will considerably increase the counter-offensive capabilities of the Armed Forces of Ukraine.

Besides, Canada will provide Ukraine with the NASAMS air defense system, which will be purchased in the U.S. Lithuania and Germany announced the provision of military assistance.  Humanitarian and financial assistance will be provided by Azerbaijan, Norway, Germany and Finland.