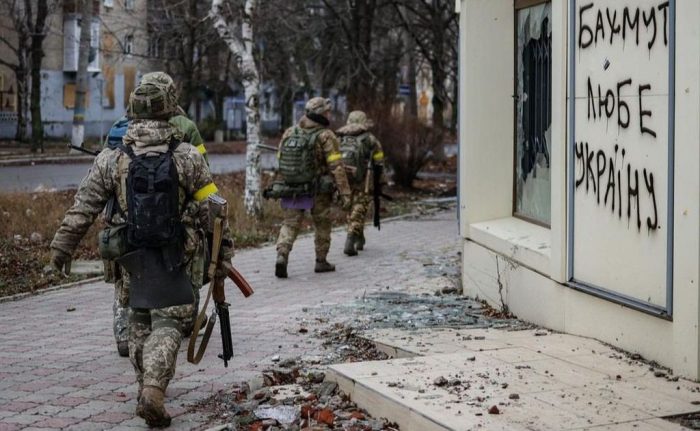 Positional fighting is ongoing on the front line. The Russian leadership declared a ceasefire for the Christmas holidays (January 6-7). However, the statement was purely propaganda. It did not stop Russian troops from further shelling and offensive operations.

Bakhmut direction in Donetsk region remains the hottest area of the frontline. Russian command is currently trying to encircle Bakhmut from several directions. Active fighting is taking place north of the city, where Russian troops have made progress and advanced to the town of Soledar. However, they failed to break through the defense of the Ukrainian Armed Forces—Ukrainian troops hold their positions in this settlement.

Simultaneously, combat continues in the Donetsk region, where Russian troops are attacking near Avdiivka and Marinka. In the Luhansk region, near Svatove and Kreminna, both sides are launching local attacks and counterattacks in an attempt to improve their positions. In the Kherson and Zaporizhzhia sectors, hostilities are mainly limited to artillery attacks.

The Ukrainian Armed Forces keep carrying out precision strikes on the locations and rear infrastructure of the Russian troops. The General Staff of the Armed Forces of Ukraine reports about effective destruction of targets in Zaporizhzhia (particularly in Melitopol) and Kherson regions. There is also information about the destruction of Russian facilities in Luhansk region. Increasingly, the targets of shelling are the places of deployment of Russian mobilized soldiers, who are being sent in large numbers to the front line by the command.

Russian troops strike at civilian infrastructure near the frontline and border regions of Ukraine. As a result of shelling on the territory of Donetsk region at least 10 civilians were killed and 29 people were wounded in the last week. According to preliminary data 11 people were killed and 29 wounded in the liberated territories of Kherson region. In Kharkiv region casualties among the civilian population, caused by the Russian shelling during the week, amounted to at least 1 person killed and 3 wounded. In addition, 1 sapper was killed and his colleague and a local resident were injured as a result of a mine explosion.

According to the Prosecutor General’s Office, as of the morning of January 6, the number of children in Ukraine affected by the full-scale invasion of the Russian Federation increased to 1330 (453 children were killed, 877 were injured).

On January 5, it was announced that UN Secretary-General Antonio Guterres had disbanded the fact-finding mission on the strike on the colony in occupied Olenivka, which killed dozens of Ukrainian prisoners of war in July 2022. Officially, the reason for such a decision was “the lack of conditions necessary for the deployment of the mission on the ground.” Russia refuses to provide international organizations with direct access to crime scenes in the occupied territories.

On January 8, the first prisoner exchange in 2023 was held, as a result of which 50 Ukrainian servicemen (33 officers, 17 privates and sergeants) were released.

According to the Prime Minister of Ukraine Denys Shmyhal, as a result of the armed invasion of the Russian Federation, 250 thousand square kilometers of the territory of Ukraine are currently mined, which is the largest minefield in the world (larger than the area of the United Kingdom or Romania).

Under the Grain Deal, since August 2022, Ukraine has shipped 626 vessels that exported 16.8 million tons of Ukrainian food to Asia, Europe and Africa. The operation of the initiative is complicated by long-term inspections of ships conducted by the Russian Federation in the Bosporus Strait, limiting the export of Ukrainian agricultural products to world markets.

On January 7, 2023, a historic Christmas service was held in the Assumption Cathedral of the Kyiv-Pechersk Lavra, which for the first time was held by the Orthodox Church of Ukraine, not the UOC of the Moscow Patriarchate. Previously, the main cathedral of the monastery was rented by the UOC (MP), which continues to be subordinate to the Russian Orthodox Church (ROC). The ROC under the leadership of Patriarch Kirill of Moscow actually supported the Russian invasion of Ukraine. In May 2022, the UOC (MP), as a sign of disagreement with the position of Patriarch Kirill of the Russian Orthodox Church, declared its independence and separation from the Moscow Patriarchate, but in a purely formal manner. Liturgical communion between the UOC (MP) and the ROC has been preserved.

Against the backdrop of forecasts of a significant military escalation in late January-February, which is explained by favorable weather conditions (ground freezing) and mobilization in the Russian Federation, the allies strengthen Ukraine’s defense capabilities, in particular by providing heavy weapons.  The United States will provide a new package of support to Ukraine in the defense sphere worth more than $3 billion, including Bradley infantry fighting vehicles with TOW anti-tank missiles, M113 armored personnel carriers, MRAP and HMMWV vehicles with mine protection, additional ammunition for HIMARS, RIM-7 Sea Sparrow missiles and other equipment. In turn, France for the first time approved the supply of AMX-10RC infantry fire support vehicles to Ukraine. Following the United States, Germany announced the transfer of the Patriot air defense system, which will also transfer Marder infantry fighting vehicles, various military equipment and ammunition. Finland and Norway also agreed to send military assistance.

January 6 President of Ukraine Volodymyr Zelenskyi met with Chairman of the U.S. Senate Committee on Armed Services Jack Reed and Ranking Member of this Committee Senator Angus King, who paid a visit to Kyiv.  The purpose of the senators’ visit was to verify the accountability of funds and equipment provided by the U.S. to Ukraine, which is an important element of domestic political rhetoric in the United States. The Chairman of the U.S. Senate Armed Services Committee noted the high level of audit of the use of U.S. military assistance.