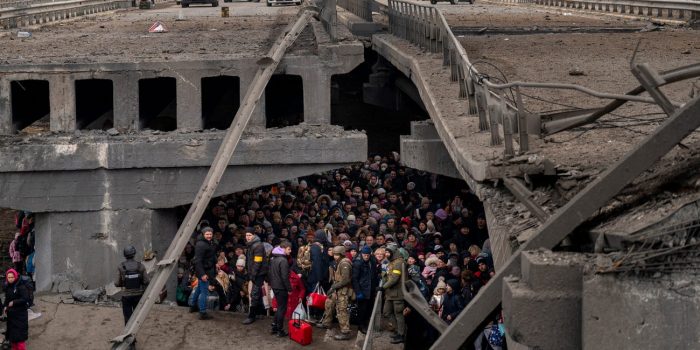 As of 8:00 a.m. on March 7, 2022, there is no complete official information about the number of civilian casualties.

According to the Office of the UN High Commissioner for Human Rights, the deaths and injuries of civilians were caused by military shelling with a wide range of damage – rocket and air strikes, heavy artillery and multiple rocket launchers.

According to the Office of the UN High Commissioner for Human Rights, as of the morning of March 5, 2022, 351 civilians had been killed since the start of the full-scale Russian aggression, including 71 dead, 41 women, 8 boys and 4 girls, and 10 children and 217 of whom are unknown. 707 civilians were wounded. The wounded include 58 men, 40 women, 11 girls and 2 boys, as well as 23 children and 573 adults whose gender is unknown.

According to the official information of the Ukrainian Parliament Commissioner for Human Rights, as of 12:00 on March 6, 38 children were killed and 71 wounded as a result of Russian aggression. In Mariupol, a 1.5-year-old boy was killed. In Bucha (Kyiv region), two wounded children died due to military actions and inability of Ukrainian doctors to provide them with necessary medical care. In total, there are about 70 children in various shelters in Bucha, Hostomel and Irpin. Russian troops do not allow Ukrainian doctors and volunteers to see them.

In the Ukrainian-controlled territories of Donetsk and Luhansk regions, as of March 5, 63 people were killed and 292 civilians were wounded.

In the non-controlled territories of Donetsk and Luhansk regions, 23 civilians were killed and 93 wounded as of March 5.

These data are incomplete, as it is impossible to ascertain the exact number of civilian adults and children injured in most areas. The Ukrainian authorities and law enforcement agencies do not have proper access to the sites of hostilities.

According to the latest data as of 8:00 a.m. on March 7, the largest number of civilian casualties since the start of the conflict has been recorded in Kharkiv region. 194 people were killed and 312 were wounded. Five children were among the dead. The number of victims among foreign students is unknown. A total of 12,000 foreign students are studying in Kharkiv.

According to the official information of the Ministry of Education and Science of Ukraine, 211 schools were destroyed as of March 6.

According to the Ukrainian Ministry of Health, 34 hospitals were put out of operation as of March 6. The World Health Organization recorded that six Ukrainian doctors were killed and 11 injured by Russian shelling.

Civilian casualties on March 6, 2022 are the following: 18 people were killed, including 3 children; 23 people were wounded, including 2 children. This is not complete information, as dozens of Ukrainian towns are under the control of Russian troops or are heavily engaged in hostilities, making it impossible to ascertain the exact number of casualties.

In Hostomel and Bucha, local residents remain hostages of the Russian troops. People (including children) are deprived of the necessary means of subsistence – heat, food, water, and medicine. In addition, there are facts of cruel treatment of people by Russian invaders – rape of women.

Losses for certain towns/regions of Ukraine:

Donetsk region – 1 person died, 8 were injured. In Staromlynivka (Donetsk region) – 2 civilians were injured. However, there is no exact information about the victims in Mariupol, Volnovakha, Kramatorsk, Toretsk, Verkhnotoretsk, as active hostilities continue.

Bucha (Kyiv region) – 4 people died. They were volunteers who were carrying food for homeless animals. In addition, the Russian military is preventing the Ukrainian authorities from evacuating the residents of Bucha and providing necessary humanitarian aid there. In Hostomel (a town near Bucha), local residents are blocked by harsh military action. They ask for help, but Russian soldiers do not allow them to be evacuated.

Novopskov (Luhansk region) – 3 people were injured. Locals went on a peaceful protest against the capture of the city by Russian troops. Russian occupiers opened fire on protesters.

Chernihiv region – 1 person was killed and 2 were injured. 141 settlements remain without electricity.

Irpin (Kyiv region) – Russian troops fired on civilians during the evacuation – 4 civilians, including 1 child, were killed.

Nova Kakhovka (Kherson region) – 5 civilians wounded by the Russian military during peaceful rallies against the occupation.