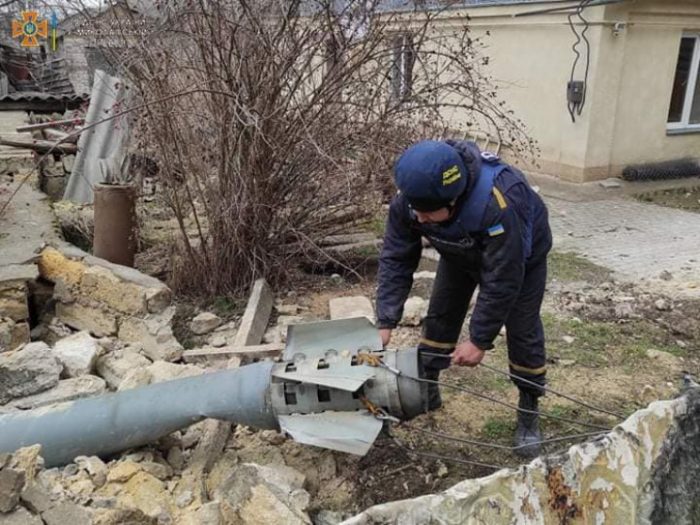 Total combat losses of Russian troops from 24.02 to 06.03 were estimated at over 11 thousand people, over 280 tanks, 1,270 armored vehicles and over 90 aircraft (planes and helicopters). The Russian Armed Forces kept attacking, in spite of significant losses in personnel and equipment. The supply of fuel and other materiel continued from the territory of the Republic of Belarus through the Chornobyl Exclusion Zone.

Aggressors violated the rules of the International Humanitarian Law by:

The most dangerous directions remained the Zhytomyr highway, Bucha-Irpin-Hostomel, Makariv, and the north of the Vyshhorod district. Russian troops were attempting to advance to the eastern outskirts of Kyiv through the Brovarsky and Boryspil districts.

The operation to defend Chernihiv continued. Fighting was ongoing in Sumy region. A stabilization operation was underway in other directions. Russian forces suffered significant losses in the areas of Nova Basan and Skrypali, and were redeploying additional forces to replenish manpower and equipment.

The Russian army attempted to attack Mykolaiv and advance toward the South Ukraine nuclear power plant. Firing of enemy multiple rocket launchers into the city led to fires in residential buildings. The Ukrainian Armed Forces successfully repulsed the Russian offensive, destroyed an artillery crew, and took an artillery battery consisting of D-30 howitzers for the needs of the Ukrainian army.

Russian units advanced in a northeastern direction along the Inhul River and occupied the village of Kashpero-Mykolayivka.

Russian troops launched a missile strike from the sea near the village of Tuzla in Bilhorod-Dnistrovskyi district (Odesa Region). The strike targeted critical infrastructure facilities.

The Russian aggressor fired Grad multiple rocket launchers at the territory of the National Scientific Center “Kharkiv Institute of Physics and Technology” (NSC KIPT). The NSC KIPT is home to the “Neutron Source” nuclear research facility, which has 37 nuclear fuel elements loaded into its core. The destruction of the nuclear facility and nuclear material storage facilities could have led to a large-scale environmental catastrophe.

Fighting continued near Izyum, which is an important strategic point with access to the north of Donetsk and Luhansk regions. It opens up a direct attack on the rear of a group of Ukrainian troops located in the area of the Joint Force Operation (JFO). On March 6, there was also fire in the town of Balakliya.

Due to repeated shelling of the television tower in Kharkiv, the region was temporarily left without television and radio broadcasts. It should be recalled that the first attempt to destroy the TV tower was on March 2.

In the course of combat operations by the Armed Forces of Ukraine, the town of Chuhuiv was liberated. The Russian military suffered significant losses in personnel and equipment in the process.

Vinnytsia International Airport was completely destroyed by 8 Russian X-101 missiles, which have a long range of 5,500 km. According to preliminary data, they were fired from the waters of the Black Sea. It is worth noting that the airport in Vinnytsia is used by both civilians and the military. The runway of the airfield has been under reconstruction for a long time, so there were no aviation equipment on the airfield.

The Russian side continued to carry out mass DDoS attacks on Ukrainian resources. Since February 15, Ukraine has been exposed to about 2,800 such attacks. The daily record was 271.

The adversary has activated an extensive network of bots in social networks, trying to spread panic among the Ukrainian population. Messages such as “Everything is lost!”, “Help Kyiv!” (Kherson, Chernihiv, etc., depending on the operational situation); “We have all been abandoned!” and similar ones were disseminated. In particular, the messages were sent out from newly created “patriotic” accounts with Ukrainian symbols in Ukrainian and Russian.

Because of the repeated shelling of the television tower in Kharkiv, the region was temporarily left without television and radio broadcasts. Technical premises were destroyed. The authorities urged residents of Kharkiv and the region to use alternative channels to obtain objective information if they have the opportunity to do so.

The morning of March 6 began with demonstrations of many thousands in Nova Kakhovka, Kalanchak, Henichesk, Novooleksiyivka in the Kherson region, as well as in the city of Kherson itself. The civilians came out with Ukrainian symbols and chanted “Ukraine” and “Go Home,” thus showing the Russian troops, temporarily occupying population areas, that no one was waiting for them. During the protest in Nova Kakhovka, Russian troops opened fire on civilians.

In Melitopol, the local population also held a protest of many thousands against the occupation of the city and in support of Ukraine.

On the border with the Autonomous Republic of Crimea in Chonhar, Crimean Tatars came out for a rally demanding the de-occupation of Crimea.

The aggressors continue to kill civilians and destroy civilian infrastructure. On March 6, 38 children were killed and 71 children were injured. Hundreds of thousands of Ukrainians have been under siege for a week in settlements in Sumy, Chernihiv, Kharkiv, Kyiv, Mykolaiv, Zaporizhia, Kherson, Luhansk and Donetsk regions, and need humanitarian corridors. So far, humanitarian corridors from Mariupol and Volnovakha have been agreed and then disrupted by the Russian side. They include the evacuation of more than 200,000 people. During the 11 days of the war, the evacuation was only partially carried out in Volnovakha. The aggressors are shelling residential areas of cities. There is no heat, communication and light. Residents of blockaded settlements need food and water.

Due to the damage caused by hostilities, more than 956 settlements (more than 646 thousand consumers) remain without electricity (in whole or in part);  about 130,000 consumers were left without gas supply.

The aggressors are attacking civilian and critical infrastructure. In Kyiv, a Russian cruise missile was shot down over the Okhmatdyt Children’s Hospital. As a result of the attack by the Russian military, 211 Ukrainian schools were destroyed or damaged.

The UN High Commissioner for Refugees said more than 1.5 million people had been forced to leave Ukraine for neighboring countries to escape Russia’s war.

Ukrainian diplomacy is making significant efforts and negotiating with all international organizations and states on financial, military-technical and humanitarian assistance.

The Prime Minister of the United Kingdom Boris Johnson has stated to the President of Ukraine Volodymyr Zelensky that he will work with international allies to further provide Ukraine with defense weapons.

French President Emmanuel Macron has called on Russian President Vladimir Putin to end hostilities in Ukraine and ensure the protection and security of Ukraine’s nuclear facilities.

Ukraine calls on the world to further strengthen sanctions against Moscow, in particular by imposing an oil embargo, in connection with Russia’s use of tactics to inflict maximum damage on civilians. U.S. Secretary of State Anthony Blinken said the United States is working with its allies in Europe to study a ban on Russian oil imports.

The European Peace Facility has mobilized € 500 million – € 450 million for lethal weapons and € 50 million for non-lethal aid. Emergency humanitarian aid will be used to cover the costs of member states that have faced the mass influx of refugees from Ukraine.  Also on March 6, the European Investment Bank decided to transfer 639 million euros from other projects to the state budget of Ukraine.

According to the Ministry of Foreign Affairs, almost 20,000 foreigners from 52 countries enlisted in the Foreign Legion for the Defense of Ukraine.

– The social network TikTok announced a temporary suspension of work in Russia after the adoption of the law on liability for fakes about the Russian army.

– The Asian Infrastructure Investment Bank has suspended all projects related to Russia and Belarus in connection with Russia’s aggression against Ukraine.

– The French radio company Radio France stops the work of its journalists in Russia.

– The Polish Investment Agency has stopped cooperating with Russian investors.

– Austrian oil company OMV has refused to invest in Russia.

– The Organizing Committee of the World Games in Birmingham 2022 has banned Russian and Belarusian athletes and officials from participating in the competition.

– The Chilean government has withdrawn invitations sent to Russian companies to participate in the Fidae 2022 aerospace arms and military equipment exhibition (April 5-10).

– Russia and Belarus have been expelled from the International Union of Railways.

– UEFA has decided not to appoint Russian referees for matches of tournaments held under the auspices of the organization.

– Italian fashion house Prada has suspended sales in Russia because of its armed aggression against Ukraine.

– American Express Financial Services Corporation is suspending all operations in Russia and Belarus due to the invasion of Ukraine.

– American PVH Corp., which owns brands Tommy Hilfiger, Calvin Klein, Warner’s and others, has decided to temporarily close its stores and suspend all commercial operations in Russia and Belarus.

– Spotify has suspended the sale of Premium subscriptions in Russia due to its withdrawal.

– Netflix is ​​shutting down in Russia.