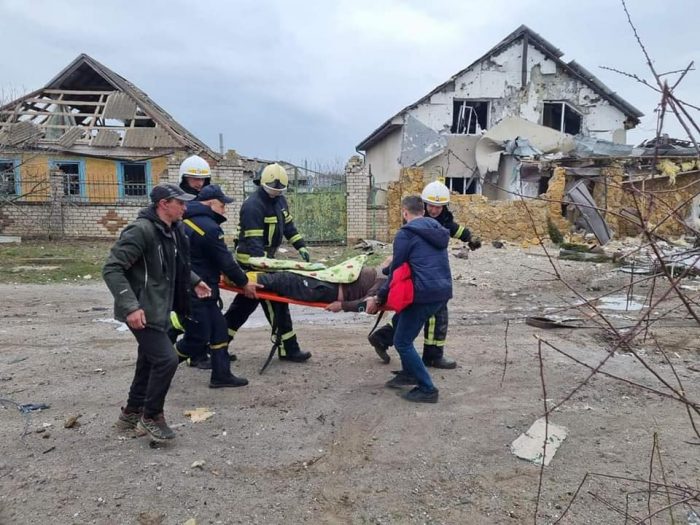 As of 8:00 a.m. on March 9, 2022, according to incomplete information, 38 civilians, including 4 children, have died in various Ukrainian cities. In Mariupol, a 6-year-old girl died of dehydration. 31 people were wounded, including one child.

Crimes of the Russian army against humanity:

– There is information about the use of torture by the Russian military against employees of the Zaporizhzhia nuclear power plant. The personnel are in an exhausted psychological and physical state.

– In the Kyiv region, the Russian military are holding foreign journalists captive. They are known to be British. One of them is wounded. 1 Swiss journalist was wounded and robbed in Mykolaiv region.

– The Kharkiv region suffered great human losses – a total of 170 civilians, including 5 children, have been killed in the region since the start of the conflict as of 18:00 on March 8, according to official data from the Kharkiv national police. In Kharkiv itself, 30 schools, 27 kindergartens, 5 universities and orphanages were shelled.

– Airstrikes were carried out on the Red Cross office in Mariupol. The office warehouses were supposed to receive humanitarian aid for civilians in the city.

Sumy – the number of civilian casualties caused by the airstrikes on the city on March 7 became known. 22 people were killed, including 3 children. 8 were wounded, including one child. The air strikes were carried out on private houses, and as a result 7 houses were completely destroyed. About 20 houses were partially destroyed.

Okhtyrka (Sumy region) – 1 person was killed and 14 wounded as a result of air strikes on March 7. These data are not final, and the search for victims continues.

Mariupol (Donetsk region) – 4 people were killed, including 1 child. A 6-year-old girl died of dehydration. The overall situation in the city itself is still unclear, as the Russian military does not allow humanitarian missions to enter Mariupol and provide assistance to local residents, who have been without light, heating, food, medicine and water for over a week.

Mykolaiv region – Russian military shot up a minibus that was taking orphanage teachers to work. As a result of direct fire, 3 female teachers were killed and the other 2 were wounded. The minibus carrying the staff of the orphanage had a sign of the Red Cross humanitarian organization.

Kharkiv – 2 people were killed by mortars and small arms – they were employees of Ecopark Zoo who were trying to feed animals that had not eaten for several days. The Russian military shot the workers while they were nursing the zoo animals.

Makariv (Kyiv region) – Russian military shot up a private car with a “disabled person behind the wheel” sign. 2 elderly people, a man and a woman, were killed as a result of the shelling.

Rubizhne (Luhansk region) – 1 person was killed and 3 were wounded as a result of shelling a residential building.

Chernihiv – 3 people were killed as a result of an air strike.