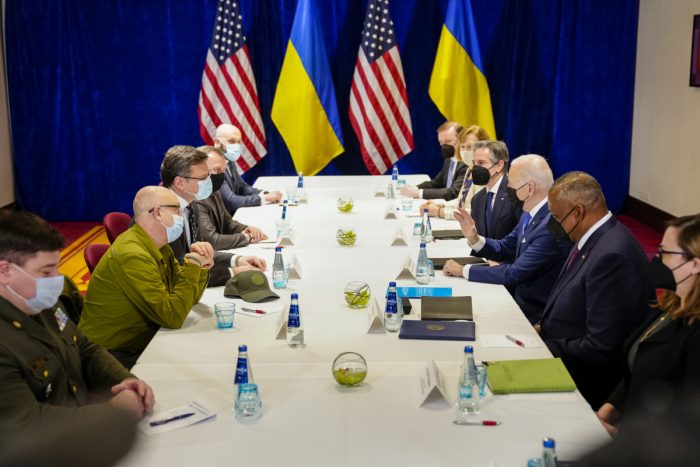 Russian troops entered the town of Slavutych and occupied the city hospital building. The town of Boiarka was shelled. The Kyiv Regional Prosecutor’s Office reports that according to preliminary information, 4 people were wounded, including a minor child. Among the damaged infrastructure were high-rise and private residential buildings, garages and other real estate.

Dmytro Zhyvytskyi, head of the Sumy Regional State Administration, reported that the town of Trostianets in the Sumy Region had been liberated from Russian troops.

According to the State Nuclear Regulatory Inspectorate of Ukraine, the nuclear facility “Neutron Source” in Kharkiv was again hit by Russian shelling.

OlehSyniehubov, head of the Kharkiv Regional Military Administration, informs that the Armed Forces of Ukraine are going on a counteroffensive in the direction of Mala Rohan. In addition, according to Syniehubov, Russian troops are trying to break through Izium in order to encircle the Ukrainian units operating in the area of the Joint Forces Operation.

The head of the Luhansk Regional Military Administration, Serhii Haidai, indicated that Russian troops launched a missile strike and shelled Lysychansk and Sievierodonetsk with MLRS. As a result of the shelling, the mine was de-energized and workers were left underground. 3 high-rise buildings and 8 private houses were damaged by Russian fire. A school in a village near Lysychansk, the infrastructure of an ambulance station in Sievierodonetsk, and two wholesale warehouses in the city were also hit by shelling; 2 people were wounded.

Zaporizhzhia Regional Military Administration reports that Russian troops blocked the movement of an evacuation convoy near the town of Vasylivka. Only in the evening, more than 300 cars and more than 80 buses were able to reach Zaporizhzhia.

According to information available to the Zaporizhzhia Regional Military Administration, Russian troops may be preparing to hold a “pseudo-referendum” in the region’s occupied territories. It is reported that in temporarily occupied Melitopol, the Russians promise to pay local pensioners an allowance of 10,000 rubles. However, the personal data collected for this purpose can be used to create a picture of the “people’s will”.

On the evening of March 26, missile strikes were launched against Lviv. The head of the Lviv Regional Military Administration, Maksym Kozytskyi, indicates that two missiles each hit an oil depot and a defense industry plant, injuring 5 people.

The Volyn Regional Military Administration reports the interception over the region of Russian missiles fired at the territory of Ukraine from aircraft in Belarusian airspace.

The head of the Rivne Regional Military Administration Vitalii Koval said that Russian troops had launched a missile strike on an oil depot in the town of Dubno.

On March 26, 10 agreed humanitarian corridors went functional. A total of 5,208 people were evacuated during the day.

The Office of the Prosecutor General disclosed that during the 31 days of war in Ukraine, 136 children were killed. 199 children were injured with varying degrees of severity.

Oleksandr Kamyshyn, Chairman of the Board of JSC Ukrzaliznytsia, announced the deaths of 54 employees of this company since the beginning of active hostilities. He added that as of today 64 railway workers have been wounded and 3 more are in captivity. During this period, Ukrzaliznytsia evacuated 3 million citizens from the center, south and east of Ukraine to the western regions, as well as 400 thousand from the west to neighboring states.

Prosecutor General Iryna Venediktova reported that 12 journalists (including citizens of the United States, Ireland and the Russian Federation) have been killed in Ukraine since the war began. Another 10 media representatives received injuries of varying degrees of severity. According to the Unified Register of Pre-Trial Investigations, Russian troops committed crimes against at least 56 media representatives.

Ukrainian President Volodymyr Zelenskyi, speaking at the 20th Doha Forum in Qatar, declared that Mariupol is under blockade and all roads to the city are closed. Russian troops do not even allow humanitarian cargoes of food, water, medicine to enter the city. The Mariupol City Council, citing eyewitnesses, stated that Russian troops forcibly removed medical personnel, patients, and other Mariupol residents who had been hiding from shelling in the basements of a medical facility (City Hospital No. 1) to an unknown destination.

The head of the Kharkiv Regional Military Admimistration Oleh Syniehubov reports on the repression of Russian troops against local authorities in the region. In Balakliia, Russian troops detained Deputy Mayor Serhii Poltorak and Oleh Bludov, head of the Civil Defense and Law Enforcement Department.  There is information that the mayor of Balaklia Ivan Stolbovyi was also detained. Mykola Sikalenko, the head of the Tsyrkunivka community, is in captivity.

The Press Service of the State Nuclear Regulatory Inspectorate reports that Zaporizhzhia NPP personnel and their families are under constant psychological pressure due to the presence of hostile Russian troops and a large number of military equipment at the NPP site and in Enerhodar. There is still a shortage of food and medicine in Enerhodar. However, at present the plant staff continues to monitor the condition of power units and ensure their safe maintenance.

The Minister of Community and Territorial Development Oleksii Chernyshov said that since the beginning of the Russian invasion in Ukraine, about 4,500 houses, 100 enterprises, about 400 educational institutions and 150 health care facilities have been destroyed.  According to the President of Ukraine Volodymyr Zelenskyi, at least 59 buildings of spiritual significance were damaged in 31 days of the war in Ukraine.

The press service of the Ministry of Energy indicates that as of March 26, 330,000 Ukrainians have no gas supply; more than 1,327 settlements and more than 863,000 consumers were left without electricity.

Residents of Slavutych, Kyiv region, staged a pro-Ukrainian rally, but the Russian military used stun grenades and fired into the air to disperse the crowd. One person was injured during the rally.

Minister of Energy Herman Halushchenko stated that Ukraine proposes to use its underground gas storage facilities to create a strategic gas supply for European countries.

Foreign Minister Dmytro Kuleba and Defense Minister Oleksii Reznikov held negotiations in Warsaw with US Secretary of State Antony Blinken and US Secretary of Defense Lloyd Austin. For the first time in the history of the US-Ukraine Strategic Partnership, the talks took place in the format of a quadriga of foreign and defense officials. US President Joe Biden also joined the meeting with Ukrainian ministers. The talks focused on US support for Ukraine, including the imposition of new sanctions against Russia by the United States. In addition, US Secretary of State Antony Blinken said that the United States is ready to provide Ukraine with an additional $100 million to improve the Ukrainian Ministry of Internal Affairs’ security of borders and critical infrastructure, as well as support law enforcement functions in the conditions of Russian aggression.

During his stay in Warsaw, US President Joe Biden delivered a speech on the international community’s efforts to support Ukraine. He strongly condemned Russia’s actions and called on Europe to unite and oppose Russia’s aggressive policy.

Volodymyr Zelenskyi made a video address at the Qatar’s Doha Forum. The President of Ukraine called on energy-supplying states to increase energy production in order to deprive Russia of opportunities for energy blackmail. He stressed the need for real reform of international institutions (UN mechanisms), and called on the world to join forces to prevent a food crisis.

The Minister for Foreign Affairs of Ukraine Dmytro Kuleba discussed with the OSCE Chairman-in-Office and Polish Foreign Minister Zbigniew Rau further steps to alleviate the humanitarian crisis in Ukraine and end Russian aggression.

The European Organization for Nuclear Research (CERN) has announced the suspension of cooperation with Russia and Belarus concerning Russia’s military invasion of Ukraine.

The European Commission and the Government of Canada have announced the launch of a global fundraising campaign in support of Ukrainian refugees. The fundraising will take place within the framework of the online event “Stand Up for Ukraine”, announced by President of Ukraine Volodymyr Zelenskyi on April 9.