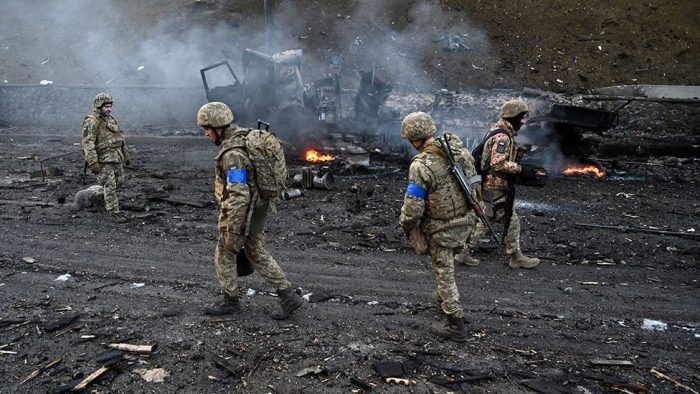 The enemy aggression against Ukraine continues. Their main efforts are focused on the Poliske and Siverske operational directions in order to encircle the city of Kyiv.
The adversary continues the buildup of its grouping in Polissia area. Units with the 36th Combined Arms Army of the Eastern Military District of the Russian Armed Forces are moving in the directions of Bucha, Kapitanivka, and Bilohorodka.
Engineering units are being transported from Belarus to Chornobyl for transplantation across the rivers of Teteriv and Irpin, as well as for ensuring logistics of the occupying forces.
The Russian army is experiencing an acute shortage of fuel and food, so the railway infrastructure of Belarus is being actively used to deliver military cargo for the Russian occupation forces deployed in the territory of Ukraine.
The units with the Central Military District of the Russian Armed Forces continue their advance in the directions of Boryspil and Ichnia. Backups are pulled out.
The enemy set up a pontoon crossing in the area of the settlement of Komaryn across the Desna River and in the Orane area – across the river of Teteriv.
Russia transferred their Su-34 tactical aircraft from Moscow region to the Baranovichi airport on the territory of Belarus.
In the Siverske direction, the Russian invaders, involving up to 14 battalion tactical groups (the 90th tank division and 41st combined arms army), completed the regrouping and continued the offensive to blockade Kyiv from the northeast direction.
After an unsuccessful attempt to seize the city of Chernihiv, the invaders are making a detour around the city in the direction of Ivanivka and Kozelets.
In the direction of Sumy and Pryluky, the enemy penetrated some 200 km into the Ukrainian territory before being stopped.
Part of the Northern Fleet of the Russian Armed Forces, consisting of two battalion tactical groups, continued the offensive towards Kremenchug, advancing 120 km in. The enemy has been stopped there.
In the Slobozhanske direction, the Armed Forces of Ukraine inflicted heavy losses on the units of the 20th combined arms army of the Russian Armed Forces. A battalion tactical group of the 4th Panzer Division has been destroyed. Due to significant losses, the leadership of the unit has been disorganized.
According to intelligence data, preparations are underway for the withdrawal of units to Belgorod region. A decision on the urgent deployment of reserves is now being considered.
In the Tavria direction, the enemy continues offensive operations, regrouping to advance towards Kherson and Mykolayiv. Two battalion tactical groups that are part of the 20th motorized rifle division of the Russian armed forces continue their offensive toward Melitopol and Vasylivka, with part of their forces advancing toward Berdyansk and Mariupol.
Warships of the Caspian flotilla and the Black Sea fleet of the Russian armed forces, including the frigates Admiral Makarov and Admiral Essen, launched Kalibr cruise missiles.
In the Siverske direction, the operational group of the Armed Forces of Ukraine is holding back the advance of the enemy in the direction of Konotop – Poltava – Kyiv, conducting defensive battles at certain frontiers.
The total losses of the enemy forces over the three days (February 24, 25 and 26) of Russia’s war of aggression against Ukraine:
Aircraft – 27
Helicopters – 26
Tanks – 146
Armored personnel carriers – 706
Artillery – 49
Buk missile launcher – 1
BM-21 Grad MLRS – 4
Combat armed vehicles – 30
Tanks – 60
Tactical-level UAVs – 2
Ships / boats – 2