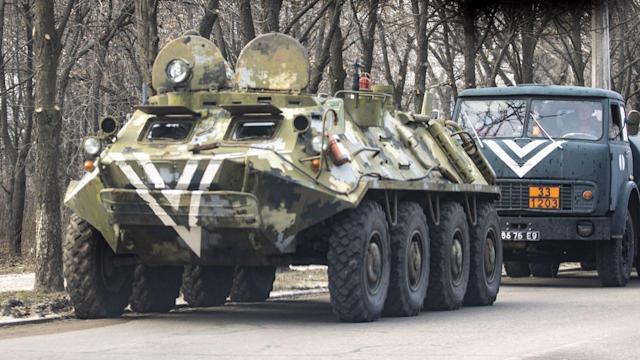 The Russian troops have crossed Ukraine’s borders from the territory of Russia, Belarus and thetemporarilyoccupied parts of Ukraine’s Donetsk, Luhansk regionsand Crimea. At the same time, Russia keeps attacking Ukraine from the East, South, North (including the territory of Belarus) by air.

Ukrainian Air Force shot down a cruise missile launched at the capital of Ukraine, Kyiv, by a TU-22 bomber from the territory of Belarus. Other military actions against Ukraine are being perpetrated from the territory of Belarus. This is another war crime committed against Ukraine and its people. Those providing assistance to Russia’s invasion in Ukraine will bear responsibility with Russia in accordance with the international law.

Russia uses all its military potential to attack Ukraine and has begun redeploying reserve units on the border with Ukraine. It fires cruise and ballistic missiles at cities, attacks with aviation, tanks and artillery, sends subversion and reconnaissance groups, which mark residential buildings in preparation for the air attacks.

Russia’s missiles are now aimed at destroying the infrastructure objects: they targeted the radioactive waste disposal site near Kyiv (the extent of the destruction is being assessed), the gas pipeline in Kharkiv and the fuel base in Vasylkiv (Kyiv region) are now burning (the levels of ecological threat and toxic contamination are being assessed). Fuel and gas stations around the country keep being targeted by Russian missiles.

Among other infrastructural and industrial damage are the following: the blown-up bridges (Stoyanka on Kyiv-Zhytomyr highway, between Bucha and Irpin) and the water dam on the border to Crimea. The objects of logistic infrastructure (bridges, airports) and water reservoirs remain among the targets (Vyshhorod dam, which could lead to destroying other ridges of the cascade in Kaniv, Kremenchug, etc up to an accident on Zaporizhzhya nuclear power plant).

Russian missiles keep dropping on civilians’ heads and buildings, while Russian tanks keep trying to force their way into Ukraine’s capital. It is the most horrific time for Kyiv since 1941 when it was attacked by Nazi Germany.

Kyiv remains one of the main targets of the cruise missiles, Kharkiv keeps being subjected to shellfire, many people have lost their homes. The activity of the subversion and reconnaissance groups has increased in Sumy, Chernihiv, Zhytomyr, Kherson and Kharkiv regions. There is the evidence of sniper activity in the area.

Such towns as Schastya and Stanytsia Luhanska near Luhansk are now nearly destroyed, as well as residential buildings in and around Kyiv and Kharkiv. The enemy took control over the airport in Berdiansk and the towns of Henichesk and Nova Kakhovka.

The Russian troops continue severe shelling of both military infrastructure and civilian objects, attacked Zmiinyi Island in the Black Sea, seized the Chornobyl Nuclear Power Station and a part of southern Kherson region including the North Crimean Canal.

Due to the active moving of Russian heavy militaries through the Chornobyl exclusion zone the radiation level has increased rapidly.

In the Black Sea Russian war ships deliberately attacked two civil vessels under the third country flags (Panama and Moldova) approaching Ukraine, which constitutes a flagrant violation of the International Maritime Law. Currently Russian military vessels are blocking the access of civil ships to the North-Western part of the Black Sea along Ukraine’s shoreline. In violation of the International Convention of the Safety of Life at Sea, the humanitarian aid mission (the rescue ship ‘Sapphire”) was captured and detained by Russian warships in the Snake Island area.

The web-sites of the governmental institutions of Ukraine suffer from cyber attacks. The “sleeping” sabotage groups continue their attempts to sew panic among the civilian population through social networks and other means of on-line communication.

In response, Ukraine has activated its right for self-defence according to the Article 51 of the United Nations Charter.

The Russian propaganda speculates about Ukraine preparing a ‘dirty bomb’, which is merely a sick fantasy. Ukraine does not possess nuclear weapons or  materials for it, and does not conduct any work to create or acquire them. We are a responsible member of the NPT.

The Russian troops are suffering losses: aircrafts, helicopters, tanks, trucks, personnel. The aggressor forces have already lost about 4300 in manpower during 24-26 February.

The Supreme Commander-in-Chief of the Armed Forces of Ukraine had given orders to inflict the maximum possible losses to the aggressor.

Tens of thousands of Ukrainian citizens have already joined the territorial defence units of the Armed Forces of Ukraine. And this number is growing.

The Russian military fired on ambulance crews in the areas of Zaporizhzhia and Kyiv. In addition to the attacks on emergency medical care providers, hospitals are one more chosen fire target for the Russian occupiers.

As of today, over 210 people including at least 5 children were killed and over 1115 people (at least 35 children) wounded in Ukraine during the first days of the Russian invasion. (The numbers are being updated).

In Okhtyrka district of Sumy region, Russian tanks shot down a bus with civilians. The Russian military does not allow ambulances. The surrounding area is mined. Family doctors are going by foot to provide medical care to the victims.

With the Office of the Attorney General of Ukraine, we are collecting these and further evidence, which we will transfer to The Hague.

Ukraine has submitted its application against Russia to the ICJ. Ukraine filed a case against the Russian Federation at the International Court of Justice, and a request for the Court to issue an order of provisional measures against Russia.  Ukraine seeks an emergency hearing and an order by the Court that Russia must cease its unlawful attack on Ukraine.  Russia will have to answer for its behavior at the World Court in the Hague. The Court has jurisdiction to hear Ukraine’s case, and to order emergency measures, on the basis of the Convention on the Prevention and Punishment of the Crime of Genocide.  Russia must be held accountable for manipulating the notion of genocide to justify aggression. We request an urgent decision ordering Russia to cease military activity now and expect trials to start next week.

On 24 February 2022, the Verkhovna Rada of Ukraine approved President’s decision to impose the martial law on the entire territory of Ukraine for a period of 30 days with the aim to ensure Ukraine’s defence, public safety and national interests.

Due to this, some constitutional rights and fundamental freedoms may be temporarily restricted (Articles 30-34, 38, 39, 41-44, 53 of the Constitution of Ukraine: inviolability of the place of dwelling, privacy of correspondence, interference in personal life, freedom of movement, freedom of thought and speech, freedom of views and beliefs, elections, peaceful assemblies, right to property, right to entrepreneurial activity, right for labor activity, right to strike, right to education). The temporary restrictions on the rights and legitimate interests of legal entities will also be imposed.

Regional, Kyiv city state administrations and local self-government bodies must establish defence councils and provide assistance to the military command in introducing and implementing measures of the martial law.

A curfew was introduced in a number of Ukrainian cities including Kyiv.

We call our partners to follow our example and to expel Russia’s ambassadors immediately. We deem it unacceptable to maintain diplomatic relations with the aggressor state, which openly attacks neighboring country without any reason. The international organizations must consider banning Russia’s membership for blatant violations of international law.

On 25 February 2022 the Committee of Ministers of the Council of Europe has adopted the decision to suspend the Russia`s rights of representation in the Committee of Ministers and in the Parliamentary Assembly of the Council of Europe. 42 delegations voted “in favour”, 2 “against”, 1 “abstained”, 1 “not voting”, and 1 delegation absent.It is the first decision of an international organization adopted as a result of the Russian Federation’s armed aggression against Ukraine. It has become the de-facto recognition by the European political circles of their mistake to allow the Russian delegation back to the PACE in June 2019.

Russia vetoed the UN Security Council draft resolution demanding troop withdrawal from Ukraine, cosponsored by 81 UN Member States. At the same time Russia was not supported by a single member of the Security Council. 11 of the 15 members of the UNSC voted in favour while India, China and the United Arab Emirates abstained from the vote.

We call on all states to support the draft resolution to stop Russian invasion, which is to be adopted by the General Assembly of the United Nations.

UN Secretary-General announced the appointment of Amin Awad as UN Crisis Coordinator for Ukraine. Mr. Awad will lead the coordination of all UN efforts, including its humanitarian response.

The world supports Ukraine. The international coalition in defense of Ukraine and peace continues to grow. As of now, there are 73 countries and 9 international organizations.

We count upon the proper reaction by the international community. We are grateful to our partners, who have provided and continue to provide additional support in a variety of ways:

Russian population is protesting against Putin’s decision to attack Ukraine. Thousands of Russian citizens in more than 50 Russian cities have already been detained for participating in peaceful protests.