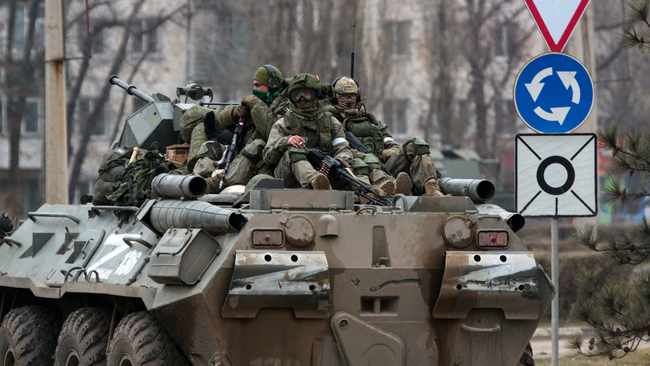 The Russian occupier continues the offensive operation against Ukraine.

The enemy has begun redeploying reserve units in the areas bordering Ukraine and continues to carry out air strikes on airfields, groups of troops of the Armed Forces of Ukraine in eastern Ukraine and in the northern part of Kyiv region. Single air strikes were carried out in the districts of SUMY, POLTAVA, MARIUPOL. From the Black Sea, the enemy launched Caliber naval-based cruise missiles across Ukraine.

The tactical aviation of the Russian Federation is controlled from the territory of Belarus and the TOT Crimea. In the area of ​​MOZYRY there are battalion tactical groups of the 35th All-Military Army of the Eastern Military District, which can be used to strike targets on the territory of Ukraine.

The enemy has repeatedly used operational and tactical aircraft in the areas of YUZHNY and ODESSA, at OZERNE airfield, and at civilian infrastructure facilities in the Kyiv region.

In the Slobozhansky direction, an operative group of the Armed Forces of Ukraine stopped the enemy’s offensive and continues to conduct defensive battles in the Kharkiv region. City battles are being fought in Okhtyrka.

In the coastal direction in the area of ​​KOBLEVO, as a result of the fire of mechanized units of 28 men, a boat and up to 20 personnel of the enemy’s sabotage – reconnaissance group were destroyed

A group of engineering barriers of the Naval Forces of the Ukraine Armed Forces mined airborne accessible areas.

The Air Force of the Armed Forces of Ukraine is repelling enemy air strikes as the result the IL-76MD military transport plane with a landing party of the Russian occupation troops has been destroyed.

Meanwhile continue conduction of systematic hostilities. Inflicting fire damage on the accumulation of enemy manpower and military equipment in Kyiv, Chernihiv and Kherson regions.
A combined force is conducting a defensive operation and holding positions along the entire line of demarcation.