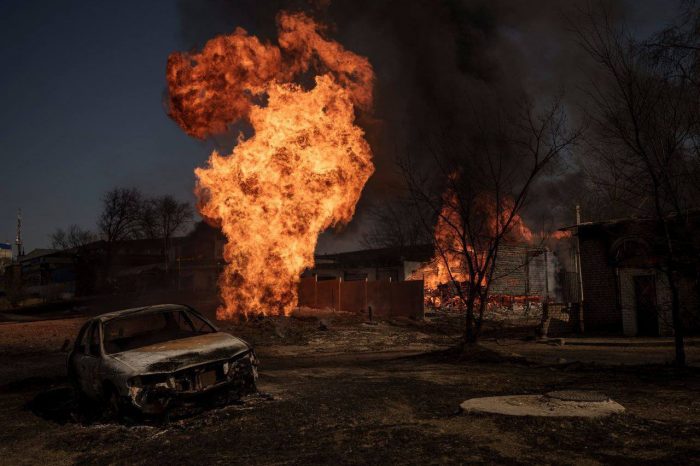 In the Kyiv region, the village of Lukyanivka, east of Kyiv, is reported to have been liberated near a seized section of the Kyiv-Sumy highway, where a Russian military stronghold had previously been located. Thus, the perimeter of defense around the capital expanded.

Serhiy Sukhomlin, the mayor of Zhytomyr, reported that a missile hit the territory of one of the military units in the city.

The head of the Sumy Regional Military Administration, Dmytro Zhyvytskyi, reported continued fighting in the Sumy, Konotop, and Okhtyrka districts of the region. During the day, Russian aviation carried out a bombing of the city of Okhtyrka.

The head of the Kharkiv Regional Military Administration, Oleh Syniehubov, stated that the Russian military carried out 55 strikes in the Kharkiv region over the past 24 hours. An increased activity of Grad and Uragan MLRS was recorded, there were casualties. According to him, Russian troops shelled the Kharkiv airport terminal from MLRS in the evening of March 24. In the morning of March 25, Syniehubov informed that artillery and Grad rockets were fired at the city clinic where humanitarian aid was being distributed in the Osnovyansky district of Kharkiv. As a result, 4 people were killed and 3 were wounded.

The Luhansk Regional Military Administration reports that during the day Sievierodonetsk, Rubizhne,Lysychansk, Zolote, and Shchedryshcheve were shelled. 10 residential buildings were damaged and 3 people were killed. Also in Sievierodonetsk, Russian troops shelled a food warehouse.

In the morning of March 25, police in Donetsk region informed that Russian troops shelled 8 populated areas (Mariupol, Marinka, Krasnohorivka, Avdiivka, Kramatorsk, Novomykhailivka, Dolyna, Pryshib) during the previous day. As a result of the shelling, 2 children were killed and 3 were injured.

The Donetsk Regional Military Administration reported that on March 25, Russian troops shelled Avdiivka and Marinka directions. As a result of the shelling, 1 child was killed; 6 people were injured.

The Ukrainian Navy indicated that a Russian navy ship shelled the village of Sanzhiyka on the coast of Odesa region on the morning of March 25.

On March 25, around 16:30, Russian troops launched a missile attack on the territory of the Air Force Command of the Armed Forces of Ukraine in Vinnytsia. According to Vinnytsia Mayor Serhiy Morhunov, there were no casualties from the missile strike.

On the way out of Mariupol, which has been under blockade for more than three weeks, Russian troops have opened the headquarters of the United Russia party. At the headquarters, they distribute party newspapers, conduct pro-Russian propaganda, and issue cards of the Phoenix mobile operator, which has been operating in the temporarily occupied territories of the Donetsk region since 2014.

On March 25, 7,331 people from Mariupol and Melitopol were evacuated through two agreed humanitarian corridors. About 3,000 people were transported from Mariupol to Zaporizhzhia. Another 4 thousand Mariupol residents were centrally evacuated from the city of Berdiansk by buses.

The Office of the Prosecutor General of Ukraine reports the deaths of 135 children in the war; 184 children were injured.

The Office of the UN High Commissioner for Human Rights notes that 1,035 Ukrainian civilians were killed and another 1,650 were wounded in a month of war in Ukraine.

At the same time, the Mariupol City Council reported that an airstrike on the Mariupol Drama Theater on March 16 killed about 300 people.

Lyudmyla Denisova, the Commissioner for Human Rights in Ukraine, said that the Russians continue to forcibly remove Ukrainians from the temporarily occupied territories to the Russian Federation. Citizens are forced to undergo so-called filtration camps to identify “unreliable”. “Ukrainians receive documents prohibiting them from leaving Russian regions for two years. There is no information about persons who did not pass the interview,” Denisova informed.

Melitopol Mayor Ivan Fedorov stated that the self-proclaimed head of the occupation administration, Halyna Danylchenko, had issued a personal order banning the distribution of humanitarian aid to the population.

The abduction of civilians in the occupied territories, including representatives of municipal governments, continues. On March 25, the head of the Chernihiv Regional Military Administration, Viacheslav Chaus, announced the abduction of 2 local government officials and 11 civilians in the temporarily occupied territories of the Chernihiv region. The head of the village of Motyzhyn, Olha Sukhenko, her husband and son were also abducted in the Kyiv region.

The Permanent Representative of Ukraine to the International Organizations in Vienna Yevhenii Tsymbaliuk addressed a meeting of the OSCE Permanent Council. Among other things, he reported that Russia had destroyed 548 educational institutions in Ukraine.  Among them are 220 schools, 155 kindergartens, 40 other institutions, including rehabilitation, sports, art schools, libraries.

The Ministry of Culture and Information Policy informed that at least 59 churches in 8 regions were destroyed during the war in Ukraine.

The Office of the High Commissioner for Refugees reports that more than 3.7 million Ukrainians have been forced to go abroad.

In the Kherson region, protests by local people continue in the population centers occupied by Russian troops in the region. In particular, on March 25, several hundred residents of the village of Novotroitske took part in a pro-Ukrainian rally.

The total direct losses of Ukrainian small and average-sized businesses over the four weeks of the war are estimated at $80 billion. Such data are contained in the results of a survey conducted by Advanter Group together with business clubs of Ukraine and the Center for Economic Recovery. They predict that in 2022, due to the decline of business activity in Ukraine, there will be a 21% reduction in GDP.

According to an analysis by the Kyiv School of Economics, the Center for Economic Strategy and Prozorro, the total amount of damage to Ukraine’s infrastructure during the war has reached $63 billion as of March 24.

On March 25, President of Ukraine Volodymyr Zelensky had a telephone conversation with Turkish President Recep Tayyip Erdoğan. The politicians discussed the outcome of the NATO summit, the threat of a food crisis and ways to prevent it, and shared assessments of ongoing diplomatic efforts on the Russian-Ukrainian negotiation process.

The General Prosecutor of the Lublin Triangle countries have signed an agreement on the establishment of a joint investigation team to investigate Russia’s aggression and its war crimes in Ukraine. The General Prosecutor of Ukraine Iryna Venediktova noted that the group’s activities will be aimed at collecting, storing and fast information exchanging and evidence of Russian war crimes obtained during investigations.

The Minister of Finance of Ukraine Serhii Marchenko held an online meeting with the President of the European Bank for Reconstruction and Development Odile Renaud-Basso. The parties discussed the implementation of the EBRD Assistance Package in response to the war in Ukraine, which announced the allocation of 2 billion euros to support Ukraine’s resilience and assistance to affected countries.

The Swiss Government is fully joining the fourth package of sanctions against Russia, previously introduced by the European Union. In particular, restrictions will apply to the energy sector, imports from Russia of ferrous metals, exports to Russia of luxury goods and marine navigation equipment.

The US President Joe Biden paid a visit to Poland and discussed Russia’s invasion of Ukraine with Polish President A. Duda. Biden stressed the continuation of international efforts to support Ukraine.

During the US president’s visit, several thousand people rallied in Warsaw, calling on the United States and other NATO members to strengthen their support for Ukraine and provide it with anti-aircraft and anti-missile weapons.