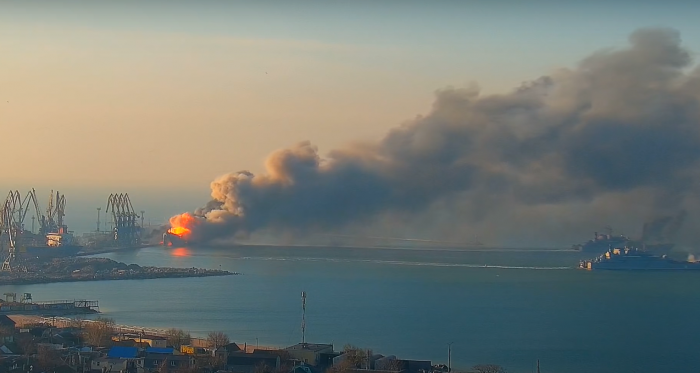 Russian troops are shelling settlements in the Fastiv district of Kyiv region.  In the urban-type settlement  Kalinovka as a result of shelling 3 people were wounded.  The village of Yasnohorodka came under fire.

Near Vasylkiv, the Russian military fired on the Kyiv-Ivano-Frankivsk evacuation train.  According to Ukrzaliznytsia, 3 cars were damaged.

Heavy artillery fired on the outskirts of Vyshhorod, north of Kyiv.  As a result of the shelling of New and Old Petrivtsi, the hotel complex was damaged.

According to the SES of Ukraine, on March 24, missile strikes damaged the building of the lyceum, boiler room and house of culture in the village Kirdany of Korosten district (Zhytomyr region).  No one was killed or injured.  Also were destroyed 5 houses, damaged 13 houses and 7 outbuildings in the village Rakivshchyna, Korosten district, 1 person was injured.

The head of the Sumy military administration Dmitry Zhyvytskyi reports that on the night of March 23-24, Russian troops fired on residential neighborhoods in the city of Okhtyrka.  Fighting also continues around the town of Trostyanets.  According to the SES of Ukraine, at least 5 people were injured in the Sumy region as a result of Russian air strikes, 1 person died.

In Kharkiv, Russian troops fired on the Nova Poshta checkpoint, near which Kharkiv residents were receiving humanitarian aid.  According to preliminary data, 6 civilians were killed and 15 others were injured.

The head of the Kharkiv military administration Oleg Sinegubov said that on the night of March 23-24, the Russian military fired rockets at the center of Kharkiv.  He also said that over the past 24hrs, 44 shellings of Kharkiv from artillery, tanks and 140 shellings from MLRS had been recorded.  According to the head of military administration, the city of Izyum remains a critical point in the region.  Also in the morning of March 24, Russian troops shelled the town of Zolochiv, and the previous day – the town of Balakliya.

The head of the Luhansk Regional State Administration, Serhiy Haidai, said on TV that the Russian military had advanced into the cities of Rubizhne and Popasna (Luhansk region) and established themselves there, but did not occupy them completely.  Gaidai later said that Russian servicemen opened fire on local residents in Rubezhnoye with small arms.  According to preliminary information, 1 person was killed and 1 was injured.  In total for the past day in Severodonetsk, Rubizhne and Lysychansk 5 people were killed and 8 others were injured.  32 objects were damaged, including 7 apartment buildings and 9 private houses, a school and a cinema in Severodonetsk.

The head of the Donetsk Regional State Administration Pavlo Kyrylenko reports that at least three people were killed by Russian shelling in the region on March 24 – in New York, Novoselivka and Novopokrovsky;  6 people were injured There are no exact data on the victims in Mariupol and Volnovakha.

On the morning of March 24, explosions and a fire on a large landing ship of the Russian fleet «Saratov» were observed in the port of Berdyansk, which was temporarily captured by the Russian military.  It probably can’t be repaired.  Two large landing ships (Caesar Kunikov and Novocherkassk) left the port area and were also damaged.

Zaporizhzhya military administration, referring to the head of the Malynivka community, said that the Armed Forces had liberated the village of Malynivka (Zaporizhzhya region) from the Russian military.

In the evening of March 24, Russian troops fired two missiles at one of the military units on the outskirts of Dnipro.  According to the local SES, buildings on the territory of the unit were damaged.  Information on the dead and injured is being clarified.

The chairman of the Nikolaev military administration Vitaly Kim  reported that the Ukrainian troops pushed back Russians in the Nikolaev area to border with the Kherson region.

As a result of shelling by Russian troops in Yavkine 3 people dead, 13 were wounded.

Energoatom reports that on March 24, a group of Russian journalists arrived at the Chernobyl nuclear power plant temporarily occupied by Russian troops to film propaganda material about the station’s operation.

The Ministry of Foreign Affairs of Ukraine denies the information of the Russian mass media about the alleged detention of Russian nuclear specialists on the territory of the Rivne NPP.  It is noted that 4 Russian citizens who accompanied the cargo of nuclear fuel and arrived at the station before February 24, now voluntarily remain on Ukrainian territory outside the nuclear power plant.

On March 24, 7 humanitarian corridors were activated, 3343 people were evacuated from the zone of active hostilities.

The Prosecutor General’s Office reports that 128 children have been killed and more than 172 wounded as a result of a large-scale Russian invasion of Ukraine.

The press service of the State Inspectorate for Nuclear Regulation of Ukraine notes that the Chernobyl NPP and the Exclusion Zone do not allow regulatory control over the state of nuclear and radiation safety, as well as control of nuclear materials.  The current situation endangers the lives and health of workers and their families, creates significant psychological and moral pressure on operational staff.

Mariupol City Council reports that about 15,000 Mariupol residents were deported illegally and deported to Russia.  President of Ukraine Volodymyr Zelensky stated that Ukrainians forcibly deported to Russia were deprived of documents and communications, and then tried to mobilize into the army.

Repressions against civilians continue in Kherson Oblast.  Ukrainian businessman and politician Serhiy Khlan reports detention of Dmytro Afanasyev, deputy of the Ship District Council and head of the European Solidarity faction, on March 22

Verkhovna Rada Commissioner for Human Rights Lyudmila Denisova said that 200,000 people in the Donetsk region do not have access to drinking water.  In addition, residents of Mariupol, Mykolaiv, Kharkiv, Okhtyrka, Izyum, Makarov, Polohy, Vasylivka, Orikhiv, Huliaipil, Chernihiv, Trostyanets and many other settlements were left partially or completely without water.

Deputy Prime Minister for the Reintegration of the Temporarily Occupied Territories of Ukraine Iryna Vereshchuk said that the first full-fledged exchange of prisoners of war in the format of 10 to 10. Also in exchange for 11 civilian Russian sailors who were rescued from a sunken ship near Odessa, managed to return to Ukraine 19  Ukrainian civilian sailors from the rescue ship “Sapphire”, who were captured while trying to take the Ukrainian military from the island of Snake.

The head of the Chernihiv Regional State Administration, Vyacheslav Chaus, said that up to 200 civilians had been killed in the shelling in Chernihiv.

According to the Kyiv military administration, 75 civilians, including 4 children, have died in the capital since February 24.

The Nikolaev head of the military administration reported that since the beginning of the Russian invasion in the Nikolaev area 1299 civilian objects are partially or completely damaged.  Of these, 964 are housing facilities, 24 are medical and cultural institutions, and 30 are educational institutions.

According to the Institute of Mass Media of Ukraine, as of March 24, 148 crimes against journalists and media, for which Russia is responsible, have been recorded in Ukraine.  5 journalists were killed in the line of duty, 7 were injured, and 1 journalist went missing.

According to Health Minister Viktor Lyashko, 246 health facilities were damaged in a month of active hostilities in Ukraine, 13 of which were destroyed without the possibility of restoration.

The Verkhovna Rada passed a law on exemption from customs duties and value added tax on imports of goods imported by enterprises.

During the martial law, the Verkhovna Rada simplified the access of Ukrainian farmers to the lease of land plots, as well as deregulated some forms of relations between agricultural producers and the state.

In Ukraine, the law on the organization of labor relations in martial law came into force on March 24.

During an emergency NATO summit, Ukrainian President Volodymyr Zelensky called on members to call for military assistance.  In a statement following the summit, NATO heads of state and government called on Russia to end the war immediately and withdraw all its forces from Ukraine, and agreed to provide further support to Ukraine in military, economic and humanitarian spheres.

Volodymyr Zelensky addressed the European Council.  He described the devastating results of the Russian invasion, thanked the EU for its support and called for promptness in addressing Ukraine’s European integration.

The President of Ukraine Volodymyr Zelenskyi met with the Speakers of the Parliaments of Latvia, Lithuania and Estonia, who arrived in Kyiv.  He thanked these states for their active support, informed about the consequences of a full-scale Russian invasion of Ukraine and stressed the importance of further strengthening sanctions against Russia.

Volodymyr Zelensky also made a video address to politicians and the people of Sweden.  The President thanked for the support (Sweden’s historic decision to provide Ukraine with the necessary weapons and accession to sanctions).  The head of state called on the Swedish government to give up Russian oil, block ports for Russian ships, and invited Sweden to take part in the reconstruction of Ukraine after the war.

As part of the renewed 11th Extraordinary Special Session of the UN General Assembly on Ukraine, a resolution was adopted condemning Russia’s violation of international humanitarian law and human rights in Ukraine.  The document was supported by 140 states.  Only 5 countries voted against: Russia, North Korea, Belarus, Syria, Eritrea.  By supporting this document, UN member states reaffirmed Russia’s sole responsibility for the humanitarian consequences of the aggression against Ukraine.

The United States has imposed a new package of sanctions against companies in Russia’s defense industry, the executive director of Sberbank and the State Duma of the Russian Federation.

Canada has imposed sanctions on 160 members of the Federation Council, and has begun a process of restricting exports of certain sensitive goods and services to Russia.

The information in the digest is collected from official sources – reports of state authorities of Ukraine, Ukrainian and international news agencies.  The accuracy of the data is carefully checked by the project team and corrected in case of fake news.