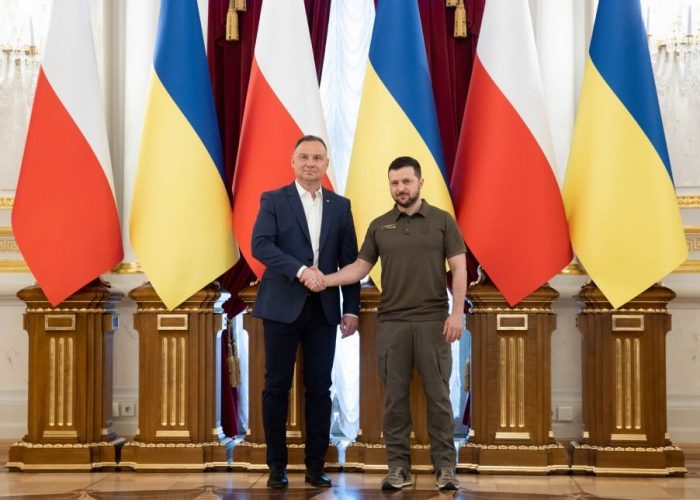 Russian troops continue their offensive to seize the city of Sievierodonetsk and reach the administrative borders of Luhansk region. After more than 2.5 months of fighting, the heroic defense of Mariupol was completed and the Ukrainian garrison was taken to the temporarily occupied territories. Negotiations on the return of the Ukrainian military as part of an exchange are underway.

During May 20-22, Russian forces launched missile strikes against the town of Malyn (Zhytomyr region). The first strike on May 20 caused the most damage, with more than 100 houses and the train station damaged, according to the town mayor Oleksandr Sytailo. Preliminary information says that 1 person was killed and 3 more were injured.

Russian forces continue to strike the border areas of Chernihiv and Sumy, using mortars and MLRS.

Russian troops, after several days of inactivity, resumed strikes against Kharkiv on May 19. Shelling of other populated areas in the Kharkiv region is also ongoing. In particular, on May 20, a missile strike destroyed a cultural building in the town of Lozova. The shellings lead to casualties among civilians — during May 20, 1 person was killed and 20 were wounded in the territory of Kharkiv region.

Near Kharkiv, the Russian military is concentrating its efforts to maintain taken positions. The regrouping and replenishment of units near Izium continues as they prepare to advance towards the city of Sloviansk in Donetsk region.

In Luhansk region, Russian troops concentrated their efforts on an offensive to capture the city of Sievierodonetsk. In the southern section of the front near Popasna, they managed to achieve isolated successes. Advancing in this area, they try to cut off the Ukrainian units defending Sievierodonetsk.

Intensive shelling of Sievierodonetsk persists. During May 19, at least 12 civilians were killed and more than 40 people were wounded in the city. The next day, Russian troops shelled a school in Sievierodonetsk, where local residents were hiding, killing 3 people.

In the Donetsk region, active fighting is being conducted near Donetsk, in the Avdiivka and Marinka areas. In the north of the region, Russian troops are preparing to continue their offensive in the direction of Lyman. In the south, fighting for Mariupol has come to an end. The Russian military are conducting filtration activities in the city and trying to clear the port infrastructure of mines.

The shelling of populated areas in Donbas continues. Avdiivka is hit particularly hard. Strikes are carried out both against the town’s housing stock and infrastructure and against the Avdiivka coke plant. Between 19 and 22 May, 20 civilians were killed and 32 wounded in the region.

Shelling is ongoing on the front line in Zaporizhzhia region. Rocket attacks also continue — on the night of May 22, Russian troops launched a missile at the civilian infrastructure of one of the region’s villages.

The Russian military continues to shell infrastructure facilities in the Poltava region. In particular, on May 20, a missile strike was launched against the town of Lubny, an important transport hub.

On May 22, during the day and night, the Russian military continued shelling Dnipropetrovsk region, with shelling recorded in at least three population centers.

Russian forces continue to shell southern Ukraine. Rocket attacks were carried out on the territory of Odesa region, hitting industrial facilities as a result. Shelling of settlements near the front line, which runs near the administrative border of Kherson region with Mykolaiv and Dnipropetrovsk regions, is also ongoing. In the Kherson region, the Russian military are reinforcing their positions as well as mining roads and bridges. Thus, they block civilians from entering Ukrainian-controlled territory.

On May 21, a missile strike hit a military infrastructure facility located in Rivne region. 6 people were wounded as a result of the strike.

The blocking of Russian propaganda disseminated on the Internet continues. In particular, YouTube has deleted more than 70,000 videos and 9,000 channels related to the war in Ukraine, including those calling the Russian military invasion of Ukraine a “liberation mission”.

The Russian military is preparing disinformation campaign about the events in Mariupol. They are trying to obtain false testimony from local residents that the city was destroyed as a result of the actions of the Armed Forces of Ukraine. Providing such testimonies is a condition for registering for compensation for the loss of housing or family members of local civilians.

According to the UN Office of the High Commissioner for Human Rights, as of May 20, the number of civilian casualties in Ukraine since February 24, 2022, the beginning of the large-scale Russian invasion, is 8,189 (3,838 killed and 4,351 wounded).

As of the morning of May 22, more than 662 children had been affected as a result of the armed aggression of the Russian Federation in Ukraine. According to official data, 232 children were killed and more than 430 were injured.

According to Mariupol Mayor Vadym Boichenko, one of the worst humanitarian disasters and the largest genocide in Europe since World War II is taking place in the city. Mariupol is practically destroyed — houses, infrastructure, schools, hospitals, and enterprises have been demolished. About 100,000 civilians remain in the blockaded city; almost 40,000 people have been deported to the Russian Federation and the temporarily occupied territories of Donetsk and Luhansk regions.

Ombudsman Liudmyla Denisova reported continued forced mobilization on the territory of the temporarily occupied territories of Donetsk and Luhansk regions, which violates Article 51 of the Geneva Convention on the Protection of Civilians in Time of War. Also, the Russian military checks the population of temporarily occupied Mariupol. Almost 4,000 men from the city are in filtration camps. They are in terrible conditions, subjected to torture and abuse.

The World Food Program (WFP) has warned that the blockade of Ukrainian ports in the Black Sea continues to threaten global food security. According to WFP Executive Director David Beasley, the ongoing war will lead to starvation and destabilize nations. At the same time, the Russian military continues to illegally export grain from the temporarily occupied territories of Ukraine. At present, it is known that more than 400 thousand tons of these agricultural products have been taken out by looters.

In the temporarily occupied territories of southern and eastern Ukraine, humanitarian conditions continue to deteriorate for the population, which is losing access to basic commodities. The mayor of Kherson stated that the city will run out of medicine in two weeks; there are also limited supplies of oxygen. Regional authorities have reported power and water outages, communication problems, and food shortages in some places. They called for the creation of safe corridors for the evacuation of civilians and the delivery of humanitarian aid. However, as a result of the actions of the Russian military, residents have only limited freedom of movement within the region, and volunteers with humanitarian aid are banned from entering the area.

Russian troops continue to destroy civilian infrastructure. The World Health Organization (WHO) has reported 235 attacks on health care facilities in Ukraine, killing at least 75 people. Such actions deprive people of urgently needed care, endanger medical workers, and undermine the functioning of the health care system. President Volodymyr Zelenskyi indicated that 1,873 educational institutions have already been destroyed in Ukraine during the full-scale war.

According to data collected by the Office of the UN High Commissioner for Refugees, more than 6.4 million people have left Ukraine for neighboring states (53% of them for Poland). At the same time, ombudsman Liudmyla Denisova informed about deportation of more than 1.3 million Ukrainians to Russia.

On May 20, in the temporarily occupied town of Enerhodar in Zaporizhzhia region, fire department rescue workers protested after the Russian military kidnapped the head of the rescue squad, Vitalii Troian. Russian troops used force against them and dispersed the rally. On May 22, there was an explosion in Enerhodar, which injured the head of the town’s occupation administration, Andrii Shevchik.

According to the KSE Institute analysts’ calculations, the amount of direct damage to Ukraine’s infrastructure due to the large-scale invasion by the Russian troops reached $97.4 billion.

The rating agency Moody’s downgraded Ukraine’s long-term credit rating from Caa2 to Caa3 and changed the outlook to negative.

The Ministry of Infrastructure reported that Ukraine and the United States have signed a Memorandum on Transport Cooperation.

On May 21, 2022, the National Bank of Ukraine lifted restrictions on setting the exchange rate at which banks sell cash foreign currency. Previously, the respective exchange rate should have been set at no more than 10% of the official exchange rate. According to the NBU’s explanations, this will allow to prevent the outflow of capital and protect Ukraine’s international reserves.

International leaders and members of the government continue to show support for Ukraine in its fight against Russian aggression by making visits to Kyiv. President of the Republic of Poland Andrzej Duda visited the Ukrainian capital. He held talks with Ukrainian President Volodymyr Zelenskyi and addressed the Verkhovna Rada of Ukraine, presenting initiatives to conclude a new agreement on good-neighborliness between Ukraine and Poland and a bilateral agreement on joint border and customs control.

Also visiting Ukraine were the speakers of the upper and lower houses of the Irish Parliament, Mark Daly and Sean O’Farrell, and the Prime Minister of the Portuguese Republic, António Costa. Volodymyr Zelenskyi urged them to increase coordinated sanctions pressure on Russia, in particular within the framework of the sixth package of EU sanctions, and also invited Ireland and Portugal to join the projects of reconstruction of Ukraine.

Volodymyr Zelenskyi also had telephone conversations with British Prime Minister Boris Johnson and Italian Prime Minister Mario Draghi. He spoke about the course of hostilities; the sides discussed topical proposals to resume exports of Ukrainian agricultural products and fuel imports to Ukraine amid the conflict and the Russian blockade.

The world community supports Ukraine’s desire to hold Russia accountable for its aggression. 42 states took Ukraine’s side in the case against Russia in the International Court of Justice and announced their intention to join the suit.

Ukraine’s partners are increasing financial aid to support the Ukrainian economy during the war.

U.S. President Joe Biden signed a law to provide Ukraine with military, economic and humanitarian aid totaling nearly $40 billion. In addition, the White House announced an additional $100 million in military aid to Ukraine on May 19.

Canadian Finance Minister Chrystia Freeland announced a $250 million loan to Ukraine through the International Monetary Fund’s administered account. Portugal has decided to provide Ukraine with up to 250 million euros of financial support.

The heads of the financial departments of the Group of Seven (G7) countries, as well as representatives of the IMF, World Bank and Organization for Economic Cooperation and Development announced the mobilization of $19.8 billion of financial assistance to Ukraine, which will be used to overcome the budget deficit and support the country’s economy.  The Ministry of Finance of Ukraine reported that the state has received the final tranche of $600 million of the EU “emergency macrofinancial assistance program” signed by the parties on March 3, 2022. The money is aimed at preserving financial stability in Ukraine during the war. The European Parliament also supported the abolition for one year of EU import duties on all goods from Ukraine.

An important way to counteract Russia’s aggressive actions is to increase sanctions pressure. In particular, the UK imposed new sanctions against major Russian airlines: Aeroflot, Ural Airlines and Rossiya. Canada imposed additional sanctions against Russia: they affect 14 Russian oligarchs and businessmen. In addition to personal sanctions, Canada banned the export of luxury goods to Russia and the import of a number of luxury goods from Russia.

The European energy exchange Nord Pool stops trading Russian electricity from its only importer in the Baltic states, the Russian company Inter RAO. Thus, since May 22, 2022, the Republic of Lithuania completely stops imports of oil, electricity and natural gas from Russia.

Ukraine is preparing for a prolonged confrontation with Russia. The Verkhovna Rada extended martial law and the deadline for general mobilization in the country until August 23.