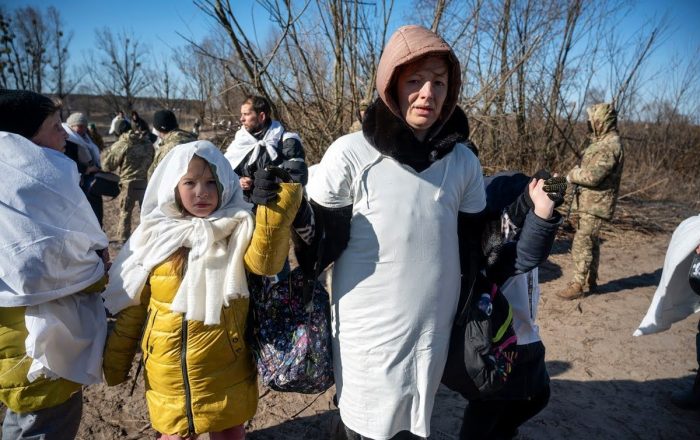 As of 8:00 am on March 24, 2022, 57 civilians were killed in the Russian invasion (excluding all victims in Mariupol, Volnovakha, Kyiv, Luhansk, Kharkiv, Kherson, Chernihiv and Sumy regions), including 2 children. 31 were injured. One civilian was captured, and according to official information, about 30 civilians were abducted or taken prisoner, mostly local government officials in Russian-occupied cities and Ukrainian activists.

Russia is committing large-scale war crimes in Ukraine. This is exactly the statement made by US Secretary of State Blinken. According to him, the United States already has enough evidence of Russian war crimes in Ukraine. The United States continues to gather evidence of such crimes to transfer them to international institutions in order to further prosecute the Russian military. According to the Ukrainian General Staff, during the 22 days of the war, Russia fired 1,200 missiles at Ukraine, which is 12 times more than in the five years of the war in Syria.

• against the Armed Forces;

• terror against the civilian population of the temporarily occupied Ukrainian cities.

Russia has identified and is pursuing a policy of brutal destruction and terror of civilians that actively opposes Russian aggression. In addition to large-scale military action against the Armed Forces, Russia is waging an equally large-scale war against the local population. In addition to massive airstrikes and artillery shelling of residential neighborhoods, civilian infrastructure, and humanitarian blockades of Ukrainian cities, Russia is terrorizing the temporarily occupied territories of southern Ukraine (Kherson, Zaporizhia regiont, Chernihiv, Sumy, and Kyiv region). The Russian military brutally kills civic activists who oppose the Russian occupation, kidnaps, captures, tortures and blackmails local officials who do not agree to cooperate with the Russian occupation authorities. They intimidate the local population and shoot at residents during peaceful rallies. The Russian military is blocking cities and creating a humanitarian catastrophe inside, preventing the import of medicines, food, water, etc. Recently, the Russian military has begun to forcibly deport Ukrainian residents of occupied cities to Russia. The deportation of the Ukrainian population is carried out in order to demoralize the patriotic inhabitants and change the demographic composition of the temporarily occupied territories.

Russian military fires on Ukrainian ambulances. As of March 24, 58 ambulances had been shelled, killing 6 doctors.

SAVEMariupol – Violent killings of civilians continue in besieged Mariupol. It became known about the death of another child – a talented young gymnast Kateryna Dyachenko (born in 2011). She died under blockages of a house that collapsed as a result of Russian shelling of the city.

SAVEChernihiv – Russian military applies Mariupol tactics to Chernihiv – a complete blockade of Ukraine’s humanitarian aid to the city, shelling of residential areas and civilian infrastructure. On March 23, the Russian army fired on city hospitals. According to the official information of the mayor Vladyslav Atroshenko, about 40 dead citizens are buried every day.

As of March 24, 121 children had died and 167 had been injured as a result of Russia’s full-scale war against Ukraine’s population, according to the Office of the Prosecutor General of Ukraine.

1 civilian was detained and taken prisoner, mostly heads of local authorities of the settlements occupied by Russian troops:

The day before he was taken prisoner (information to be specified):

• In the Kherson region, the mayor of Beryslav – Oleksandr Shapovalov. He was abducted by the Russian military along with a local activist (name unknown).

• In the Chernihiv region by the Russian military, the village head Mykola Budalovskyi, deputy and school principal Tetyana Bezlyudna.

• Mykola Sykalenko, the head of the Tsyrkunivka village council, was abducted in the Kharkiv region.

• In the Kherson region, the Russian military abducted the head of the village of Stara Zbur’yivka – Viktor Myronyuk

• In the Zaporizhzhia region, the Russian military captured the head of the Priazovsky local council, Andriy Solopov, and earlier Dmytro Bodya and Serhiy Priyma were abducted;

• Oleksandr Ponomaryov, a People’s Deputy of Ukraine from the Opposition Platform for Life party, was taken prisoner in Berdyansk (Zaporizhzhia Oblast), which is temporarily occupied by Russian troops.

Donetsk region: 5 were killed and 10 were injured.

Novomykhailivka – 1 person was killed and 2 were injured in the shelling.

Zaporizhzhia – the Russian military fired a mortar at a car with humanitarian aid for the residents of Mariupol. A volunteer was killed, carrying water, food and medicine to residents of a city blocked by the Russian army.

Rubizhne – as a result of a shell hit in a multi-storey residential building, 3 civilians were killed, including 2 children.

Severodonetsk – 1 person was killed and 6 were injured. The Russian military shot dead civilians when they arrived at the store.

Kharkiv region: 34 people were killed and 10 were injured.

Kharkiv – 24 bodies were found from the rubble of the Kharkiv Regional State Administration. On March 1, Russia fired rockets at the regional administration building, destroying the building. Disassembly of the debris continues to this day. 1 person was injured.

Lozova – 1 person was killed and 9 wounded as a result of shelling of private houses by Russian troops.