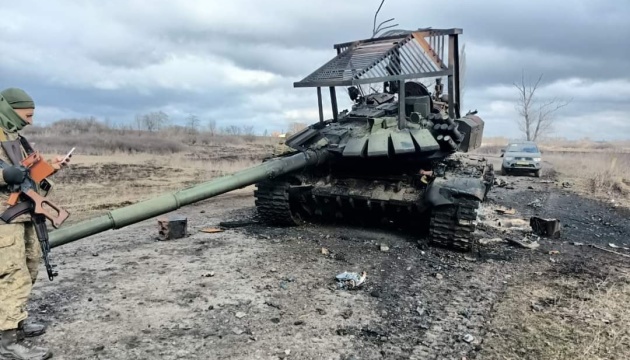 Russian troops continue their attacks in the East as well as missile and bomb attacks on infrastructure facilities. Russian propaganda claims about the seizure of Mariupol are untrue, as the Ukrainian military continues to control the territory of the Azovstal plant.

According to Oleh Syniehubov, head of the Kharkiv Regional Military Administration, about 15 shelling from MLRS was carried out in Kharkiv and the region during the night of April 20 to 21. In addition, artillery shelling targeted certain areas of Kharkiv (Saltivka, KhTZ and Oleksiivka), Derhachi, and Zolochiv and Chuhuiv districts of the region. According to preliminary information, 5 people were injured by the shelling. During April 21, Kharkiv was shelled about 50 times from artillery and multiple rocket launchers. Oleh Syniehubov informed about 2 dead and 2 more wounded civilians as a result of the shelling of Kharkiv.

Active fighting continues in the Izium direction, where Russia has concentrated up to 25 battalion-tactical groups. Russian troops are advancing in the direction of the village of Zavody; they are trying to gain a foothold in the vicinity of Dibrivne.

The head of the Luhansk Regional Military Administration, Serhii Haidai, denied reports that Russian troops had allegedly seized Rubizhne. The General Staff of the Armed Forces of Ukraine reports that fighting in the city area is continuing. Fighting also continues in the areas of Popasna and Novotoshkivske.

Despite Russian statements, fighting in Mariupol continues near the seaport and Azovstal plant. Russian troops are launching air and artillery strikes in the industrial zone. They are also advancing in the north of Donetsk region in the direction of Lyman, carrying out assault actions near the settlement of Zarichne.

Shelling on the front line persists. According to the Donetsk Regional Military Administration, at least 5 civilians (in Vuhledar, Yampil, Zarichne and Bakhmut) were wounded in the region during the day.

According to Ivan Arefiev, a representative of the Zaporizhzhia Regional Military Administration, the most acute situation in the region remains in the direction of Huliaipole-Polohy, where position battles are taking place.

Russian troops launched 2 missile strikes against Zaporizhzhia. The rockets landed on Khortytsia Island. 8 people were wounded. An evacuation train from Zaporizhzhia to Lviv was also damaged.

Valentyn Reznichenko, head of the Dnipropetrovsk Regional Military Administration, reported that 3 missile strikes were carried out on the railroad in the Novomoskovsk district of Dnipropetrovsk region on April 21. 5 civilians were injured as a result of the strikes.

The General Staff of the Armed Forces of Ukraine reports attempts by Russian troops to approach Mykolaiv. The shelling of the city continues. According to updated data, as a result of the shelling on the night of April 20-21 in Mykolaiv, 1 person was killed and 2 people were wounded. Also, Russian troops conduct combat reconnaissance on the front lines near the borders of Kherson and Dnipropetrovsk regions on the right bank of the Dnipro River.

The General Staff of the Armed Forces of Ukraine reports that in several population centers in the temporarily occupied territory of Kherson, the Russians have announced the mobilization of men, and continue to plan a so-called “referendum” and “census”. Local residents are forbidden to move between settlements in the region.

Minister for Reintegration of the Temporarily Occupied Territories Iryna Vereshchuk reported that the humanitarian corridor from Mariupol planned for April 21 did not work due to shelling near the assembly points. Mariupol Mayor Vadym Boychenko said that evacuation buses with 79 Mariupol residents who managed to leave the city on April 20 had arrived in Zaporizhzhia.

According to Oleksandr Vilkul, head of the military administration of Kryvyi Rih, the humanitarian corridor from Kherson region was also disrupted. In addition, the coordinator of the evacuation convoy, Volodymyr Marchuk, the head of the Novovorontsovska united territorial community, was taken prisoner.

A new exchange of prisoners took place. As a result, 10 Ukrainian servicemen (2 of them were officers) and 9 civilians were released.

The Office of the UN High Commissioner for Human Rights as of the end of day on April 20 recorded 5,264 civilian casualties in Ukraine as a result of the aggression of the Russian Federation (2,345 people killed, 2,919 wounded).

Juvenile prosecutors report that more than 584 children were injured in Ukraine. As of the morning of April 21, at least 208 children had been killed and 376 wounded.

The International Organization for Migration estimates that more than 7.7 million Ukrainians have been displaced by Russian aggression. About 5 million more people left the country.

The humanitarian catastrophe in Mariupol is worsening as bombing continues and the Russian military blocks humanitarian aid. Ukrainian President Volodymyr Zelenskyi reports that more than 400 wounded military personnel are currently blockaded in the city; there are also wounded civilians. Also, according to Zelenskyi, about 95-98% of all buildings in Mariupol have been destroyed.

Petro Andriushchenko, adviser to the mayor of Mariupol, stated that there were further war crimes committed by the Russian armed forces. In particular, he referred to the organization of a mass burial of Mariupol dead in the village of Manhush. Radio Svoboda journalists received satellite images showing the likely location of the mass grave — a trench more than 300 meters long. For comparison, the length of the trench of the mass grave in Bucha, where 67 bodies were found, was 13.7 meters.

The Main Intelligence Directorate of the Ministry of Defense of Ukraine reported that all occupied settlements in the Velykyi Burluk district of Kharkiv region were blocked by the Russian military. Departure is possible only to the territory of the Russian Federation. Humanitarian shipments from Ukrainian-controlled territory are blocked. Local residents were warned that volunteers attempting to deliver aid would be shot.

The Russian delegation to the UN rejected UN Secretary-General António Guterres’ appeal for an Easter humanitarian pause of four days for the safe passage of civilians wishing to leave the areas of hostilities and the delivery of humanitarian aid to the most affected areas of Ukraine.

Deputy Prime Minister of Economy Yuliia Svyrydenko informs that the Government has developed a plan for Ukraine’s recovery after the war, which includes Ukraine’s accession to the EU in 2024, energy independence, transition from raw material exports to processed products and development of military technologies.

Prime Minister of Ukraine Denys Shmyhal said it would cost $600 billion to rebuild Ukraine after the Russian invasion. Shmyhal called on members of the International Monetary Fund to donate 10 percent of the reserve assets received from the IMF to support this project.

World Bank President David Malpass indicated the physical damage to Ukraine’s infrastructure has reached $60 billion, and will grow even more as the war continues. The estimate does not include economic losses from the war.

Danish Prime Minister Mette Frederiksen and Spanish Prime Minister Pedro Sanchez arrived in Kyiv on a visit. As part of their visit, they attended Borodianka in the Kyiv region, which has been liberated from the Russian occupation. During their meeting with Ukrainian President Volodymyr Zelenskyi, they discussed possibilities for strengthening Ukraine’s defense capabilities, Ukraine’s post-war recovery and prospects for its European integration.

As a result of the visit, Prime Minister of Denmark Mette Frederiksen confirmed her agreement to Ukraine’s offer to lead the process of post-war reconstruction of Mykolaiv. In addition, she announced an increase in military aid to Ukraine. Spanish Prime Minister Pedro Sanchez indicated that Spain would send a team of experts to help investigate war crimes in Ukraine. He also confirmed that a cargo of Spanish military aid (200 tons of ammunition and other materials, 20 armored vehicles) was sent to Ukraine.

During his visit to the USA, Ukrainian Prime Minister Denys Shmyhal held a series of meetings with US politicians and public officials — US President Joe Biden, Treasury Secretary Janet Yellen and Speaker of the House of Representatives Nancy Pelosi. During the meeting, they discussed the expansion of financial support for Ukraine, the imposition of further sanctions against Russia, as well as the provision of humanitarian aid to Ukraine.

Ukrainian President Volodymyr Zelenskyi asked the Parliament of Portugal to give Ukraine Leopard tanks, armored personnel carriers and Harpoon anti-ship missiles to defend against Russian aggression. He also stated the necessity to strengthen sanctions against Russia and the principled decision of European companies to withdraw from the Russian market as well as the closure of Portuguese ports for Russian vessels.

The United States will also provide $500 million in direct economic assistance to the government of Ukraine. In addition, the United States bans Russian ships from entering U.S. ports.

The United Kingdom has provided $500 million in financial aid to Ukraine in the form of loan guarantees designed to mitigate the economic consequences of the Russia-Ukraine conflict.

The United Kingdom also imposed further sanctions against Russia: it banned imports of timber and a number of luxury goods, as well as increased duties on trade with Russia. The sanctions list includes 26 more Russian citizens and companies, including high-ranking military officials involved in war crimes in Ukraine.

Volodymyr Zelenskyi spoke at a World Bank conference where, among other things, he called for Russia to be removed from the institution and for a special “war tax” to be imposed on any trade and financial transactions of the Russian Federation. The money should be used for the reconstruction of Ukraine.

Lithuanian Defense Minister Arvydas Anušauskas said that his state had transferred heavy mortars, MANPADS, anti-tank weapons, grenades, ammunition, and machine guns to Ukraine. The total value of all the transferred military assistance reaches tens of millions of euros. In her turn, German Foreign Minister Annalena Baerbock stated that Berlin was ready to provide Ukraine with the necessary weapons, including armoured vehicles. Slovenia is ready to transfer a batch of T-72 tanks to Ukraine if the loss of these weapons is compensated by Ljubljana with deliveries of German armoured personnel carriers and armoured vehicles.

At an extraordinary meeting, the Estonian parliament unanimously adopted a statement recognizing Russia’s war crimes in Ukraine as genocide. Together with Estonia, the Parliament of the Republic of Latvia adopted a similar decision.