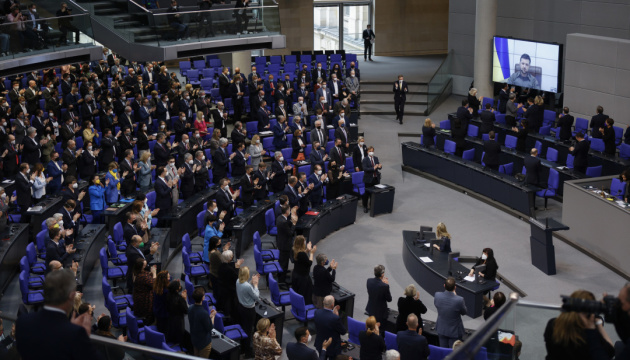 After three weeks of war, Russian troops are trying to continue their strategic offensive against Ukraine. The main efforts of the Russian Federation are aimed at advancing in the Luhansk and Donetsk regions. In addition, the tactic of rocket and bomb attacks on civilian infrastructure in areas where there is no active hostilities persists.

As a result of the shelling in the Sviatoshynskyi district of Kyiv, a warehouse and two cars caught fire, killing at least two people, according to the State Emergency Service of Ukraine.

On March 17, heavy artillery was used to shell residential houses in the village of Novi Petrivtsi (Kyiv region), killing a two-year-old child and injuring four people.

Rocket strikes were carried out on population centers in the Brovarskyi district.

Russian troops continue to partially blockade the city of Chernihiv, and are shelling the city with artillery. In the past 24 hours, 53 people were killed.

At least 27 houses were set on fire in the town of Rubizhne (Luhansk region) on the night of March 16-17, according to Serhiy Haidai, head of the Luhansk Regional Military Administration. At least five more fires took place in Popasna, and one in Severodonetsk. Later in the evening in Severodonetsk, Russian military fired on a shelter for mothers with children. As a result, in Rubizhne, Russian troops were able to advance beyond their positions in order to encircle Severodonetsk.

According to Veniamin Sitov, chairman of the Merefa community in the town of Merefa (Kharkiv region), on the morning of March 17, a shelling destroyed a school and a cultural center, and damaged neighboring houses. 21 people died as a result of the shelling, and 25 others were wounded, 10 of whom are in serious condition.

A fire broke out in the Barabashovo market as a result of the shelling of Kharkiv. One employee of the State Emergency Service died, said the mayor of Kharkiv Ihor Terekhov.

As a result of the shelling of Voznesensk, the warehouse where the weapons were stored was damaged, said the mayor Yevhen Velychko.

As a result of the counteroffensive of the Armed Forces of Ukraine, the village of Posad-Pokrovsky in the Kherson region on the Mykolayiv-Kherson highway was liberated. Thus, in recent days, the roads to Mykolaiv have been unblocked.

“On the night of March 16-17, the village of Maryanske in the Dnipropetrovsk region was shelled from the Grads,” said Oleksandr Vilkul, head of the Kryvyi Rih Military Administration.

The Air Command East reported that the air defense had destroyed two enemy missiles over the Dnipropetrovsk region.

With the help of electronic warfare equipment, Russian troops launched a radio broadcast calling to lay down the arms.

The Russian fake narrative about the presence of biological weapons on the territory of Ukraine is still being disseminated. The head of the Radiation, Chemical and Biological Defense Forces of the Russian Armed Forces gave a briefing on U.S. biolaboratories in Ukraine that allegedly infected birds with viruses and studied their migration routes to Russian territory.

The Center for Counteracting Disinformation under the National Security and Defense Council of Ukraine reports that fake information has been spread on the Internet that the Ukrainian authorities allegedly abandoned Mariupol.

On March 17, 8 of the 9 planned humanitarian corridors were activated. However, during the evacuation in the Bucha district, evacuation columns were fired upon with tanks. As a result, one police officer was killed and another was injured. The same situation occurred in Irpin, when a hail shell hit a police car.

Mariupol has been under siege for 16 days. In recent days, only about 30,000 people have been able to evacuate from the city by their own vehicles.

The abduction of representatives of the Ukrainian city self-government continues, and Viktor Tereshchenko, the head of the Velykoburlutsky territorial community in the Kharkiv region, was abducted from his office.

108 children died during the war in Ukraine. In addition to the dead, as of the morning of March 17, more than 120 children were injured in shelling and rocket attacks.

On March 17, the President of Ukraine Volodymyr Zelensky made a video address to the German Bundestag. In his speech, Zelensky stressed that Ukraine needs support from Europe and in particular Germany in ending the war on the part of Russia.

On March 17, Volodymyr Zelensky held talks with French President Emmanuel Macron, during which special attention was paid to continuing the peaceful dialogue.

The Lithuanian Parliament unanimously adopted a resolution calling on the United Nations to take immediate measures to ensure a no-fly zone over Ukraine. This was announced on March 17 by the press service of the Seimas. The same decision was made by the Seimas of Latvia.

It also became known that the Committee of Ministers of the Council of Europe has announced the termination of any relations with Belarus due to its active participation in Russia’s aggression against Ukraine.

On March 17, Canada closed the airspace for aircraft and aircraft operators in Belarus in support of Russian aggression in Ukraine, according to the Ministry of Transport of Canada. This restriction is part of a series of economic measures against Russia’s immediate supporters.  In addition, the country has expanded the package of sanctions against 22 high-ranking officials of the Ministry of Defense of Belarus. From now on, their property in Canada will be frozen, and these people will not be able to enter the country.

The European Space Agency (ESA) has refused to work with Roscosmos to develop ExoMars, a joint Mars exploration program.

The Minister of Europe and Foreign Affairs of France Jean-Yves Le Drian announced that France has provided financial assistance to Ukraine in the amount of 300 million euros. The French minister strongly condemned Russia’s military actions against the civilian population and settlements of Ukraine in violation of international humanitarian law.