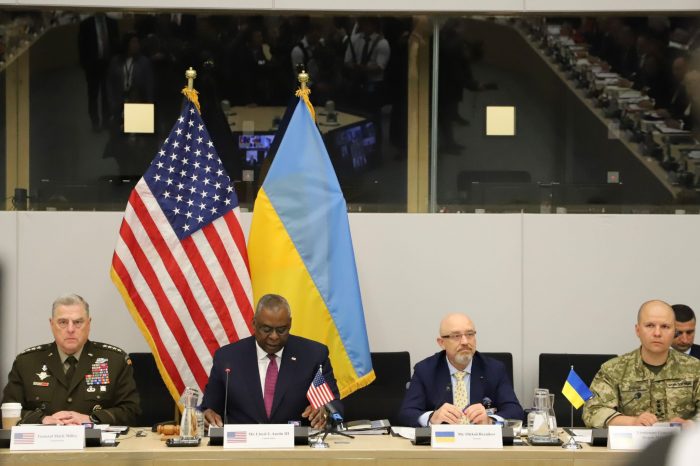 Russian troops are concentrating their efforts on storming Sievierodonetsk and trying to encircle the garrison of that city. They are preparing for an offensive on Sloviansk in the north of Donetsk region. In Kharkiv and Kherson regions, the Russian Federation is trying to hold its positions. Missile strikes are carried out against infrastructure and military depots throughout Ukraine.

On the afternoon of June 13, a missile strike was launched against the town of Pryluky in Chernihiv region. As a result of the fire that broke out as a result of the strike, the evacuation of several villages around the town was announced.

Artillery shelling of the border areas of Chernihiv and Sumy regions from Russian territory also continued. During June 13-15, 1 civilian was killed and 6 people were injured on the territory of Sumy region.

In the east of Kharkiv region, Russian troops are securing the flank of the strike group, which is preparing for the final offensive against Sloviansk in the Donetsk region. They are trying to disrupt the logistical support system of the Ukrainian Armed Forces’ units operating in the area. To the north of Kharkiv, the Russian military is concentrating its efforts on the maintenance of the taken lines. In order to prevent the Armed Forces of Ukraine from entering the state border, they carry out local counterattacks.

Fighting for Sievierodonetsk continues in Luhansk region. The head of the Luhansk Regional Military Administration, Serhii Haidai, reported the destruction of all bridges that lead to the city and were used to supply Ukrainian units and provide humanitarian aid. In addition, Russian troops continue to destroy infrastructure and enterprises. In particular, they hit chemical industry facilities (“Azot” and “Skloplastyk”) and destroyed the premises of the regional State Emergency Service.

In the Donetsk region, Russian troops are concentrating their efforts in the direction of the Sloviansk-Kramatorsk agglomeration. They are trying to gain a bridgehead on the southern bank of the Siverskyi Donets River north of that city. They are also advancing from the side of Popasna near Bakhmut to encircle Ukrainian units fighting in the Luhansk region.

The Russian military is launching intensive strikes against populated areas in the Donetsk region, using a variety of weapons, including supersonic air-to-ground missiles. As a result of the shelling in the region, 7 civilians were killed and 19 people were wounded between June 13 and 15. Shelling also continues on the front line in Zaporizhzhia region.

Shelling of the Dnipropetrovsk region continues. Russian troops are using Uragan multiple rocket launchers in this direction. At least 5 civilians were killed as a result of the shelling. In addition, missile strikes were launched into the region, destroying a construction enterprise.

The Armed Forces of Ukraine counterattack in the Kherson direction, launching artillery strikes against Russian troop positions and their rear infrastructure. The Russian military strengthens its defenses in this area by mining the banks of the Inhulets River.

Russian troops are attempting to launch missile strikes in the Odesa region from the territory of temporarily occupied Crimea. Shelling of Mykolaiv continues — on June 15, an artillery strike in the city damaged a residential building, injuring 1 person.

Russian forces launch missile strikes against western regions of Ukraine. On June 14, an air defense system intercepted several missiles in Ternopil and Lviv regions. The downed missile damaged infrastructure in the Lviv region and 26 residential private homes; 6 people (including a child) were injured as a result.

The Ministry of Digital Transformation of Ukraine reports the continuation of the confrontation with the Russian Federation on the Internet. Between June 6 and 12, Ukrainian hackers attacked about 450 Russian online resources.

According to the UN Office of the High Commissioner for Human Rights, as of June 15, the number of civilian casualties in Ukraine since the start of the large-scale Russian invasion is 9,983 (4,452 killed and 5,531 wounded). As of the morning of June 15, over 892 children (313 dead, 579 wounded) suffered as a result of the armed aggression of the Russian Federation in Ukraine.

The process of returning the bodies of fallen Ukrainian fighters is underway. On June 14, the bodies of 64 fallen Azovstal defenders were returned as a result of the exchange.

The humanitarian situation in the temporarily occupied territories remains precarious. According to estimates by the Donetsk Regional State Administration, more than 22,000 civilians may have died in Mariupol as a result of hostilities, and 50,000 have been deported to the Russian Federation. The city’s housing stock was 90% destroyed; all hospitals, kindergartens, and schools were damaged or destroyed. The city still lacks a stable supply of water, electricity and gas.

Michelle Bachelet, the UN High Representative for Human Rights, has expressed concern over the forced deportation of Ukrainian children from the war-torn eastern regions of the country to Russia for adoption. The Commission of Inquiry on Ukraine, created at the request of member states by the UN Human Rights Council, has stated that there are a significant number of children missing from the temporarily occupied territories, including from children’s institutions. The Russian side has repeatedly stated that amendments to current legislation could be made to facilitate the prompt adoption of orphans from Ukraine. According to UNICEF, before the full-scale Russian invasion on February 24, there were more than 91,000 children in Ukrainian orphanages, boarding schools and other children’s institutions. UNICEF believes that adoptions should never take place during or immediately after emergencies, and that children separated from their parents during a humanitarian emergency should not be considered orphans.

The occupation administration in Donetsk sentenced to death three foreign nationals (two Britons and one Moroccan) who had served in the Armed Forces of Ukraine and had been captured in Mariupol. The UN Office for Human Rights condemned this decision, calling such trials against POWs a war crime. It called for the combatants to be granted international protection and treated in accordance with the Geneva Conventions.

Demining of the liberated territories of Ukraine is ongoing. Of the 1,017 de-occupied settlements, 377 have been fully demined. After the liberation of previously occupied territories, citizens of Ukraine may be in danger from camouflaged explosive devices left behind by Russian troops. On June 15, 2022, 3 people were killed in the Sumy region as a result of a car explosion on a mine left by Russian troops.

The Russian side continues to hold civilians captive. For more than 2 months, at least 33 volunteer drivers, who were detained while trying to transport civilians out of the war zone, have been held captive. The Russian party accuses them of “terrorism” and wants to imprison them for 5 to 10 years.

According to the National Bank of Ukraine, the fall of Ukraine’s GDP has slowed down — the economic decline in May decreased to 35-40% compared to the same period last year. In March this year the rate of economic decline reached 44%.

Ukraine’s partners are trying to overcome the food crisis caused by Russia’s blockade of Ukrainian ports. The first ship with a cargo of Ukrainian corn arrived in Spain and was loaded in Poland. The U.S. is working with the EU to export grain from Ukraine by rail. Implementation of this plan is complicated because of differences in the width of railroad tracks and requires construction of additional grain storage facilities at the Ukrainian border. However, such routes cannot fully replace exports via Ukraine’s Black Sea ports.

The EU governments have confirmed that they will consider providing Ukraine with temporary storage facilities for grains to help preserve the harvest and ensure future deliveries to world markets.

According to Ukrainian Energy Minister Herman Halushchenko, the hostilities on the territory of the state destroyed almost 5% of generating capacities in the energy sector of Ukraine. Another 35% of capacities are currently located in the occupied territories (about 1/2 of thermal capacities, 1/3 of solar and over 90% of wind generating capacities are out of operation). At the same time, the rates of decline in gas production today amount to 12-15%.

On June 15, the Ukraine Defense Contact Group “Ramstein-3” met in Brussels and was joined by about 50 countries. At the end of the meeting, participants agreed to provide Ukraine with additional weapons to counter Russian aggression. Ukrainian Defense Minister Oleksii Reznikov reported that Ukraine will receive combat helicopters from Slovakia and missile ammunition for them, as well as artillery from Canada, Poland and the Netherlands. Germany will give Ukraine three MARS multiple rocket launchers with guided ammunition. Ukraine will receive a new $1 billion military aid package from the United States, which will include anti-ship missile systems and ammunition.

Officials from partner states continue to come to Ukraine, showing support for the Ukrainian people in the fight against the aggressor. Ukrainian President Volodymyr Zelenskyi met with visiting Prime Minister of the Republic of Albania Edi Rama and Prime Minister of Montenegro Dritan Abazović. Also the Prime Minister of Northern Macedonia Dimitar Kovačevski expressed his support for Ukraine in a video message. During the meeting the parties adopted a joint statement of support of Ukraine’s candidate status for membership in the European Union. Thus, it was publicly announced that the Western Balkans have no objection to Ukraine becoming part of the European community.

The President of Ukraine maintains an active dialogue with his partners. In recent days, Volodymyr Zelenskyi has had talks with Canadian Prime Minister Justin Trudeau, Dutch Prime Minister Mark Rutte, British Prime Minister Boris Johnson and US President Joseph Biden. The parties discussed Ukraine’s defense needs, threats to food security, Ukraine’s European path, and coordination of further steps to counter Russian aggression. Volodymyr Zelenskyi also spoke with Ecuadorian President Guillermo Lasso and Guatemalan President Alejandro Giammattei, thanking the leaders for their principled position on condemning Russian aggression and imposing sanctions against Russia. In addition, the head of state delivered an online address to both chambers of the Czech Parliament. He invited the Czech Republic to take part in the reconstruction of Ukraine through patronage of one of the Ukrainian regions that suffered from Russian military aggression.

With seaports blockaded, Ukraine’s economy is highly dependent on stable logistics on its western borders. On June 14, the European Commission agreed on the final text of the EU-Ukraine Special Agreement on the Liberalization of Road Transport. The signing of this Agreement will abolish the need for carriers to obtain relevant permits on a permanent basis.