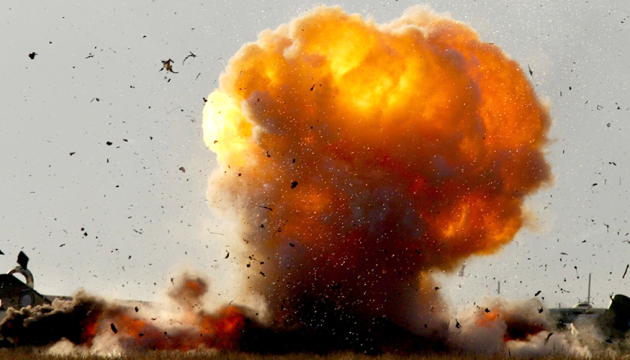 The battle of attrition continues near Sievierodonetsk in the Luhansk region. Russian forces continue to attack the Ukrainian Armed Forces positions in the city itself, while trying to encircle the Ukrainian garrison through an offensive near Bakhmut. They are also preparing for an offensive against Sloviansk in the north of the Donetsk region. In other parts of the front heavy artillery fire continues. Ukrainian forces are trying to improve their positions in the Kherson region.

On the night of June 9, a missile strike was launched against the town of Novhorod-Volynskyi in the Zhytomyr region. According to preliminary information, the missile was fired from Belarusian airspace.

The Russians continue mortar and artillery shelling of the border areas of the Sumy and Chernihiv regions. They also use kamikaze drones to attack border villages in Sumy.

The Russian army keeps shelling the territory of Kharkiv and nearby populated areas in an attempt to stop the advance of the Armed Forces of Ukraine to the state border. This leads to damage to infrastructure and civilian casualties. In particular, on the night of June 12, Russian troops shelled the buildings of a recreation camp in the Chuhuiv district. During June 9-12, at least 9 people were killed and 25 civilians were wounded in Kharkiv region.

In Luhansk region, fierce fighting is ongoing in Sievierodonetsk. Russian troops continue to storm the city. As of June 11, about a third of the city remained under the control of the Armed Forces of Ukraine. As a result of the fighting and shelling, significant destruction is taking place in Sievierodonetsk itself, where the Ice Palace was destroyed, and in other populated areas in the region (in particular, the second major town in Ukrainian-controlled territory in the region, Lysychansk, where a six-year-old child died as a result of shelling on 12 June). In temporarily occupied Kadiivka, the Ukrainian military destroyed the PMC Wagner military base, which was housed in the local stadium.

Continuing street battles in Sievierodonetsk, the Russian military are trying to cut off the city’s supply routes and encircle the Ukrainian troops there. According to Serhii Haidai, head of the Luhansk Regional Military Administration, they have already destroyed two of the three bridges leading into the city. Also, Russian troops do not leave attempts to take control of the “road of life” between Bakhmut and Lysychansk in order to prevent humanitarian aid and military reinforcements from reaching Sievierodonetsk.

Russian troops are regrouping and resupplying before resuming their offensive toward Sloviansk in northern Donbas. They have now achieved local success by continuing to consolidate near Sviatohirsk and attempting to force the Siverskyi Donets.

In other parts of the front in Donetsk and Zaporizhzhia regions, Russian troops continue intensive shelling using various types of weapons. In particular, in Svitlodarsk, Russian troops launched an artillery strike on the territory of the Vuhlehirsk thermal power plant, the largest thermal power plant in Ukraine. Fierce fighting continues for the facility. At least 8 civilians were killed and 20 wounded on the territory of the region in the period of June 9-12.

On the night of June 10, Russian troops launched a missile strike on the territory of the Dnipropetrovsk region. They also shelled another district in the east of the region, using cluster munitions.

Russian forces are strengthening their positions in this direction, building the second and third lines of defense and reinforcing roadblocks near bridges over the North Crimean Canal. They also continue shelling in the Krivyi Rih direction.

The Russian military deployed additional air defense systems on the temporarily occupied Zmiinyi island. Thus, they are reinforcing their positions in the northwestern part of the Black Sea, where the blockade of Ukrainian seaports continues.

On the evening of June 11, Russian troops launched a missile attack on a military facility and surrounding area in the town of Chortkiv in the Ternopil region. According to preliminary information, 23 people were injured as a result, 10 of whom remain in hospital.

According to the Office of the UN High Commissioner for Human Rights, as of June 10, the number of civilian casualties in Ukraine since the beginning of the large-scale Russian invasion is 9,585 (4,339 killed and 5,246 wounded). As of the morning of June 12, more than 795 children (287 killed, 508 wounded) were affected by the armed aggression of the Russian Federation in Ukraine.

The process of exchange of bodies of dead servicemen between Ukraine and Russia is underway. On June 12, as a result of two exchanges, Ukraine received the bodies of 220 Mariupol defenders killed at Azovstal.

In the zone of active hostilities, the humanitarian situation remains highly difficult. Numerous towns in Luhansk and Donetsk regions are subjected to constant shelling and destruction of civilian infrastructure; in many of them it is impossible to specify the exact number of civilian deaths due to intensive shelling and active hostilities. The recent destruction of two of the three bridges across the Siverskyi Donets River connecting Sievierodonetsk to the rest of the controlled territory jeopardizes the ability to evacuate civilians and deliver humanitarian supplies.

On June 11, Russian occupation forces began distributing the first Russian passports to residents of seized Melitopol in Zaporizhzhia region. A similar pattern is observed in occupied Kherson — the so-called “handing out” of passports is used, among other things, to create propaganda materials for Russian television.

Minister of Healthcare Viktor Liashko reported that Russia is blocking the supply of medicines from Ukraine to the temporarily occupied territories. The destruction of medical infrastructure is also ongoing. Since the beginning of the war, Russian troops have completely destroyed 115 hospitals, while another 672 health care facilities have been damaged. According to preliminary information, at least 12 medical personnel were killed and 47 were seriously injured as a result of the shelling. The actions of the Russian Federation demonstrate a deliberate creation of conditions in which the civilian population of Ukraine has no access to adequate humanitarian and medical care in the temporarily occupied territories.

The UN Independent International Commission of Inquiry on Crimes of Aggression by the Russian Federation arrived in Ukraine. This demonstrates the serious attention of the international community to the need to punish the perpetrators of war crimes.

In Vilnius, on the initiative of First Lady of Ukraine Olena Zelenska and First Lady of Lithuania Diana Nausėdienė, the first in the European Union Ukrainian Center for citizens forced to leave Ukraine was opened. The Ukrainian center will be a place of education, career guidance, psychological help and recreation for children, youth and adults.

Explosions were recorded in the temporarily occupied cities of southern Ukraine. In particular, there were several explosions in the city of Berdiansk on the morning of June 12. According to preliminary information, an electrical substation was damaged. There were also explosions in Melitopol near the building of the so-called law enforcement authorities of the occupation administration. The circumstances of the incidents are being clarified — it cannot be ruled out that they were the result of the occupation resistance movement.

At the June 10 meeting of the Cabinet of Ministers, Prime Minister of Ukraine Denys Shmyhal announced that the government presented a new wartime economic strategy for Ukraine, under which the state will launch 8 programs aimed at creating jobs through business support, state order, construction, lending and recruitment of the unemployed. In particular, the program will include non-refundable grant aid for small and medium-sized businesses, support for Ukrainian producers and construction of new infrastructure.

Finance Minister Serhii Marchenko stated that Ukraine has already started preliminary talks with the IMF on a new aid package. The format in which it will be provided is currently under discussion.

Ukraine continues to calculate the damage caused by Russian aggression. According to the State Statistics Service, Ukraine’s GDP decreased by 15.1% on an annualized basis during the first quarter of 2022. The KSE Institute estimates that the Russian invasion has already caused $11.5 billion worth of damage to Ukrainian businesses. The actions of the Russian Federation have also caused considerable damage to the Ukrainian agricultural sector. According to the Ministry of Agrarian Policy, the harvest in Ukraine will decrease by 35-40% next year. According to Ukrmetallurgprom, Ukraine’s production of iron, steel and rolled steel in the first five months of 2022 decreased by an average of 47% year-on-year.

In the run-up to the EU summit on June 23-24, the process of discussing the prospects of granting Ukraine candidate status in the union is in its final stage. The leaders of the European Parliament’s factions called for granting such status to Ukraine and Moldova. The head of the European Commission, Ursula von der Leyen, arrived in Kyiv on 11 June and met Ukrainian President Volodymyr Zelenskyi. The Ukrainian president thanked the EU for financial aid, called for a seventh package of sanctions against Russia and noted that Ukraine expects a positive decision on granting candidate status for membership.

International leaders continue to visit Ukraine, showing full support for the territorial integrity and independence of the state. This refers not only to demonstrative visits, but also to working trips by officials directly responsible for practical aspects of support for Ukraine. On June 10, British Minister of Defense Ben Wallace arrived in Kyiv and met with Ukrainian President Volodymyr Zelenskyi. They discussed further provision of British military aid to Ukraine and the prospects for unblocking Ukraine’s Black Sea ports.

Volodymyr Zelenskyi continues to inform the world community and political elites about the situation in Ukraine. The head of state took part online in the Asian security summit “Shangri-La Dialogue”. Zelenskyi condemned Russian imperialist aspirations, and called on the world to actively counter the intentions of the Russian Federation and to consistently expand sanctions against the aggressor.

Prime Minister Denys Shmyhal met with German Federal Minister of Food and Agriculture Cem Özdemir. The parties discussed the development of Ukrainian small and medium-sized businesses and Ukraine’s candidacy in the EU. A key aspect of the visit of German politician was the issue of preventing a global food crisis and the resumption of exports of Ukrainian agricultural products by sea.

Due to concerns about the global food crisis resulting from Russia’s blocking of Ukrainian grain exports, interested states are trying to mediate the issue. On June 12, Turkish President Recep Tayyip Erdogan announced negotiations with the leaders of Ukraine and Russia to organize a corridor for grain exports from Ukraine. A few days earlier, France declared its readiness to take part in the operation to unblock the port of Odesa. Meanwhile, the German federal government plans to create a fund for the purchase of grain containers in order to speed up grain exports from Ukraine under the sea blockade.

The Russian Federation continues to resort to aggressive rhetoric in the international arena in an attempt to justify its territorial claims against its neighbors. Vladimir Putin’s statements about the events of the Northern War (the capture of Narva by Russian troops of Peter the Great) are perceived in Estonia as an undisguised threat to Estonia’s territorial integrity. In the Russian State Duma, a bill appeared on the abolition of the resolution of the State Council of the USSR “On Recognition of the Independence of the Republic of Lithuania”.

Ukrainian President Volodymyr Zelenskyi signed a decree enacting a decision of the National Security and Defense Council to impose sanctions against 35 individuals responsible for Russian aggression against Ukraine, including Vladimir Putin. Meanwhile, the international community also continues to increase pressure on Russia. On June 10, the Swiss Federal Council decided to join the new EU sanctions against Russia and Belarus (embargo on crude oil and some oil products from Russia; ban on the provision of audit and business consulting services). It also became known that the Swiss Federal Department of Economics, Education and Research extended financial and visa sanctions to about 100 people.