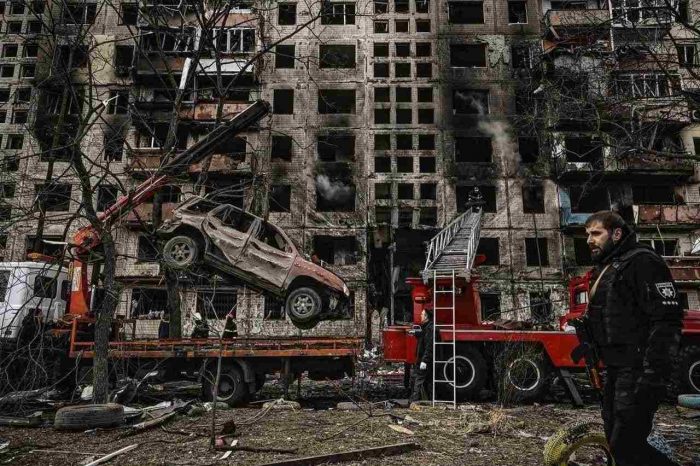 Total combat losses of Russian troops from February 24 to March 14 are estimated at over 13,500 men, over 389 tanks, 1,866 armored vehicles and  automotive equipment  and 167 aircraft (planes and helicopters). Russian forces continued to concentrate their main efforts in the direction of Mariupol, Donetsk direction, try to encircle Mykolaiv and advance towards Kryvyi Rih.

On March 14 at 05:09, an artillery shell hit a nine-story apartment building in the Obolonsky district of Kyiv and partially destroyed the building. Two people were killed, three more were hospitalized. Also, a factory of the state-owned Antonov aircraft manufacturer was shelled.

At about 11:00, a Russian cruise missile was shot down over Kyiv. Debris fell on Kurenivka, killing 1 person and injuring 6.

On March 14, the Russian military shelled one of the convoys of civilians evacuated from Hostomel in the Kyiv region.

On the night from March 14 to 15, several explosions were heard in Kyiv in different parts of the city. A Russian shell hit a high-rise building in the Podolsky district, resulting in a fire from the first to the fifth floor. According to preliminary information, one person was hospitalized. A two-story house in the Osokorky district was also damaged by the shelling. Data on the victims is being verified.

Once again, the Russian military damaged the power transmission line that supplies power to the Chornobyl nuclear power plant and the town of Slavutych after Ukrenergo workers resumed power supply to the town and ChNPP on March 13. The power supply was subsequently resumed. From March 9 to 14, the Chornobyl nuclear power plant operated on diesel generators.

On March 13, Russian troops carried out a targeted airstrike in populated areas of Chupakhivka and Olenynske in the Okhtyrskyi district (Sumy region) against agricultural equipment storage sites. As a result of the strike, all the equipment, including more than 30 units, was destroyed. The Main Directorate of Intelligence of the Ministry of Defence of Ukraine reported that Russian troops were actively destroying agricultural equipment to prevent the start of the sowing campaign and the subsequent humanitarian food crisis.

The Russian military destroyed the National University “Chernihiv Polytechnic” during an overnight airstrike. Also, the aggressors bombed one of the pumping stations of the Chernihivvodokanal. According to preliminary data, 4 people were killed. In addition, shells hit the Pryvokzalny market, a wholesale and retail base, several residential buildings, the administrative building of JSC Chernihivgas and 4 vehicles. A total of 10 people were killed as a result of the shelling of Chernihiv on March 14, according to preliminary information.

On the night of March 14, Russian troops carried out an aerial bombardment of the private sector of Okhtyrka and residential buildings, killing at least 3 people.

When Russian occupation troops shelled the village of Olyshivka (Chernihiv region), a shell hit a building on the territory of an underground gas storage facility.

During the night of March 14, Russian aggressors increased the intensity of shelling in Kharkiv region. The regional center continued to be shelled from Russian territory with Iskander missile systems. Russian troops struck residential areas of the city, destroying a four-story building in the historical center, which was a monument of architecture.

Russian Armed Forces troops bombed a bridge near Kamianske. There is no transport connection between Enerhodar and Zaporizhzhia.

Russian troops destroyed sewage treatment plants in Vasylivka (Zaporizhzhia region). Without the functioning wastewater treatment facilities at the Vasylivka water supply and sewage pumping station, wastewater from the city will enter the Dnipro River without purification.

In the Donetsk direction, Russian troops attempted to break the defense of the Ukrainian Armed Forces units. During the repulsion of the offensive, the Russian Armed Forces units lost up to 100 personnel, two tanks,three infantry fighting vehicles and one armored personnel carrier, after which they retreated.

On March 14, 20 people were killed and 28 others wounded in the center of Russian-occupied Donetsk as a result of falling rocket parts.

As a result of a missile strike by Russian troops on a TV tower in the village of Antopil in Rivne region 9 people died, 9 others were injured.

In Zaporizhzhia region, residents of towns temporarily occupied by Russian troops continue to gather for protests against the invaders. Prymorsk residents marched through the city center in the morning. At noon, the residents of Berdyansk came out for an action of resistance against the aggressors.

The residents of Melitopol continued to gather for protests. However, on March 14, the Russian military cordoned off the central square of Melitopol and prevented the residents from going to the rally; two activists were kidnapped and taken to an unknown location.

About a thousand residents of the village of Bilozerka near Kherson came out in the morning for a peaceful rally against the Russian occupiers and did not allow a column of enemy equipment to pass.

The Ministry of Defense of Ukraine began using the facial recognition system of the American company Clearview AI. It has access to a database of 10 billion photos, 2 billion of which are from the VKontakte network.

In Zhytomyr region, hackers attacked the website of the regional council and posted a fake message about the evacuation. In the Odesa, Cherkasy, Volyn, Vinnytsia and Zhytomyr regions, cyber attacks were already conducted against local government websites.

On the 19th day of the war, Russian aggressors continue to fire on civilians and infrastructure.  On March 14, at 9 am, 10 humanitarian corridors were opened in Ukraine to evacuate people from settlements affected by shelling by the Russian army.

Hundreds of thousands of civilians have been blocked by Russian troops in Kyiv, Mariupol and Volnovakha in the Donetsk region without food, water, medical care or other means of subsistence. Thousands of civilians killed in constant shelling, including attempts to evacuate through pre-arranged humanitarian corridors, have already fallen victim to Russia’s blockade of Mariupol. More than 160 private cars managed to leave Mariupol on the way to Berdyansk after the corridor was opened on March 14.  The humanitarian cargo with food, water and clothes did not reach Mariupol.

The Russian military has taken the abducted mayor of Melitopol, Ivan Fedorov, to occupied Luhansk, where he is accused of “terrorism.”

Russian aggressors fired on 15 settlements in the Donetsk region, at least two people were killed, information about the dead and wounded is being clarified.

The Heads of Government of Ukraine, the Republic of Poland and the Republic of Lithuania adopted a joint declaration condemning the unprecedented, brutal, unprovoked military invasion of Ukraine.  The parties called on the international community to continue to increase pressure on Russia, in particular by further strengthening a tough, consistent and long-lasting sanctions policy. Poland and Lithuania are in favor of “immediate” granting Ukraine the status of a candidate country for EU membership. This is stated in a joint statement of the Lublin Triangle.

The Parliament of the Republic of Estonia has called on UN member states to close the skies over Ukraine.  This is the first decision from the parliament of a country that is a member of the EU and NATO. Estonian parliamentarians have called for an immediate comprehensive trade embargo on the Russian Federation and Belarus, which would limit the potential of aggressor states to wage war.

The EU  has approved a fourth package of sanctions against Russia over the war in Ukraine. The new sanctions are aimed at individuals and legal entities involved in the aggression against Ukraine, as well as several sectors of the Russian economy.  In addition, the EU ambassadors also approved a statement to the WTO on Russia’s aggression against Ukraine, which calls for the abolition of the benefits enjoyed by Russia as a member of the organization, and the termination of Belarus’ application to join the WTO.

The United Nations will provide an additional $40 million in humanitarian aid to Ukraine and form a response team to address the effects of the war on the world economy.

In the eighteen days of the Russian army’s armed invasion of Ukraine, the world community has already imposed 3,612 restrictive measures against Russia.

The Czech Republic is suspending the issuance of all visas, except humanitarian, for Russian citizens, said Prime Minister Petro Fiala.

Israel has stated that although it will not join sanctions against Russia, it will not allow its territory to be used as a way to circumvent sanctions.

Chinese stocks in Hong Kong fell by nearly $ 2.1 trillion amid reports of Chinese military aid to Russia, a record since the 2008 crisis.

A number of international companies join the initiative of universal and gradual isolation of Russia: