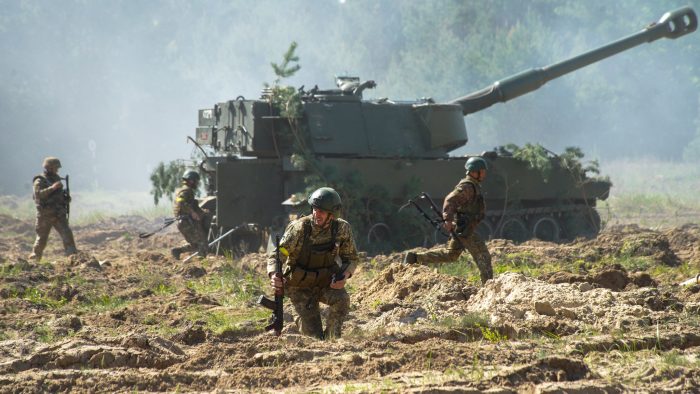 The main efforts of Russian troops are directed at capturing the territory of Luhansk region. Fighting continues in the region for Sievierodonetsk, the central city of a large industrial agglomeration. Russian forces managed to advance in the north of Donetsk region near Sviatohirsk. In other parts of the front, shelling continues to hinder the actions of the Ukrainian Armed Forces.

Russian troops continue to fire mortars at the border areas of Sumy and Chernihiv regions. In the Sumy region, a hit in the premises of the State Border Guard Service of Ukraine was recorded.

Russian troops are shelling the territory of Kharkiv region, which keeps causing casualties among the civilian population of the region. On June 7 alone, 5 civilians were killed and 12 were wounded in the Kharkiv region.

In the Kharkiv region, the Russian military continue to hold the occupied positions. In the east of Kharkiv region, they resumed their offensive from the Izium area. Its goal is to advance into the rear of the Ukrainian units that are defending in the Donetsk region.

The situation in Luhansk region remains extremely tough. The Russian army continues to focus its main efforts on trying to establish full control over the town of Sievierodonetsk, where street fighting continues, as well as on blockading the Armed Forces of Ukraine in Lysychansk.

Russian forces are advancing in northern Donbas from two directions, towards Bakhmut (from the east) and Sloviansk (from the northwest). There are records of their advance toward Sviatohirsk, near which one of Ukraine’s largest church sanctuaries, Sviatohirsk Lavra, is located. In other parts of the front, Russian troops are shelling Ukrainian military positions and settlements in order to restrain the actions of the Ukrainian Armed Forces. Air force is actively used for strikes. Between June 6-8, at least 8 civilians were killed and 23 wounded in the region.

Shelling continues in the Zaporizhzhia region, leading to the destruction of civilian infrastructure.

The shelling of civilian infrastructure in the Mykolaiv region is ongoing. According to preliminary information, at least 1 person was killed as a result of shelling in Mykolaiv on 6 June. On the night of 7 June, 2 people were killed in the town of Bashtanka. Also, the shelling continues on the front line in the Kryvyi Rih direction, where the Russian troops use MLRS.

The fight in cyberspace is underway. According to the Ministry of Digital Transformation of Ukraine, hackers have attacked more than 600 Russian resources (Internet providers, media and information systems) since the beginning of June, including the Kommersant FM radio station, where unknown persons launched Ukrainian music and anti-war songs into live broadcasts.

According to the Office of the UN High Commissioner for Human Rights, as of June 8, the number of civilian casualties in Ukraine since the beginning of the large-scale Russian invasion is 9,444 (4,266 killed and 5,178 wounded). As of the morning of June 8, more than 741 children (263 killed, 478 wounded) suffered as a result of the armed aggression of the Russian Federation in Ukraine.

The process of returning the bodies of dead Ukrainian military personnel is underway. On June 8, there was a “50 for 50” exchange of bodies between Ukraine and Russia. Of the 50 Ukrainian defenders, 37 were Azovstal defenders. The Defense Ministry’s Main Intelligence Directorate reported that 210 bodies of fallen Mariupol defenders had already been returned to the controlled territory.

Deputy Healthcare Minister Mariia Karchevych indicated that since late February, more than 600 healthcare facilities in Ukraine have been damaged as a result of hostilities. The World Health Organization (WHO) found that Russian attacks on Ukraine’s health care system from February 24 killed at least 76 people and injured another 59. Such actions by the Russian military deprive people of access to basic medical care.

The humanitarian situation in temporarily occupied Mariupol remains catastrophic. There is a lack of medicine and doctors in the city. Therefore, any infectious disease can turn into a deadly epidemic; the biggest threat is an outbreak of cholera. According to the mayor’s advisor Petro Andriushchenko, people in the city do not have enough food and drinking water. There is no stable supply of water, light and gas. According to preliminary estimates, about 22,000 people were killed in Mariupol, but the number may be growing due to exhaustion and disease. It is impossible to verify the exact number of civilian casualties due to the lack of full access of international humanitarian organizations to the occupied city.

Enerhoatom, national nuclear energy generating company of Ukraine, continues to report kidnappings in the occupied city of Enerhodar, Zaporizhzhia region. Over the past week alone, Russian military forces detained and transported to an unknown location about 20 residents, 11 of whom are employees of the Zaporizhzhia NPP. This creates additional pressure on the facility’s personnel and threatens the safe functioning of the plant.

The Ministry of Finance of Ukraine stated that it would leave the military bond rates fixed, despite the National Bank’s increase in the discount rate to 25%.

The National Bank of Ukraine reported that Ukraine’s international reserves decreased by 7% during May and stood at $25.1 billion as of June 1. The reduction was due to the sale of currency on the interbank foreign exchange market, and was partially offset by funding from international partners.

The World Bank has approved additional funding of $1.49 billion for Ukraine. They will be aimed at paying salaries to state and social workers.

The World Bank has downgraded its inflation forecast in Ukraine. According to the Bank, by the end of 2022 it will be 20%.

Prime Minister Denys Shmyhal informed that during the sowing campaign in Ukraine it was possible to sow 75% of the last year’s area. He said that the sowing campaign, given the difficult conditions, was successful. However, the organization of harvesting and transportation remains a problem.

On 8 June, the European Parliament adopted a resolution recommending that the EU grant Ukraine candidate status for accession. MEPs also expressed their position on granting weapons to Ukraine. The resolution concerns the EU’s foreign, security and defense policy after Russia started a full-scale invasion of Ukraine.

The British government has allocated additional aid to the International Criminal Court investigating war crimes in Ukraine. London is sending a special legal and police investigation team to Ukraine. In addition, the aid package provides for constant analysis and monitoring of events in Ukraine and training for the Ukrainian police in war crimes investigations.

Arms deliveries to Ukraine from partners are underway. On June 6, British Prime Minister Boris Johnson announced that his state would hand over multiple rocket launchers to the Armed Forces of Ukraine to effectively counter Russian aggression. Poland signed a defense contract with Ukraine worth PLN 2.7 billion (about $650 million) for the sale of Krab self-propelled artillery systems to Ukraine. Norway confirmed the transfer of 22 M109 self-propelled artillery systems and their ammunition to Ukraine.

Ukraine’s partners are gradually imposing additional sanctions against Russia at the national level. On June 8, the Canadian government announced new restrictions on a number of services to the Russian oil, gas and chemical industry. The Canadian Foreign Ministry stressed that the government, in coordination with its partners, will continue to work on further extending the sanctions against Russia. Japan also introduced additional sanctions. Two Russian banks (Credit Bank of Moscow and Russian Agricultural Bank) and one Belarusian bank (Belinvestbank) were included in the new sanctions package of the state. In addition, the Japanese government decided to increase the amount of aid to Ukraine by $500 million, and an additional agreement was signed. The New Zealand government imposed new restrictive measures against 44 state-owned enterprises of Russia and Belarus because of the large-scale invasion of Ukraine. They concern companies that produce weapons and develop military technology.

The negotiation process aimed at unblocking Ukrainian seaports and creating a safe corridor for the export of Ukrainian agricultural products blocked by the Russian military is ongoing. The issue has global significance because of the threat of a world food crisis. A Turkish-Russian meeting was held on this issue at the level of foreign ministers in Turkey. The sides discussed the mechanism of solving the problem by involving the UN. According to Ukraine’s ambassador to Turkey Vasyl Bodnar, specific agreements were not reached at the meeting, and Ukrainian-Turkish consultations on the issue will continue.