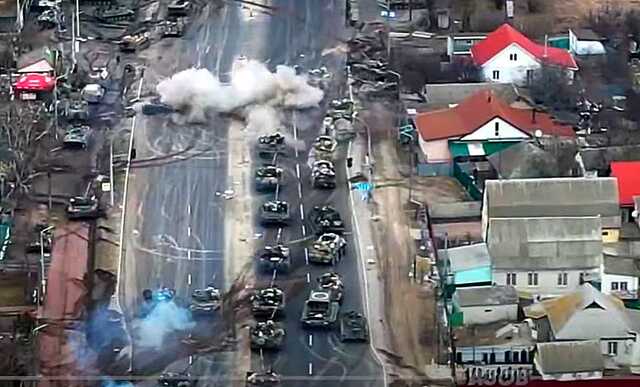 Total combat losses of the Russian troops from 24.02 to 11.03 were estimated at over 12,000 servicemen, over 353 tanks, 1,723 pieces of armored vehicles and automotive equipment and 140 aviation units (planes and helicopters). Since the start of the war, 31 battalion tactical groups of Russian troops out of 111 deployed on the territory of Ukraine have already lost their combat effectiveness. Kyiv and Mariupol remained the main directions for the Russian army, as well as advances from the south towards Kryvyi Rih, Kremenchuk, Nikopol and Zaporizhzhia.

On the morning of March 11, Russian troops fired an Iskander missile at Baryshivka, damaging 5 apartment buildings and 10 private homes.

The Russian Armed Forces continued firing at Chernihiv throughout the day. As a result of the shelling, the stadium in Chernihiv was destroyed. Also, houses in the nearby residential sector were destroyed or severely damaged.

Heavy fighting was taking place throughout the day in the town of Izyum (Kharkiv region).

In the morning, Russian air forces carried out an air raid on the city of Mariupol. For the first time, the Russian Armed Forces dropped a 1,000 kg TNT equivalent aerial bomb in the city of Mariupol. The bomb was dropped in the center of the city to destroy civilian infrastructure and prevent further evacuation of civilians from the combat zone.

On March 11, Russian troops kidnapped Melitopol city mayor Ivan Fedorov. This qualifies as a war crime under the Geneva Conventions and Additional Protocol I, which prohibits  taking civilian hostages during war.

Near Mykolaiv, around the village of Huryivka in Novoodesky district, active hostilities took place in the evening between the Armed Forces of Ukraine and units of the Russian Armed Forces. The Russian troops were defeated.

In Mykolaiv, the aggressor shelled the city with heavy artillery, a cancer hospital came under fire.

The State Emergency Service of Ukraine reported that around 06:10, three airstrikes struck the city of Dnipro. In particular, there were hits near a kindergarten, an apartment building, and a hit on a shoe factory.

Tu-95MS strategic bombers used air-launched cruise missiles on targets (military airfields) in the cities of Lutsk and Ivano-Frankivsk. The city of Lutsk was shelled for the first time and Ivano-Frankivsk for the second time after the outbreak of war.

Residents of Zaporizhzhia region continued to hold rallies against the Russian occupation of their towns. In particular, protests were held throughout the day in Prymorsk, Melitopol and Berdyansk, as reported by local Internet resources.

At 14:30, Russian planes took off from the Belarusian border and struck Ukrainian troops. The villages of Horodychi and Tumen (Rivne region, on the border with Belarus), after which they turned around and inflicted fire damage on the village of Kopani (Belarus). This provocation was intended to drag the Armed Forces of the Republic of Belarus in a war with Ukraine. It also became known about the shelling of Bukhly and Verkhny Terebezh localities near the Belarusian side of the border.

Computer emergency response team of Ukraine (CERT-UA) detected the distribution of fake emails on behalf of Ukrainian government agencies with instructions to improve information security. Launching the downloaded file in the email results in the Cobalt Strike Beacon malware infecting the computer.

Mariupol and Volnovakha remained completely blockaded. During 12 days of blockade of the city and ruthless shelling of residential areas, Russian troops killed 1,582 Mariupol civilians. In addition, 86 Turkish citizens, including 34 children, were sheltering in Mariupol on the territory of a mosque.

Neighboring villages north of Kyiv, such as Ivankiv, Sukachi, Sphyli, Orane, Dytiatky, Bolotnya, need a “green corridor”. In Ivankiv alone, about 10,000 people were being held hostage. There was no electricity, water, or food in the town, and the Russian military was robbing local residents.

In Kharkiv, about 350 houses were left without heating due to the shelling.  As of 18:00 on March 11, since the beginning of active hostilities here in the Kharkiv region, a total of 201 civilians were killed, including 11 children.

Russia has thwarted an evacuation from the city of Izyum in the Kharkiv region.  The city is left without electricity, heat, water and communications.

In Chernihiv, the water supply network was damaged during the night strikes.

More than 50,000 subscribers are left without electricity in Sumy Region, 9,000 of whom are residents of Sumy District.

According to UNICEF, the number of children who left Ukraine to escape the war exceeded 1 million.

Australia became the fourth country to decide to impose an embargo on Russian energy.  The Australian government has decided to ban the import of oil, petroleum products, natural gas, coal and other energy sources from Russia.

By 2027, the European Union plans to phase out Russian energy, including oil, gas and coal.  This was announced by European Commission President Ursula von der Leyen at the end of a two-day EU summit in Versailles.  She also announced the fourth package of EU sanctions against Russia.  The focus will be on banning investments in Russia’s energy sector, depriving Russia of trade privileges, hindering Russia’s loans to the World Bank and the IMF, banning imports of key goods from Russia’s metallurgical sector, and exporting luxury goods from the EU to Russia.

On March 11, Great Britain imposed sanctions on 386 deputies of the Russian State Duma, who voted for the recognition of the independence of the Russian-occupied territories of Donbass.

The Canadian government has imposed sanctions on 32 organizations and companies linked to the Russian military and security services, including Russia’s foreign intelligence service.

The European Union plans to allocate a new tranche of 500 million euros for military aid to Ukraine, European Foreign Minister Josep Borrell said on Friday.  In total, Ukraine’s budget received $ 1.4 billion and € 700 million from international partners during the week.