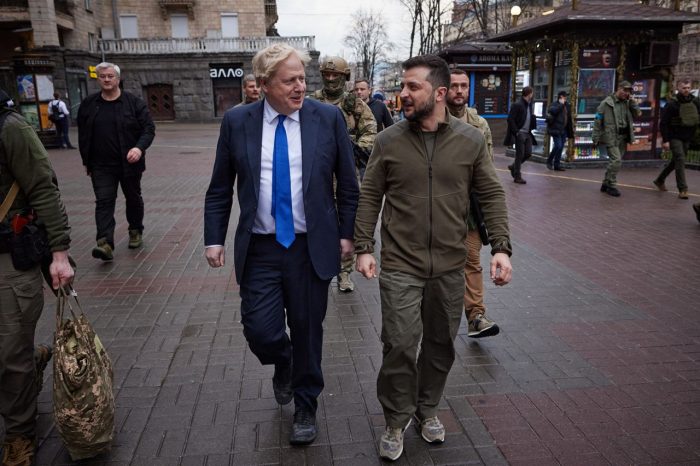 Russian forces are concentrating their efforts to seize Mariupol and are trying to break through the defense of the Ukrainian Armed Forces near Izium. Rocket attacks on civilian targets across Ukraine are ongoing.

The head of the Kharkiv Regional Military Administration, Oleh Syniehubov, informed that the toughest situation in the region remains in the Izium direction, where Russian troops continue their offensive in order to reach the rear of the Armed Forces of Ukraine units located in Donetsk and Luhansk regions. During April 8, Russian troops launched about 50 artillery, mortar, tank and MLRS strikes against Kharkiv and the surrounding area (Derhachi city). In Kharkiv, the infrastructure of the Saltivka, Kholodna Hora, Oleksiivka, and KhTZ districts was hit the hardest.

According to Serhii Haidai, head of the Luhansk Regional Military Administration, Russian troops are storming Rubizhne and Popasna while simultaneously shelling residential neighborhoods in other towns. As a result of the April 9 shelling, 1 person was killed in Sievierodonetsk and 4 more people were wounded in Rubizhne. Also, a cistern with nitric acid was damaged near Rubizhne. In the morning of April 10, shelling continued in Sievierodonetsk — 2 multistory buildings and a school building were damaged.

In the Donetsk region, Russian troops, supported by aircraft, are trying to capture the central part of Mariupol. The General Staff of the Armed Forces of Ukraine reports air strikes on the settlements of Vuhledar and Novoselivka Druha. According to Donetsk Regional Military Administration, 4 people were killed in Vuhledar during the day; 4 more were wounded. Also, 1 person was killed in Novomykhailivka village; 1 person was wounded in Krasnohorivka.

Ivan Arefiev, a representative of the Zaporizhzhia Regional Military Administration, reported that Russian troops continue shelling populated areas in the Zaporizhzhia region that are close to the front line (along the Kamianske-Orikhiv-Huliaipole-Malynivka line).

Dmytro Lunin, head of the Poltava Regional Military Administration, stated that Russian troops launched a missile attack on infrastructure in Myrhorod (Poltava region) on the night of April 8-9. 2 people were wounded.

The mayor of Chornomorsk in Odesa region, Vasyl Huliaiev, reported an explosion in the city. According to preliminary information, there were no casualties.

According to the Operational Command “South”, Russian troops launched 7 missile strikes in the Mykolaiv region.

According to the General Staff of the Armed Forces of Ukraine, in the town of Nova Kakhovka in the Kherson region, the Russian military is using the capacity of local printing houses to prepare propaganda materials for the so-called “referendum on the establishment of the Kherson People’s Republic.”

Iryna Vereshchuk, Minister for the Reintegration of the Temporarily Occupied Territories, reported that 4,532 people had been evacuated through humanitarian corridors on April 9. 3,425 people (192 Mariupol residents, 3,233 residents of Zaporizhzhia region) left Mariupol and Berdiansk in their own vehicles and buses for evacuation to Zaporizhzhia. They also managed to free the buses seized by the Russian military and evacuate 529 residents of Melitopol. 578 people were evacuated from Luhansk region.

As of April 8, the Office of the United Nations High Commissioner for Human Rights recorded 4,149 casualties among the civilian population of Ukraine. 1,766 people were killed and 2,383 injured. According to juvenile prosecutors, more than 500 children were injured in Ukraine (176 were killed; 324 were injured).

Minister for Reintegration of the Temporarily Occupied Territories Iryna Vereshchuk reported on the exchange of prisoners. 12 Ukrainian servicemen (including 1 woman) and 14 civilians (including 9 women) were released from Russian captivity.

The Commissioner for Human Rights of the Verkhovna Rada of Ukraine Liudmyla Denisova said that a torture chamber of the Russian military was found on Yablunska Street in Bucha (Kyiv region). She indicated that according to Bucha city authorities, at least 360 civilians, including 10 children, had been killed in the city. The exhumation of 67 bodies from the places of mass burial of people killed by Russian troops continues in Bucha. Oleksiy Kuleba, the head of the humanitarian headquarters of the Kyiv region, reported that most of them had gunshot and shrapnel wounds.

The head of the Dmytrivka community, Taras Didych, said that between the villages of Myla and Mriia in the Kyiv-Sviatoshynskyi district of the Kyiv region, about 10 cars with people had been shot dead by the Russian military; a mass grave with civilians was found in the village of Buzova. In the Chernihiv region, near the villages of Yahidne and Lukashivka, the SES found the bodies of executed people on the territory of the Ascension Church, where the Russian headquarters was located during the temporary occupation.

Verkhovna Rada Commissioner for Human Rights Liudmyla Denisova confirmed new information about the circumstances of the death of Lithuanian director Mantas Kvedaravičius in Mariupol. He was taken prisoner by the Russian military, who later shot him.

The Ombudsman’s Office currently has information on more than 15,000 cases of missing persons in Ukraine. This makes it difficult to determine the exact number of dead. According to Liudmyla Denisova’s information, the Russians are collecting the bodies of dead Ukrainians in Mariupol and then burning them in a mobile crematorium.

The Zaporizhzhia administration reported information about civilians who were held hostage by the Russian military from March 14 to April 9. A total of 106 people were captured. Of these: 63 people continue to be held hostage, 43 people were released. Among those abducted were 21 local government officials (11 released) and 2 journalists (1 released).

Also in the morning of April 9, the Russian military in Kherson kidnapped the former head of the Kherson Regional State Administration Andrii Putilov.

Minister of Health Viktor Liashko said that since the beginning of the full-scale invasion of Ukraine, 307 health care facilities have been damaged, 21 hospitals have been completely destroyed.

Taras Melnychuk, a representative of the Cabinet of Ministers in the Verkhovna Rada, said that Ukraine had imposed a full trade embargo against Russia.

According to Deputy Chairman of the NBU Serhii Nikolaichuk, by the end of the war the National Bank will keep the official exchange rate frozen at UAH 29.25 per dollar.

According to the Prime Minister of Ukraine Denys Shmyhal, the state has allocated 18 billion hryvnias for the purchase of food, medicine and building materials for people in the temporarily occupied territories and territories where hostilities are taking place. Due to this, it is planned to distribute 12 million humanitarian packages.

The IMF has agreed to create a special account to direct financial assistance from donor countries to support Ukraine. The special account is a tool for transferring donor resources in the form of grants and loans to help Ukraine. The NBU says that this money will be used primarily to meet the needs of the balance of payments and the state budget to stabilize Ukraine’s economy.

The President of Ukraine Volodymyr Zelenskyi held talks with the Prime Minister of the United Kingdom Boris Johnson, who arrived in Kyiv on a visit. He informed Johnson on the state of the Ukrainian-Russian negotiation process, and stressed the importance of providing Ukraine with security guarantees. Johnson assured that the United Kingdom will increase sanctions pressure on Russia, affect Russia’s ability to use its energy resources and provide economic and defense-military assistance to Ukraine. It is reported that Ukraine may receive 120 armored vehicles and anti-ship missile systems from the United Kingdom.

Thanks to the international action Stand Up For Ukraine, organized by European countries, Canada, the Gulf countries and famous artists, we managed to raise 10.1 billion US grants and loans. These funds will be used to support internally displaced persons and refugees from Ukraine. As part of the campaign, the European Investment Bank is preparing a €4 billion financing program to support EU countries that accept Ukrainian refugees. According to the project, the program should work in 2022 and 2023, and will help EU cities and regions to meet urgent investment needs and address issues related to the reception and integration of displaced persons from Ukraine.

The EU Embassy resumes its work in Kyiv.