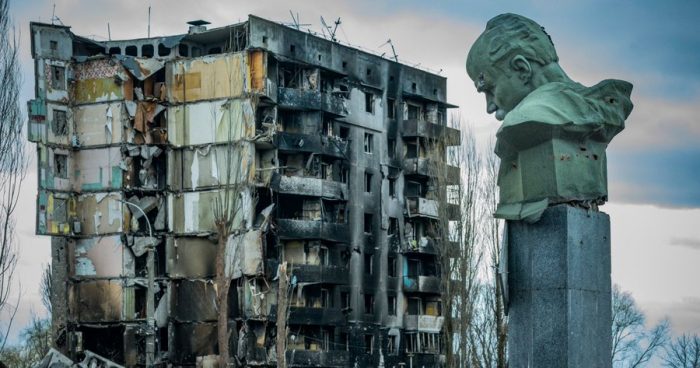 Russian forces are concentrating their efforts on an offensive near the town of Izium and attempts to break through the defense in the Donetsk and Kharkiv directions. There remains a possibility of missile and air strikes from the territory of Belarus against military and civilian infrastructure in Ukraine.

Oleksandr Hruzevych, Deputy Chief of Staff of the Ground Forces Command of the Armed Forces of Ukraine, reported that 16 Russian sabotage and reconnaissance groups had been uncovered in Kyiv in recent days.

According to the head of the Sumy Regional Military Administration, Dmytro Zhyvytskyi, the Sumy region has been entirely liberated from Russian troops. Demining work is currently being organized on the territory of the region.

Russian troops continue to concentrate forces to the east of Kharkiv, in the Izium and Kupiansk directions, where they are using the railroad to redeploy units.

According to Oleh Syniehubov, head of the Kharkiv Regional Military Administration, Russian troops continue to deliberately shell residential areas and civilian infrastructure in Kharkiv. During April 7, 14 people were injured and one woman was killed as a result of the shelling of the city and its surroundings.

Russian aviation struck the overpass near Barvinkove station, which carries rail traffic to Kramatorsk and Sloviansk. As a result, 3 evacuation trains were temporarily blocked.

Russian troops continue their offensive to take control of Rubizhne and Popasna. According to the General Staff of the Armed Forces of Ukraine, fighting is taking place near the settlements of Nyzhnie, Novotoshkivske, Zolote and Borivske. During the day, Lysychansk, Sievierodonetsk, Novodruzhesk and Toshkivka were shelled. Artillery shelling of Popasna also continued.

Russian troops storm Mariupol. Shelling in other parts of the front in Donetsk region injured 3 people (in Marinka, Vuhledar, and Sloviansk).

Microsoft Corporation declared that it had thwarted plans of hackers linked to Russian military intelligence to attack the network infrastructure of Ukrainian institutions, including the media. It was reported that a group of Strontium hackers used seven Internet domains to spy on government agencies and think tanks in the EU, the USA and Ukraine.

Minister for Reintegration of the Temporarily Occupied Territories Iryna Vereshchuk reported that 4,676 people were evacuated by humanitarian corridors on April 7. 3,256 people (1,205 from Mariupol and Berdiansk and 2,050 from Zaporizhzhia region) reached Zaporizhzhia by their own transport and buses. It was possible to evacuate 1,420 people from the Luhansk region.

The mayor of Melitopol, Ivan Fedorov, reported continued kidnappings of local residents (including teaching staff of educational institutions) by the Russian military. More than 100 people are already in captivity.

The Federal Intelligence Service (BND) of Germany published new evidence of the genocide in Bucha. The intercepted records of BND show that the killing of civilians was a deliberate action aimed at spreading fear and suppressing resistance. The mayor of Bucha, Anatolii Fedoruk, indicated that some 320 bodies of local residents killed during the occupation had been collected around the city. At present, 163 of the dead have been identified.

The mayor of Irpin, Oleksandr Markushyn, spoke about the crimes committed by Russian troops in the city, which included shooting civilians, raping women and looting. Anton Herashchenko, adviser to the Minister of Internal Affairs of Ukraine, informed that about 200 people are now missing in Borodianka. As of the morning of 8 April, rescue services retrieved the bodies of 26 dead residents from under the rubble of only two destroyed houses.

A similar pattern is observed in other regions of Ukraine. According to the Kharkiv regional prosecutor’s office, during the occupation of the village of Husarivka in the Izium district, Russian soldiers tortured 3 local residents and then tried to burn their bodies. The crimes in the temporarily occupied Kherson region are reported by the head of the Kryvyi Rih Regional Military Administration, Oleksandr Vilkul. According to him, the Russian military shot up an evacuation boat on the Kakhovka reservoir. As a result, 4 people were killed, 7 were wounded, and 2 were missing.

Daria Herasymchuk, an adviser to the President of Ukraine on Children’s Rights and Rehabilitation, stated that the Russian authorities were preparing amendments to the legislation that would allow Russians to adopt Ukrainian children under a simplified procedure. This refers to children taken to Russia from the temporarily occupied territories. The official notes that such adoption is a violation of human rights and norms of the UN Convention on the Rights of the Child.

Russian troops continue to forcibly deport civilians from the conflict zone. The Mariupol City Council reported that the staff and patients of City Hospital №4 named after I.K. Matsuk were forcibly transferred from Mariupol to the temporarily occupied territory of Ukraine.

According to Prime Minister Denys Shmyhal, the total amount of Ukraine’s losses from Russia’s invasion, taking into account direct and indirect losses, will significantly exceed $1 trillion.

Minister of Finance Serhii Marchenko announced that Ukraine expects to receive about 7 billion euros in foreign financial aid during negotiations with partner countries, of which 3 billion euros have already been transferred to Ukraine.

The Ukrainian government supported the decision, which will allow trade networks to attract concessional loans of up to 1 billion UAH for a period of one year at a 5% rate.

Ukrainian President Volodymyr Zelenskyi addressed the Parliament of Cyprus. He called for cancellation of privileges that Russian citizens could enjoy in this state so far (in particular, the so-called “golden passports” and dual citizenship), as well as to give up Russian energy resources.

Speaking in the Greek parliament, Zelenskyi called on the state to use its influence and capabilities as an EU member to organize the rescue of Mariupol and its defenders; to cut off all Russian banks from the global monetary system; to close the ports for Russian ships; and to provide Ukraine with arms.

The European Parliament adopted a resolution calling for an immediate embargo on imports of Russian oil, coal, gas and nuclear fuel. In addition, the European Parliament recommends excluding Russia from the G20; disconnecting Russian banks from the SWIFT system; prohibiting vessels affiliated with Russia to enter EU territorial waters and ports. It is also recommended to introduce restrictions on Russian and Belarusian road haulage. The U.S. Congress also supported Russia’s oil and gas embargo, as well as ceasing trade relations with Russia and Belarus.

The U.S. Senate unanimously passed legislation authorizing President Joe Biden to use the lend-lease program to send weapons, ammunition and equipment to Ukraine. Congress must now also approve the legislation in order for it to go to the U.S. president for signature.

The U.N. General Assembly expelled Russia from the Human Rights Council amid revelations of evidence of crimes committed by the Russian military in Ukraine. The resolution expressed “grave concern over the ongoing human rights and humanitarian crisis in Ukraine” due to Russia’s actions.

The Parliament of Moldova approved amendments to the legislation, according to which the symbols and attributes used by the Russian troops during the invasion of Ukraine (St. George’s ribbon, as well as Z and V symbols) are prohibited on the territory of the state. Latvian Saeima designated May 9 this year as the Day of Remembrance for the Ukrainians killed in the war.

The embassies of Lithuania and Latvia resumed their work in Kyiv.