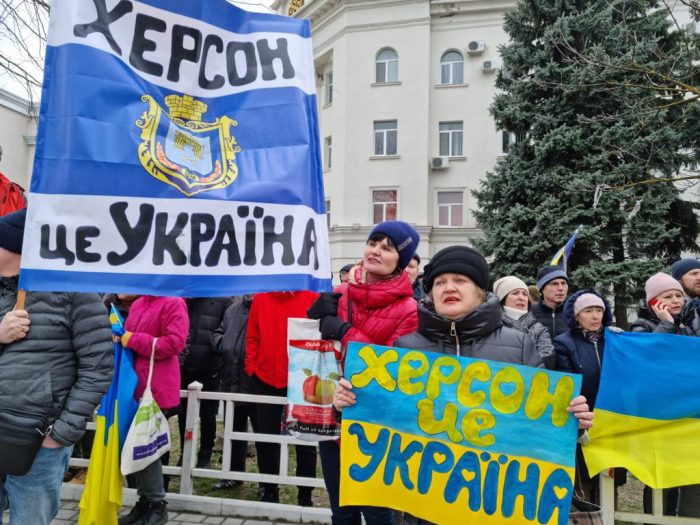 During the day, the Ukrainian side inflicted substantial damage to the personnel and equipment of the enemy troops: 4 helicopters, 5 aircraft and 1 UAV were shot down. Also, several air raids were carried out on columns of the adversary’s equipment. The losses are being clarified.

In the morning the enemy launched an aerial attack on a private sector in Bila Tserkva, damaging at least 15 private houses with elderly people and children. Evacuation by train was planned from Irpin, but Russian troops blew up the railroad tracks. All residents of the town were asked to proceed urgently to the Novoirpin highway, where evacuation to Kyiv was carried out by buses. A challenging situation prevails in Bucha and Borodyanka.

Near Chernihiv, the Ukrainian Armed Forces shot down Russian SU-34 attack aircraft that was on a combat mission to carry out air strikes on civilians. The military aircraft fell on a private house, and three high-explosive FAB-500 bombs were found in the private sector. Its residents are being evacuated for further munitions clearance.

In Mykolaiv, the units of the Ukrainian Armed Forces pushed the aggressor outside the city in the direction of Kherson and seized Russian military equipment. There are casualties among civilians. In Mykolaiv Region, marine units shot down four Russian helicopters.

Near Kharkiv, units of the Armed Forces of Ukraine have launched a counterattack and are holding their positions there, particularly in the direction of Chuhuiv and Vovchansk. This became possible due to the lack of organized reserves of the Russian Armed Forces, demoralization of the aggressor’s troops and not least due to the withdrawal of units from the temporarily occupied parts of Donetsk and Luhansk regions.

The village of Yakivlivka in the Kharkiv region was completely destroyed by the aggressors. Not a single house survived. There is no military facility in the area, only places of civilian residence.

The Russian Federation armed forces, ignoring the agreements to maintain the silence regime and create “green corridors” for the evacuation of the population and the supply of basic necessities, shelled the settlements of Volnovakha and Mariupol. The evacuation of civilians posed a risk, and residents of the towns were urged to find safe places to shelter themselves from the shelling. Evacuations have not been cancelled and will continue provided the silence regime is observed.

In the morning, Russian troops shelled the town of Rubizhne in the Luhansk region. They were aiming at power supply facilities. As a result, some power grids have been disrupted. There are power outages not only in Rubizhne, but also in Severodonetsk and Kreminna. Moreover, Popasna has been without electricity for a third day. Power engineers are trying to restore the networks.

Russian troops in temporarily occupied populated areas were planning to create a picture for their media about how Ukrainian citizens “greeted them as liberators,” following the 2014 templates from Crimea and Donbass. Nevertheless, in Kherson and Melitopol local residents came out in the central square for a rally against the Russian aggressors. The latter were trying to disperse the people with shots in the air, but they failed.

In Novopskov (Luhansk region), civilians came out for a peaceful protest in support of Ukraine. Russian troops, in turn, opened deadly fire on the protesters. Several citizens were injured.

Residents of Izyum (Kharkiv region) received messages demanding “to expel the criminal nationalists, ensure the normal functioning of the city’s infrastructure and prevent the blocking of roads.” The message said that city officials pledged to ensure conditions for the arrival of Russian troops. This is yet another provocation and unsuccessful attempt by the aggressor to break the resistance of the Ukrainians.

Despite the agreed regime of silence for the evacuation of civilians through the “green corridors” of Mariupol and Volnovakha on March 5, the aggressors opened fire with heavy artillery during the evacuation. According to a statement from the International Committee of the Red Cross in Ukraine: “As far as we understand, safe corridors from Mariupol and Volnovakha will not be open today. We continue to engage in dialogue with the parties on safe corridors for civilians from various cities affected by the conflict. Today’s events in Mariupol and other cities are tragic. ” Mariupol, a city of 400,000 people, has been under blockade by Russian troops for six days, with no electricity, water, heating or communications.

On March 5, a unit of the Rosguard (“Kadyrovtsy”) entered the territory of Borodyankivsky Psychoneurological Boarding School in Kyiv Region. They mined all ways to the boarding school and are now firing artillery at the positions of the Ukrainian army.  According to preliminary data, more than 600 patients are currently being held hostage in the facility, of which almost 100 are bedridden.  The wreckage of the rocket also damaged the building of the Okhmatdyt Children’s Specialized Hospital in Kyiv.  On the night of March 5, three children with gunshot wounds from the town of Bucha were to be taken to Okhmatdyt.  However, due to the continuous shelling of the Russian aggressors, the ambulance could not pick up the patients.  Two children died. The Lysychansk Regional Children’s Hospital was also shelled.

On March 5, 32 children had been killed and 70 wounded in Russian weapons.

In Trostyanets, Sumy region, the Russian occupiers set up headquarters and shoot at civilians if someone goes outside.

The city of Enerhodar is still under siege.  According to the first deputy mayor Ivan Samoidyuk, due to the Russian military aggression it is impossible to supply the city with any cargo.  The situation at the Zaporizhzhia nuclear power plant requires immediate intervention by international organizations.

The situation is also difficult in Melitopol, a city on the verge of a humanitarian catastrophe, products and medicines that are urgently needed to treat patients are running out.  The aggressors do not allow to open a humanitarian corridor.

During the meeting on March 5, the Minister for Foreign Affairs of Ukraine D. Kuleba and the US Secretary of State E. Blinken discussed the urgent strengthening of Ukraine’s defense capabilities (in particular, in the context of air defense).  The parties also agreed on mechanisms to ensure the effectiveness of economic sanctions against Russia, making it impossible to circumvent them.

At the same time, the Prime Minister of the United Kingdom B. Johnson in his address to world leaders proposed a “response plan to Russia’s invasion of Ukraine”, which includes the formation of an international humanitarian coalition, defense support for Ukraine, deepening sanctions on Russia.

The World Bank has prepared a $ 500 million loan to Ukraine.  Additional assistance in the amount of $ 200 million is being considered.

The Board of Directors of the European Investment Bank (EIB) has approved immediate financial support to Ukraine in the amount of 668 million euros.

The G7 countries have agreed on the need to abandon Russian gas.  The German cities of Dusseldorf, Cologne, Duisburg, and Neuss have terminated their partnership with Russian cities.  Cyprus has announced a ban on the mooring of five Russian Navy ships in the port of Limassol.  Cypriot ports will remain closed to Russian Navy ships as long as the war in Ukraine continues and European sanctions are in place.  Meanwhile, Poland has announced the creation of a center for documenting Russian war crimes in Ukraine.  Singapore is also imposing sanctions against Russia.  All financial institutions in Singapore will be prohibited from conducting operations or establishing business relationships with major Russian financial institutions, including VTB Bank, VEB RF, Promsvyazobank and Bank Russia.

Ukrainian diplomats are working to increase global pressure on Russia and are engaging the international community to help Ukraine.

-Visa and Mastercard payment services have announced that they will completely stop working in Russia and will stop all card transactions in the coming days.

– The international electronic payment system PayPal has stopped providing its services in Russia.

– Kering has announced the closure of boutiques of its brands in Russia.  The companies own luxury brands such as Gucci, Balenciaga, Bottega Veneta, Saint Laurent, Alexander McQueen, Brioni and Pomellato.

-The Association of European Professional Football Leagues has excluded the Russian championship from the organization.

– Samsung is suspending supplies to Russia.

– Cartier jewelry store has closed its stores in Russia.

– Coca Cola and Danone are leaving the Russian market.

– The Japanese corporation Hitachi has stopped production in Russia and exports of equipment to the country.

-The Marks & Spencer brand stops supplying its products to Russia, and also announces the transfer of money to the needs of Ukrainian refugees.

-The big publisher Electronic Arts stops selling games and content for Russia and Belarus.  The company owns the rights to such hits as FIFA22, Battlefield, Need for Speed ​​and more.

– Booking no longer works in the Russian market.

– IBM is one of the largest manufacturers and suppliers of hardware and software, as well as IT services and consulting services.

– PUMA sports company suspends all its stores in Russia.

– Russia and Belarus have been barred from participating in the International Union of Railways.

Due to dictatorial laws restricting freedom of speech and criminalizing the dissemination of allegedly “fake” information about the army, foreign broadcasters have stopped working with Russia:

– The British broadcaster BBC is temporarily suspending the work of its correspondents in Russia.

– The Canadian media CBS News and the Australian ABC News have also suspended work in Russia due to risks for journalists.

– Bloomberg has announced the suspension of work in Russia.

– The American television company CNN has announced the cessation of broadcasting in Russia.